Understanding the unique and sometimes confusing behaviors and characteristics of dogs plays a large part in our ability to own and care for them correctly. But sometimes, the things we read and hear about dogs are not at all true. In this list, we’ll reveal 10 common lies most of us have always believed to be true about man’s best friend. 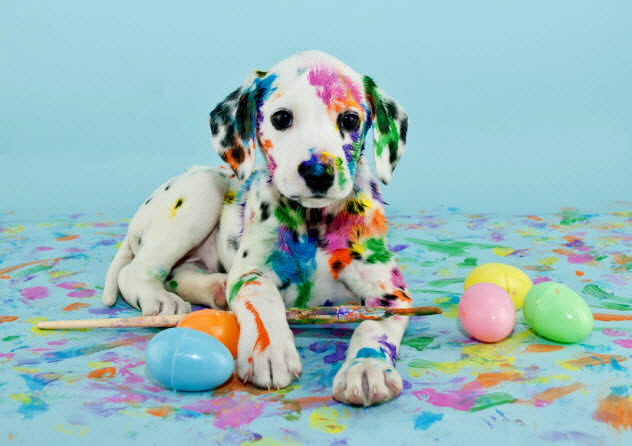 You’ve probably been told at least once in your life that dogs are color-blind, meaning they are only able to perceive black and white. This is, in fact, just a myth. Although a dog’s vision does not enable it to experience colors in the way that we do, they are able to see some colors.

Rather than a gray-scale spectrum, dogs tend to see more in yellows, blues, and violets. This means that colors available in the human spectrum of vision—such as red, green, and orange—are not accessible for canines.

In both humans and dogs, the photoreceptors in the retina contain rods and cones. However, what causes our vision to differ is the presence of a fovea (a minor depression in the retina) that gives us the ability to see with sharp visual detail. This isn’t present in dogs.

Nevertheless, dogs have some visual perks that we humans don’t. In the retina of a dog’s eye, there are more rods (the photoreceptors responsible for scotopic vision, which is vision in low light levels). This gives dogs superior night vision to humans.

9 When They Wag Their Tails, It Means They’re Happy 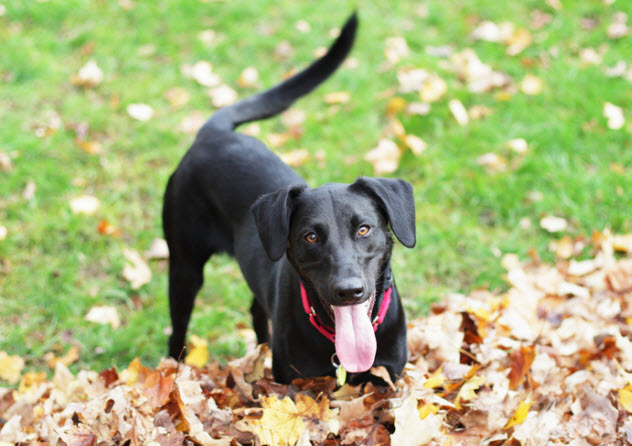 This one isn’t entirely false. When a dog wags its tail, it could indeed indicate happiness. However, this isn’t always the case. Unlike humans, dogs do not express emotions through their facial expressions. They use their tails for this.

The primary function of a dog’s tail is to communicate. In fact, learning what different movements indicate could help you to better understand your pet. Some gestures are relatively obvious. For example, a tail tucked between the legs shows fear.

But what about the wag?

If a dog is portraying happiness, its entire back body will generally sway with the tail. A dog whose tail is standing high and wagging slowly is actually indicating caution. If you are unfamiliar to the dog, this could be a warning sign to you to keep your distance.

If the tail is lowered and wagging frantically, this could suggest that the dog is about to run or fight (depending on the situation). Thankfully, this works the other way, too. Sometimes, when your dog’s tail isn’t wagging, he could just be relaxed.

8 The Larger They Are, The Longer They Live 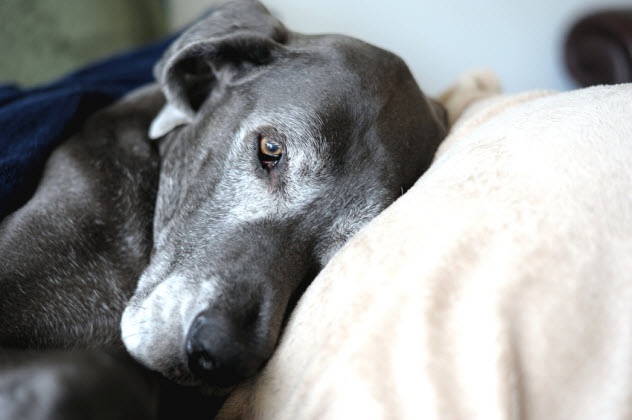 Scientists explain this trend by examining the use of energy. The body cells of larger mammals are slower and more efficient, meaning they last longer. So why is this trend reversed in dogs?

Sadly yet unsurprisingly, the decreased life expectancy of larger dogs is due to how they have been bred by humans over the years. Larger dogs grow rapidly in their first year. Great Danes (the largest dog breed) develop five times faster than humans. Due to this speedy growth, large dog breeds also age quickly, meaning that their lives are shortened. 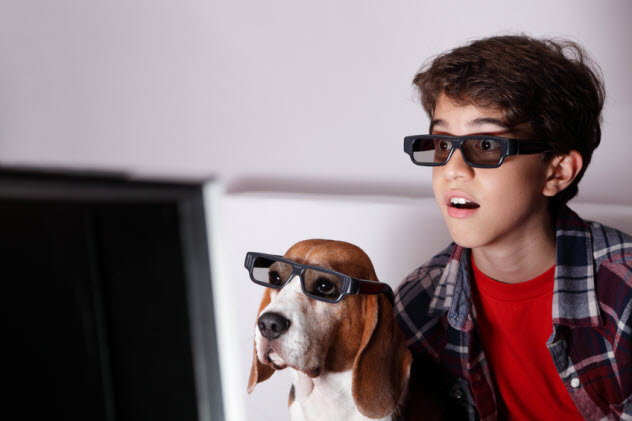 It is often thought that dogs are completely unable to perceive images on a flat-screen TV due to their different experience of vision. However, this isn’t exactly the case. CRT TVs (the old-fashioned kind) produce images at roughly 24 frames per second, which appears to us as a moving image. This is because we have a flicker fusion frequency (the number of frames we need to see in one second to perceive a film as continuous without flicker) of around 16–20 frames per second.

In dogs, this frequency is much higher, around 40–80 frames per seconds. When they watch a CRT TV, they will just see lots of flickering. But what about modern TVs?

The myth that dogs are unable to see images on a flat-screen TV is almost definitely false because the number of frames provided in one second is much higher than the rate produced by old-fashioned TVs. Also, there is definitive proof that dogs react to images on plasma TVs, proving that they are able to see something. 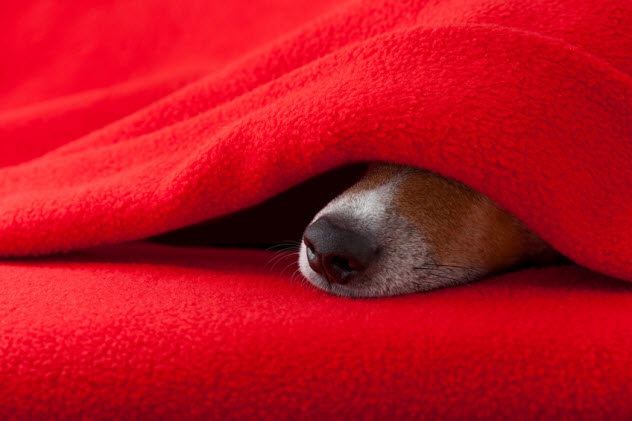 Whether dogs dream or not has been an ongoing question. Although there is still no definite answer, the evidence points strongly in the direction that they do. Dogs show REM (rapid eye movement) sleep, which is the type of sleep that we have when dreaming.

Dreaming is also linked with the process of laying down memories, which is something dogs have definitely proven the ability to do. So what about nightmares? For starters, we can’t be 100 percent certain that dogs are able to have nightmares, given that we don’t know if they dream at all.

For owners who witness their dogs whining and twitching in their sleep, it can be quite stressful leaving them when they appear to be uncomfortable. Many owners take it upon themselves to break the canine free of its supposed sleepy horrors.

However, this could actually be more stressful and harmful to the dog’s health. Like humans, dogs require a certain amount of deep sleep to ensure good mental health and normal development.

Dogs tend to nap between 14–16 hours every day, but very little of this is deep sleep. When a dog appears to be dreaming, it is most likely gaining some of that vital deep sleep it requires. Disrupting this sleep could actually be unhealthy for them.

5 If Their Noses Are Wet, They Are Healthy 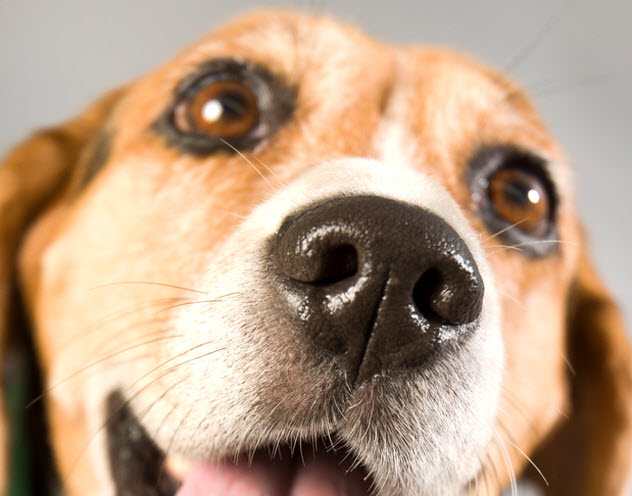 Actually, a dog with a warm, dry nose could be just as healthy as one whose nose is cold and wet. From day to day, the temperature and dampness of a dog’s nose will change. This could be due to their recent activity, environment, or possibly other factors.

The wetness and temperature of a dog’s nose is not in the slightest a valid or even reliable measurement of its health. A dog with a wet, cold nose could be suffering from a serious illness, just as a dog with a hot, dry nose could be.

If you ever catch your dog with a dry nose, don’t be concerned. He’s probably just been lying out enjoying the sun. So when should you be concerned about your dog’s health? More accurate suggestions of health issues are your dog’s drinking, eating, and behavior habits. If you notice a sudden change in their appetite or personality, you might want to get them looked at. 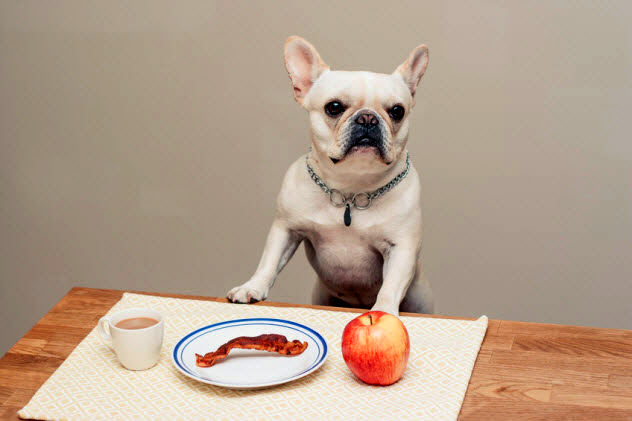 Although it is common knowledge that dogs should not be given chocolate, many people are unaware that many other human food products can harm dogs, too. Perhaps the most shocking in that collection is bacon.

For most people, it seems logical that bacon would be a decent treat to gift to your canine companion from time to time. After all, bacon is a meat and meat is an essential part of a dog’s diet.

However, bacon can actually be very harmful to dogs and possibly lead to long-term health problems. The rich levels of fat and grease in this pork snack can cause inflammation of the pancreas, which is referred to as pancreatitis. The pancreas is responsible for releasing digestive enzymes which ensure that the body is able to correctly absorb and digest food.

Pancreatitis diminishes the ability of the pancreas, meaning that it cannot function properly. This can lead to your dog digesting food incorrectly and becoming extremely ill. So the next time you look over your breakfast plate and catch your dog flashing his best puppy dog eyes at you with drool dripping from his lips, you’re better just to turn the other way. After all, you’ll be saving him in the long run. 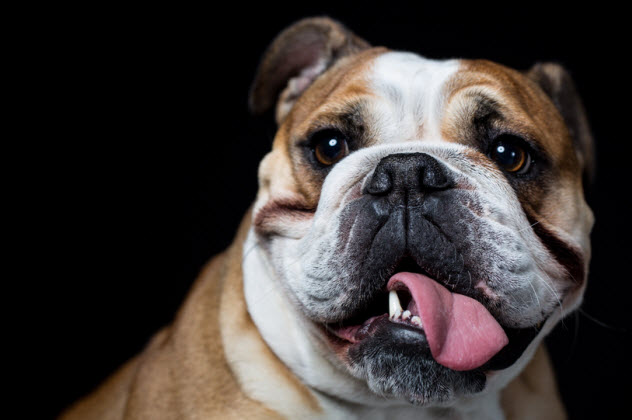 With its stocky shoulders, jutted-out jaw, and wrinkled skin, the English bulldog is probably one of the most distinguishable of all dog breeds. It is also associated with iconic British figures, most famously Winston Churchill.

Despite being such a famous breed, the English bulldog has a shockingly long list of health concerns compared with the average dog. One of the common risks with bulldogs is brachycephalic syndrome, a disorder found in dogs with short heads and narrowed nostrils. An obstructed airway causes dogs with this syndrome to constantly snort as they struggle to catch their breath.

Ironically, the English bulldog was bred to have this odd facial structure to improve its breathing for its early purpose. The English bulldog was primarily bred for the purpose of bull baiting. At the time, people believed that this tenderized the meat by thinning the blood of the animal.

This belief encouraged laws to be made in many areas of England stating that bulls had to be baited before being slaughtered. The short, flat skull of the bulldog actually helped him breathe when baiting bulls as he could maintain a firm grip on the bull while still being able to breathe through his nose. This design was completely intentional. Although the bulldog suffers today due its unique facial shape, the original purpose of this was actually to assist the dog.

2 They Enjoy Being Hugged 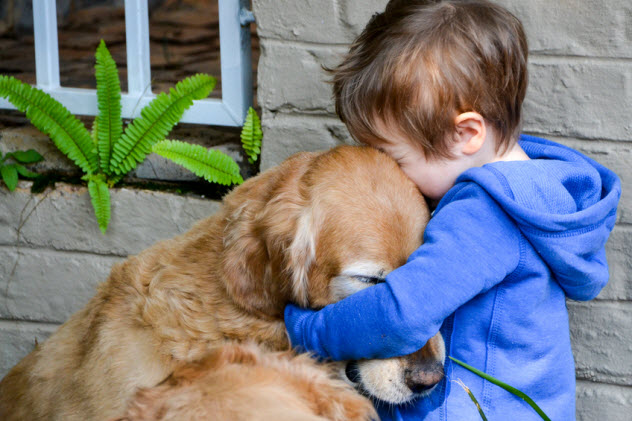 This fact is a little hard-hitting for dog lovers. Between humans, a hug is a loving, comforting gesture. Displaying that behavior to our dogs is just our way of showing them that we care.

However, dogs don’t quite interpret the act in the same way. To dogs, the positioning of a limb over the body is a showcase of dominance, which makes the dog under the limb feel anxious. This is the action we use when hugging. In our attempt to show our affection to our buddy, we’re actually portraying dominance in his eyes.

However, this isn’t true for all dogs. How your dog feels about a hug depends on his personality and interpretation of the action. If a dog has a nervous reaction to the gesture, he will demonstrate this by changing his body language.

The dog may become stiff, close his mouth, and maybe lick his lip. This is an obvious sign that he is confused by the action, probably wondering what he did wrong. But don’t worry. If your dog doesn’t like hugs, it won’t lower his opinion of you. Your dog still loves you. It’s commonly thought that the sole purpose of dogs eating grass is to allow themselves to be sick in order to purge something harmful from their stomachs. In actual fact, this is rarely the case. Less than 10 percent of dogs that eat grass appear to be sick.

Sometimes, dogs eat grass due to a condition called pica which causes animals to have cravings for anything containing nutrients and minerals they are lacking. Pica can also occur as a result of boredom, which can lead your dog to eating other bizarre things such as paint chips.

Other times, dogs eating grass may be due to territorial factors. Dogs may eat grass to taste who has been on their territory. A more simple explanation for the behavior, however, is just that dogs enjoy the taste of grass. Like we have specific tastes that we appreciate, dogs do, too. Grass may just be one of them. Either way, the idea that dogs only eat grass when they’re ill is a misconception.