The peanut butter industry has been thriving for decades. With a wide variety of brands, tastes, and textures, it is one of the most versatile foods on the market.

Due to a large assortment of culinary applications, peanut butter can be found almost anywhere. Some people would rather stick to the classic peanut butter and jelly sandwich, while others use the ingredient in everything they can, including ice creams, cookies, salads, soups, burgers, and even drinks.

Beloved by children and adults alike, peanut butter has stolen the hearts and stomachs of many cultures—especially in the US, which has been the main source of its popularity. 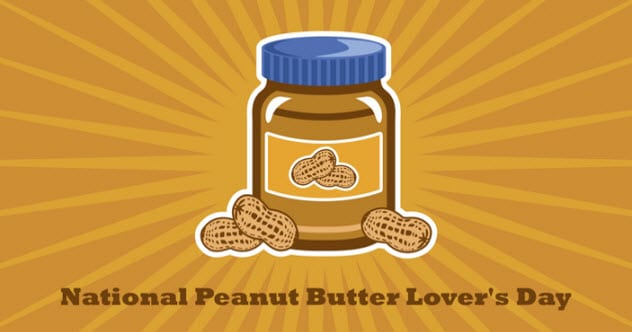 It seems like everything has a national day. There are over 1,500 national days, many of which celebrate a specific kind of food.

Although celebrating the people who eat peanut butter may seem ridiculous, it does have a few noteworthy lovers including Elvis Presley, Jerry Seinfeld, and Madonna. 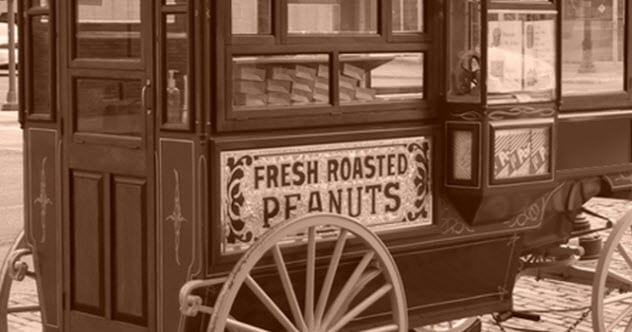 Peanuts are legumes, more closely related to peas and beans rather than nuts. Originating in South Africa, peanuts were introduced to Asia and Africa through Spanish explorers who had brought them back to Europe. In the early 1700s, peanuts were finally introduced to North America by Africans.

There is evidence suggesting that South American Incas were the first to make peanut butter by grinding the legumes. However, Dr. John Harvey Kellogg might have been the first inventor of the peanut butter we know and love today.

Kellogg started making peanut paste in the 1890s. His goal was to turn his patients into vegetarians by replacing meat with the high protein found in peanuts.

He and his brother, W.K. Kellogg, even patented a peanut butter process. The patent was granted in 1895 and described the food as “a pasty adhesive substance that is for convenience of distinction termed nut butter.” But the Kellogg brothers were more focused on their cereal brand instead.

Another American credited with the invention is a St. Louis physician who ground peanuts into a paste with his meat grinder around the same time. He came up with the idea while searching for a protein solution for patients with bad teeth who could not chew meat.

An owner of a food product company began producing the paste thanks to the physician’s suggestion. Peanut butter was officially introduced for the first time at the St. Louis World’s Fair in 1904. It was packaged and sold in barrels for roughly 6 cents per pound.[2] 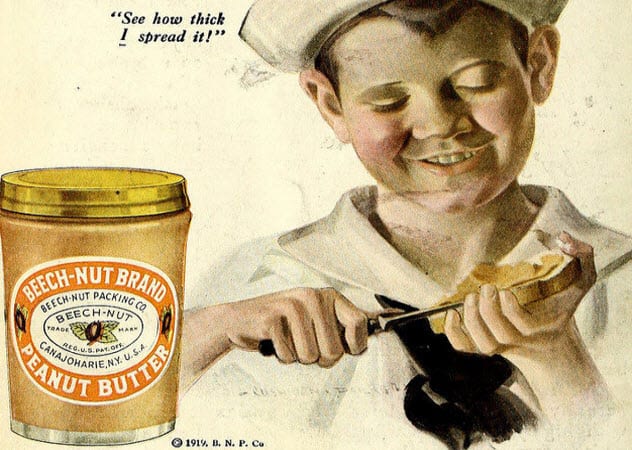 The rise of peanut butter’s popularity in the 1950s led to many poor-quality products. To cut costs, companies used hydrogenated oils instead of the more expensive peanut oil. And glycerin became a common sweetener.

The Food and Drug Administration (FDA) found that some products labeled as “peanut butter” only contained 75 percent peanuts. They proposed a 95 percent peanut standard in 1959, which the manufacturers fought against by stating that customers preferred the sweeter and more spreadable product.

Disagreements over consistency turned into the famous 12-year “Peanut Butter Case.” After a lot of haggling, manufacturers convinced the FDA to lower their standard to 90 percent. Although companies tried to counter with 87 percent, the FDA refused to budge.

The “Peanut Butter Hearings” began in 1965 after two postponements. Well-paid lawyers of major peanut butter manufacturers went up against the underfunded and understaffed FDA.

The battle over a 3 percent difference in peanut content took 20 weeks and more than 8,000 transcript pages. With the help of Ruth Desmond, a fierce consumer activist, the case swayed in the FDA’s favor.[3]

However, it took five more years until the US Appeals Court finally affirmed the 90 percent standard that is used to this day. The United States Department of Agriculture released their official standards for grades of peanut butter in 1972. Today, an average peanut butter jar contains roughly 540 peanuts. 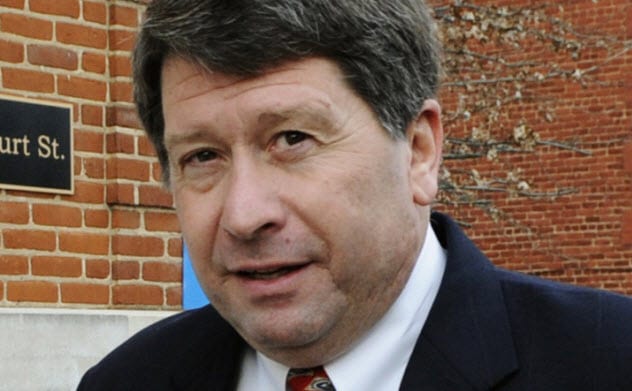 Stewart Parnell, the former CEO of the Peanut Corporation of America (PCA), was sentenced to 28 years in prison in 2015. The 61-year-old was charged with 72 counts of fraud, including knowingly shipping tainted food across state lines.

PCA was permanently shut down when one of the biggest Salmonella outbreaks in US history was traced back to their peanut butter products. The outbreak began in late 2008, killed nine people, and sickened at least 714 others.

It was the harshest criminal sentence ever seen in a food safety case. The contamination also led to the most extensive food recall in US history, with more than 3,900 different products manufactured with PCA ingredients.

According to former company employees, the PCA plant in southwest Georgia was filthy. Federal inspectors found dirt, mold, accumulated grease, roaches, rats, bird droppings, and a leaky roof. Animals and water in a peanut processing facility are big health hazards. Another facility was found in a similar condition.

Michael Parnell, the executive’s brother and food broker, received a 20-year sentence. And a five-year sentence was given to the company’s quality assurance manager.[4] 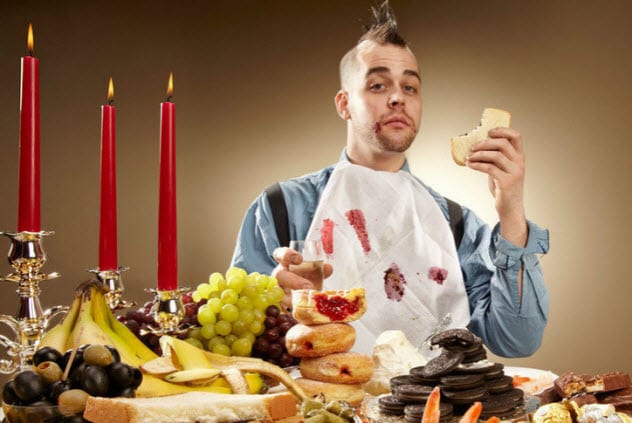 The bar is set far too high for many well-known world records. This has caused a massive increase in the number of oddly specific and niche records. The most sandwiches made in one hour might be one of them.

In September 2016, a group of roughly 1,350 volunteers made 49,100 peanut butter and jelly sandwiches in one hour—shattering the previous record of 39,303 sandwiches.

Volunteers primarily consisted of the students and faculty of Temple University in Philadelphia. It was all for a good cause. All the finished sandwiches were distributed among more than 15 food banks.[5]

Luckily for the students, Patrick Bertoletti did not take part in their world record attempt. This American competitive eater holds the world record for the most peanut butter and jelly sandwiches eaten in one minute. He earned the record in 2012 by consuming six sandwiches.

Another peanut butter eating record was achieved by Andre Ortolf in 2017. Although not a competitive eater, this German ate 378 grams (0.83 lbs) of peanut butter in one minute. But that is only one small step toward his goal of holding the most world records in the world. 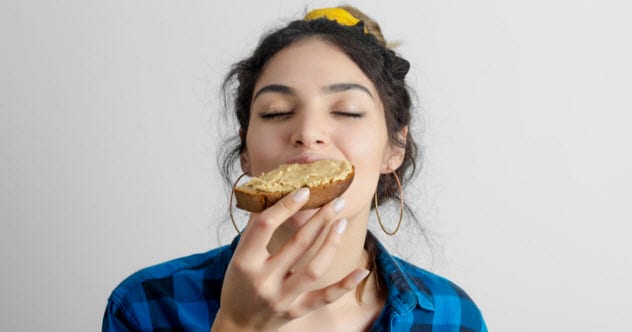 Thanks to peanut butter’s high peanut content, it is regarded as a healthy food when consumed in moderation.

It is a source of manganese, which activates enzymes used in the removal of toxic ammonia from your body, protects cells from physiological stress, breaks down nutrients, and contributes to tissue growth. One tablespoon of peanut butter contains 16 percent of the recommended daily manganese intake for women and 12.5 percent for men.

Peanut butter also contains niacin, which supports the metabolism with the breakdown of nutrients and promotes healthy cell development. Each tablespoon provides women with 14 percent and men with 15.5 percent of their recommended daily niacin intake.

Research also shows that peanut butter, peanut oil, and peanuts themselves assist in the prevention of chronic diseases such as diabetes, heart disease, and cancer. These products have lipid-lowering effects that assist in the reduction of inflammation.

However, everything becomes unhealthy when overconsumed and peanut butter is no exception. As an energy-dense food, it provides many calories in relatively small servings. The US Department of Agriculture recommends portion control and avoidance of processed peanut butter which contains added sugar and salt.

4 Can Be Life-Threatening To Dogs 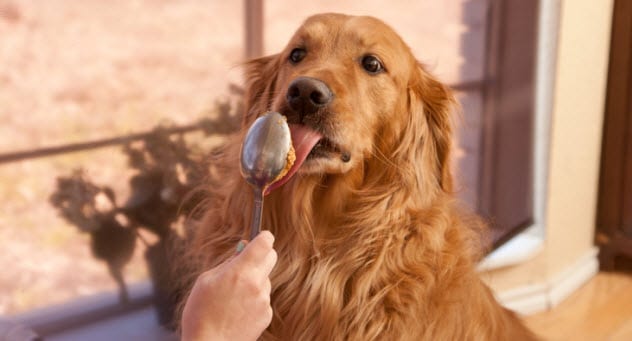 Most types of peanut butter are healthy for dogs in small doses. But some brands can be life-threatening. Xylitol, an increasingly popular sugar replacement, is used in over 700 products. While relatively harmless to humans, it is extremely poisonous for dogs.

Thousands of dogs are poisoned by xylitol each year. For them, the sweetener is around 22 times more toxic than chocolate. It takes only 1.37 grams of xylitol for a 14-kilogram (30 lbs) dog to experience disorientation, staggering, collapse, and seizures. At higher doses, it can lead to fatal liver cell destruction.

Xylitol is also used in some mints, ketchup, baked goods, ice cream, peanut butter, and many others. “All natural” products are not necessarily safe for dogs, either, because xylitol is a natural sweetener. Its popularity will probably continue to grow due to dental benefits and suitability for people with diabetes.[7]

For example, grapes can cause kidney failure in some dogs. Fried chicken can lead to pancreatitis. And raw meat is a common source of Salmonella, E. coli, and other harmful bacteria.

Peanut Butter and Jelly in Space

The popularity of peanut butter is out of this world. It is even consumed in space. Unlike standard peanut butter and jelly sandwiches, tortillas are used instead. Breadcrumbs are rarely an issue on Earth, but they can wreak havoc in a zero-gravity environment.

Bread also goes stale faster. Scientist Rodolfo Neri Vela already brought tortillas on a mission in 1985. But when Taco Bell developed tortillas with a longer shelf life in the 1990s, they quickly became a hit with astronauts and are commonly used by NASA today.

Shane Kimbrough also demonstrated the challenges of making PB&J in space. The tortilla is taped down while opening the jar, and Velcro is used to prevent the lid from floating away. As Kimbrough stated, “Everything will float around if you don’t manage it.”[8] 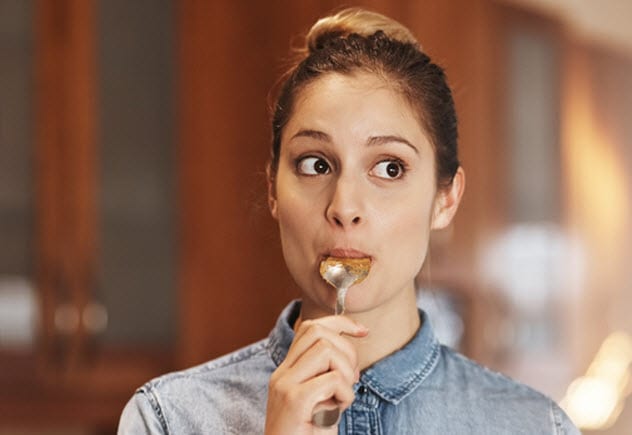 Arachibutyrophobia is an oddly specific phobia—the fear of having peanut butter stuck to the roof of your mouth. Typically, the phobia is rooted in a general fear of choking. It can also be related to the fear of sticky textures. Having more than one of these fears is common, but arachibutyrophobia can occur on its own.

Severity varies from person to person. Some people with arachibutyrophobia still consume a small amount of peanut butter. Others are scared of consuming any at all. In some cases, the fear extends to other peanut products as well, such as peanut sauces and peanut butter ice cream.

A part of the fear might also stem from peanut allergies. Watching someone go through an allergy attack because of eating peanut butter could create traumatic memories. Seeing someone choke on the thick paste could have the same effect. In fact, sandwiches are among the leading causes of choking incidents.

In severe cases, medicine can be prescribed. It does not cure the phobia but temporarily suppresses the symptoms. The phobia can be treated with psychotherapy, counseling, neuro-linguistic programming, and hypnotherapy. 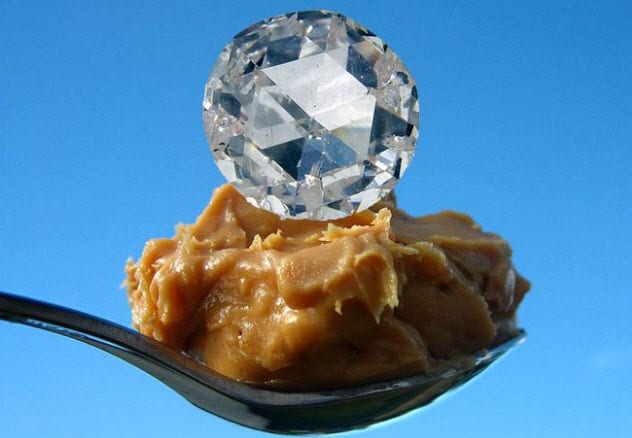 Dan Frost, a scientist at the Bayerisches Geoinstitut in Germany, tries to mimic the conditions of the Earth’s lower mantle. This involves crushing rocks at some of the highest pressures known to mankind and occasional minor explosions. He said, “If we want to understand how the Earth was formed, then one of the things you need to know is what the planet is made out of.”[10]

He had a hypothesis that rocks pulled carbon dioxide from the oceans a long time ago. High pressures forced the CO2 to leave the rocks when they were drawn into the mantle. The freed CO2 was stripped of oxygen by iron and left the naked carbon, which turned into diamond under high heat and pressure.

Frost’s suspicions were confirmed when he turned carbon-rich peanut butter into a diamond by recreating the process with his presses. However, the diamond was destroyed by a release of hydrogen that was bound to the peanut butter’s carbon.

One press squeezes tiny crystal samples at up to 280,000 times atmospheric pressure while they are cooked by a furnace. This rearranges atoms into denser structures. The second press crushes the new minerals and slowly squeezes them with two tiny real diamonds. The results are 1.3 million times that of atmospheric pressure.

Sadly, this discovery is unlikely to make a fortune. Frost said that it would take weeks for a 2-millimeter (0.08 in) diamond to form and real diamonds have to be used in the process. He is more interested in discovering the other secrets of Earth’s history.