These could be considered as the most important fossil discoveries in paleontology because they all are theorized by scientists to represent the first appearance of that particular kind of organism on Earth. Regardless of all the theories and scientific value these great discoveries represent and the vast amount of knowledge they have ultimately led to, they are simply a truly fascinating subject to study and are sure to spark the imaginations of many. 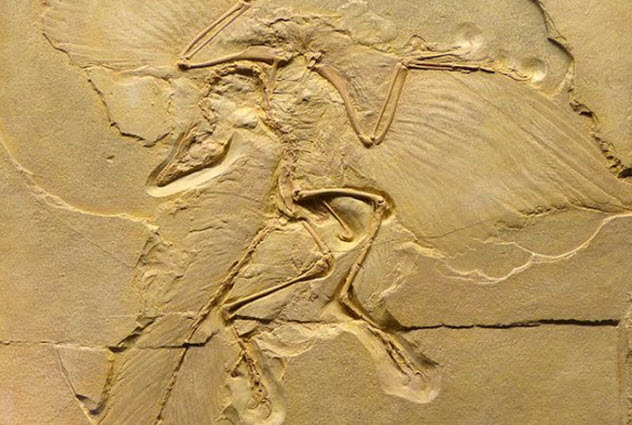 Archaeopteryx lithographica is theorized by paleontologists to be a transitional fossil, or “missing link,” between dinosaurs and modern birds, thus making it the first bird. The fossil was discovered in Germany in 1860 and with its combination of feathers and reptilian features had long been considered the first true bird. Archaeopteryx is the marriage between two words from ancient Greece translating to either “ancient wing” or “ancient feather.”

Before going extinct, Archaeopteryx lived in what is now present-day Bavaria, Germany, during the late Jurassic period about 150 million years ago. This was a time when Europe was much closer to the equator than it is now and thus was an archipelago due to the warmer climate.

Archaeopteryx weighed approximately 0.8–1.0 kilograms (1.8–2.2 lb) and was very comparable in size to a crow or raven. The animal had a tail that was unusually long for its body at 50 centimeters (20 in). Paleontologists theorize that the animal may have had some flight capabilities based on its feathers and wings. 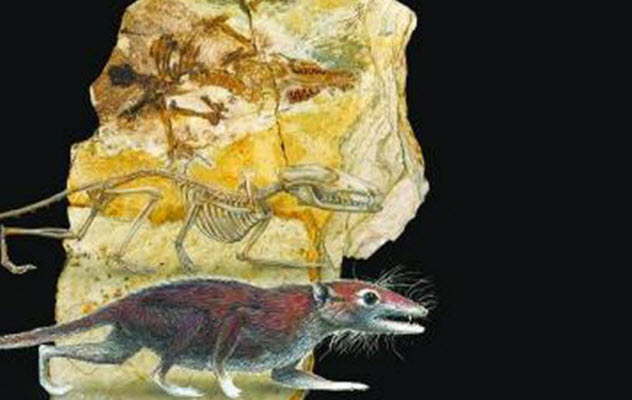 Paleontologists theorize that a fossil excavated in northeastern China has forced mammal evolution back some 35 million years. The find provides fresh evidence concerning the placental mammals, the earliest ancestors of most mammal species today. Zhe-Xi Luo, a Chinese paleontologist working with a team of scientists headed by the Carnegie Museum of Natural History, revealed in Nature magazine that a tiny, shrewlike animal, Juramaia sinensis, existed in China 160 million years ago during the Jurassic period. 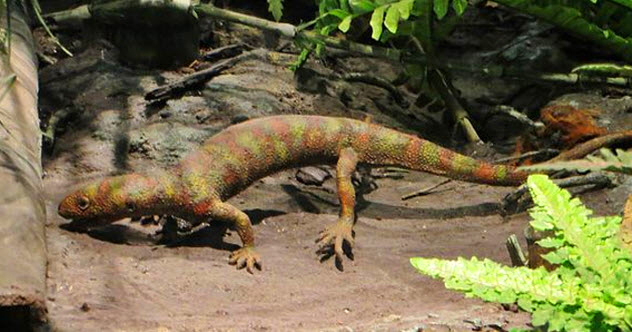 Hylonomus lyelli, which lived 315 million years ago during the late Carboniferous period, is the first known reptile to exist. In addition, it is the first creature known to have adapted to life completely on land. During this time period, also known as the Coal Age or the Pennsylvanian, Hylonomus grew to around 20 centimeters (8 in) in length including the tail. Chiefly insectivores, these reptiles were lizard-like and probably fed on small prey such as snails, millipedes, and other small insects.

It is theorized that females most likely deposited their eggs on land in humid, protected places. Found in petrified stumps on sea cliffs near Joggins, Nova Scotia, the fossilized remains of Hylonomus lyelli are mentioned in On the Origin of Species, the famous book by Charles Darwin.

William Dawson, a geologist and former principal of McGill University, discovered Hylonomus in 1852. The name Hylonomus is a marriage of two words, one from ancient Greece translating to “wood” and the Latin word for “forest mouse.”

A few fossil bones of Hylonomus were discovered inside the remains of some hollow “scale trees,” which were enormous club mosses. Scale trees had diameters of 1 meter (3 ft), grew to be almost 30 meters (100 ft) tall, and were common in swamps and along rivers in eastern North America. 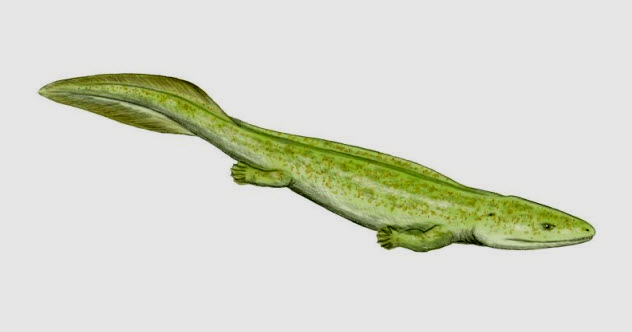 Dating to the late Devonian period of Scat Craig, Scotland, Elginerpeton pancheni was at first thought to be an unidentified sarcopterygian (fish). But in the early 1990s, the fossils were reexamined by Per Ahlberg, a Swedish paleontologist, who concluded that it was not a fish but a very early tetrapod, or four-legged animal. It is known from fossilized skeletal material that the two oldest tetrapods now known, Obruchevichthys and Elginerpeton, are closely related.

The bone fragments from Elginerpeton consist of a hip and shoulder girdle, fragments from the upper and lower jaw, a tibia, and a femur (upper and lower hind limb). There is an additional fragment that may be part of a humerus (upper forelimb). By extrapolating data from the fragments, the scientists were able to estimate a length for the animal at 1.5 meters (5 ft).

The bones share attributes in common with other tetrapods, which makes the find rather confusing for the scientists. For example, the jaw of Elginerpeton features a mixture of fish and tetrapod features while the limbs and hip share attributes with Ichthyostega, a more amphibious-looking creature. In addition, the shoulder of the animal is very similar to that of the tetrapods Tulerpeton and Hynerpeton, making the animal a literal puzzle for scientists until more fossils are discovered. 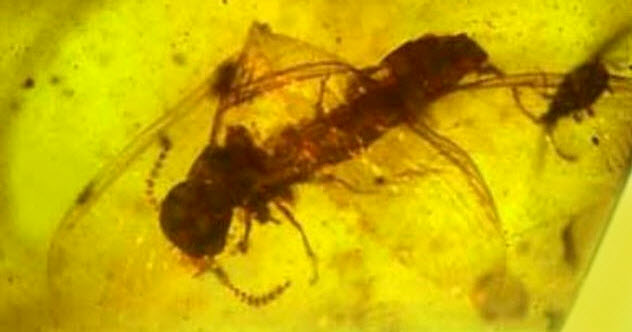 Lost in a vault under a museum, Rhyniognatha hirsti, the oldest-known fossil of an insect, was rediscovered. The find forces the origins of winged insects back about 80 million years and could shed light on the evolution of flight.

Discovered outside of Aberdeen, Scotland, Rhyniognatha is a fossilized winged bug that is 400 million years old. Robin John Tillyard, an Australian entomologist, studied the fossil in the 1920s but could not determine whether it was an insect. After that, the fossil ended up in a vault, forgotten, at the Natural History Museum in London.

While doing research for a book, US entomologists David Grimaldi of the American Museum of Natural History in New York and Michael Engel from the University of Kansas in Lawrence came across the Rhyniognatha fossil and viewed it under magnification.

In a New Scientist article dated February 11, 2004, Engel said about the find, “Today, our microscopes are vastly better than what Tillyard was using, and when we looked through the scope, we were stunned.” They also said that the animal was far from primitive and had very efficient-looking mandibles, suggesting that it was a voracious eater. 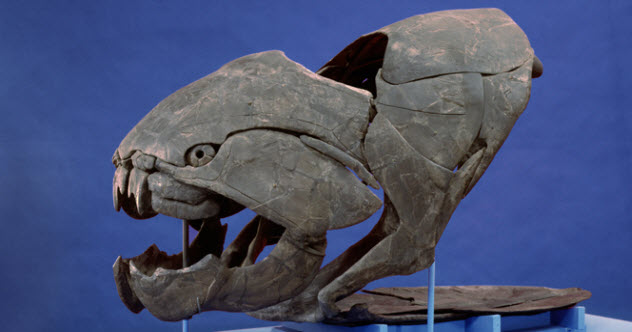 About 300 million years ago, most of northeastern Ohio was covered by a subtropical inland sea teeming with life of all kinds. The oldest, largest, and fiercest predator of the Devonian “Age of Fishes” in these waters was Dunkleosteus terrelli, a fish capable of biting huge prehistoric sharks in half.

Dunkleosteus was up to 6 meters (20 ft) long and weighed in excess of 900 kilograms (2,000 lb). It was equipped with an enormous skull consisting of huge, stout, bony plates that slid back and forth between each other like a massive pair of lethal scissors.

The jaws on this animal were so sophisticated that they would sharpen themselves just from use. The Ohio Department of Transportation began constructing Interstate 71 in 1966 and uncovered an archaeological gold mine of fossils and sedimentary material in Big Creek Valley that still produces magnificent fossil finds today. 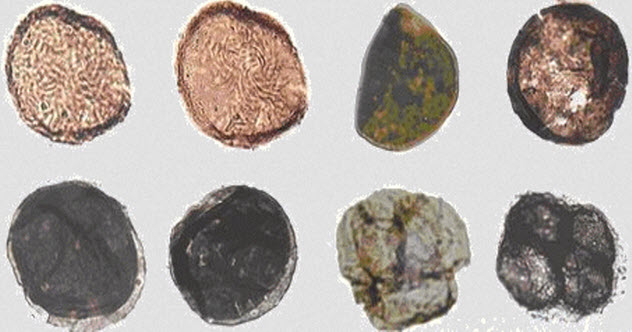 The first known land plant is now liverwort. The evolution of plants on land got forced back 10 million years to 472 million years when fossils of the earliest land plants were discovered in Argentina. According to a report in the journal New Phytologist, the freshly discovered fossilized specimens are cryptospores of liverworts—simplistic plants with no root or stem systems.

This strongly suggests that liverworts could very well be the original ancestor to all land plants. One of the most profound changes in the climate of this planet was caused solely by the appearance of land plants and the atmosphere they created, which allowed life to exist as we know it.

According to a BBC article dated October 12, 2010, scientist Claudia Rubinstein and a team from the Department of Paleontology at the Argentine Institute of Snow, Ice and Environmental Research in Mendoza, Argentina, discovered the fossilized spores in the Central Andean Basin of northwest Argentina.

The team dates the fossils at 472–499 million years old. The former age record for the earliest-known land plants was also for liverwort cryptospores that were discovered in the Czech Republic and Saudi Arabia. They were dated at a fantastic 461–463 million years old. 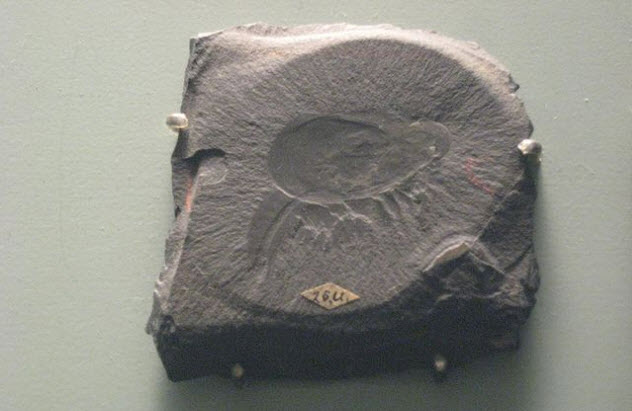 According to a book entitled The Biology of Crustacea, Canadaspis perfecta is most likely the first and oldest of the crustaceans and very proliferative, existing throughout the fossil record. Named for their discovery in Canadian fossil beds, Canadaspis had a large shell (somewhat like that of a turtle) shielding its upper body with several sharp spines that scientists think served as protection for the eyes. Looking a bit like a lobster or crayfish with no claws, the physical nature of the animal suggests that it spent most of its time on the bottom searching for the morsels of food on which it survived.

It is thought that the crustacean fed by forcing its forked appendages into the sediment while the attached spines filtered out morsels of food from the sediment as it traveled along the bottom. At first, Canadaspis was classified as a crustacean. But there are other scientists who feel that it should be classified as a euarthropod, or “true arthropod.” Ages for Canadaspis perfecta fossils range from an incredible 485–541 million years young. 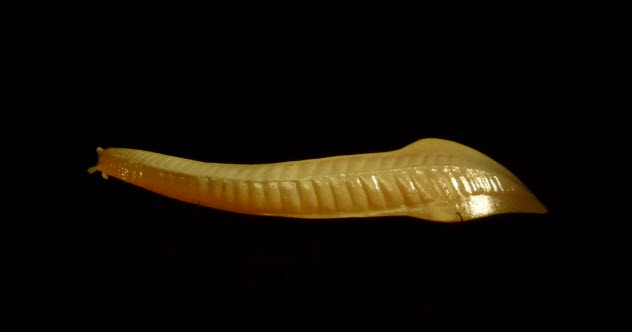 From the Cambrian period exploded Pikaia, one of the most discussed and exciting finds of the entire Cambrian age and first described by Charles Walcott in 1911. In 1979, Simon Conway Morris discovered an anatomical structure on the fossils called a proto-notochord that would develop into the first true chordates, better known as vertebrates or creatures with spines. However Morris’s suggestion that Pikaia itself was a chordate led to the widely held but incorrect belief that it is the ancestor of all vertebrates, including humans. This caused a huge controversy.

Pikaia is theorized to have had tentacles and an exoskeleton that was segmented like that of some modern insects, which are both characteristics of invertebrates, or creatures without backbones. In 1911, Pikaia was considered to be a type of polychaete, or segmented worm.

Today, scientists consider them to be more like what we know today as lancelets—a flat, fishlike cephalochordate that looks somewhat like a large leech. Not much is known about the animal or how it hunted or ate, but it was most likely a swimming animal able to undulate through the water, possibly feeding on morsels and scraps as it went. The fossils do not demonstrate anything perceived to be a head, which further mystifies scientists. 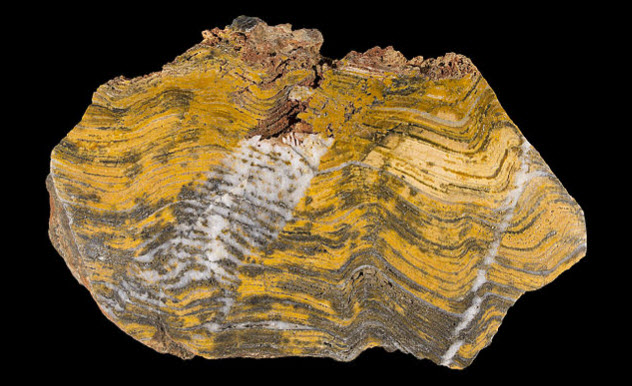 Stromatolites can be thought of as fossilized mud that is believed to be 2.3 billion years old. Specifically, they are a buildup of sedimentary materials and the bodies of cyanobacteria found in Precambrian strata. In addition to being the oldest fossils known, stromatolites are also the sole source of information about life from the earliest periods on the planet.

Being sheet-like, a single layer of stromatolites may contain biological material stretching back thousands of years. Stromatolites consist mostly of fossilized prokaryotic (single-celled) life, which has always represented the bulk of life on Earth at any time, including today. They are found in sedimentary rock in sheet form, in column-like shapes, and in layers.

Cyanobacteria still thrive today in a wide variety of environments, including rivers, lakes, and even soil. With no DNA-packaging nucleus, they are considered the simplest form of carbon-based life on the planet.

Duane lives in northwestern Pennsylvania in the United States of America and in “one of the Original 13” as he likes to say, where he grew up with a fascination for collectibles like baseball cards, coins, stamps, and old bottles, just to name a few. Always a self-starter, he has taught himself many different things and has ended up with a large variety of skills and hobbies in both old and new and has recently started putting them to use on the Internet. He has been writing in several capacities for several decades.