People have always been superstitious, blaming misfortune and ill health on gods, demons, or spirits. However, perhaps the most beloved scapegoat in history has been the witch–a mysterious woman brewing elixirs and flying to her weekly gatherings. To protect themselves from these supposedly evil and powerful women, people came up with the most curious protective methods you could imagine. 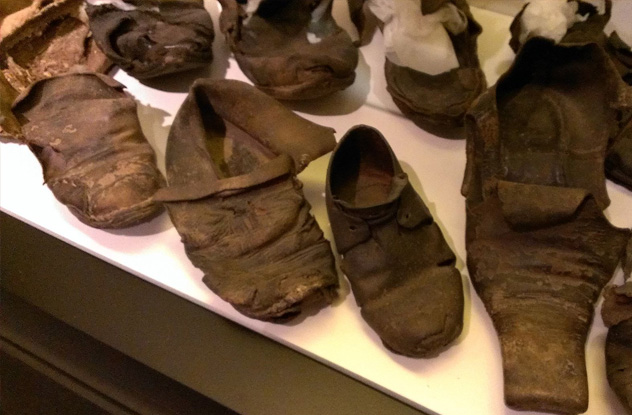 Shoes were deliberately hidden within the structure of houses, especially in so-called spiritual openings such as among roof rafters, under the floorboards, and within the walls. This concealment of shoes was said to protect the occupants from witches and other evil spirits. It is said that the belief originated in the 13th century when a Parish priest from England was said to have trapped the devil in a boot. The curious practice then continued right into the early 20th century.

Some critics claim that the shoes found in unusual crevices were simply lost or disposed of as rubbish rather than concealed for magical purposes. However, these shoes have been left in places that are normally only accessible during times of construction and alteration or by taking considerable trouble, such as raising a floorboard. The number of cases and the obvious patterning, as well as the fact that some of the concealed footwear has been found alongside other strange objects such as >dried cats or horse skulls, also suggests that the shoes were indeed hidden deliberately. 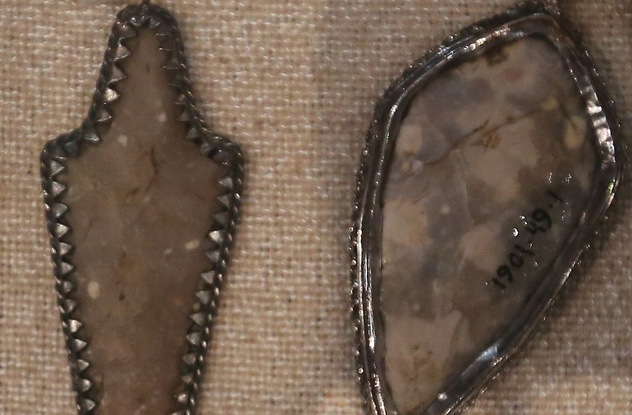 In the past, the Scottish peasantry believed that elf arrows or elf shots (arrowheads of flint) fell from clouds and were used as weapons by fairies, elves, and witches to destroy cattle and humans. However, once these arrows were in possession of humans, they could be used as talismans against witchcraft and evil eyes, as well as a cure for cattle that have been afflicted.

Elf arrows were never found when looked for but turned up in the most unexpected places and circumstances. The Scottish geographer Robert Gordon of Straloch described a man who found an elf arrow in his boot while riding and a woman who found one in the breast of her dress. It was necessary to ensure that elf arrows were not exposed to sunlight, for if they were, they could easily be recovered by witches and used as instruments of evil once more. 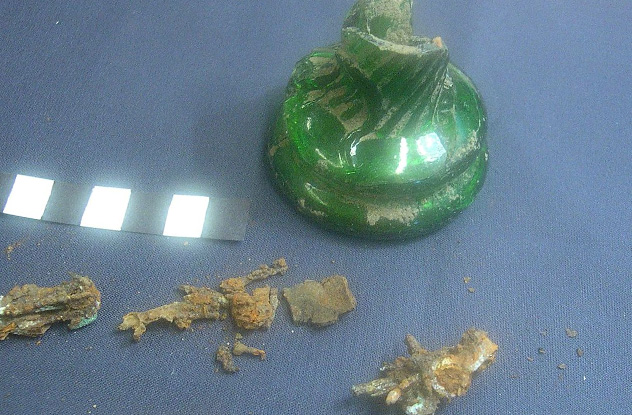 Witches’ bottles or spell bottles were ceramic (and sometimes glass) bottles filled with hair, nails, bent pins, urine, and other curious objects. They were most popular during the late 16th and 17th centuries in England and America and were used for destroying the evil spell that a witch supposedly cast onto the bottle’s creator. The urine and the bulb of the bottle represented the witch’s bladder, and the widespread belief was that the nails and the bent pins would aggravate the witch so badly that she would instantly lift the spell back off you.

Witches’ bottles were usually either buried or placed in the windows of the creator’s home. 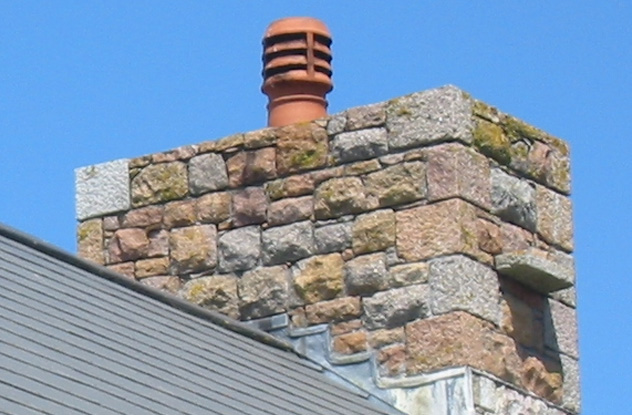 Many old Guernsey cottages and houses have stone blocks sticking out of their chimneys. These stone blocks were originally used for preventing rainwater from seeping through the joint between the thatched roof and the chimney. Over time, however, they came to be associated with nocturnal fliers.

It was said that on Friday nights, when witches were flying back from their weekly congregations, they sometimes grew tired and rested on these chimney ledges. If a witches’ seat did not exist, the witch could grow angry, slip down the chimney, and cause havoc—or, worse, take up permanent residence in the house. 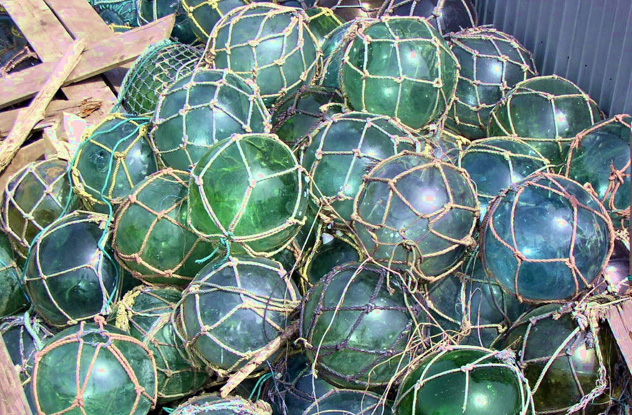 A witch ball is a brightly colored glass sphere used for protection against witches, spells, and ill fortune. During the Middle Ages, witch balls were molded into sloppy spherical shapes. During Victorian times they took on a more refined shape and were made from higher-quality glass. 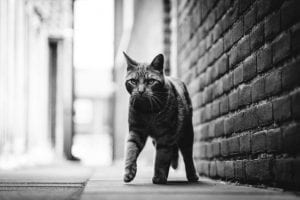 A cat bricked up in a wall. Not something you would want to find while renovating. However, these were common in the past to help protect people’s homes from supernatural beings, including witches. Arranged in hunting poses and bricked up in walls, these unfortunate felines may well have been employed for the same job pet cats are tasked with today: catching vermin. But, rather than (or as well as) deterring mice, they scared away pests of the supernatural variety: the witch’s familiar, for example, which was often believed to take on animal form.

The cats weren’t the only thing used for this type of protection. Other items consisted of a figurine hidden in the rafters or a lock of human hair hanging in the attic. 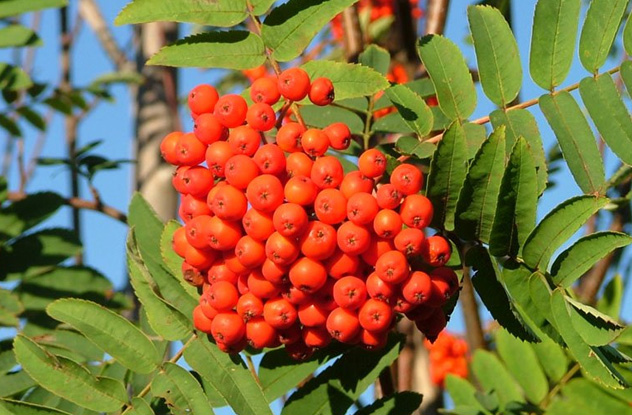 In the British Isles, it was believed that the rowan protected against witchcraft and enchantment. The tree’s reputation may have stemmed from its physical appearance—a small five-pointed star or pentagram can be found on each berry opposite its stalk, and the color red was thought to be the best protection against enchantment.

The rowan tree could be used for protection in numerous ways. The tree itself protected the dwelling by which it grew, while people often took pieces of the tree for personal protection and the protection of cows and their produce. For example, on the Isle of Man, crosses were made from rowan twigs, which were then worn by people, fastened on cattle, or hung inside over the lintel on May Eve every year. In Cornwall and Scotland, similar crosses made from rowan twigs were bound with red thread and carried in pockets or else sewn into the lining of coats. 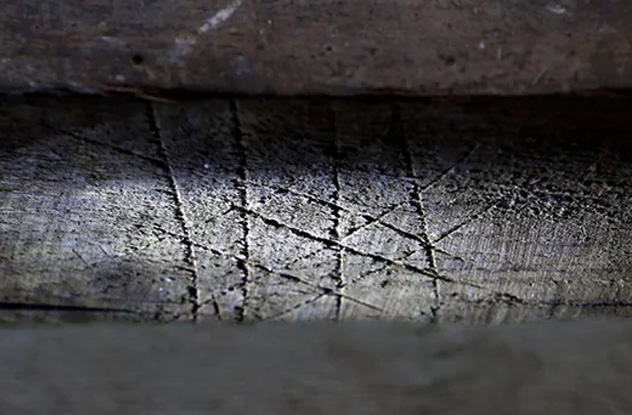 Witch marks were ritual protection marks made by individuals asking for protection from the witches and other evil spirits. The marks included various protective symbols such as a compass and a pentacle.

Witch marks were most popular in medieval churches and houses. For example, witch marks were recently discovered under 17th-century floorboards at Knole house in the civil parish of Sevenoaks in west Kent. The marks were carved anticipating a visit from King James I, a man obsessed with witchcraft. The marks included scorches made with a candle flame, carved tangles of Vs and Ws (asking for the Virgin Mary’s protection), and mazes known as demon traps (the rationale behind these being that the evil spirits would follow the lines and would be unable to find their way back). 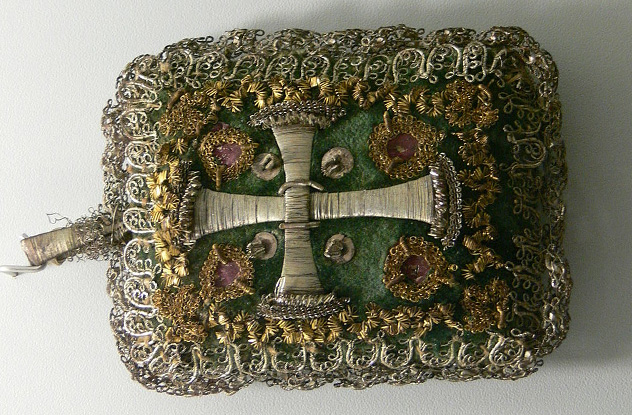 Charms repel or break the spells of witches. Some were verbal and included phrases, formulas, and prayers. In the 17th century, for example, a Nottingham sorcerer prescribed herbs and the recitation of five Our Fathers, five Aves, and one Creed to break witch’s spells. Other charms were written and included inscriptions on paper, parchment, wood, or other materials.

In Pennsylvania, Germans carried written amulets and charms on their person. These amulets included a written version of a protective charm and sometimes verses from the Bible. The paper was often folded into triangles. Sometimes, instead of being carried personally, the amulets were hung in a barn or a house. 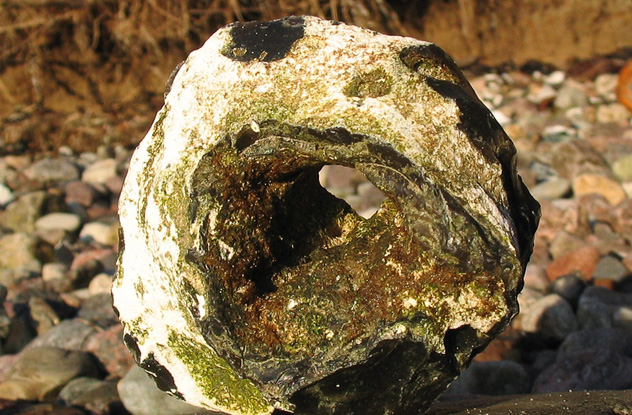 Hag stones, also known as holey stones or Odin stones, have natural holes. For centuries, hag stones have been used in southwest England, particularly in Dorset, to protect people from witchcraft. They were often hung above the doors of people’s houses and on key chains or beds to protect them from witches and demons who would steal their strength while they were sleeping.

In farms, hag stones were hung above the stable door and were also often tied around the neck of a horse to protect them from witchcraft, since witches were prone to stealing horses and using them to get to their sabbats. 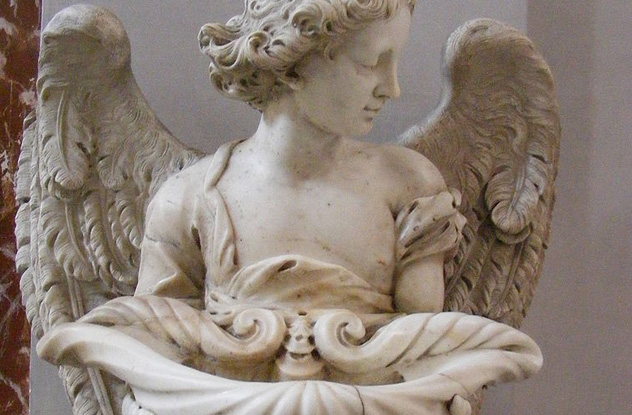 In medieval times, holy water was the most popular weapon against the devil and his subjects, who were supposedly allergic to it. It was sprinkled around the house, on crops, and farm animals to drive away evil spirits. Sick animals diagnosed as suffering from a witch’s curse had holy water poured down their throats.

The holy water carrier visited the villagers often to make sure that everyone was protected sufficiently. When storms hit, villagers were sure it was the act of witches and would race down to the local church to acquire extra drops to protect their homes from lightning and to drive the witches away.