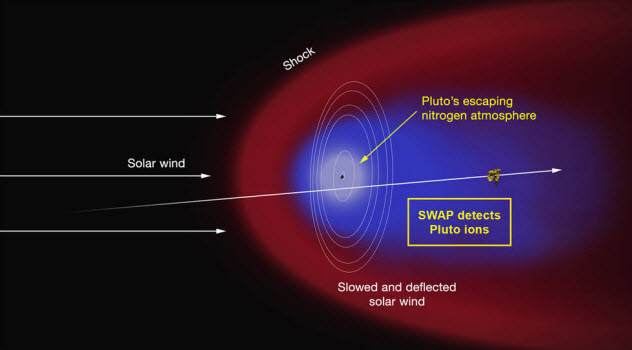 The SWAP (Solar Wind Around Pluto) instrument found that, like everything else about Pluto, its solar influence is unique in the solar system. Smaller comet-like bodies gently perturb the wind while larger planets slam into it like a wrecking ball. Pluto does both, acting like some wacky hybrid between planet and comet. Pluto creates a neat little bow shock but also an abrupt displacement of solar wind, the Plutopause.

SWAP also revealed that the dwarf planet sports an ionic tail that begins between 77,000–110,000 kilometers (48,000–68,000 mi) behind Pluto. This thick region of cold gas is Pluto’s methane- and nitrogen-rich atmosphere fleeing its host’s weak gravity for a cosmic road trip. The escaping particles get all kinds of ionized upon contacting ultraviolet radiation from the Sun and are carried “downstream” by the solar wind. 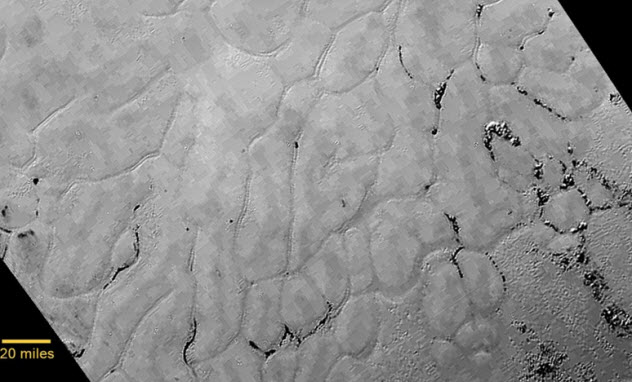 As New Horizons zoomed past Pluto, the images sent back displayed expected damage, including craters from past impacts. But the probe also sent back a surprise—smoothness.

Hanging out 6 billion kilometers (4 billion mi) from the Sun, Pluto should look dead, like Mercury or the Moon. Its entire surface should be marked with craters. Instead, its frosty heart, Sputnik Planum, appears polished and astronomers believe it’s under constant remodeling, with a replenishing surface that smooths over imperfections.

It’s unclear where Pluto’s energy is coming from. But it may be that the ancient collision that led to its birth occurred more recently than believed and chemical-laden ices are melted by residual inner heat. Or maybe Pluto’s small radioactive stockpile supplies the energy as it decays. 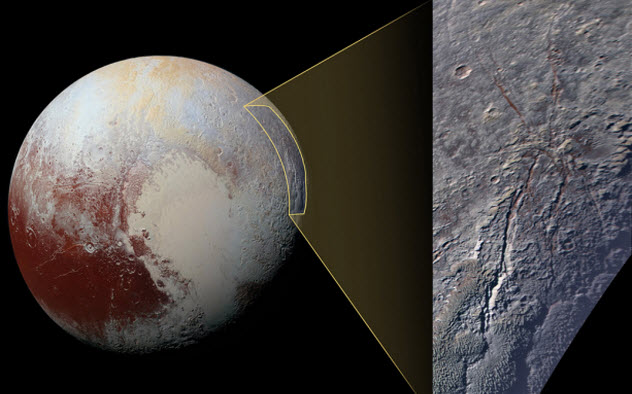 Part of the dwarf planet is covered by what looks like a spider, extending six giant legs across the surface in a network of cracks unlike anything in the outer solar system.

The smaller cracks are an impressive 100 kilometers (60 mi) long, but the largest, Sleipnir Fossa (named after the eight-legged horse of Norse lore), goes on for over 580 kilometers (360 mi).

They’re unlike other cracks on Pluto, which run in parallel lines and are probably outlines of Pluto’s creaking crust. But the spider is different. Its cracks intersect at a central point, suggesting that a localized subterranean stress is cracking Pluto like a walnut. Odder yet, the cracks reveal a reddish subsurface.

Astronomers see similarly chapped terrains on Mercury and Venus and believe those cracks result from subsurface materials wriggling to the surface.

7 Some Of Pluto’s Atmosphere Is Migrating To Charon 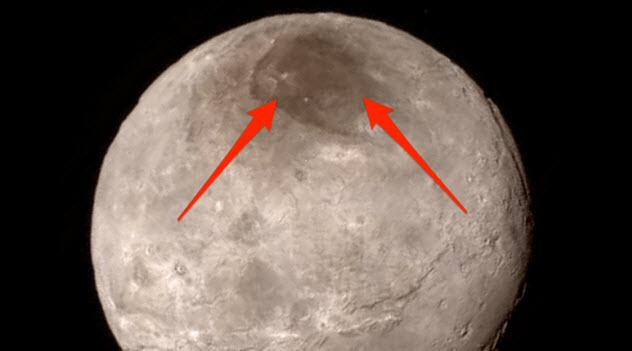 That’s close enough to share an atmosphere like an interplanetary Snuggie. Researchers predicted this in the 1980s because binary pairs and planets circling super close to their stars also share atmospheres.

Nearly 40 years later, astronomers have proof that some of Pluto’s nitrogen is trapped by Charon. Most gases funneled toward the gravitationally impotent moon escape into space but not all. Polar temperatures range from 60 Kelvin (-351 °F) to 15 Kelvin (-433 °F), and at these near-absolute-zero temperatures, the gases stick.

The Sun’s ultraviolet barrage irradiates them into tholins. With higher sublimation points, tholins remain frozen even during Charon’s summer, forming a reddish blotch at the north pole. 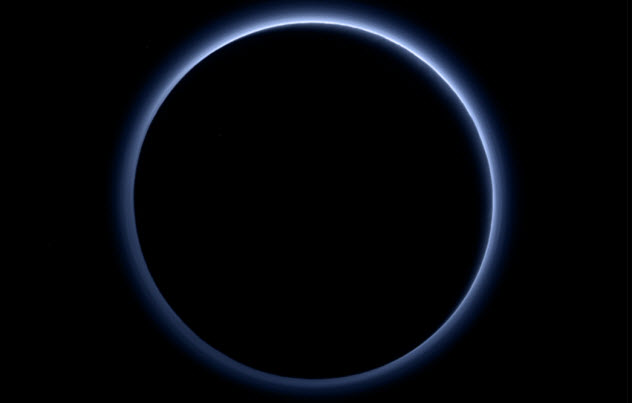 In Pluto’s hot pot atmosphere, the Sun bakes methane and nitrogen into more complex hydrocarbons, which clump in submicrometer aggregations. Together, they scatter sunlight to give Pluto its blue haze.

But the dwarf is too puny to hold its atmosphere, which is leaking into space at the alarming rate of hundreds of tons per hour. It’s unclear why Pluto hasn’t run out, but maybe the process was slower in the past and recently accelerated for some reason only Pluto knows.

More likely, Pluto holds a nitrogen supply inside its frozen bowels. Nitrogen probably wells up from within to resupply what’s lost to space and seasonal changes.

Comets may have delivered loads of nitrogen in the past and excavated more by punching through Pluto’s surface but probably not enough. Instead, Pluto is probably brewing up its own supply and releasing it in potentially radical ways, like geysers and volcanoes. 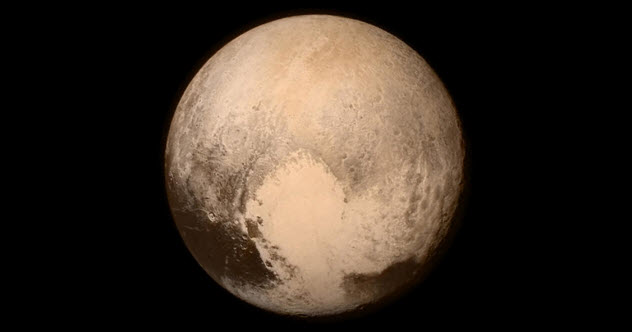 Photo credit: NASA via The Independent

As New Horizons approached Pluto, the dwarf rotated into view and welcomed us with a heart, informally dubbed “Tombaugh Regio” after Pluto-finder Clyde Tombaugh.

Sputnik Planum’s frozen plains are a grab bag of planetary oddities. Some areas look like cracked mudflats on Earth. Others are uncharacteristically hilly. Troughs line the region, with some dark substance oozing from below to fill the seams. Darker streaks are present across the plains, hinting at Pluto’s winds.

But why is Pluto such a pupu platter of terrains? Possibly convection, otherwise known as the lava lamp effect. Like rising wax globules, Pluto’s frozen carbon monoxide, nitrogen, and methane guts may be driven surface-ward by inner warmth.

Or this may all be the doing of a contracting crust. Like cracking paint, the surface of Pluto chips and fractures under the pressures of shifting materials. 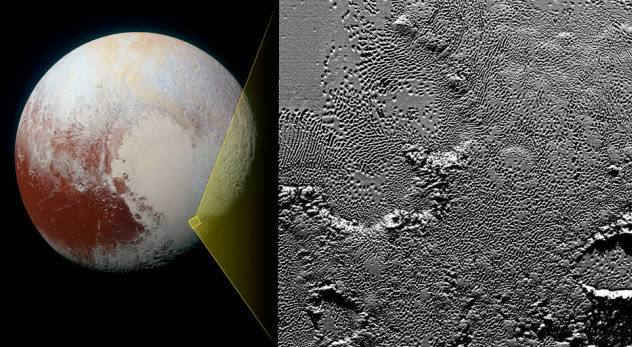 Pluto is so cold that it flirts with absolute zero, and at these temperatures, frozen substances seem to skip a stage of matter. Instead of melting, methane-laced ices sublimate, transitioning directly from solid to gas when warmed by the distant Sun.

Sublimation can take entire bites out of the dwarf planet. Likened to tooth marks, the western hemisphere’s Piri Rupes escarpment is a desolate, craggy wasteland. The plateau is edged with jagged cliffs and overlooks a lower, flatter area called Piri Planitia.

The highlands are rich in methane ices while the lowlands are stupid with water ice, which probably serves as the bedrock. The chemical discrepancy suggests that the plains are surfaces revealed as methane-ice cliffs sublimated away.

Tombaugh Regio has its own pits, which are relatively free of craters and the result of recent activity, possibly a combination of ice fracturing and evaporation. They look small, but that’s an illusion of distance. 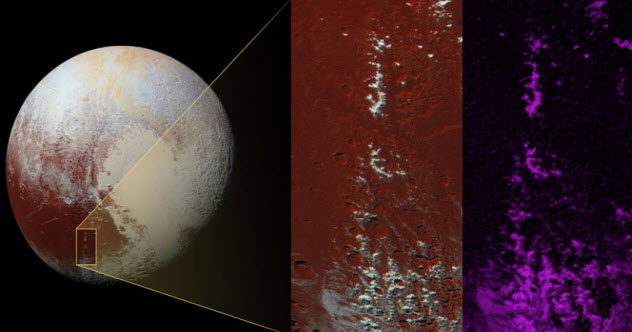 Seen from above, Cthulhu Regio is a collection of pits, craters, ravines, and dark red expanses. It seemed dead until New Horizons delighted us with images of snowcapped peaks made of methane.

The shining methane snow is striking against the much darker lowlands in the image above, which was taken from only 34,000 kilometers (21,000 mi) away. Astronomers think that the snow forms through a bizarre version of the process seen on Earth. 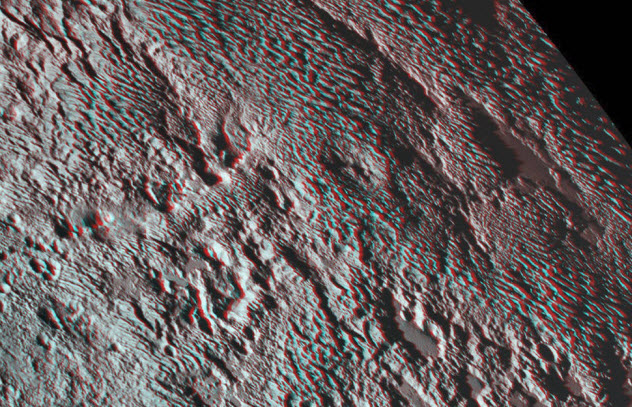 In the eastern portion of Tombaugh Regio, Tartarus Dorsa is notable for its snakeskin-like terrain. Its “scales” are several miles apart and hundreds of feet high but otherwise remain a mystery. They may be deposits of methane ice or scars etched into the crust by evaporating substances.

They appear sturdy and are probably buttressed by methane clathrates, which form at ultralow temperatures. Clathrates are microscopic scaffolds, or cages, made of water in this case. On Pluto, they form a rigid shell around methane.

On Earth, clathrates formed deep in the ocean are weak and break easily. On an icy surface like Pluto’s, the cages may be strong enough to support the overlying snakeskin.

Tantalizingly, clathrates have been spotted in the Kuiper Belt and may predate the birth of the solar system, like time capsules from the protosolar nebula that birthed our Sun and planets. 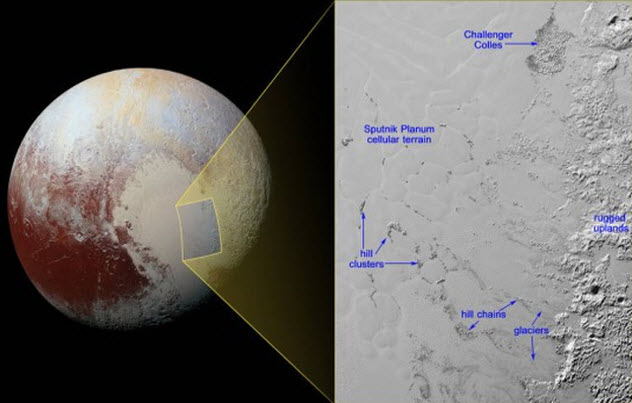 Pluto’s hills are fascinating. Unlike static landforms, they constantly migrate across Sputnik Planum. The hills are probably fractured cliffs from the surrounding highlands and fortified with steel-hard water ice. Like icebergs, they drift across Pluto’s frozen, nitrogenous glaciers.

Since nitrogen ices are less dense than water, they provide a perfect surface for the hills to skate on. Powered by convective forces from within Pluto, they’re deposited at the edges of “convective cells,” where they create landforms as large as 20 kilometers (12 mi) across. The largest of these is named Challenger Colles in honor of the Challenger crew.

But the hills are just baby versions of Pluto’s monster water-ice mountains. Frosted with frozen nitrogen, methane, and carbon dioxide, they tower 3,500 meters (11,500 ft) into the wispy atmosphere. At less than one hundred million years old, they’re among the youngest things in the entire solar system and possibly growing!