Medieval bestiaries were hugely popular works that told the stories of not only animals, but also plants, rocks, and fantastic creatures that people living in Europe could only dream of. Most came out of the 12th and 13th centuries but took their inspiration from writers as far back as Isidore of Seville and Pliny. The bestiaries were often illustrated, and the resulting manuscripts are some of the most brilliantly illuminated books of the time. The creatures within were often linked with some sort of moral tale, and while many of the animals depicted were real, a handful came straight out of a medieval fantasy world. 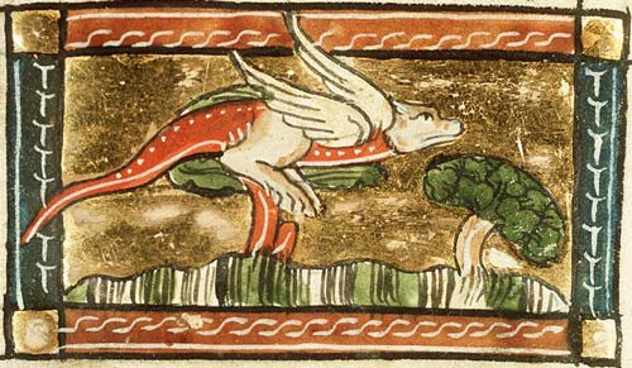 In the seventh century, Isidore of Seville embarked on an ambitious project. He wanted to record everything that mankind knew, and his resulting volumes were known as the Etymologies. In them, he also wrote extensively on animals known and rumored to exist and referred to the Roman poet Lucan when he wrote about an African flying snake called the iaculus (also spelled jaculus).

Lucan wrote that when the iaculus was on the hunt, it would wait for prey in a tree. Once a suitable meal came into view, the iaculus would hurl itself at the chosen prey. The snake’s name, derived from the word for “javelin,” comes from this method.

The Aberdeen Bestiary also talked about the iaculus. The cemetery-dwelling serpents gathered the wisdom of the dead and whispered it to the living, but they needed to be fed a single bowl of warm beer every day to keep them from killing those who sought their counsel. 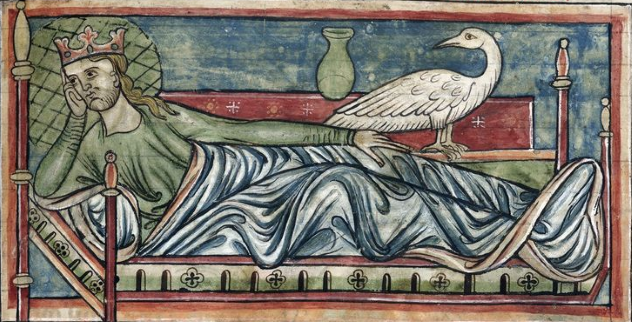 Photo via The British Library

The story of a completely white bird called the caladrius shows up many bestiaries. The caladrius was described as tan or yellow in some, particularly in the stories of Alexander the Great’s rumored encounters with the mystic bird.

The caladrius had incredible healing powers. The bird’s dung was said to be able to cure blindness when applied directly to a person’s eyes. Pliny the Elder claimed that the bird (which he called icterus) was particularly good at curing those suffering from jaundice. 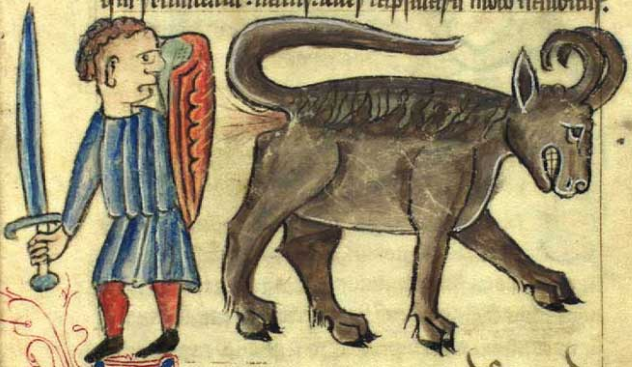 The bonnacon has been described as far back as Pliny and was a staple of medieval bestiaries. Depicted as having the head of a bull on the body of a horse, the bonnacon also sported horns that were curled backward, said to be all but useless.

Fortunately, the creature had another defense mechanism. When the bonnacon was threatened, its bowels would let go and cover everything in the area with dung that both smelled terrible and burned everything it touched.

Most illustrations of the bonnacon show it giving potential pursuers an explosive poop-shower because even medieval scribes needed a laugh. Today, it has been suggested that the bonnacon was based on large, hoofed animals like bison and that it’s entirely possible that the whole story grew from a single sighting of a terrified animal losing control of its bowels while being pursued.

Lucan said that the dipsa was one of 17 different types of snakes that were created when Perseus cut off Medusa’s head. Blood dripping from the severed head leaded in different places as the hero traveled, spreading snakes across the world. The dipsa was created in the deserts of Libya.

Dipsas had incredibly potent venom, and victims were driven mad as their flesh burned to a crisp. The snakes were also cursed to be relentlessly thirsty.

Lucan claimed that a friend had been traveling though Libya when he came across a tomb with the image of a dipsa. Its fangs had been sunk into a man’s foot, and a group of women were pouring water over him in an attempt to stop the agony. An inscription on the tomb claimed that he had been bitten while stealing the snake’s eggs, which could be eaten. 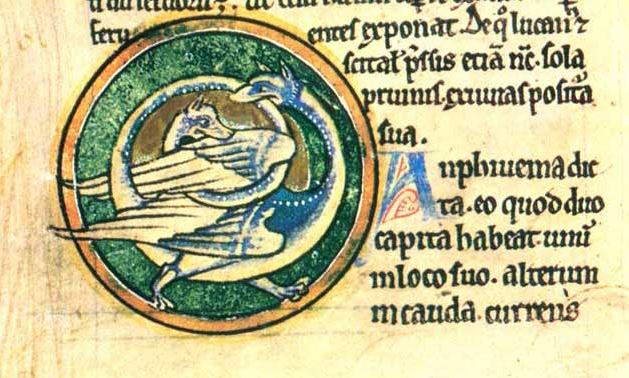 The amphisbaena is a venomous snake with a head at each end, allowing it to move easily in any direction. Later depictions added wings, feet, and horns.

The skin was rumored to be a potent cure for a variety of illnesses, but Greek folklore claimed that if a pregnant woman stepped over a live amphisbaena, she would likely suffer a miscarriage. To protect herself, the woman should carry a dead one in a jar.

Roman lore claimed that if the amphisbaena was captured and wrapped around a walking stick, it would protect anyone who carried it from any creatures that killed prey by striking it. Isidore of Seville gave the snake glowing eyes that illuminated the darkness like lanterns and wrote that it was the only snake that could hunt in the cold. 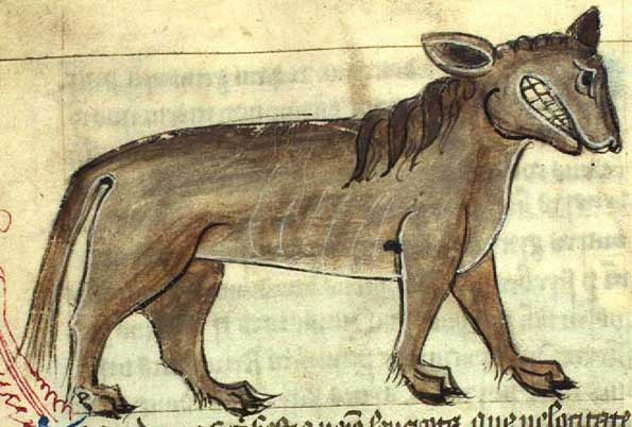 Also called the leucrocotta or leukrokottas, this horse-like creature from India (and sometimes Ethiopia) is pure nightmare fuel. Half-stag and half-lion, it had the head of a horse with one terrifying difference: The mouth ran from ear to ear. The leocrota’s jaw was filled with not teeth but a single, bony ridge that would never get dull. The leocrota was said to be able to mimic human speech and would call out in the night to lure unsuspecting victims into reach.

Pliny claimed that the leocrota was the offspring of an Ethiopian lioness and a hyena. It was born with the strength of a lion and craftiness of the hyena, an animal thought to mimic the sound of vomiting men in order to attract their prey. Similarly, the leocrota hunted in wooded areas around villages and relied on man’s curiosity to be his downfall. 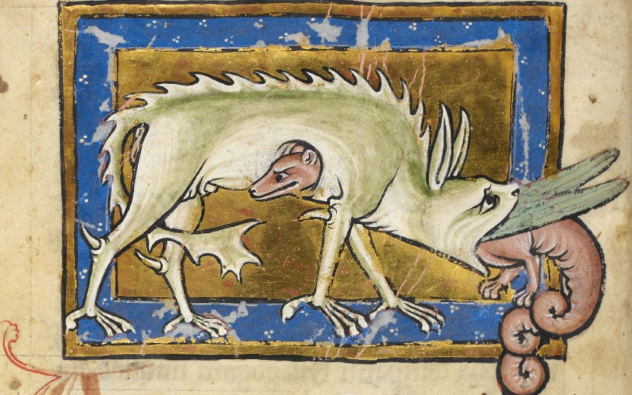 The hydrus (also called the enhydros) was said to live along the Nile River, where it prowled through the waters in search of crocodiles. When it found a sleeping crocodile, the hydrus would cover itself in mud and hurl itself into the sleeping crocodile’s mouth. When the mouth closed, the hydrus would burrow through the beast and eat through its internal organs, tearing its way out of the crocodile’s belly, killing it.

Isidore wrote about the hydrus in the seventh century, but it wasn’t until the 12th century that St. Antony of Padua likened the creature’s habits to Christ and the apostles, who bathed in mud and challenged evil only to come out alive on the other side. Depictions of the hydrus vary; some bestiaries describe it as a bird, while others show it as a snake. 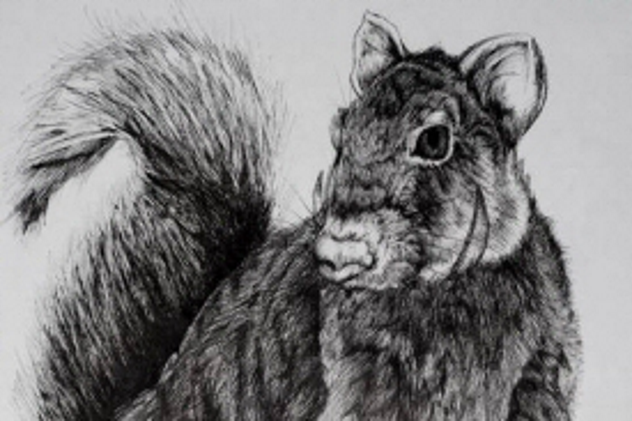 The muscaliet shows up in a bestiary written by an enigmatic figure referred to as Pierre de Beauvais, so named simply for the earliest dialect that he wrote in. He claimed to have been writing as a translator, but no one has been able to determine what earlier works he was translating.

Among the creatures in his Bestiaire is the muscaliet, a strange, tree-dwelling creature. He described it as having the body of a small hare, the nose of a mole, the ears of a weasel, and the tail and legs of a squirrel. The muscaliet is covered with the tough, coarse hair of a pig and has the teeth of a boar.

Capable of jumping from tree to tree, the muscaliet radiates so much heat that it kills leaves on contact. The little creature burrows beneath trees to make its nest and will ultimately kill whatever it sleeps under. 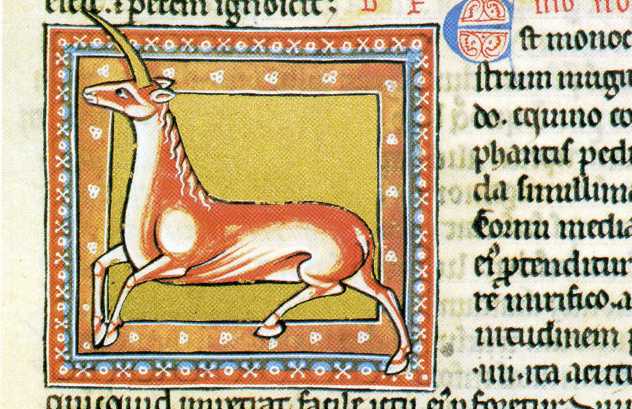 The monoceros (also known as the karkadann or the carcazonon) is a bizarre sort of unicorn that featured in bestiaries from ancient to medieval times. It had the body of a horse and the familiar long horn of the standard unicorn, but it also had an elephant’s feet and a deer’s tail. Pliny gave the creature a boar’s tail and a deer’s head.

The monoceros’s horn was said to have had all the highly sought-after properties that were found in other unicorn horns. The monoceros was far from the docile creature that a unicorn was said to be, though. It would kill any man that it came across. Bestiaries claimed that this was why there were no records of one ever being captured or killed and said that the monoceros’s presence was heralded by by a deafening, bone-chilling, horrible braying. 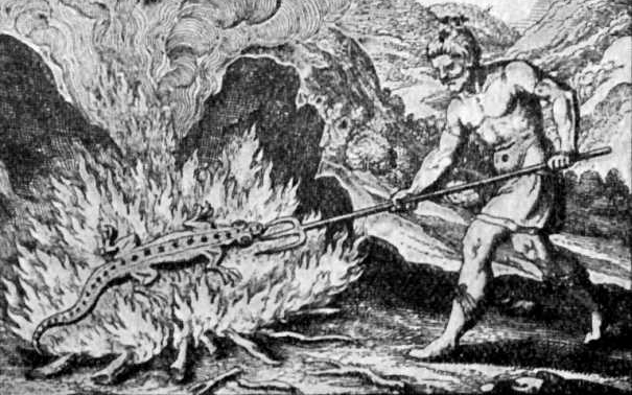 Salamanders are very real, but the salamanders of medieval bestiaries were creatures who could not only live in fire and survive exposure to the hottest of flames, but could put them out. St. Augustine first wrote of the salamander as the embodiment of the soul’s resistance to the fires of Hell, claiming that the salamander’s power over fire was proof that it was possible for something worldly to face the fires of Hell and not be destroyed.

While early salamanders from ancient Persia were symbols of divinity, the medieval world’s salamanders weren’t just fireproof; they were poisonous. A salamander that fell into a well could poison and kill an entire village, and one that decided to make its home in a tree could not only kill the tree, but anyone and anything that ate the tree’s fruit. Pliny was the first to claim that salamanders could extinguish nearby flames, inspiring centuries of myths and mythology.