From the depths of the oceans, discoveries throughout time have been kept preserved for us to find today. Because of the unique conditions of the sea, things are preserved which may otherwise have deteriorated if they were on land. Here are just a few examples of incredible discoveries from underwater. 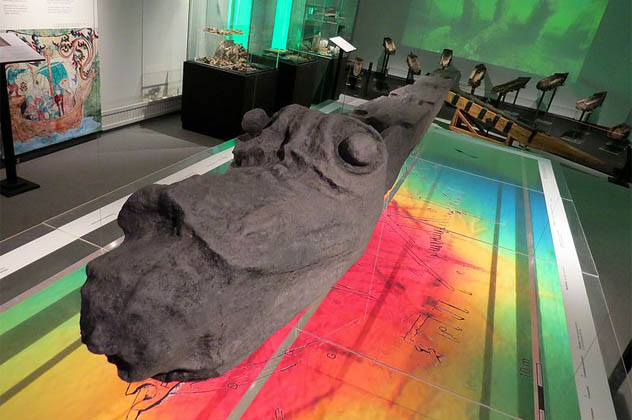 In 2015, the terrifying figurehead of the 15th-century Danish warship Gribshunden was brought back up to the surface. The Gribshunden, or “Grip Dog,” had been at the bottom of the Baltic Sea since 1495, and the figurehead adorning it displayed an image that no doubt struck fear in the hearts of other sailors. It appears to be a sea monster bearing a dragon face and lion ears with a person being eaten in its crocodile-like mouth.

It’s unclear what “Grip Dog” means, but “Gribshunden” was both the Danish word for a dog or hound and the mythical Greek griffon. The Gribshunden served as the flagship of King Hans of Denmark’s royal fleet until it caught fire off the coast of Sweden while King Hans was trying to negotiate a political union between other Scandinavian countries. Since then, the wreckage has remained under the ocean, but its figurehead was brought back after divers managed to heave the massive artifact up from the depths. 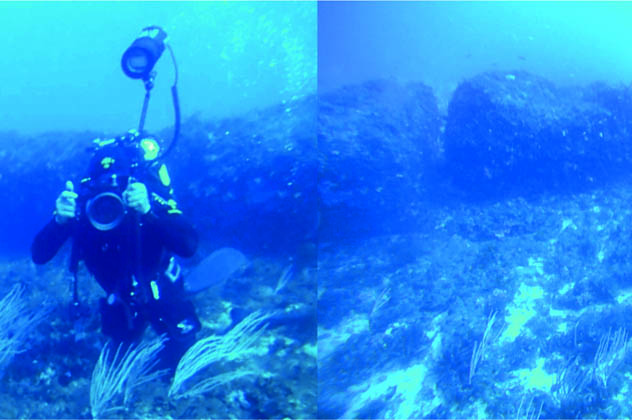 While mapping the sea floor near Sicily, researchers discovered an enormous monolith that was nearly 12 meters (39 ft) in length. According to archaeologists, the qualities of the monolith suggest that it was a man-made structure rather than naturally produced and that it was most likely constructed around 10,000 years ago. Discovered in the Pantelleria Vecchio Bank, the monolith serves as evidence that there was an archipelago in the area that no longer exists.

As to the purpose of the strange object, it is believed that it served as a lighthouse because a hole had been carved into it which may have held a light. Before the Last Glacial Maximum, which began around 19,000 years ago, Europe was about 40 percent bigger, so the monolith was on land at one time before it sank into the sea. 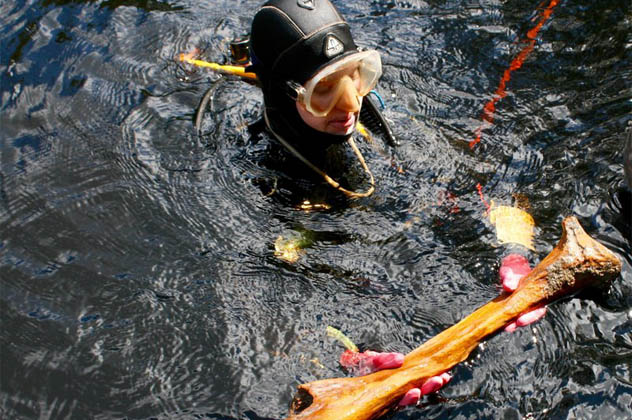 When a sinkhole located near Florida’s Aucilla River was examined in the past few years, the divers made extraordinary discoveries: evidence of human occupation well over 1,000 years earlier than previously thought. The same sinkhole had been examined on a few other occasions from 1983 to 1997, but the findings—mainly, a mastodon tusk that had possible human-related cut marks—were too ambiguous to provide any real conclusions.

However, from 2012 to 2014, remarkable artifacts were found that were undeniably human: stone tools, bone, and a biface, which is a sort of primitive human knife. It seems that the ancient people may have tried to scavenge a mastodon at the site, which was just a small pond at the time. All of these findings date back around 14,550 years, a good 1,000 years older than the Clovis people, the earliest provable inhabitants of North America. 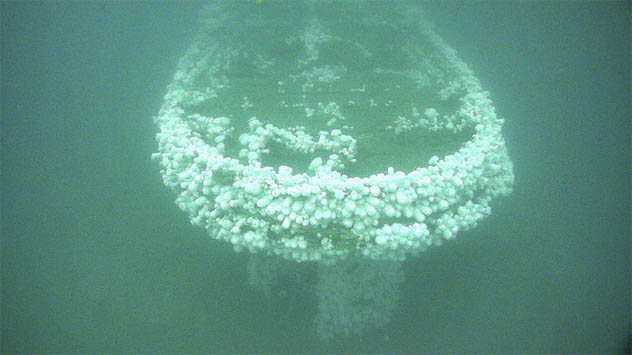 In 1921, a navy tugboat, the USS Conestoga, disappeared without a trace after setting sail from San Francisco. After an extensive search for the boat using air and sea resources, all that could be found was an overturned lifeboat marked “C” that had drifted hundreds of miles off course. In 2016, the 95-year-old mystery was finally solved.

In 2009, the N.O.A.A. Office of Coastal Survey discovered an unidentified shipwreck in the sharp rocks of the Farallon Islands, but it wasn’t until 2015 that underwater remotely operated cameras managed to get a good view of the wreckage. The distinctive propeller and deck-mounted gun matched only one other vessel: the USS Conestoga. It seems that the tugboat encountered rough waters and sank while the crew was trying to steer it to a cove in the Farallons. 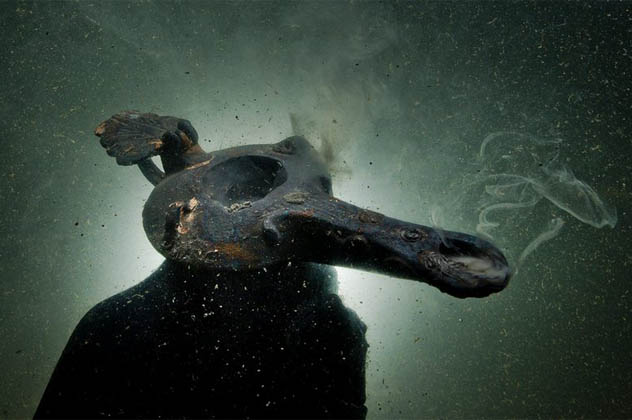 In the eighth century AD, the cities of Thonis-Heracleion and Canopus were submerged underwater after a series of natural disasters like flooding and earthquakes. Since then, they gained near-legendary status and were considered lost until 2000, when they were rediscovered in Aboukir Bay near Alexandria. The site has since yielded almost perfectly preserved colossal structures, coins, and jewelry. The site still produces remarkable artifacts, and it seems that there could be even more to come, including a possible third city.

According to Franck Goddio, the French mariner who discovered the cities: “We’ve probably excavated only 1 percent or 2 percent of the site—possibly less.” Historically, Thonis-Heracleion was important enough to warrant a mention from the historian Herodotus in the fifth century, who described the city’s magnificent temple and said that Helen visited the city before the Trojan War to visit her lover Paris.

5The Ships Of The Fourni Archipelago 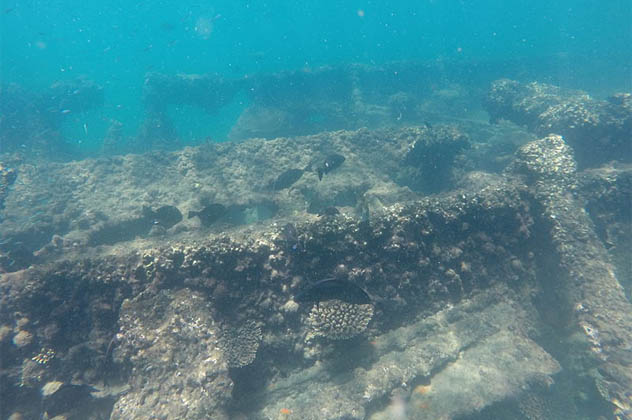 The Fourni archipelago is a small and relatively insignificant collection of Greek islands today, but in ancient times, it served as one of the most important places for maritime trade. There are so many historic shipwrecks in the Fourni archipelago that it has been referred to as the “ancient shipwreck capital of the world.”

Since 2015, 22 shipwrecks from Greek antiquity have been discovered in the Fourni archipelago. The wrecks range from as early as 480–700 BC to as late as the 16th century. These wrecks have yielded many artifacts and shed light on the life of a sailor hundreds of years ago. Going back in time, however, no important settlements existed in the area which means that the archipelago most likely served as a sort of shipping hub between Greece and other countries. Since so many ships went through the area, many shipwrecks must have occurred, but it is estimated that only one shipwreck occurred every 100 years. 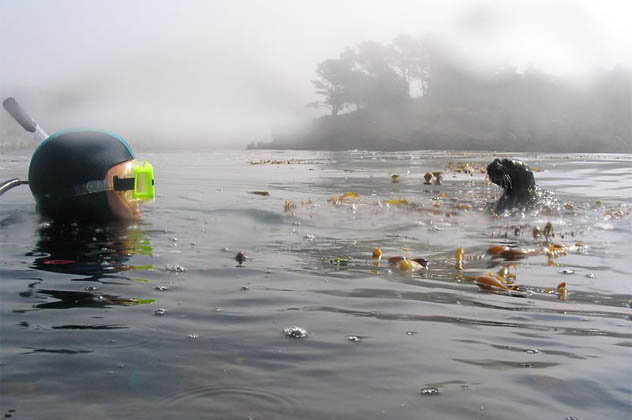 After Hurricane Katrina devastated the Gulf region of North America, a surprising find was made at the bottom of the ocean. Uncovered by the hurricane was a 50,000-year-old perfectly preserved forest known as the Bald Cypress Forest. It had been covered by ocean sediments in an oxygen-free environment, allowing the forest to remain intact.

The primeval trees were so well preserved that when they were cut, they still smelled of fresh cypress. The forest, located off the coast of Alabama, was originally discovered by a diver soon after the hurricane, but the location wasn’t disclosed by the finder until 2012. By then, the forest was still pristine but had become a flourishing artificial reef for various aquatic species. The forest was last above water during the Wisconsin Glacial period, when sea levels were much lower than they are now. 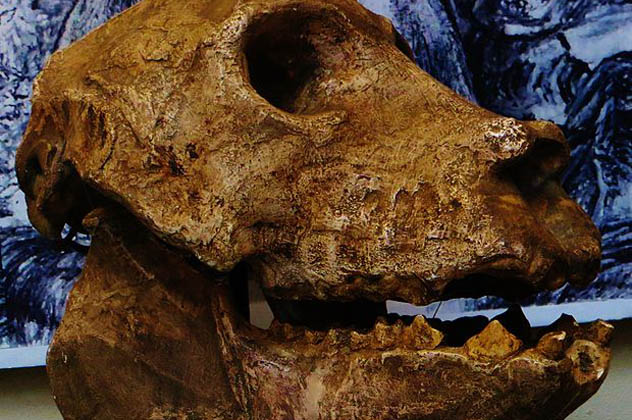 In Madagascar, prehistoric underwater graves were found containing the fossils of the giant animals that once dominated the island. Among these fossils were the remains of an extinct species of lemur weighing as much as 15 times its modern day relatives, elephant birds the size of basketball players, and enormous tortoises.

Three sunken caves located at Tsimanampetsotsa National Park yielded an enormous amount of bones representing thousands of years of Madagascar’s history. One of the caves was so filled with fossils that every time divers felt the floor of the cave they found new bones—the most important find being the Archaeoindris, a species of lemur the size of gorillas. The most obvious theory about why Madagascar’s megafauna were found in the caves is that they were chased there by the arrival of humans. Many species would have hidden themselves to avoid being hunted, but over the past millennia, the majority were killed off. 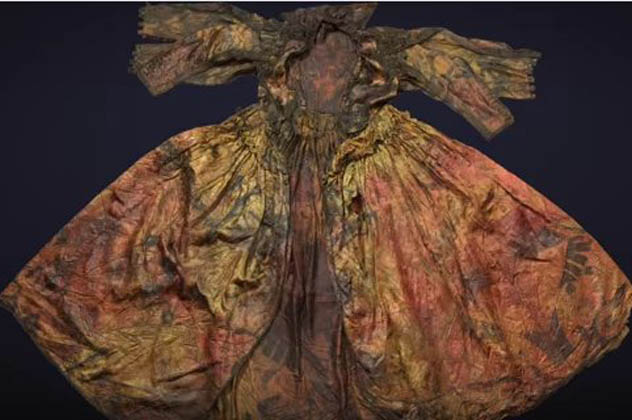 Texel and Eyerland, which later merged to become the island of Texel, were important way points for traders going to and from Holland. But the Wadden Sea around the islands is a dangerous place, and many ships have sunk there over the years. From this treacherous area, a fantastic discovery was made: the 400-year-old possessions of an English noblewoman.

The discovery was made from a 17th-century chest that contained a preserved silk dress, undergarments, a lice comb, and a leather-bound book stamped with the royal seal of King Charles I, suggesting a member of nobility. The silk dress was the most important discovery, and while it most likely was more of an everyday garment because of the lack of decorous beads and complex designs, it also reveals a wealth of information about how garments were made at the time. 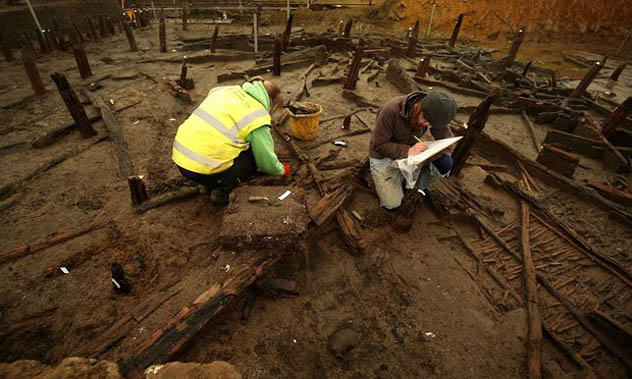 Three thousand years ago, Bronze Age houses near the Peterborough quarry in Great Britain burned down but were preserved almost perfectly by silty fen. The near-pristine condition that the dwellings were found in have been compared to the conditions of Pompeii, and the findings at the Peterborough sight are just as impressive.

The homes remain the best preserved Bronze Age dwellings in Britain. They are large wood dwellings built on stilts in a waterlogged area near the Nene River. Inside are artifacts ranging from delicate drinking cups to the last meal the owners had. It appears that whoever lived in the homes fled and left the meal, which had calcified in the cooking pot. The houses most likely belonged to wealthy people because of the amount of material goods found. The cause of the fire that burned the houses is unclear. It may have been an accident, intentional, or even a military attack.