To make impressive art, special skills are needed to distinguish the artist. In some cases, artists knowingly and unknowingly include clues that shed light on their personal lives, desires, and techniques, And many of these clues are hidden in nearly plain sight. 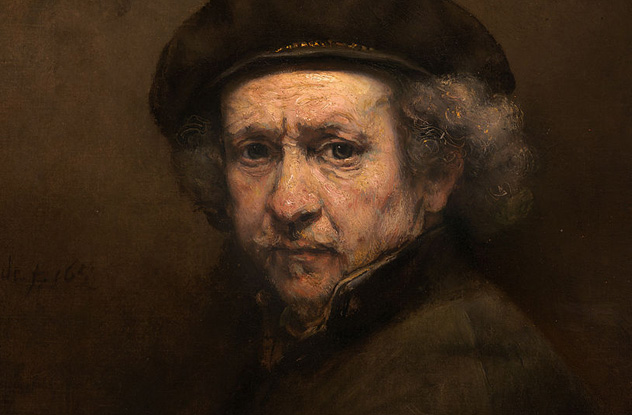 Rembrandt is famous for his use of light, and while many other artists of the time used light in a similar manner, none of them could capture the beauty that Rembrandt put on the canvas. Over the years, Rembrandt’s techniques have been uncovered based on details in his paintings.

To create almost photographic accuracy, Rembrandt manipulated his surroundings using mirrors and lighting, much like many photographers use today. For his self-portraits, Rembrandt used a complex series of flat and concave mirrors along with projectors like the camera obscura to get the closest possible likeness. During his lifetime, Rembrandt never revealed his technique, and it wasn’t until art historians tried out the mirror system did they discover the secret to his greatness.

9The Music In The Last Supper

Leonardo Da Vinci was not just talented in art but in other creative fields like music and writing. Apparently, in one case, he combined his talents to create a very interesting Easter egg in one of his most well-known paintings.

The Last Supper contains an interesting feature: a musical score. On the table in the painting, the bread and the hands of Christ and the apostles are placed in such a way that it creates a composition. When read right to left in the same manner as Da Vinci wrote, a coherent score can be made out and creates a harmony about the passion of Jesus. 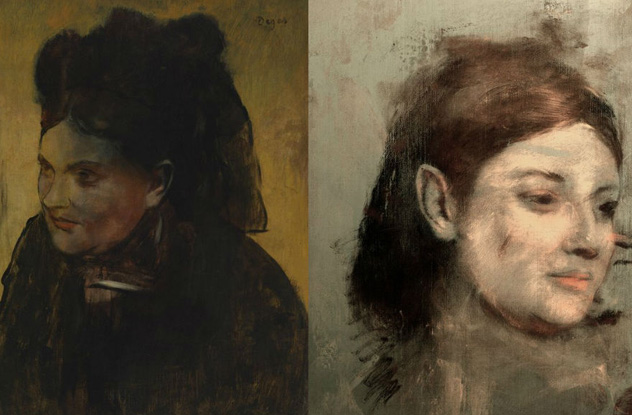 Between 1876 and 1880, Edgar Degas worked on a painting known simply as Portrait of a Woman. The title is an apt one because it really is nothing but a woman wearing black, but beneath it, another portrait emerges.

As early as 1922, discoloration and other odd details were noticed, but nothing further was investigated. Using modern X-ray technology, we can finally find what Degas had painted before.

In 2016, after a 33-hour examination, it was determined that Degas had painted another woman entirely, most likely his early model and muse Emma Dobigny. A similar portrait to the one beneath the Portrait of a Woman actually exists, but is in a private collection and is rarely shown. This painting was a most likely a different draft that Degas later painted over. 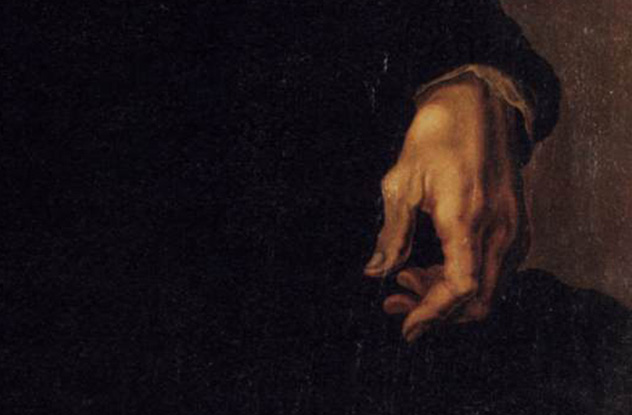 Michelangelo lived to the extraordinary age of 89 and died in 1564, and signs showed that despite his continued efforts, he struggled with an illness common in older people today: osteoarthritis.

In the years before his death, Michelangelo stopped signing his own name to paintings, depending on others to do so. He also stopped painting in any form, turning rather to the hammer and chisel to create art.

In letters to his nephew, Michelangelo complained of “gout” and stiffness in his hands. At the time, gout was a term for discomfort in virtually any joints in the body, but Michelangelo specifically mentions his hands as being in pain. Portraits of Michelangelo in old age show hands that are quite similar to those of modern-day arthritis sufferers. 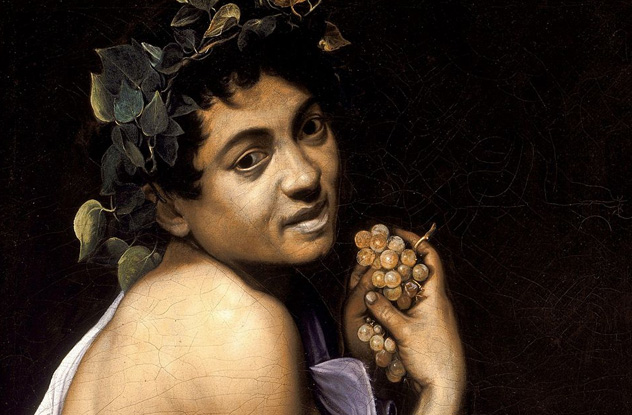 In 1592, the famous painter Caravaggio arrived in Rome and began living there, but he became extremely ill and was forced to stay at the Santa Maria della Consolazione for six months. There, he began his famous painting Self Portrait as Sick Bacchus or Bacchino Malato. The skin of Bacchus is yellow, a symptom of jaundice, for which Caravaggio was being hospitalized at the time.

Bacchus, according to Roman mythology, was the god of wine. Seeing that symptoms of chronic alcoholics included jaundice, Caravaggio considered himself the most accurate model for the alcoholic god. Caravaggio’s use of his own suffering to portray Bacchus dying from his drinking shows the devotion and connection the artist felt for his work. 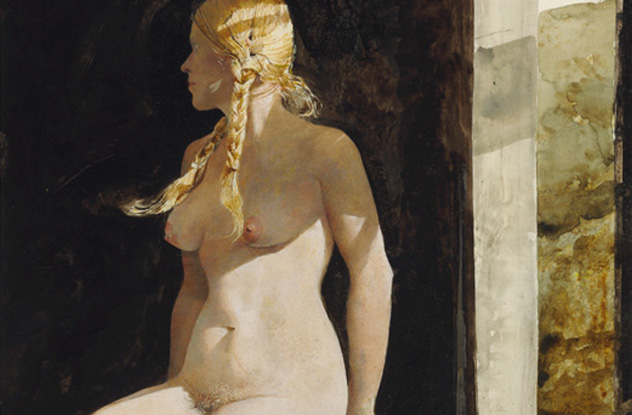 In the mid-1980s, American artist Andrew Wyeth shocked the art world by unveiling over 200 portraits he had created of the same woman over the course of a decade. These paintings and drawings became known as the Helga pictures, but during the time Wyeth created them, they were a complete secret; not even Wyeth’s wife knew about the pictures.

Only one person knew about the Helga’s: Nancy Hoving, a friend of Wyeth’s, whom he swore to secrecy. According to Hoving, Wyeth “liked to have secrets . . . so he could reveal them.”

Many of the pictures depict model Helga Torsef nude. According to Wyeth, his wife was uncomfortable with him painting nude models, so Wyeth, out of respect for her, chose not to reveal their existence until he released them to the public.

4Picasso’s Man In The Blue Room 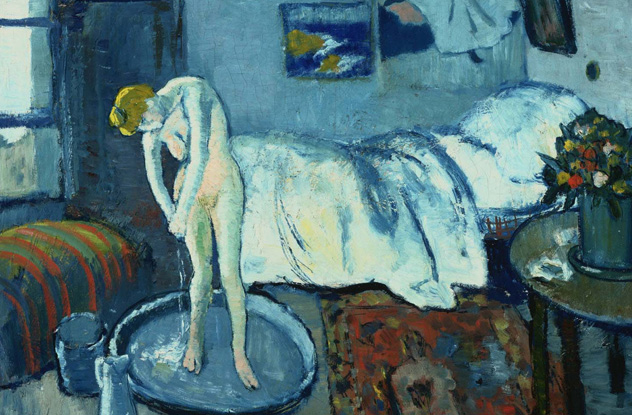 Picasso painted The Blue Room in 1901 during his distinctive Blue Period. At the time, Picasso was incredibly poor and depressed. Using blue pigments, he expressed his melancholic state, but The Blue Room has always fascinated historians because of the strange brushstrokes used.

When examined by infrared technology, a mysterious man was found. Beneath the painting, there is an image of man wearing a bow tie. We have no idea who he was and why Picasso painted him. It is possible that the man could have been Ambroise Vollard, a Parisian art dealer who gave Picasso his first exhibition. All we know is that Picasso couldn’t afford canvasses, so he was most likely working on the picture of the bow-tie man when he received the inspiration to paint the The Blue Room and decided to paint over the unfinished portrait. 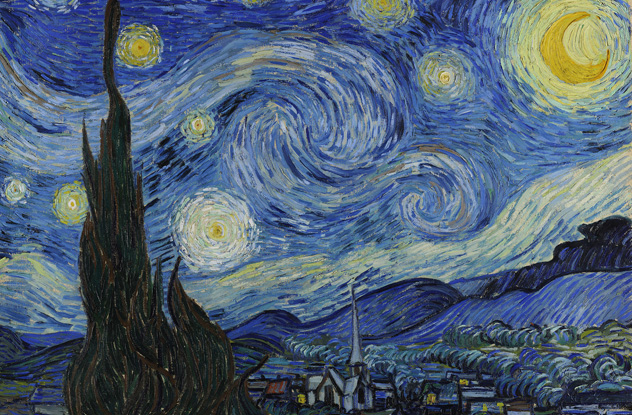 One of Van Gogh’s most distinct artworks is Starry Night, which he painted in 1889 while committed to a mental asylum. This was during one of Van Gogh’s worst psychotic episodes, but from this, he created an artwork that, not known until now, contained a scientific fact not discovered until the 1940s long after his death.

Turbulence and the turbulent flow has been said to be harder to describe than quantum mechanics, but in Starry Night, he actually depicted perfect turbulence. Other paintings during his time at the asylum also depict perfect turbulence, which has led researchers to believe that during his times of mental instability, he somehow had the ability to see and paint turbulence decades before it was first described. 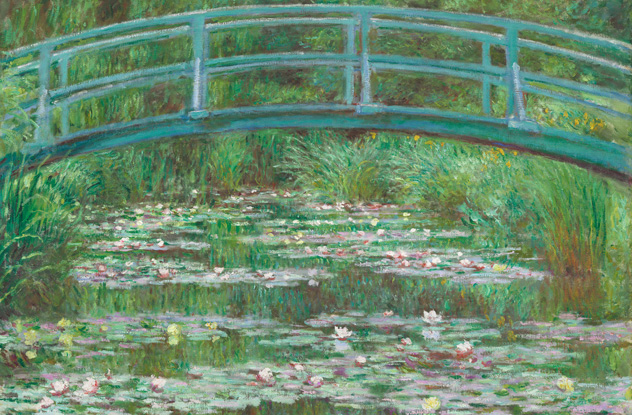 One of the hallmarks of Impressionism is hazy and blurry paintings quite different from the realism in centuries past. One of the main artists of the Impressionist movement was Claude Monet, but Monet’s paintings became progressively fuzzier as years past and the colors began to dull. This deterioration in his art can be explained by cataracts that increasingly afflicted him as he grew older.

From the late 1880s to 1923, his cataracts both obscured his eyesight and blurred colors. This is most evident in two paintings from 1922: The Japanese Bridges, where Monet used unusually striking colors. This was during the worst of Monet’s cataract woes, and he may have painted from memory, overcompensating certain colors and shades in his attempt to paint accurately.

In 1923, Monet finally agreed to surgery and burned many of his old paintings because he realized how awful his eyesight was. These, however, survive as a testament to his decades of suffering. 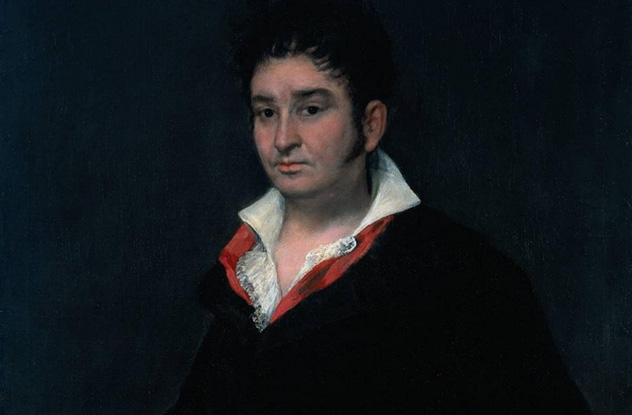 In 1823, The Spanish artist Goya painted the portrait of Don Ramon Satue, a Spanish Supreme Court judge. Beneath the portrait, however, possibly lies a figure far more important and even infamous in Spanish history: Joseph Bonaparte, the brother of the French emperor Napoleon. Joseph Bonaparte was briefly appointed king of Spain by his brother and ruled from 1809 to 1813.

X-rays used on the panting revealed the figure and found the medals and the uniform he wore. He was obviously an important man because he wore medals linked to an order created by Bonaparte. The portrait was painted sometime during Bonaparte’s reign as king, and Goya took great pains to conceal it.

Goya survived many of the political upheavals in Spain throughout the early 1800s and after Napoleonic forces withdrew from the country, and by 1820, it would have been dangerous from Goya to have anything associated with the regime. Thus, he covered up the portrait with that of Don Ramon Satue, and his secret was hidden for the next 200 years.