Shrouded in fog and rain, the landscape of England is perfect for mysteries. The following ten mysteries offer up a smorgasbord of the unexplained, from ghost sightings to unsolved murders to inexplicable weather patterns. 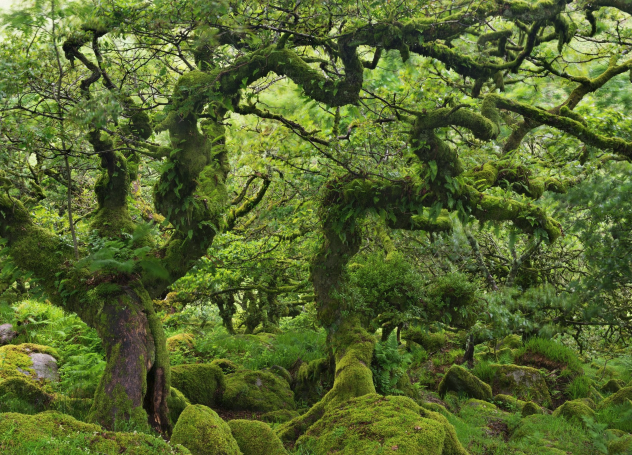 Photo credit: Alamy via The Guardian

Tucked away in Dartmoor’s Wistman’s Wood, this supposedly haunted forest in Devon contains hundreds of twisted trees and moss-covered stones. A common story involving Hellhound’s Heaven concerns a hooded figure in dark robes that walks with a pack of hellhounds. If any human dares to enter the forest, the spectral man threatens to steal their soul.

Besides the ghost of Hellhound’s Heaven, Dartmoor is awash in eerie legends. From the feline Beast of Dartmoor to the relatively new “Demon” of Dartmoor, Devonshire may be the heart of supernatural England. No wonder Sir Arthur Conan Doyle decided to set his spookiest Sherlock Holmes story, “The Hound of the Baskervilles,” in Dartmoor.

As for Hellhound’s Heaven, rational minds believe that the forest’s sinister reputation is based on the fact that Wistman’s Wood was allowed to grow wild, thereby making the area dense in vegetation. Others believe that the many ghosts are due to the fact that Dartmoor was once roamed by druids and other pre-Christian peoples who actively engaged in pagan rituals. 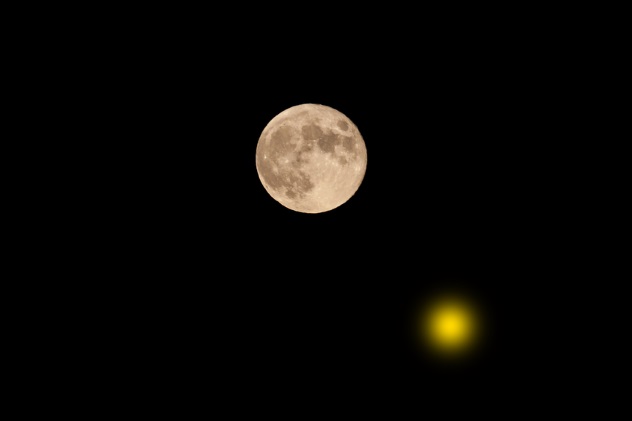 Howden Moor sits in the mountains of the Peak District of Northern England. The Peak District has witnessed several airplane crashes over the years, particularly in and around the area known as the Dark Peak.

On March 24, 1997, with a full moon in the sky, a strange object was seen. At 10:15 PM, two local farmers called the police and asked if the Royal Air Force was conducting training exercises on the moor. They claimed that they saw low-flying aircraft accompanied by a bright yellow light. Several more callers reported seeing similar aircraft and hearing sonic booms near the Dark Peak. While some believed that two RAF jets had crashed somewhere in the area, others claimed that some sort of UFO crashed on Howden Moor.

Initially, the authorities responded to the weird occurrence by deploying a large emergency response team overseen by the South Yorkshire Police. Before long, however, the official line became that nothing had crashed on the moors that night. Since then, many conspiracy theorists claim that the whole thing was covered up to hide the fact that extraterrestrials were involved. 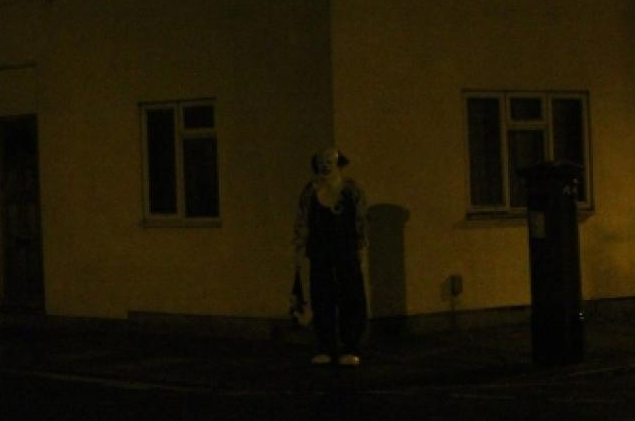 On September 13, 2013. a malicious-looking clown with a white face and red wig was seen by late-night strollers. He was seen again on Cedar Road the next day. The sightings and captures of the clown on CCTV footage caused an immediate flurry of comments on social media, with many users pointing out that he looked an awful lot like Pennywise, the murderous antagonist in Stephen King’s It.

By September 19, the clown decided to break his silence. Although he didn’t reveal his identity, he claimed his shocking appearances were all done in the spirit of fun. Northampton residents with coulrophobia probably didn’t agree.

In the wake of the Northampton clown, a slew of copycats in Northwest England began pursuing a more criminal angle. In the late winter and early spring of 2014, several people in Greater Manchester reported to police that they had been either been chased away by clowns or had witnessed clowns following children to school.

At the Manchester Museum, a 4,000-year-old Egyptian statue has frightened curators and observers alike for many years. The statue, known as Neb-Senu, is a 25-centimeter-tall (10 in) soul container that was made sometime around 1800 BC for a single man. The statue has reportedly frequently moved inside its glass case.

Despite some sensationalist stories about how the statue may be related to the “curse of the pharaohs” unleashed by Howard Carter, a hired team of experts apparently deduced that outside car traffic, along with foot traffic from visitors, explained why the statue moved so often. Still, many observers remain baffled that vibrations alone could cause an ancient stone relic to spin almost completely around. 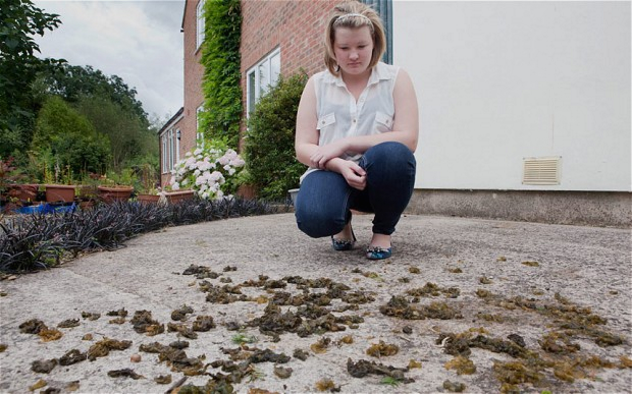 England is known for rain, but not the sort that touched down on Berkeley, Gloucestershire, in August 2012. A tornado in Clevedon Beach, Somerset, caused seaweed to fill the sky and scatter all the way to Berkeley. Almost a year later, another heavy rainstorm dropped algae onto gardens and driveways in Berkeley.

Many observers were genuinely confused by the mechanics of lifting algae all the way from Somerset to Gloucestershire. As it stands today, the most common explanation is that an updraft from the storm lifted ocean water from Somerset that contained both seaweed and algae and transplanted it all the way to Gloucestershire. That being said, a solid answer hasn’t been produced as to why residents would still find some of these marine items a whole year later after yet another rainstorm. 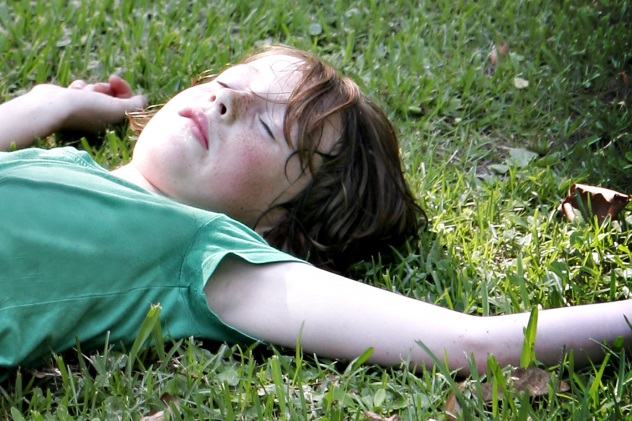 During a brass band competition near Kirby-in-Ashfield, Nottinghamshire, in 1980, some 300 children were suddenly overtaken by sore eyes and throats, vomiting, and leaky noses. Eyewitnesses also reported seeing several children faint. Most of the affected were taken to local hospitals, but only nine were kept overnight.

At first, the story was considered a case of mass hysteria caused by something unknown. Later, in 2003, it was theorized that tridemorph, which was banned in 2000, had been sprayed in a nearby field not long before the competition. Subsequently, the children breathed in the harmful chemical, and a combined situation of mass hysteria and chemical contamination arose.

While the pesticide theory has many supporters, others contend that mass hysteria was the sole reason for the incident. A small minority even believes that radio waves and aliens were to blame. After all, how could a chemical classified as “moderately hazardous” cause so many children to faint? 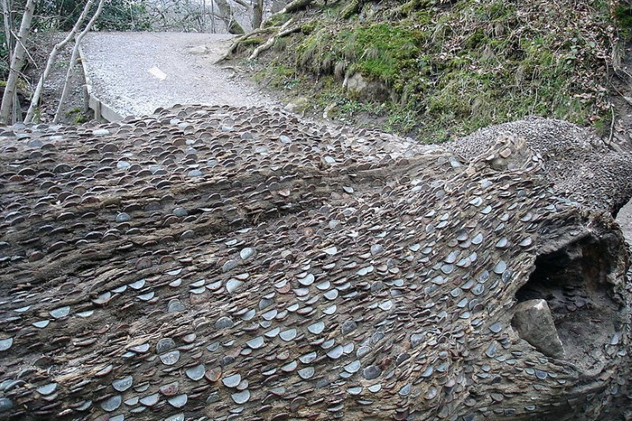 The existence of coin trees, or money trees, in Great Britain is not entirely mysterious. Obviously, people are responsible for hammering coins and other forms of currency into downed trees all over the country. The real mystery is why they do it. Some believe that the tradition is done for good luck, while others assert that Britain’s coin trees may have something to do with a fertility ritual, whereby the amount of coins hammered in corresponds to the amount of children a couple has.

Whatever the explanation, these “wishing trees” have a habit of springing up almost overnight. In one instance, after a tree fell in the Welsh village of Portmeirion in 2007, a small army of 2p coins appeared. By 2011, seven trees in the area had received similar treatment. Other trees in places like Gwynedd and the far-flung villages of Scotland seem to highlight the fact that “wishing trees” are part of a shared British folklore.

3 The Devil’s Footprints In Devon 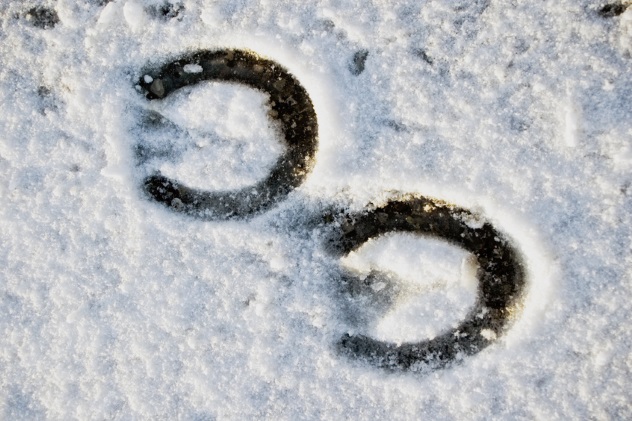 The story of Devon’s strange tracks begins on February 8, 1855. On that date, residents awoke to a fresh blanket of wet snow. In the snow, they found a trail of footprints that stretched for over 160 kilometers (100 mi). The tracks, which looked like they came from a bipedal creature with cloven hooves, apparently traveled through houses and over roofs and were almost scorched into the earth.

As can be expected, many blamed the tracks on Satan. Newspapers at the time blamed a kangaroo that had escaped from a private zoo. Intriguingly, a similar thing had apparently happened before. Ralph of Coggeshall recorded that on July 19, 1205, bizarre hoofprints were found after an electrical storm.

The closest thing to a scientific explanation for the 1855 hoofprints is that freezing rain may have caused the strange patterns in the snow. Animals have been ruled out, which essentially means that the mystery may never be solved.

2 The Ghost Of Hampton Court

England is supposedly so full of ghosts that their presence is no longer worth raising an eyebrow. That being said, in 2003, CCTV cameras captured one of the most frightening-looking ghosts in recorded history. Nicknamed “Skeletor,” the ghost belongs to Hampton Court, a Tudor-era palace that once belonged to Cardinal Thomas Wolsey.

For three days during the winter, security cameras captured strange events occurring near one particular fire door. On the first day, the doors were flung open by an unseen hand. During the second day, the ghost appeared, while on the third day, an invisible hand once again threw the doors wide open.

Believers speculate that the ghost is none other than the palace’s “Grey Lady,” a well-known apparition believed to be one of Henry VIII’s many wives. Skeptics assert that the “ghost” is nothing more than a tour guide in costume.

1 The Murder Of David Ombler 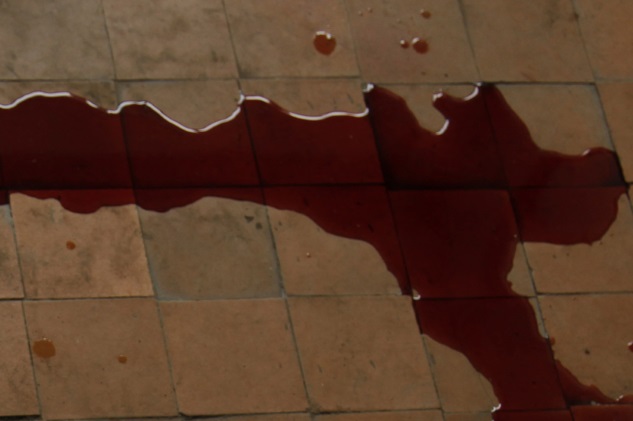 The 1914 murder of David Ombler remains one of the oldest cold cases in Great Britain. On May 30, Ombler, a 72-year-old market trader in the city of Hull, was found dead on his kitchen floor, the victim of a savage beating that included a fire poker and a pair of tongs.

According to newspapers at the time, the wealthy Ombler may have been killed by an unknown stranger who had been seen lurking around his grocery store earlier that morning. The mysterious individual was described as “shabby,” a not-so-subtle hint that he was likely a vagrant or an itinerant worker. By 8:00 AM, when Ombler’s housekeeper arrived, the killer had fled the scene, leaving behind a broken fire poker and Ombler’s bloody corpse.

Since 1914, few leads have developed in the Ombler case. It’s highly unlikely that it will ever be solved. At best, authorities have tepidly supported the idea that Ombler was killed during a robbery.