For 30 years, Genghis Khan and his Mongolian horde swept through Asia, slaughtering over one-tenth of the people on Earth and conquering nearly one-quarter of the land. His was the most violent reign in all of human history.

Most people know Genghis Khan through the statistics, but the details are just as mind-boggling. Some stories from his life and his battles are outright unbelievable—and among the most brutal stories you will ever hear.

10 He Killed His Brother for Not Sharing His Food 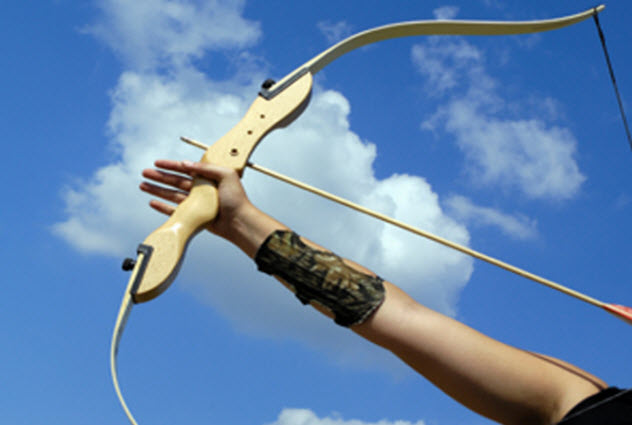 Genghis Khan was born the son of a powerful chieftain, but his situation changed when an enemy tribe poisoned his father. The young boy and his family were cast out of their home and forced to scavenge for food, mostly eating plants and discarded carcasses they found on the roads.

When he was 14, Genghis Khan found a fish and brought it back to his family, only to have his half-brother Behter snatch it from his hands and refuse to share a bite with anyone else. Furious, Genghis Khan stalked his brother until he was alone—and murdered him with a bow and arrow.

Genghis Khan didn’t get away with his first murder completely, though. History reports that his mother “scolded” him, so he at least got a good talking-to about how, in this family, we don’t murder our siblings.

9 He Beheaded People for Being Over 90 Centimeters (3′) Tall 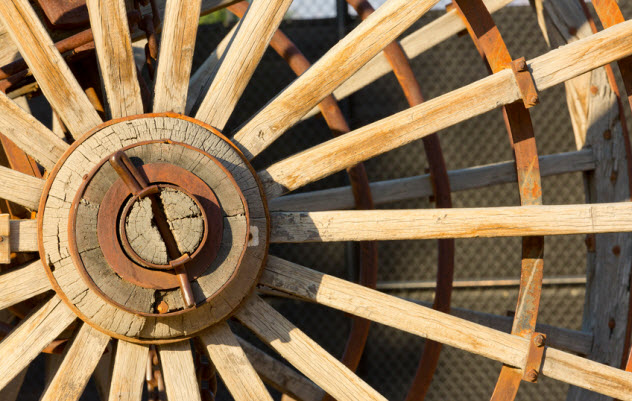 When Genghis Khan was 20, he led an army against the tribe that killed his father and got his revenge. The Tatar army was crushed, and Genghis Khan set about exterminating the people in an incredibly unusual way.

Every Tatar man was lined up and measured against “the linchpin of a wagon,” which is the axle pin in the middle of the wheel. Anyone taller than these pins—which were 90 centimeters (3′) high—was to be beheaded.

In effect, Genghis Khan’s order slaughtered every male Tatar but the infants.

8 His Victims’ Bones Were Mistaken for Mountains 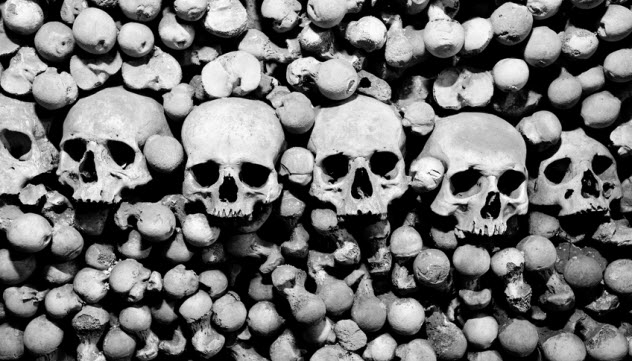 In 1211, Genghis Khan turned his focus to modern-day China and attacked the Jin Empire. It was a reckless decision. The Jin Empire controlled 53 million people, and the Mongols had one million. Still, Genghis Khan won.

Within three years, the Mongols had made their way to Zhongdu (now Beijing). The city walls were 12 meters (39 ft) high and stretched 29 kilometers (18 mi) around the city. It seemed impossible to get in, so they didn’t try.

Instead, the Mongols starved Zhongdu out. By summer 1215, the people there were so hungry that cannibalism was running rampant inside its walls. Finally, they surrendered, and the Mongols sacked and burned the city.

The massacre was horrific. Months later, a passing eyewitness wrote that “the bones of the slaughtered formed white mountains and that the soil was still greasy with human fat.”

7 An Enemy Archer Shot Genghis Khan, So He Made the Archer a General 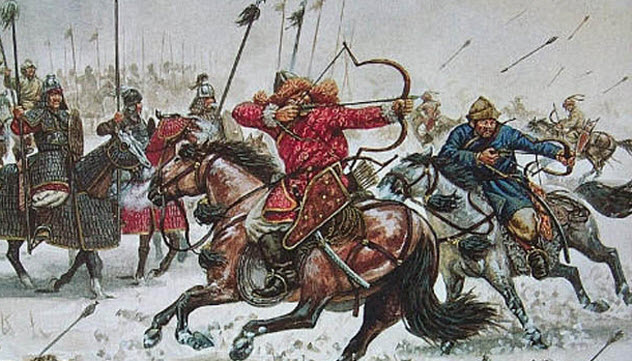 While at war with the Mongolian Tayichigud clan, Genghis Khan’s horse was hit. An arrow sailed into the animal’s spine, and the horse fell beneath the warlord’s legs, nearly killing him in the process.

His army marched on and won the battle, and Genghis Khan went out for revenge. He demanded to know who had fired the arrow. He didn’t expect anyone to confess, so he was probably looking for an excuse for another genocide.

But the archer Jebe stepped forward, confessed to the deed, and told Genghis Khan to kill him if he wanted to. Genghis Khan was impressed, so he made Jebe a commander in his army.

Jebe later rose to be a general and one of Genghis Khan’s most trusted friends—all as a reward for nearly killing him. 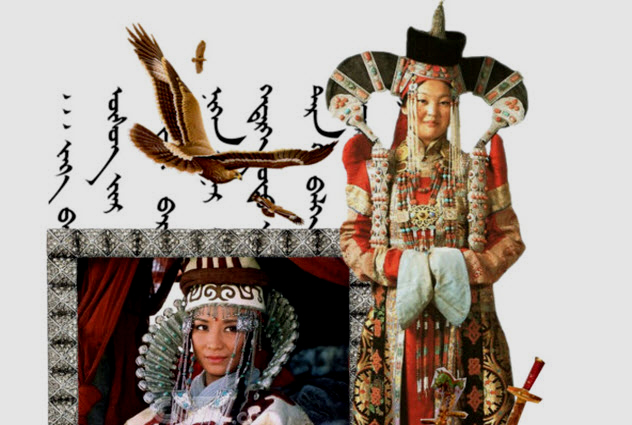 One of the biggest ways Genghis Khan seized power was by marrying off his daughters to the kings of his allies. When Genghis Khan was behind it, though, even marriage was a death sentence.

For the privilege of marrying one of Genghis Khan’s daughters, the kings were required to cast out every other wife they had. This wasn’t because he was dedicated to monogamy. It was to make sure that his daughters were the only people in line for the throne.

The kings were then sent to the front lines of the Mongolian army. Almost everyone died in combat, and his daughters took over their kingdoms. By the time of Genghis Khan’s death, his daughters ruled an area stretching from China’s Yellow Sea to Iran’s Caspian Sea.

5 He Exterminated 1.7 Million People to Avenge One Person 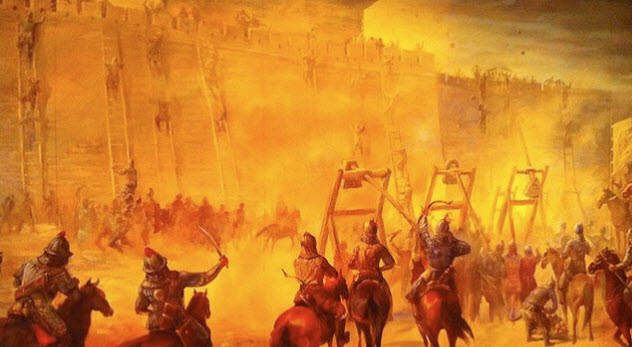 The marriages might have been strategic alliances, but that didn’t mean there wasn’t any love involved. One of Genghis Khan’s daughters loved her husband, a man name Toquchar. Genghis Khan loved him, too, as his favorite son-in-law.

When Toquchar was killed by an archer from Nishapur, his wife demanded vengeance. Genghis Khan’s troops attacked Nishapur and slaughtered every person there. By some estimates, 1,748,000 people were killed. Other historians dispute that number, but there’s no doubt that his armies killed everyone they found.

Women, children, babies, and even dogs and cats were tracked down and murdered. Then they were beheaded, and their skulls were piled into pyramids—a request by Genghis Khan’s daughter to ensure that no one got away with a simple wounding. 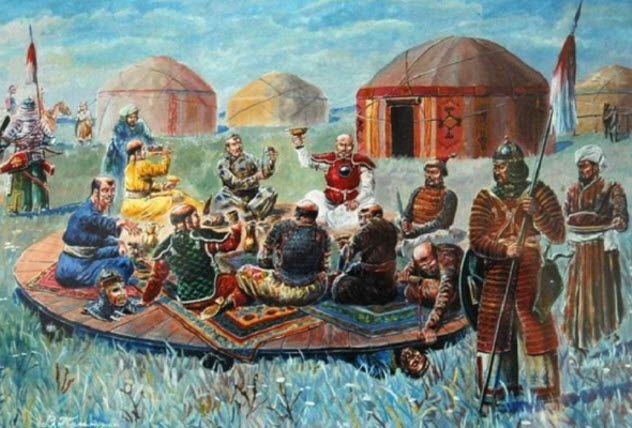 In 1223, the Mongolian army was making its way through Russia and had just won the Battle of the Kalka River. The Russian army had surrendered, their towns had been captured, and the Mongolians decided to celebrate.

The generals and nobility of the Russian army were forced to lie down on the ground. Then a heavy wooden gate was thrown on top of them, chairs and tables were set on top of the gate, and the army sat down for a feast.

They held their victory celebration on top of the still-living bodies of their enemies, eating and drinking while Russian princes were crushed to death beneath their feet. 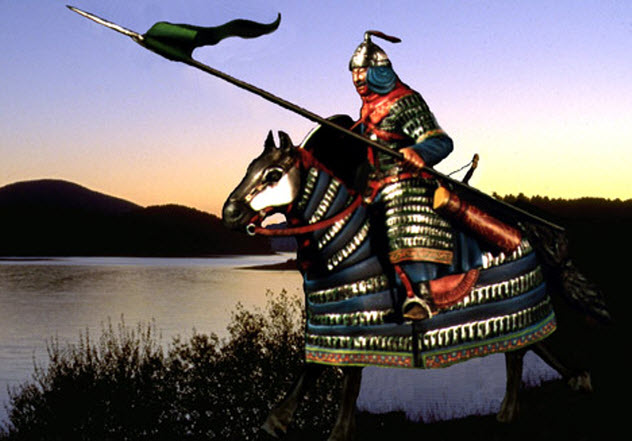 When Genghis Khan found the Muslim kingdom of Khwarezmia, he did something unusual: He took the peaceful route. A group of diplomats was sent to the city, hoping to establish a trade route and diplomatic ties.

The governor of Khwarezmia, though, didn’t trust them. He thought the diplomats were part of a Mongolian conspiracy and had them executed. He killed the next group they sent, too.

Genghis Khan was furious. He had tried to be nice, and he’d been repaid with dead diplomats. He set up an army of 200,000 soldiers, attacked, and completely destroyed Khwarezmia.

Even after he’d won, Khan sent two armies to burn down every castle, town, and farm they found to ensure that no hint of Khwarezmia survived. According to one story, he even diverted a river to run through the emperor’s birthplace, just to make sure it would never appear on a map again. 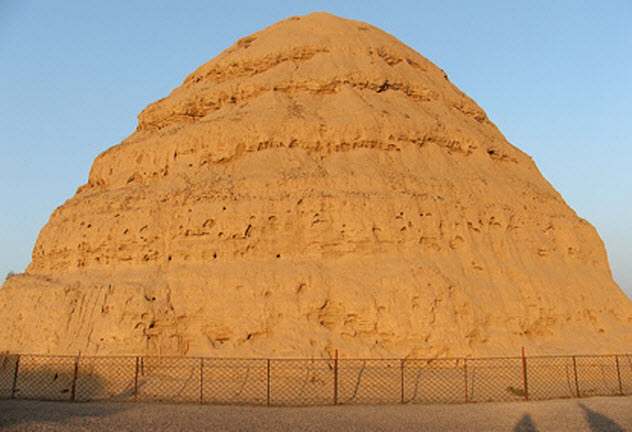 When Genghis Khan attacked Khwarezmia, he asked the conquered kingdom of Xi Xia to send him troops. They refused. Xi Xia tried to take a bold stand against their oppressor, and they quickly regretted it. The Mongolian army swarmed through Xi Xia, destroying everything that they found. They systematically exterminated every member of the population.

By the end, Xi Xia was erased from history. They hadn’t written down their own stories, so the only records of their existence came from neighboring countries. Their language wasn’t recovered for more than 700 years. It took until the mid-20th century for archaeologists to unearth stones that had their writing on them. In the meantime, every word they had spoken was forgotten.

Genghis Khan died during the battle, most likely from being thrown from his horse. Still, the Mongolian army carried out his work. They slaughtered every person they found, even after their leader was dead and their enemy had surrendered.

1 Everyone Involved In Burying Him Was Killed 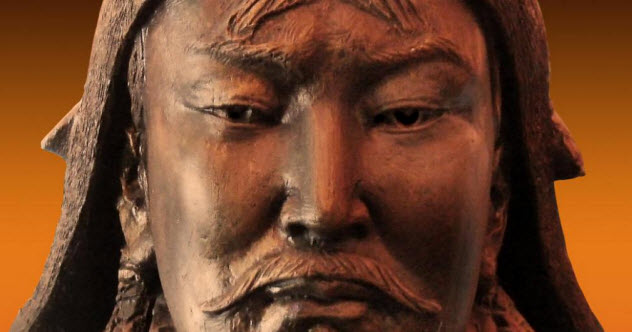 When Genghis Khan died, he wanted to be buried where no one could find his corpse. In honor of his wishes, his body was carried miles into the wilderness by a group of slaves escorted by soldiers.

The slaves buried Genghis Khan in a place no one would ever find. To make sure the slaves would never divulge the secret, the warriors massacred them and threw them into the grave. Then the soldiers rode their horses over it and planted trees on top of it to hide the spot.

When the warriors who buried him made their way back to camp, they were promptly slaughtered as well, just to make sure they would never talk. And so Genghis Khan died in a massacre like the ones that pervaded his life, hidden away in a tomb that has yet to be found.