Today, cars take up a significant part of our lives. They help us get from point A to point B with relative convenience and provide us with a freedom and independence that public transportation is mostly incapable of providing.

However, today’s cars are more or less uniform in terms of their style and features. So it is always fascinating to look back and see what might have been if the more curious automobile-related inventions of yesteryear had actually caught on. 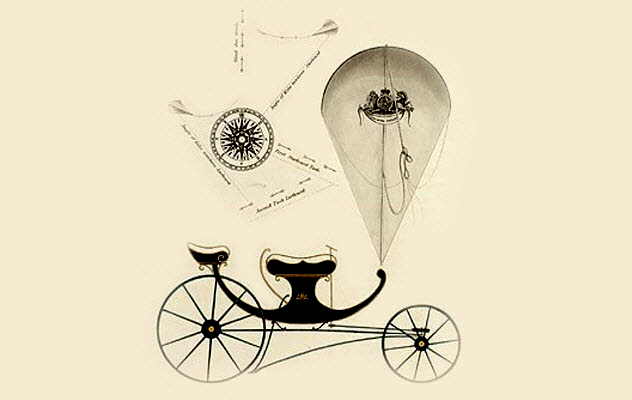 The Charvolant (aka the kite-carriage) was a carriage pulled solely by kites. It was invented in the 19th century by English schoolteacher George Pocock who had a great interest in kites and their ability to lift small items, light loads, and even people.

The Charvolant could hold several passengers and move at a fairly fast speed, depending on the pace and the type of wind present. Several reports of kite-carriages traveling around England circulated shortly after the bizarre invention and attracted considerable attention from the press and the public.

Pocock believed that Charvolants were the most pleasurable, safe type of travel and could be used for naval and military purposes as well as for crossing rivers. However, not everyone was of the same opinion. Critics stated that using wind for travel was not feasible because it is fickle and changeable, not to mention that it would suit only those who wanted to go in the direction toward which the wind was blowing. 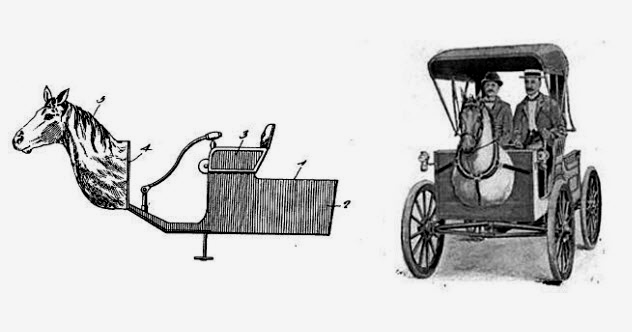 Back in the early years of the US auto industry, horse-drawn carriages and automobiles shared the roads. But the cars scared horses, resulting in dangerous situations. Nonetheless, a solution was soon proposed by Uriah Smith, a member of a strict Protestant sect known as the Seventh-day Adventists.

Smith had designed a car that had a big wooden horse head stuck on the front of it. As an added bonus, the hollow head of the horse also served as a fuel tank.

Smith’s logic was simple: If a car looked like a horse, other horses wouldn’t be scared of it. By the time the horse could discover its error, the strange automobile would be long gone and the horse would have no reason to grow frantic. Unsurprisingly, the Horsey Horseless did not take off. It is unclear if it was ever even produced. 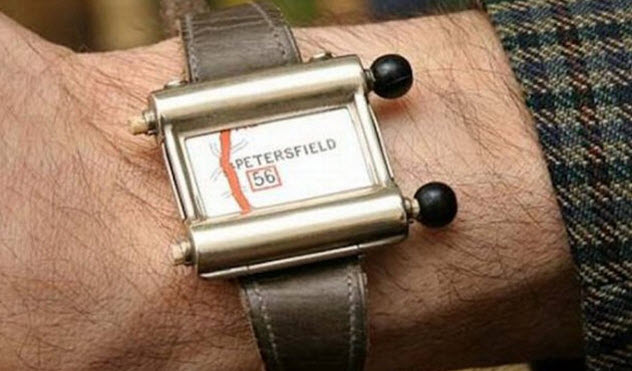 The Routefinder was an early satellite navigation system that showed UK automobile drivers the roads they were traveling down, the mileage covered, and the end point of their journey. The curious device consisted of a little map scroll inside a watch which was to be manually scrolled as the driver moved along the route. Several scrolls could be fitted into the watch for a trip.

The disadvantages of the Routefinder included a limited number of available journeys, the inability of the system to respond to changes of direction, and no warning of roadwork or traffic ahead. The Routefinder never took off since automobile drivers were scarce in Britain at that time. 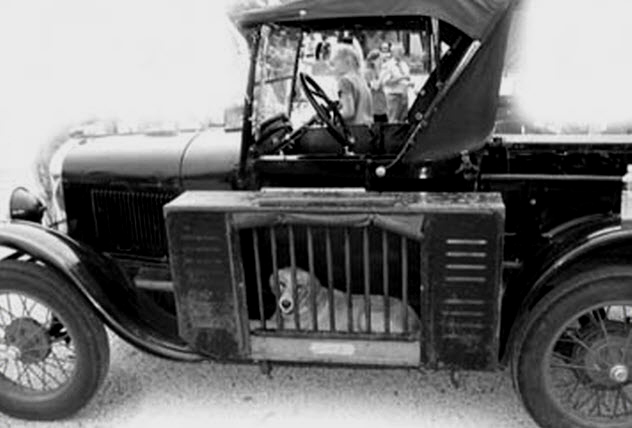 Back in the day, if you didn’t want your dog riding inside your car, it could ride “safely” on a running board attached to the car. Some were simple running board–based boxes and shields while others, such as the Bird Dog’s Palace, were sturdy external steel enclosures.

The latter were quite elaborate. They came in several sizes and included a barred door that could be released without the driver leaving his seat and an oilcloth cover that could be unrolled and buttoned into place if the weather got bad.

The most terrifying and dangerous pet carrier must have been the dog sack, an actual canvas sack that (thankfully) had a head hole and was hooked and clamped to the side of the car. 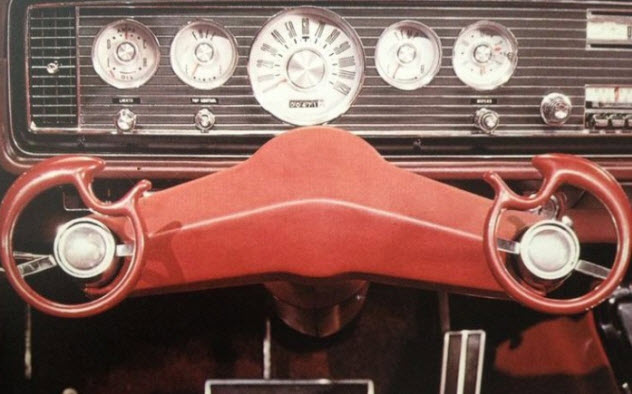 In 1965, Ford engineers came up with the Wrist-Twist steering system which replaced one large steering wheel with two small handheld wheels that were twisted like dials. The new system promised a more comfortable ride, a better view of the road, and easier parallel parking.

It was said that the steering effort required by the Wrist-Twist was only a fraction of the effort required by a regular steering wheel. This was because only the forearm, wrist, and hands were involved as opposed to the full arm, torso, and the neck involved in standard steering.

Adaptation to this new kind of steering was said to be instantaneous. It is worth mentioning that the man who engineered the Wrist-Twist was actually a missile engineer who knew nothing about cars. 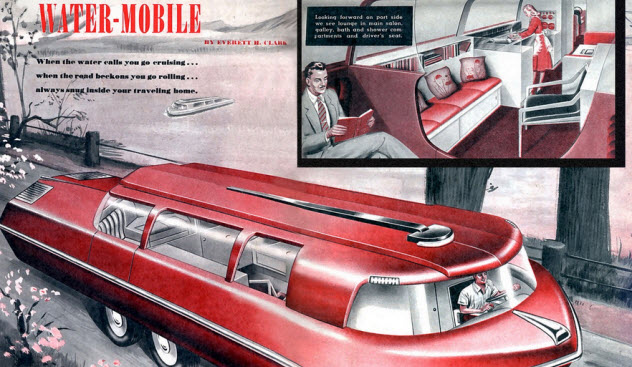 The water mobile (aka the Vacationer) was an amphibious luxury cruiser proposed by industrial designer Robert Zeidman. His interest in amphibious vehicles came from wartime service. Unsurprisingly, the water mobile was to be targeted toward ex-GIs who could finally have their own amphibious crafts.

The six-wheeled water mobile could turn into a yacht or a trailer, thus providing the best of both roads and water. It was supposed to be 10 meters (34 ft) long and could house up to six people.

Amenities included a stove, shower, dishwasher, sink, oven, fridge, freezer, and bathroom. A bunk could also be built into the driving compartment for those drivers who wished to hire a paid chauffeur-pilot. 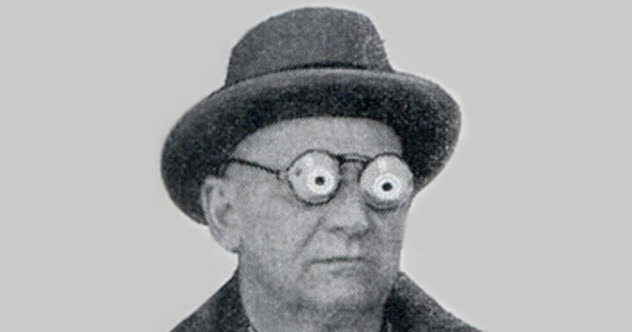 Glare-proof glasses were cone-shaped shields fastened onto regular spectacle frames. Holes were cut in the middle of the 2.5-centimeter (1 in) shields to give the wearer visibility.

Glare-proof glasses eliminated headlight glare from approaching cars. When meeting an oncoming car, the driver would simply turn his head slightly to the right, which would automatically cut off the glare from the car lights and allow the driver to focus on the side of the road.

This helped drivers to avoid road accidents. But the same could not be said for drivers who, upon sighting individuals adorned in these ridiculous glasses, would burst into a fit of laughter and possibly lose control of the wheel! 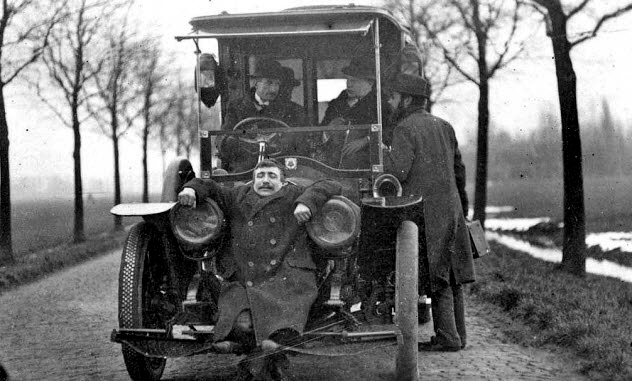 Pedestrian safety devices were placed in front of early cars to catch pedestrians who had been hit by cars. They were patterned after the cowcatcher device, which was invented in 1838. That device was attached to the front of a train to clear obstacles off the track.

Pedestrian safety devices varied in both their form and their precise function. Some, such as the Protector, were made in the form of seats so that a pedestrian who had been hit would be scooped up from the street and propped up onto the seat.

Others, such as the Man-Catcher, rolled a fallen pedestrian in front of the vehicle until the vehicle could be brought to a stop. This saved the pedestrian from being crushed to death.

Most people hate parallel parking and avoid it at all costs. Thus, it is a shame that fifth-wheel parking, a system invented by Brooks Walker in the 1950s, never took off. Fifth-wheel parking was a system that was supposed to ease the difficulty of parallel parking. It used a hydraulic pump and the car’s spare tire, fitted underneath the car, to guide the car in and out of parking spaces with ease.

Walker’s first prototype was created on his own Packard Cavalier sedan, and he demonstrated his fifth-wheel parking at numerous auto shows in 1953. The big car companies were not enthused, however, and the next 20 years saw Walker fitting and modifying different cars to further develop his system.

His ultimate goal was to create a system that could be applied to any car with no changes to its basic structure. As we know today from our continued struggle with parallel parking, his system was never implemented. 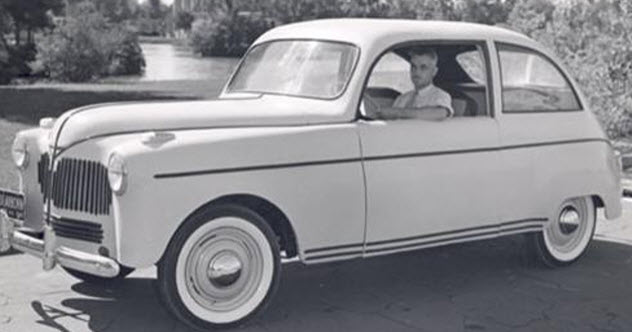 In the 1940s, Henry Ford experimented with making plastic parts for automobiles. These experiments eventually resulted in what became known as the Soybean Car or, more recently, the Hemp Car.

The frame of Ford’s Soybean Car was made of tubular steel and had 14 plastic panels attached to it. The exact ingredients of the plastic panels are unknown, but it is believed that they were made from a chemical formula that included ingredients such as soybeans, wheat, hemp, flax, and ramie.

The Soybean Car was designed for a number of reasons. First, Ford wanted to engage in a project that combined industry with agriculture. Second, there was a shortage of metal at the time due to the ongoing world war and Ford hoped that his new plastic materials would eventually replace the traditional metals used in cars. Finally, Ford claimed that plastic panels made the car safer than traditional steel cars.

In 1941, Ford unveiled the Soybean Car at the annual community festival called Dearborn Days. By that time, however, America’s entry into World War II had suspended all auto production. When the war ended, an abundance of cheap metal quickly ended the appeal of the plastic car.