Thousands of firearms have been invented since the discovery of gunpowder. Yet only a few have been widely adopted. Most have become forgotten firearms, some with wildly unusual characteristics. 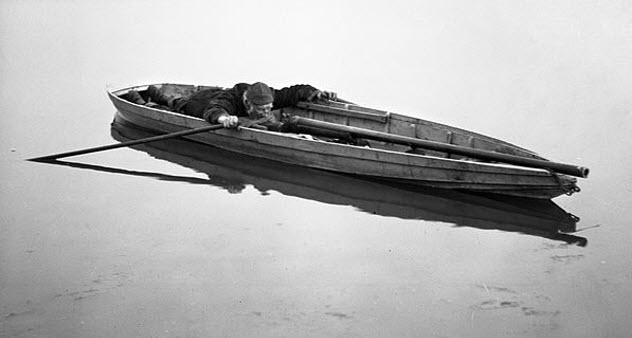 The punt gun was a large, heavy handgun made to shoot ducks. It could only be fired from a punt, a type of small boat. A single shot, which weighed as much as 0.5 kilograms (1 lb), could kill as many as 50 ducks at once. There is even a record of one shot that killed 90 birds simultaneously.

To further improve their kills, the hunters of the day formed groups of 8–10 punts that would shoot the ducks at once. This got them as many as 500 birds at a go. Eventually, the punt guns killed so many ducks that their population declined precipitously, and many states responded by banning the gun. 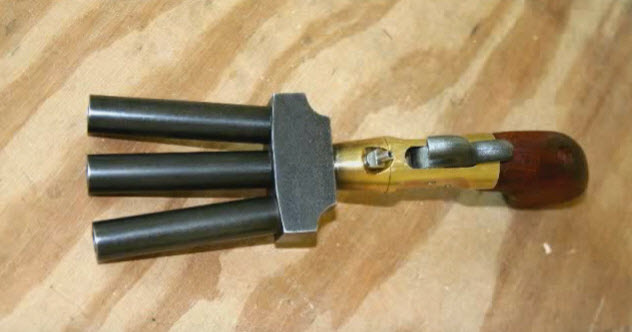 The duck foot pistol was named after the shape of its barrels, which looked like the foot of a duck. The pistol, which first appeared in the 1700s and 1800s, could have as few as three barrels and as many as six. Usually, each barrel was aimed in a different direction. One variant with three barrels had two of its barrels facing front and the last one pointing upward. Another four-barreled variant had two facing each side.

The gun was designed for use by people like bank guards, prison wardens, and ship captains who could be attacked by several people coming from different directions. Ship captains were the major customers as they needed these guns to fight against mutinous crews or attackers who wanted to hijack their ships.

The best use of the gun was in a vertical position against a single attacker, when all the shots were most likely to hit the target. However, this was still not effective in many cases because the shots usually injured—rather than killed—the attacker.

For the shooter, the only supposed advantage was that these shots would give him extra time to get a more effective weapon. But that’s a questionable benefit because the shooter could have just carried a better weapon from the start. Aside from the gun’s ineffectiveness, its bullets tended to ricochet off hard objects that were nearby, sometimes injuring the shooter. 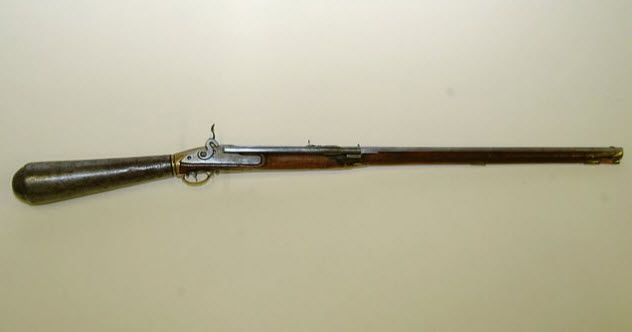 The Girandoni repeating air rifle was an 18th-century Italian rifle that used air, rather than gunpowder, to propel its bullets. Its unusually shaped stock doubled as its air reservoir. Users often went with two extra stocks and a hand pump in case the stocks ran out of air. The Girandoni was a truly innovative product and a supposed game changer during its day. It was easy to clean, had a low recoil, made little noise, and used a 20-round magazine (which was uncommon with weapons back then).

The rifle’s major flaw was its reservoirs, which often leaked and broke easily. The Austrian army, its major customer, tried bypassing this flaw by attaching the guns to bigger, more reliable, wagon-mounted reservoirs. This proved impractical, however, because such reservoirs slowed down the soldiers on the battlefield. Reloading was also a bit bizarre as the shooter needed to point the rifle toward the sky before another bullet could move into the breech in preparation for firing. 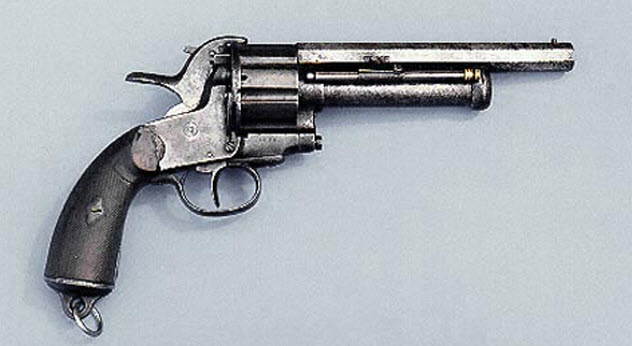 The LeMat revolver is also called the “grapeshot revolver” due to its unique ability to transform from a nine-shot revolver to a single-shot shotgun at a moment’s notice. Invented in 1856 by Dr. Jean Alexandre Francois LeMat, the LeMat revolver was later adopted for use by the Confederate Army during the US Civil War.

Unlike other revolvers, the LeMat revolver had a nine-shot cylinder for .42-caliber rounds. Underneath this barrel was a bigger barrel for a 15-gauge shotgun round. Although housed in different barrels, both rounds were fired by the same trigger. The shooter simply pulled the firing pin up for the revolver or down for the shotgun.

Even with these innovative features, however, the gun had many problems. First, its higher number of revolver rounds and the attached shotgun barrel added weight to it, which complicated aiming, firing, and reloading. In fact, reloading the gun was so problematic that it was almost impossible to do in the middle of a battle. 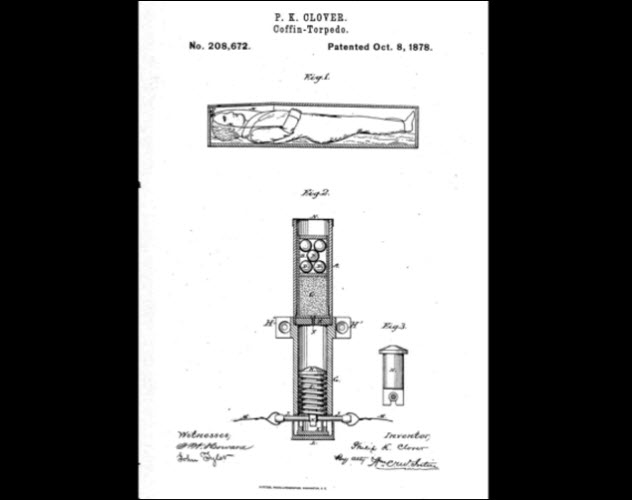 In the 18th and 19th centuries, the law forbade medical schools from buying cadavers for teaching or research purposes. The only way that surgeons and their students could get corpses was from executed criminals and from those donated by families of the deceased. This scarcity of cadavers spurred robbers to raid graves to sell corpses to medical schools.

“Cemetery guns” were created to stop corpse theft. Strategically placed inside a grave, the gun was mounted on a surface that allowed it to turn toward the robber when the unlucky thief stepped on one of the trip wires surrounding the gun.

Grave guns were soon banned, and this led to the emergence of “coffin torpedoes,” deadly land mines that exploded whenever a would-be thief opened a grave. However, even when cemetery guns were legal, they were in limited use because they were expensive to rent or own. This meant that only families of the rich could afford the guns, so the grave robbers usually stole the bodies of poor people. 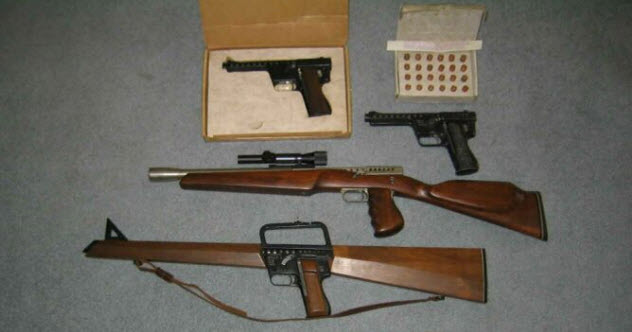 Gyrojet guns fired armor-piercing, rocket-propelled bullets. Only two variants of the gun (a pistol and a carbine) were ever made, although the inventors had planned to make more than 60 different types, including 55 mm missile interceptors. They had made several prototypes before they went out of business due to poor sales.

The gun’s unique ability to fire rocket-propelled bullets was the same reason it failed. For one thing, the bullet left the gun at a slow speed, gaining speed as it moved farther away from the gun. This made the weapon less effective at close range. For example, the pistol was incapable of killing a person at close range like normal pistols. But it wasn’t much better at longer distances because it lacked the optics necessary for accurate aim. 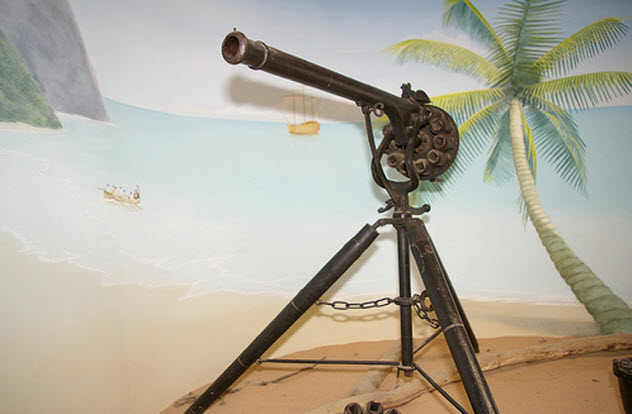 Although the Puckle gun was innovative, it was a nightmare to operate. It was too complex and inefficient, which probably made the military pass it over on several occasions. James Puckle also tried to sell it for ship defense, but that failed, too. In fact, the gun was never used in a defensive role.

The gun could fire both round and square ammunition. The round ammuniton was supposed to be fired at “civilized enemies” like enemy soldiers and criminals. The square bullets were specially made to fire at Muslim Turks—who would forcefully board ships and kill their crews—to teach them the “benefits of Christian civilization.” 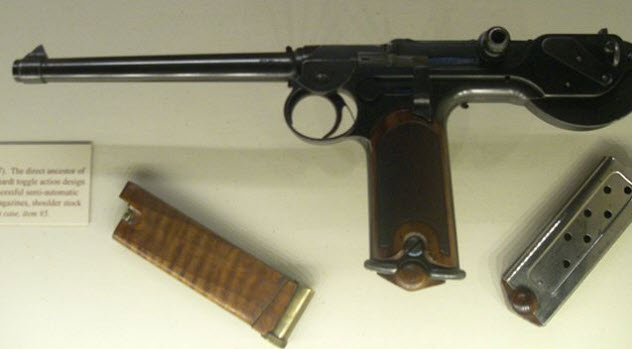 Invented by Hugo Borchardt in 1893, the Borchardt C-93 pistol was the first semiautomatic pistol to make it into large-scale production. A bizarre-looking contraption with an unusual extended grip, the gun used an eight-round magazine rather than requiring six shots to be manually loaded as with other revolvers at that time. The Borchardt C-93 pistol had a fairly high rate of fire and was even tested by the US and Swiss militaries for possible adoption.

However, this expensive gun had a poor design. Its extended grip made aiming and firing difficult and gave it uneven weight distribution. It also had a quick, high recoil.

One of the manufacturers wanted to redesign the pistol, but Borchardt turned down the offer because he believed the gun was flawless. The manufacturer later bypassed Borchardt and met with his assistant, Georg Luger, who invented the Luger pistol that was used by Germany in both world wars.

The Nazi belt buckle pistol was a belt buckle with a concealed gun. Invented by Louis Marquis for use by the Nazis during World War II, the weapon was supposed to be issued to top SS officers in case they were captured by enemy forces. The Nazi commander simply needed to open the buckle upward to reveal the barrels of the gun and then press the trigger on the right side.

The gun had dual-barreled and quad-barreled variants. Early prototypes also lacked a trigger. The wearer just needed to click on the buckle to reveal the barrel and automatically open fire on the attacker. In later variants, each of the four bullets had its own barrel and trigger.

Some believe that the buckle gun was supposed to be hidden under clothing, probably a coat, until it was needed. However, the gun is rare because only 12 were made. So it is unlikely that the Nazis ever used them. They are an expensive collector’s item today, with one gun selling for $20,700. 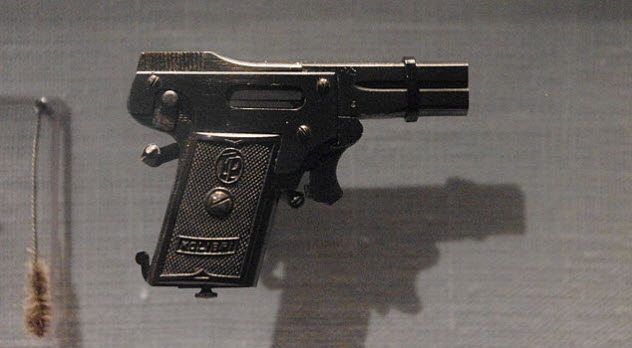 The Kolibri 2 mm pistol was the smallest pistol ever made. Invented by Franz Pfannl in 1910, it could be used for personal protection, although it had little stopping power and was probably made only to show off the capabilities of the manufacturer.

The pistol fired a custom-made 2.7 mm Kolibri round which left the gun with such a weak speed that it could be deflected with thick clothing. However, several well-aimed shots to the face from the five-round cartridge were enough to maim or even kill a thief. Less than 1,000 of the Kolibri pistols were made.

Later, Pfannl designed a slighter bigger pistol with 4 mm rounds. However, the newer weapon was not successful. With World War I just over, his company fell on hard times and closed shop.