The writings of great men like Plato and Marcus Aurelius are studied today with the same fervor and admiration they enjoyed thousands of years ago. However, we often overlook the poor folk who lived ordinary lives and dealt with ordinary problems. Etchings from some of these men have survived thousands of years and give us extraordinary glimpses into everyday life in ancient empires. 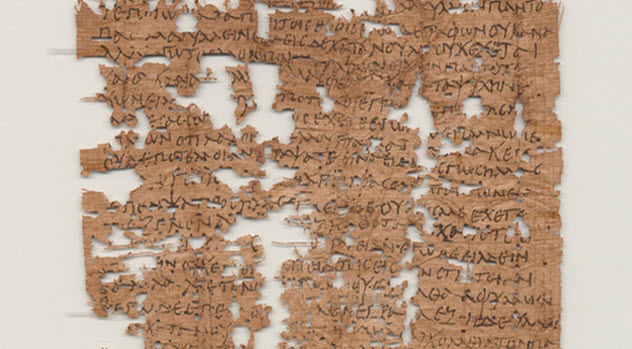 In AD 214, an Egyptian man named Aurelius Polion left his home to fight in the Roman legion. He was stationed in Pannonia Inferior near modern Hungary, which was 1,600 kilometers (1,000 mi) from home. The boy was terrified—not of dying in battle but of being forgotten by his family.

“I sent six letters to you,” Polion wrote to his family, “but you never wrote to me.”

He believed that his family had forsaken him. Still, he wanted to be with them more than anything else—so much so that he would have abandoned his post if they had written him a single word.

“The moment you have me in mind,” he promised, “I shall come to you so that you may know that I am your brother.”

9 A Babylonian Trader Struggled With A Powerful Merchant 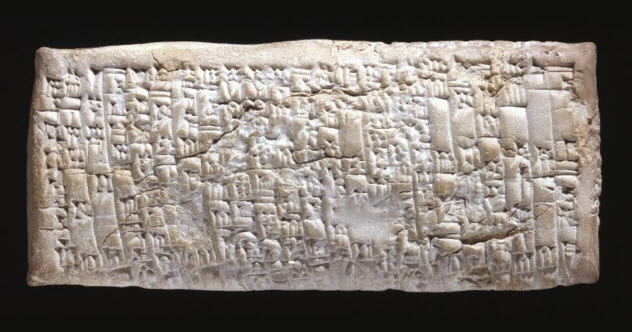 A Babylonian man named Nanni holds the unique honor of writing history’s first letter of complaint in 1750 BC. Ea-nasir, a copper merchant, had tricked Nanni into buying a low-quality product. When Nanni’s messenger complained, he was told, “If you do not want to take them, go away!” He wasn’t refunded a single coin.

Nanni was furious, but there wasn’t much he could do. According to other translated documents, Ea-nasir was powerful in the copper business and a trader probably couldn’t succeed without going through Ea-nasir.

Still, Nanni furiously chiseled these words into his tablet: “Take cognizance that from now on, I will not accept here any copper from you!” Reality must have sunk in, though, because he added a meek “that is not of fine quality.” 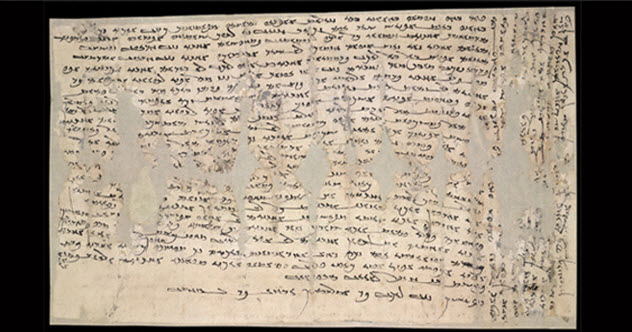 In AD 313, a Chinese woman named Miwnay was stranded in a town called Dunhuang, living in abject poverty, and desperately trying to get home to her mother.

Miwnay may have lost her husband. In a letter to her mother, she wrote that her journey home was delayed by her husband’s relative, who disapproved of her trip. The other in-laws followed suit, and every person she came to closed their doors.

“I live wretchedly,” Miwnay wrote, “without clothing, without money.” She only got by through the charity of a priest, who promised to give her a camel and take care of her on the journey.

Miwnay sent a letter home promising to be back soon. However, the letter was confiscated by a Chinese garrison and locked in a tower for 1,500 years. Miwnay’s mother never saw the anguished words her daughter wrote.

7 A Sumerian Work Crew Was Paid In Beer 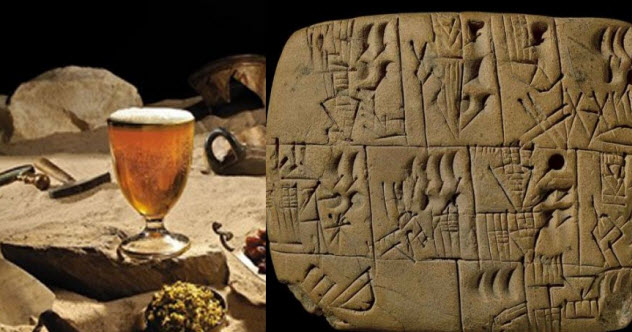 In 3000 BC, a group of Sumerian workers left their homes to work for a powerful man. This was at the dawn of civilization before the country used currency. Workers were paid in beer instead of coin.

As a receipt for their payment, a Sumerian bookkeeper tacked up a clay tablet that survives today. The tablet only says that the men were given beer for work—but it’s a fascinating look into what life was like before money.

Most men could provide shelter and food for their families by the toil of their hands, but they didn’t have the resources to make wine. So early men left their families to work for someone more powerful—and get drunk.

6 An Angry Roman Drew Jesus As A Crucified Donkey 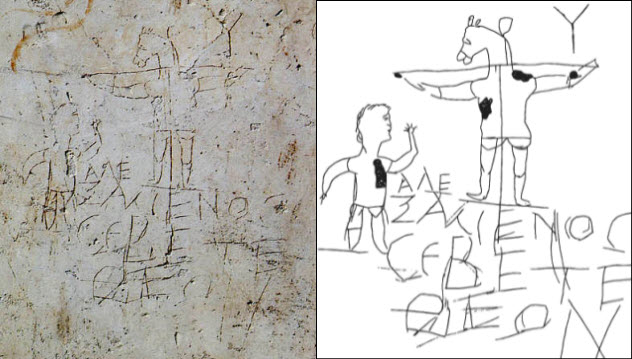 In AD 200, a Roman named Alexamenos was a member of the Christian faith and his community didn’t care for it. One man, who must have hated Alexamenos, etched a crude drawing of a man worshiping a donkey-headed man on a cross. Scribbled underneath were the words: “Alexamenos worships his God.”

It was a hateful act, but it wasn’t unique. In the early days of Christianity, many Romans believed that Christians were cannibals. Even Marcus Aurelius’s tutor went on record saying that Christians held rituals “initiated by the slaughter and the blood of an infant.”

Jesus was often called the “Donkey Priest” as an insult. A few people even seem to have believed that Jesus literally had the head of a donkey. So when Alexamenos saw the crude drawing on the wall, the message was clear. He was not trusted—and he was not wanted.

5 An Egyptian Worker Refused to Take A Sick Day 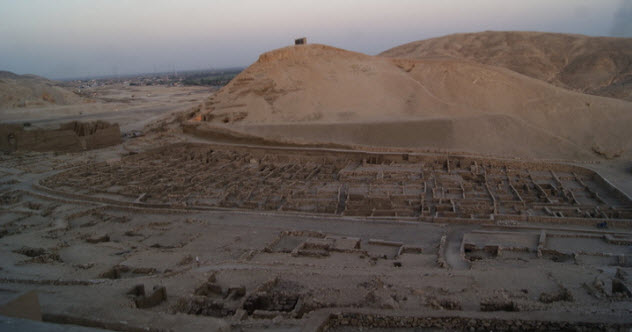 In 1500 BC, Egyptian workers lived in a town called Deir el-Medina near the Valley of the Kings. These men would make the trek to the tombs of the pharaohs to work, leaving their families for a week at a time.

Papyrus scrolls show that the workers were given paid leave when sick and a physician would be dispatched to their homes to take care of them.

A reprimanding record tells us that one worker named Merysekhmet drudged through his work while ill, refusing to take time off. For two days, he worked despite the pain—until he couldn’t do it anymore.

Merysekhmet was forced to take a few days off to recover. But as soon as he was able, he headed back to work on a project that would outlive even the kings for whom he built it.

4 The People Of Pompeii Loved To Party 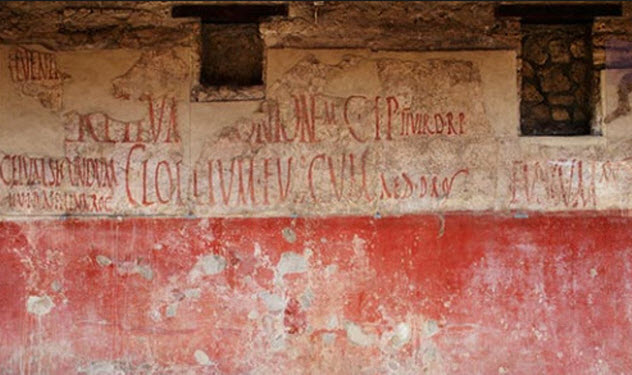 Before Pompeii was buried in a volcanic eruption, the city was a party town filled with obscene art and brothels—and graffiti.

Messages like “I screwed the barmaid” showed up on tavern walls. “Celadus the Thracian makes the girls moan!” was scribbled in a gladiator’s barracks. The most memorable of all was on the walls of a brothel. “Weep, you girls!” it said. “My penis has given you up! Now it penetrates men’s behinds.”

The people of Pompeii drank and enjoyed themselves, but they loved, too. One proud man wrote on the walls of a home: “If anyone does not believe in Venus, they should gaze at my girlfriend.” A woman wrote that she wouldn’t sell her husband “for all the gold in the world.”

But in a city frozen in time, it’s the simplest message that seems the most meaningful. “Gaius and Aulus,” it reads. “Friends forever.”

3 A Greek Tourist In Egypt Missed His Mother 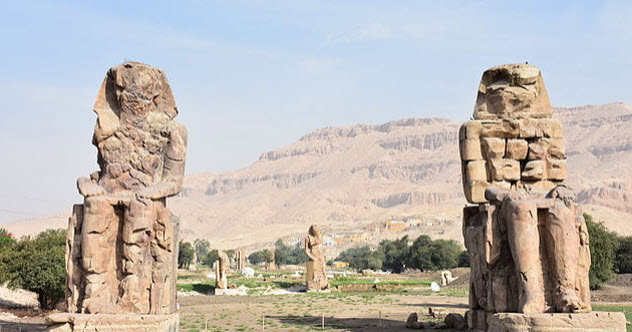 Around 278 BC, tourists from Greece and Italy started flocking to the Valley of the Kings in Egypt to see the tombs. They also left graffiti that shows an incredible reverence for the site.

Some etched their names or their jobs on the sides of walls while others wrote of their amazement for the place where they stood. However, one unique piece of graffiti at the Colossi of Memnon stands out.

The Colossi had been damaged in earthquakes, and air seeping through the cracks tended to make a high whistling sound. When one Greek tourist heard the whistle, he believed that Memnon had cried out the name of his mother.

He wrote what he’d heard on the foot. Then he added a message to someone else. “I missed you, O my mother,” he wrote, “and I prayed that you might hear him, too.”

2 The Men Who Built The Pyramids Left Their Marks 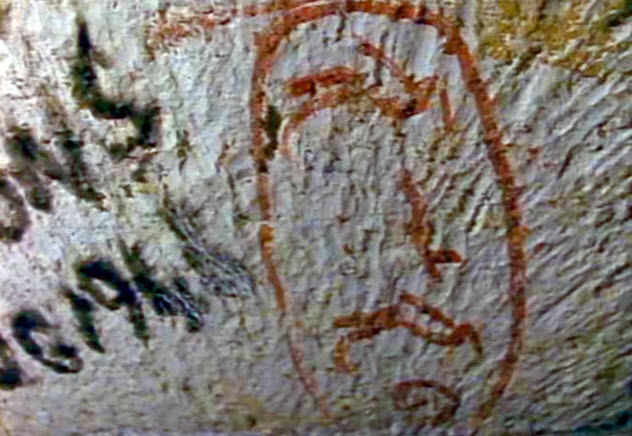 Some young men in Egyptian villages had never seen more than a few hundred people in their whole lives—until someone came and ordered them to work on the “royal labor project” as a form of taxation.

They were sent on great journeys across the country, leaving their homes for the first time. Then they saw what they were going to build—the pyramids, a wonder of the world towering above the horizon.

It must have changed everything these men understood about what was possible in this world. While they worked, they lived in lean-tos, ate at a local bakery, and sometimes died on the pyramid walls and were buried nearby.

Even so, each crew left their tag on the walls they’d worked on, making sure that their part in building something that would be remembered for millennia would not be forgotten. 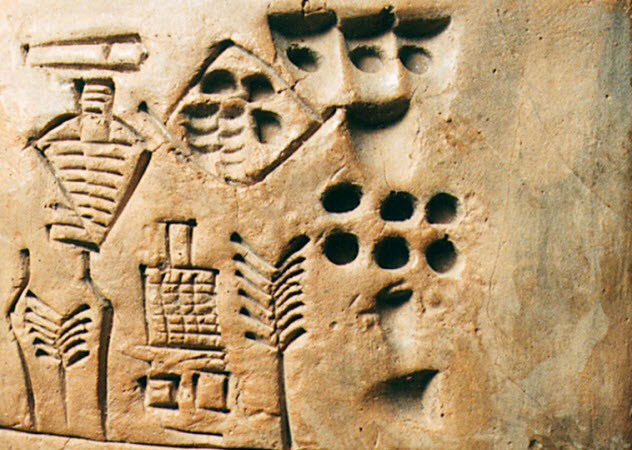 The oldest names written in history are the names of common people doing nothing more than working through the daily drudge of their jobs.

The first written name we have is an accountant from 3100 BC. The tablet reads, “29,086 measures of barley [over the course of] 37 months” and is signed “Kushim.” The first tablet with more than one name is an ad from a slave trader that reads, “Two slaves held by Gal-Sal: En-pap X and Sukkalgir.”

These writings were likely mundane moments in the lives of these men. They were repeating things they did every day at work. Kushim was counting barley, Gal-Sal was selling slaves, and En-pap X and Sukkalgir were dreading a new life of servitude. 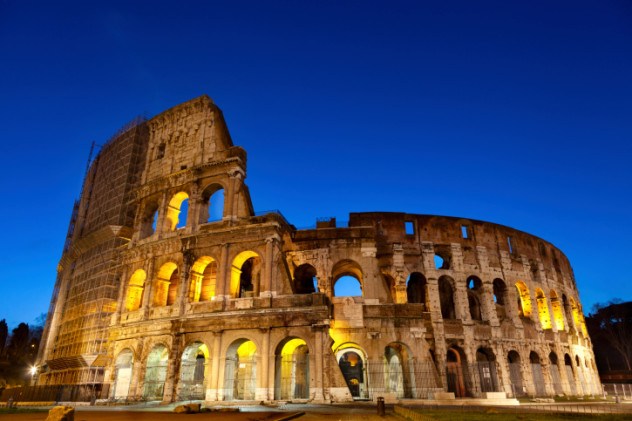 It is always surprising to see how much the ancient’s lives had in common with our own (minus free and easy debt of course). Here are some other lists of a similar nature from the Listverse archives: