Alcohol often gets a bad rap. Check the number of accidents caused by drunk drivers or the people in prison for offenses they committed after they got too drunk.

However, alcohol also has its good qualities. By that, we mean that it has saved the lives of several people and animals. Most of the time, these people were administered some shots of vodka or whiskey or some cans of beer to cure their medical ailments. In one instance, some guys were saved by the cork of a vodka bottle. 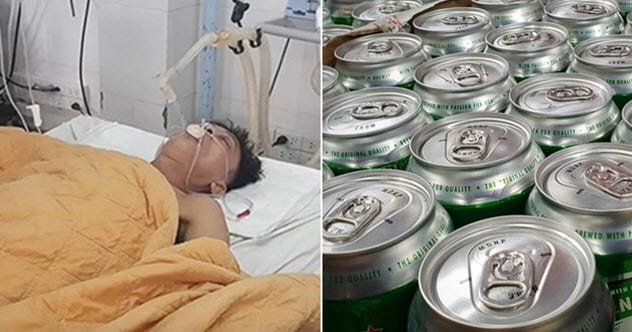 Trouble started for Nhat after he consumed a drink containing methanol, a poisonous form of alcohol. The alcohols we often consume are made with ethanol. Nhat was admitted to intensive care where doctors passed 15 cans of beer into his body.

Doctors first administered three cans of beer to Nhat. Thereafter, they administered one can of beer every hour to rid his body of the poisonous methanol. This worked because the liver prioritizes the breakdown of ethanol over methanol. While the liver concentrated on the ethanol, doctors performed dialysis to rid Nhat’s body of the methanol.

Doctors would have used vodka in place of beer because vodka has a higher ethanol content. However, they used beer because no vodka was available. Nhat was discharged after the procedure.[1] 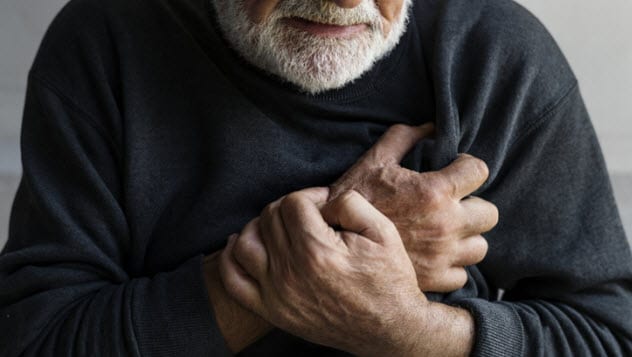 In 2012, 77-year-old Ronald Aldom was admitted to intensive care after suffering from ventricular tachycardia (VT). VT is caused by irregular heart rhythms and is often the result of an earlier heart attack.

Doctors attempted regular treatment, but it did not work. As a last option, they used what they call “ethanol ablation.” This means that they passed alcohol into Aldom’s heart to cause a controlled heart attack.

Doctors inserted a catheter into Aldom’s groin and directed it to an artery in the affected part of his heart. Then they passed a small amount of alcohol through the catheter. The alcohol caused the muscles in that area of the heart to stop working, which resulted in the heart rate returning to normal. 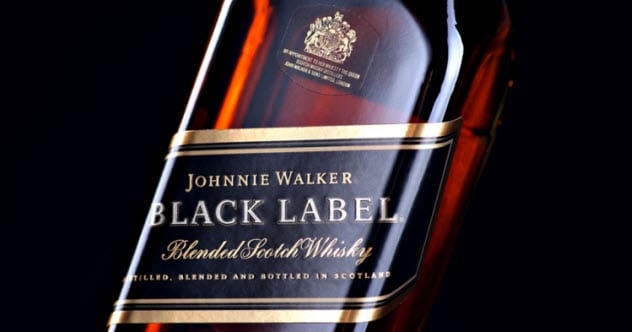 In June 2012, 65-year-old Denis Duthie was saved by whiskey after he temporarily went blind. Trouble began for the diabetic man after he drank some vodka that interfered with his diabetes medication. It caused him to go blind as he walked into his bedroom.

Duthie did not quickly realize he had gone blind. He thought the lights just went off. He only realized what had happened when he couldn’t find the light switch. He went to bed, hoping his sight would be restored the next day. He was wrong.

Duthie was taken into surgery after he arrived at the hospital. Doctors suspected that he was suffering from formaldehyde poisoning, which could be caused by drinking methanol. Interestingly, this could be treated with ethanol, which is in whiskey.

The doctors did not have enough ethanol in the hospital, so somebody went to get a bottle of Johnnie Walker Black Label whiskey from a nearby store. Doctors poured the whiskey into a drip and passed it directly into Duthie’s stomach.[3]

He remained in a coma for five days. Interestingly, he never got drunk because doctors passed the whiskey directly into his stomach. He would have become drunk if the alcohol had been administered through his mouth. 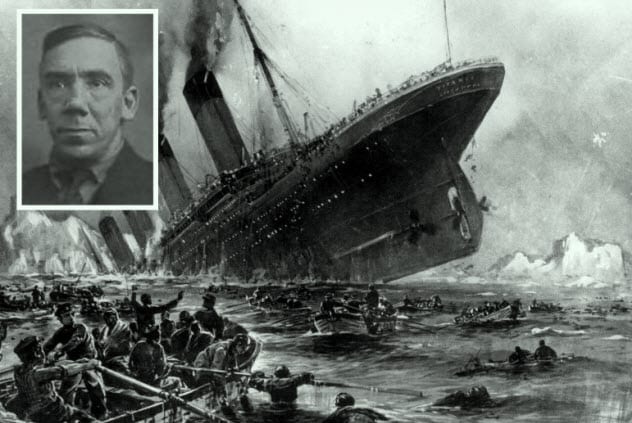 Charles Joughin was the head baker on the Titanic when it sank in the early morning of April 15, 1912. Joughin behaved eccentrically after the ship hit the iceberg and until it sank. He first had his staff deliver 50 loaves of bread to people boarding the lifeboats. Then he went into his room to have a drink.

Later, he left for the lifeboats—and actually got one—but abandoned his seat to allow more women and children aboard. He returned to his room to have another drink. The Titanic started to sink as he finished his drink.

Joughin threw chairs into the water so survivors could have something to hold onto. Then he went into the pantry to get more drinks. It was then that the Titanic broke into two. Joughin was right on the stern of the ship as it went underwater. He remained in the cold water for two and a half hours until he was rescued by a lifeboat.

Ultimately, Joughin merely suffered swollen feet, which is admirable considering that lots of people froze to death in the cold ocean. An inquiry determined that Joughin had survived the cold waters because he was drunk. He had so much alcohol in his system that he didn’t freeze.[4]

Interestingly, a drunk person normally freezes to death faster than a sober person. However, Joughin was too drunk and the water was so cold that his blood vessels just tightened. He would have frozen to death if he had not been drunk enough. 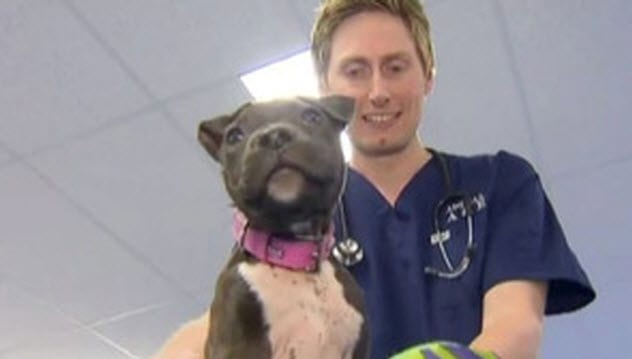 A few years ago, Stacy Zammit entered her Melbourne, Australia, home to find Cloe, her American Staffordshire Terrier, behaving abnormally. Cloe fell whenever she attempted to stand. By night, she had lost her appetite and started crying.

Zammit took Cloe to a veterinarian who determined that the puppy had ingested antifreeze. Zammit and the vet suspected that Cloe had licked the chemical from some parked cars. Antifreeze is dangerous to humans and animals because it contains ethylene glycol, a poisonous chemical compound that causes kidney failure and death.

The vet considered administering some alcohol to Cloe. Unfortunately, there was none in the clinic. Luckily for Cloe, he had a bottle of vodka that had been gifted to him by a member of his staff. The vet poured the vodka in a drip and administered it to Cloe.

Over one-third of the bottle was passed into Cloe’s body over the next two days. That amount is equivalent to a human drinking eight shots of vodka at four-hour intervals. Cloe made a full recovery.[5] 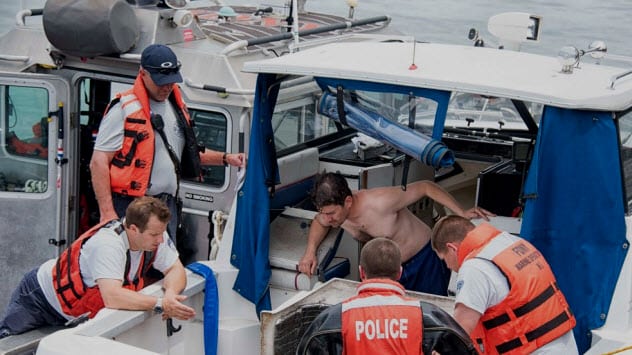 In May 2016, Joseph Lehr, Michael Clapman, and an unnamed friend were sailing 183 meters (600 ft) off the coast of Rockaway Beach in New York when their boat lost a drain plug. Water started entering the boat through the hole.

The trio unsuccessfully tried covering the holes with several items including metal and socks. About 1 meter (3 ft) of water had already entered the boat by the time they got close to shore. For a while, it seemed like they were going to sink.

A man having a party saved the day when he threw some corks at them. Lehr grabbed one, which was from an Absolut vodka bottle, and used it to cover the leak. Lehr and his friends were escorted to safety by the New York City Fire Department and the New York Police Department.[6] 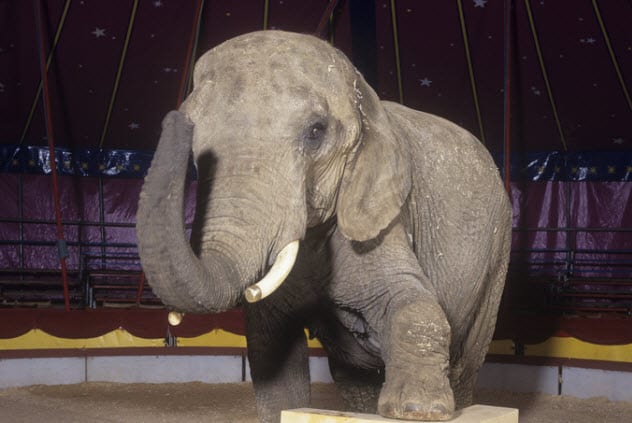 In 2012, two circus elephants were saved from freezing to death after circus officials gave them some shots of vodka. The show was traveling through the cold Novosibirsk region of Siberia, Russia, when the trailer carrying the elephants caught on fire.

The elephants were released from the trailer into the cold where temperatures reached -40 degrees Celsius (-40 °F). Their ears soon got frostbitten, and it looked like they were going to die of hypothermia. Luckily, the staff saved their lives when they administered some shots of vodka.

The elephants loved the drink so much that they trumpeted in appreciation. (The sort of thing that drunk humans do.) Then the animals were led to a garage where they remained until another trailer arrived. Rostislav Shilo, the director of Novosibirsk Zoo, later clarified that the elephants never got drunk. Circus officials had diluted the vodka with water.[7] 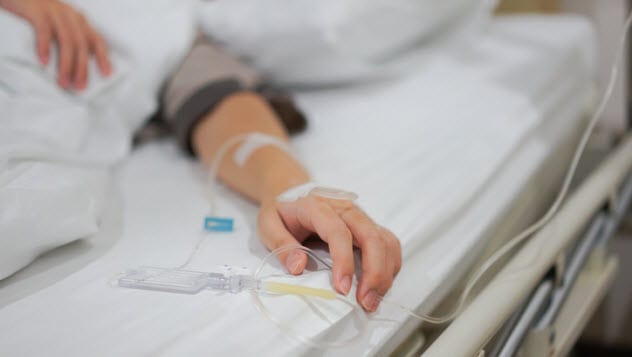 In 2007, doctors in Australia saved the life of a suicidal Italian tourist with some shots of vodka. The unnamed 24-year-old had drunk antifreeze in a failed suicide attempt. He was rushed to intensive care where staff administered a drip filled with medicinal alcohol to counter the effects of the deadly poison.

They later turned to regular alcohol after their supplies ran out. The alcohol of choice here was vodka. For three days, doctors filled the tourist’s drip with three shots of vodka every hour. Fortunately, they put him in a deliberate coma so he would not feel the effects of getting stoned. He survived and left the hospital 20 days later.[8] 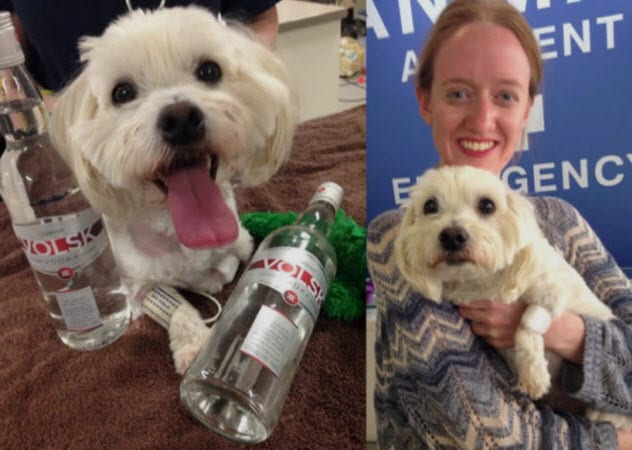 Charlie was another dog that almost died of kidney failure after licking ethylene glycol. The Maltese terrier licked the chemical compound on the floor of the garage in the home of its owner in Melbourne, Australia.

Charlie was transported to Melbourne Animal Accident and Emergency hospital where vets passed a drip of vodka into his stomach through his nose.

The vodka worked because the enzymes that convert ethylene glycol into the deadly glycolic and oxalic acids prefer attaching to alcohol rather than ethylene glycol. Vodka is often the drink of choice because it is almost pure alcohol.

Over the next two days, veterinarians gave the vodka to Charlie while they extracted the ethylene glycol. Charlie made a full recovery, although he was still experiencing a hangover at the time he was discharged.[9] 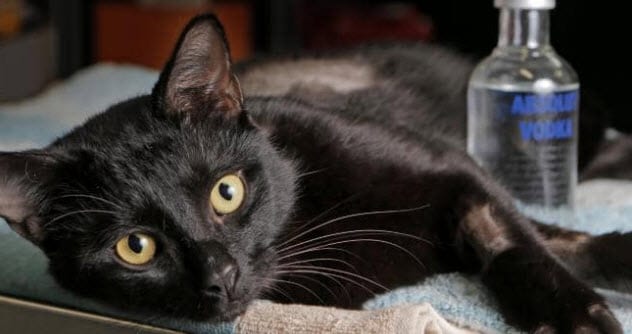 The cat was named Tipsy after some shots of alcohol saved his life. The dying cat was found outside a shop in Lowood, Queensland, Australia. He was taken to a Royal Society for the Prevention of Cruelty to Animals hospital where he was discovered to have ingested antifreeze.

Tipsy was almost dead when he arrived at the hospital. He was weak, and his kidneys were almost failing. The vets feared that he would not survive for another hour. They wanted to administer alcohol, but there was none in the hospital.[10]

Luckily, one of the nurses had an unopened bottle of vodka that someone had given her as a Christmas gift. Doctors diluted the vodka and administered it to the cat through a drip. The cat remained on the drip for 10 hours. Tipsy went on to make a full recovery, although he did have a hangover.