Most people have probably had some sort of an experience with a good luck charm, whether it was a penny, rabbit’s foot, four leaf clover, or some other object. Obviously, there is no scientific evidence for these items working. So if you still have bad luck, don’t blame us. 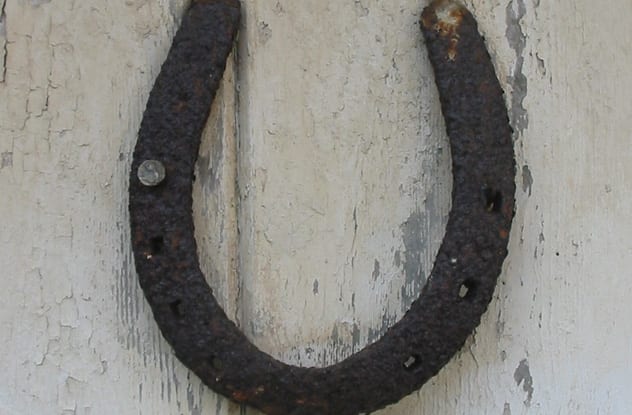 The first horseshoes ever found are from the Etruscans in 400 BC. When the superstition was first introduced in northern Europe, most likely by wandering Celtic tribes, horseshoes were hung from above the doorway in an effort to ward off evil fairy folk who wandered the forests. They were also made of iron, which was considered lucky as well. (The fairy folk were also said to be afraid of the weapons of their enemies, which just happened to be made of iron.)

The shoes were said to resemble the Celtic moon god’s crescent symbol. Depending on the source, horseshoes hung with the two ends pointed up collect the luck like a bowl, while horseshoes hung with the two ends pointed down spill out their luck on those who walk underneath it. Another traditional aspect said to provide luck was that they were usually held up by seven iron nails—which, as we’ll see later on, is often seen as an important number. 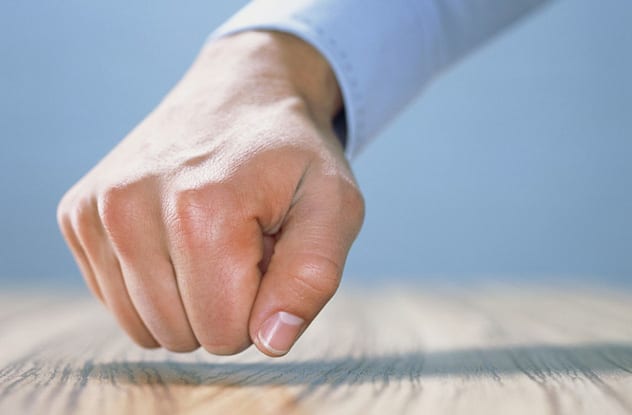 The act of knocking on wood does not have a clear origin. Most likely because ancient pagans used to have a lot of spirits who called the forests home, knocking on wood can be seen as a ward against evil or a plea from a deity for favor. It might also have something to do with ancient pagans making a lot of noise when chasing away evil spirits or trying to prevent them from hearing about (and then ruining) someone’s good luck.

Knocking came about before the 19th century but really caught on because many games played by children involved the action. By the 20th century, the superstition had become as widespread as it is today. 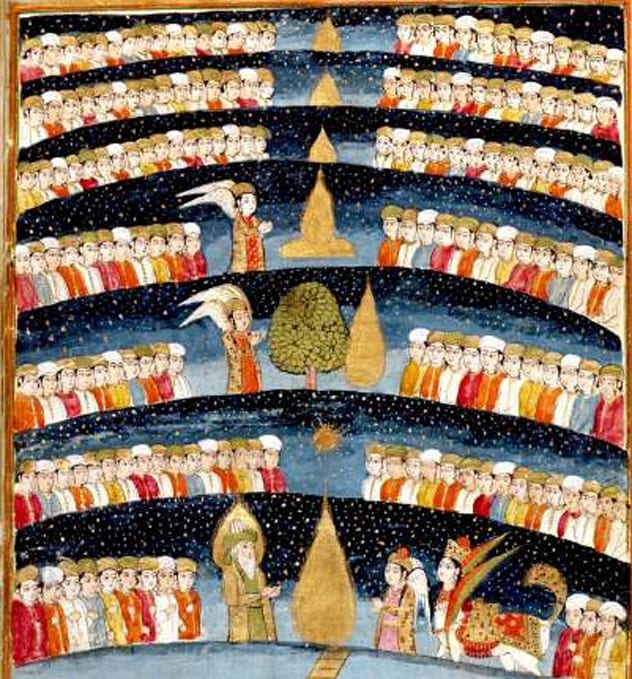 There are many numbers that are considered lucky, but the highest of them all is 7. Considered lucky because of its connection to nearly every religion, 7 is especially precious to Jews (where the practice most likely originated) and Christians because it is seen as a divine number of sorts. There are seven different levels of heaven, and there were seven days in God’s first week.

The number also features prominently in several myths around the world. In ancient Egypt, there were seven paths to heaven. However, in China, 7 is considered unlucky, as it is associated with death, and they prefer the number 8, as it rhymes with the word for prosperity or wealth. 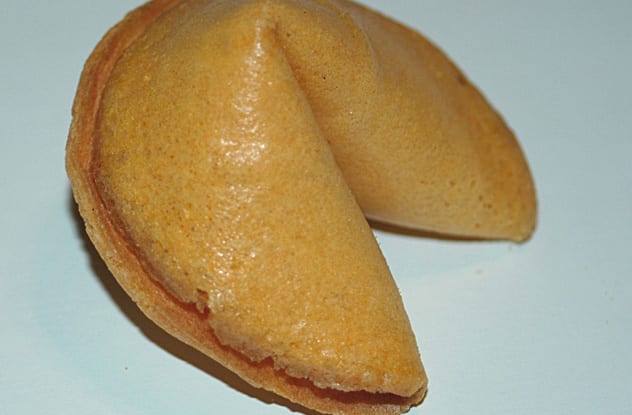 Many people believe that fortune cookies are of Chinese origin, as they are extremely common in Chinese restaurants around the world. They are also said to bring good luck in the form of paper fortunes hidden inside the cookie. However, that is not the case. They were invented in 1914 by a Japanese man named Makoto Hagiwara in San Francisco. (Some erroneously believe it was a Chinese-American by the name of David Jung, but Hagiwara’s were created first.)

The cookies themselves are most likely derived from Japanese fortune crackers, known as tsujiura senbei. These rice cakes with paper fortunes stuffed inside were made at a Japanese shrine in the 19th century. As for the jump to Chinese restaurants, many Japanese immigrants living in California in the early 20th century owned places that served Americanized Chinese food, as their traditional fare didn’t seem to go over well. 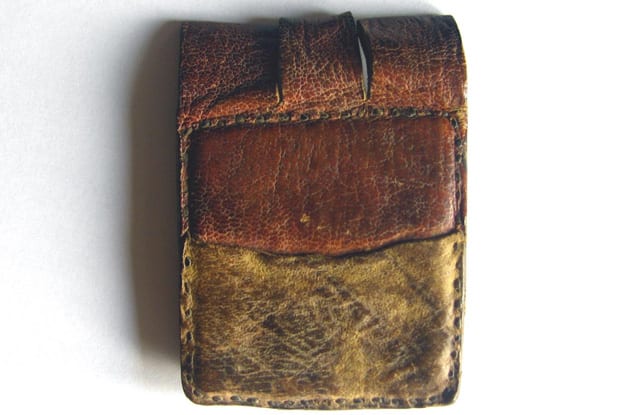 A staple of the West African Vodun religion, as well as traditional voodoo beliefs in the Americas, the gris-gris (pronounced “gree-gree”) is a lucky bag with several interesting benefits. Men traditionally wear them around their neck, whereas women either pin them to their bra or inside their blouse. Mostly used as a good luck charm, it can also ward off evil. In the case of some West African countries, it is seen as an effective form of birth control.

Its first use was by the people of Mali, who inscribed Islamic verses on it either just before or just after they came in contact with Muslim missionaries beginning to spread their new religion. Depending on what is placed inside the pouch, the gris-gris can also be used as a form of black magic. Common ingredients in a gris-gris are herbs with purported magical qualities and dead animal parts. 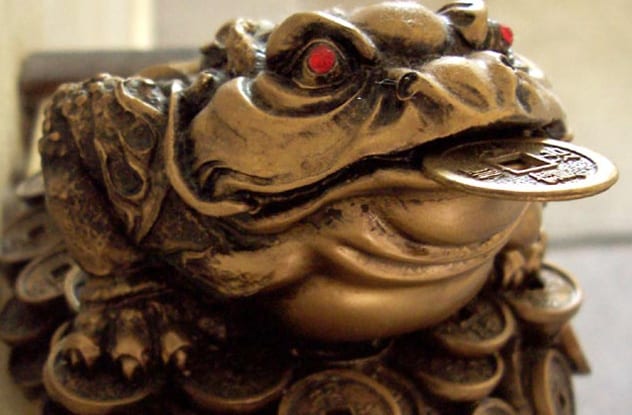 Known as the “money toad,” the Jin Chan, or Ch’an Chu, is a red-eyed, three-legged bullfrog, usually sitting on a sloppy pile of coins. Originating in China thousands of years ago, the Jin Chan is a common charm in Chinese culture, especially in relation to Feng Shui, though its use as a wealth charm developed much more recently, possibly as late as the 16th or 17th century. However, it may be related to an ancient myth about a moon toad who became the essence of the Moon.

It is said to bring good luck, mostly in the form of monetary gains, and its statues are often depicted with coins in their mouths. (If the frog doesn’t have one, it needs to be pointed away from the house or it will suck the money out of the house.) It’s also often seen in the company of the Daoist figure Liu Hai, who later became the God of Wealth. 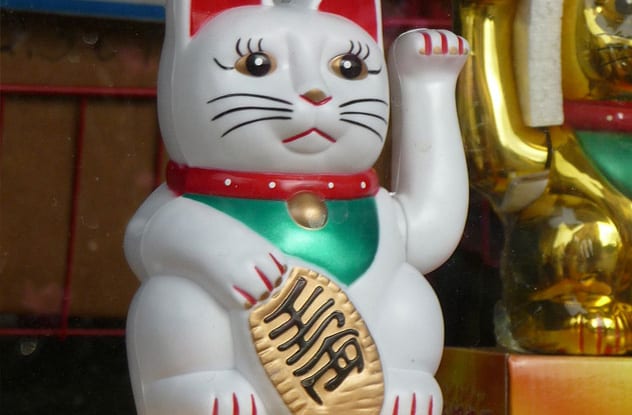 Literally translated as “the beckoning cat,” a maneki-neko is a Japanese good luck charm in the form of a cat with its paw raised. Originating in Japan sometime between the 16th and 18th centuries, a maneki-neko is usually placed in shop windows or storefronts because it is said to bring business and prosperity. Many of them are also depicted with coins in their paws.

The classic mythical origin of the maneki-neko is that a downtrodden businessman happened upon a starving cat. Even though he had no money, he nursed it back to health, and his business picked up shortly after because the cat would sit in front of his store and wave at passers-by. Various superstitions arise when describing the elements. For example, when the left paw is raised, it usually means fortune is the purpose, and when the right paw is raised, it means health is what the owner is after. 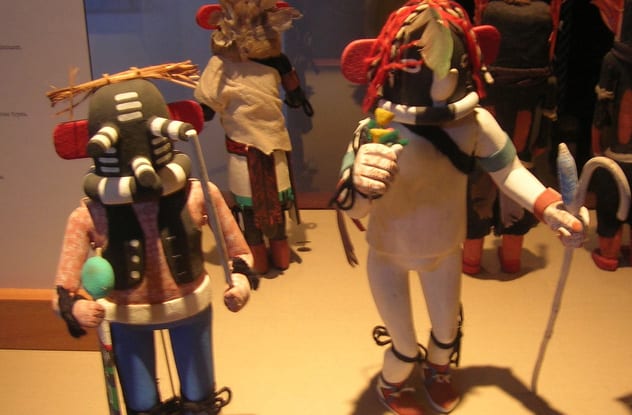 Used by the Hopi people of North America, kachina dolls have been around since the late 18th century. They represent any one of the hundreds of spirits that are said to interact with the tribe. Traditionally carved from the roots of cottonwood trees, they are often decorated based on their purpose with necklaces, bracelets or even knives.

Starting when they are one, Hopi girls are given two dolls each year. In addition to being an educational tool for young girls to learn about their culture, kachina dolls are also said to bring good luck to those families which make them, protecting them from evil and disaster. 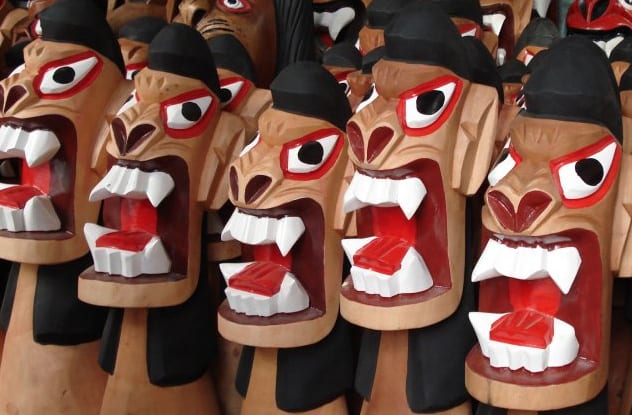 A Portuguese word meaning “scowl”, a carranca is a statue, normally carved out of wood, which is placed at the front of a boat. Its primary function is to protect the boat from evil spirits that would try to enter it or capsize it. Some legends say they were also able to emit a low groan, warning the crew of approaching danger.

Coming from the Rio Sao Francisco in Brazil, carrancas were first used in the latter half of the 18th century. Though not used much today, other than to sell for tourists, they were commonly depicted with frightening faces, which were said to scare the creatures of the river. 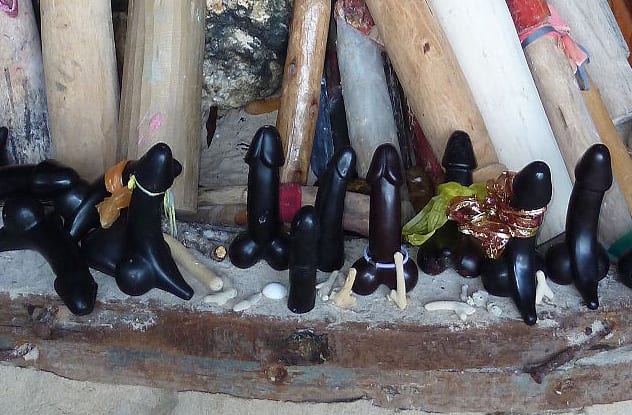 The strangest one on this list, a palad khik is a Thai amulet used for good luck. Since it translates as “honorable surrogate penis,” it should be obvious what it’s shaped like. Originally created by the Indian people, it was imported to Thailand in the eighth century by monks and took on its current use. In fact, the earliest examples often feature praises to Shiva.

A palad khik is said to grant virtually any benefit desired, but it is mainly used to keep harm from befalling one’s actual genitals. They range in size, and some can even reach a length of a few feet. 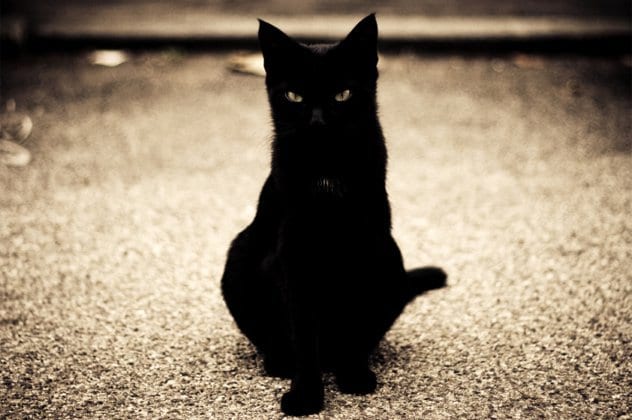 If you want some more luck in your day, get started by reading these lists from the archives: