Plants look so pretty and gentle. Compared to skittering animals, they seem to barely move at all. All of their actions are so slow that it is hard to imagine them as nefarious murderers. But nature is red in tooth and claw, and it turns out in thorn and leaf, too. Here are 10 ingenious ways that plants hunt and kill their opponents.

The ultra-fast trap of an aquatic carnivorous plant

Stagnant water can be poor in nutrients. To make up for this relative poverty, the bladderwort has evolved a method of catching water fleas to eat.

Small leaves are modified into hollow balls with a door at one end. Water is pumped out from the interior of the bladders so that there is a pressure difference. Beside the door are pressure-sensitive hairs.

Now the plant plays a waiting game, something plants tend to be very good at. As soon as a water flea touches one of the sensitive hairs, the door to the bladder opens.

In less than a millisecond, the bladder sucks in water—and the unfortunate water flea. There, digestive enzymes dissolve the still-living flea. Once digestion is complete, the trap is reset to await its next guest.

In jungles and forests, space is at a premium. It is not enough to get some space on the ground. Plants live off the Sun and so must compete for space in the canopy. Some plants have evolved to live on other trees to get themselves up in the canopy.

Strangler figs are not content with merely being guests. When a seed of a strangler fig is deposited by a bird on the branch of a tree, the seedling that sprouts sends roots trailing all the way to the earth.

Once it has access to the soil, the strangler fig can grow rapidly. It sends roots down the outside of the host tree, locking it tightly. Now the fig sends up branches and leaves to cut off its host from the Sun. Throttled, the host dies, but the fig has gained a prime location.

Pitcher plants have evolved to deal with their nutrient-poor environments in a way that is a threat not just to insects but also to small mammals and reptiles. Pitcher plants drown their prey.

Highly modified leaves create pitchers which catch rainwater. This water is then impregnated with chemicals that help to dissolve anything which falls into it. The interior side of the pitchers is too slick for anything to get a grip on.

Once inside, the animal finds no way to get out. It drowns, dies, and is digested for the benefit of the plant. The presence of a dead animal inside may draw more animals to investigate—where they may tumble in to repeat the cycle.

Venus flytraps are probably the best known of all carnivorous plants. Many children are given them as entertainingly horrifying gifts. In the wild, the Venus flytrap is considered to be threatened and it grows only in the wetlands of North and South Carolina.

In their wetland home, the ground is poor in nutrients. So they have evolved a highly complex trapping mechanism for insects and spiders. The end of their leaves is modified into a pair of jaws fringed with spikes. On the inside of the trap are sensitive hairs.

When an insect crawls over the trap, it triggers the hairs. To avoid accidental closing, the trap is only sprung when two different hairs are touched within 20 seconds. Once the trap is set off, it closes around its prey.

The insect continues to struggle, triggering more hairs and keeping the trap shut. The trap seals around the prey and digests it, opening to reveal the indigestible husk of the insect.

Sundews take a more relaxed approach to trapping insects for nutrients. The sundews have developed mucilaginous glands all over their leaves. These stalks produce blobs of sticky mucus. The mucus tends to be loaded with sugars that lure the insects to them.

But from the moment the insect lands, it is lost. Struggling to be released from one tentacle, the insect will connect with others, trapping itself more thoroughly.

If that were not enough, the tentacles themselves are also mobile. They move toward the insect until it is entirely covered. In some species, the entire leaf curls around the trapped prey to ensure it cannot escape. The sweet mucus which first got the insect to land also contains the enzymes which will digest it. 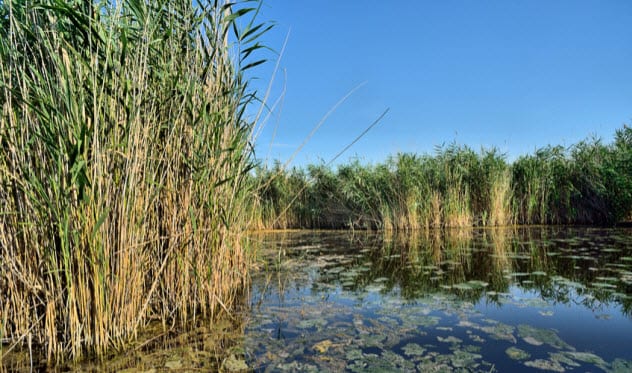 In the US, one of the most invasive species of wetland plant is the common reed, Phragmites australis. Thousands of acres of wetland have come to be dominated by the intruder.

Many plants are known to release toxic chemicals to discourage neighboring plants from getting too close. This chemical warfare between plants is known as allelopathy.

The common reed is more aggressive. Its roots release an acid so strong that it dissolves the root systems of anything growing beside it. With their roots disintegrating, the other plants topple and rot. This gives the reed room to spread and new opportunities to go to war with new neighbors. 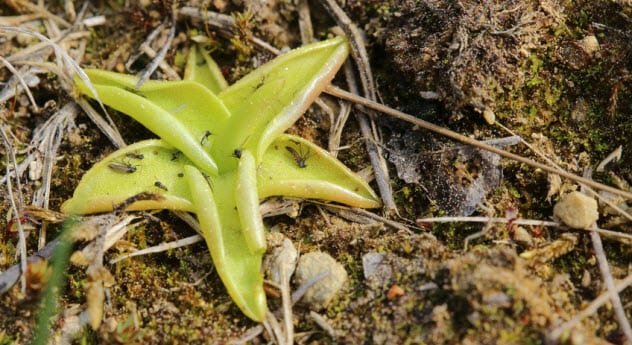 Butterworts are the lazy members of the carnivorous plant world. Unlike the sundews, the butterworts do not go in for all that quick movement involved in catching insects. They simply set out their leaves and wait for insects to come to them.

Their flat leaves exude a sticky mucus which passing insects may mistake for water or nectar. Once the insect is trapped on the leaf’s surface, the movement of the insect causes the leaf to curl slowly around it to completely cover the insect in digestive mucus.

Once the insect is dissolved, the nutrient-rich slurry is absorbed through the leaf. The leaves used as traps require regular replacement, so the plant is able to produce them in great numbers to maximize its ability to catch its dinner. 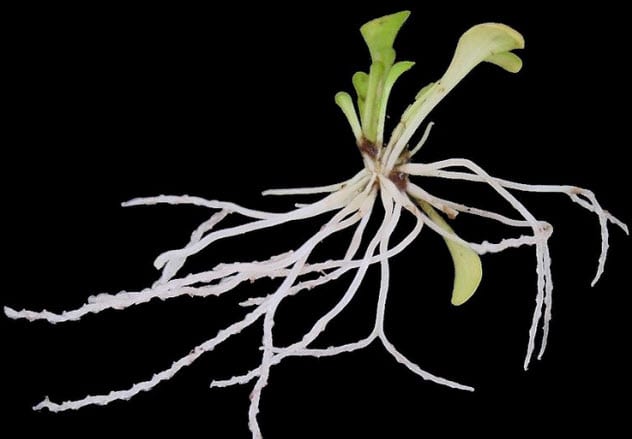 Strictly speaking, the tropical plant Genlisea does not have roots. If you dig up one of these little plants, you will see long white things that look like roots. But they are actually traps made from modified leaves.

To get the nutrients that roots would usually supply, these traps act like lobster pots. Creatures can enter but are unable to exit. Y-shaped traps with openings just 400 micrometers (0.02 in) wide are ringed with miniscule hairs pointing inward.

Any movement by an organism that gets inside will tend to move it closer to the part of the trap that digests those trapped inside. The prey of Genlisea are protists, tiny organisms (mostly single-celled) that move through the soil. 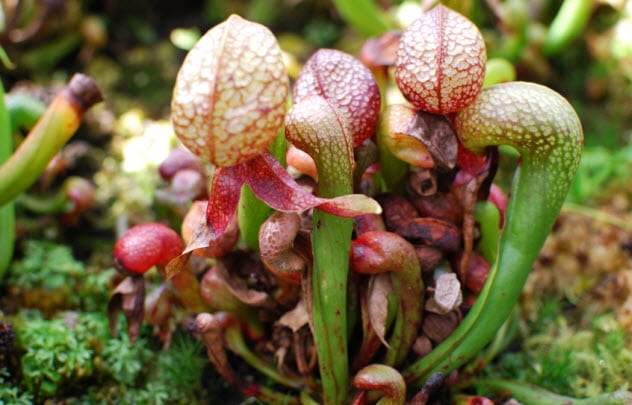 Instead of catching rainwater to fill its pitcher, this plant regulates the level inside by pumping in water. This is necessary because the pitcher plant has a curved entrance to the pitcher. This allows things to crawl in. But once its prey is inside, the plant hides the exit from view.

Not content with simply hiding the exit, the body of the pitcher has translucent areas—false exits. Insects trapped inside will cluster around these seemingly obvious escapes, never looking for the real one. Tired by their efforts, they slip deeper into the pitcher to be digested. 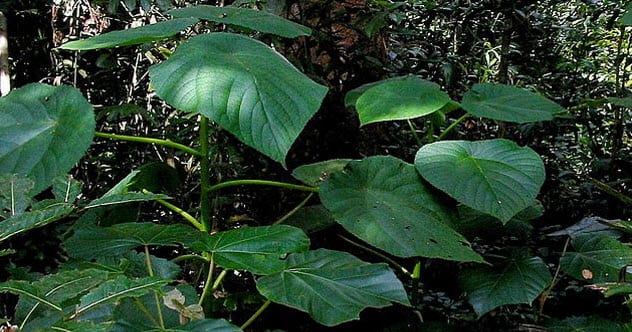 Not all plants are actively seeking to kill. Some use stinging sensations to drive away those herbivores that might seek to eat the plants. Usually, this pain is mild, but animals learn their lesson.

However, one plant has produced such a painful protection that it has driven humans to suicide. The gympie gympie, native to Australia and Indonesia, has heart-shaped leaves bristling with poison-filled needles. Simply brushing a leaf will drive the needles into the skin and release a neurotoxin into the body.

The pain can kill dogs, horses, and drive men mad. One forester who accidentally used a leaf of the gympie gympie for toilet paper is said to have shot himself. The pain can persist for years, and ordinary painkillers do almost nothing to dull the agony.