There was a time when the words “nuclear” and “radiation” weren’t scary. People believed radiation could fix every problem. They weren’t exactly clear on how it worked, but they were pretty sure that holding on to radium as tightly as you could was a surefire way to cure every disease. We used to be able to buy radioactive versions of everything, and we used them in ways that weren’t just dangerous—but downright insane.

10 Drive Safe With A Nuclear Reactor In Your Trunk 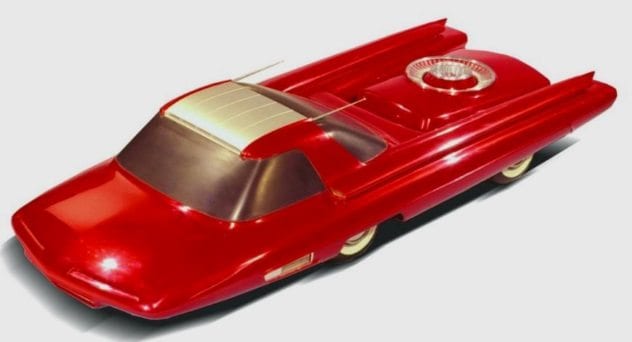 In 1957, Ford Motors announced the revolutionary car of the future: the Ford Nucleon. There was no harmful exhaust, it was whisper-quiet, and it could travel 8,000 kilometers (5,000 mi) without a single stop at the gas station. How was it possible? The secret was in the trunk—where they kept a small atomic fission reactor.

Most people were thrilled. Sure, a few worriers couldn’t see how better gas mileage was worth risking an apocalyptic radioactive disaster every car accident—but that wasn’t what sunk the project. They just couldn’t make the reactor and the radiation shield light enough to be feasible.

The Nucleon never saw the light of day, but radioactive spark plugs did. Firestone sold spark plugs powered by polonium-210 for two years. They claimed they worked better, but nobody really knew what to do with them when it was time to throw them out. The plugs didn’t sell, and they fell off the market.

9 Take The Family To Watch A Nuclear Bomb Explode 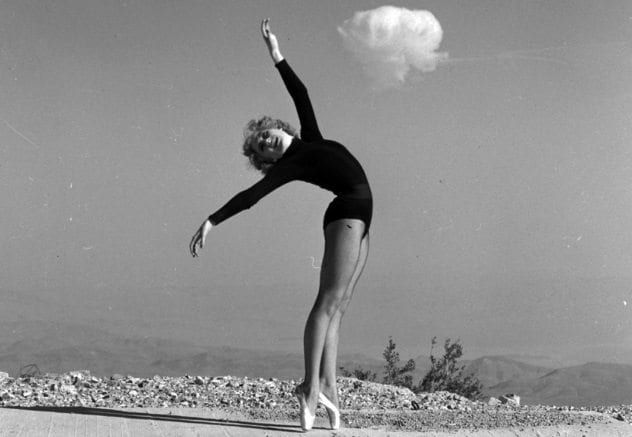 In the 1950s, the United States had a Cold War to win, and the only way they knew to do it was blast the Nevada desert with nuclear tests.

You’d think people would have tried to steer clear of a nuclear test site, but it was actually the exact opposite. Casinos in Las Vegas capitalized on it and sold tickets. People around the country flocked out to their “dawn parties,” where gamblers would play until the night sky lit up with an atomic blast 121 kilometers (75 mi) away.

It was the biggest tourism boom Las Vegas had ever experienced. They worked into it every way they could, selling Atomic Cocktails and holding beauty contests to crown Miss Atomic Blast. Sure, thousands of people got radiation poisoning, and 1.6 trillion gallons of water were contaminated, but it was a great party.

If a man couldn’t please his wife, there was once an easy solution: radium in his underwear.

There were a few treatments. You could pick up Vita Radium Suppositories, recommended, as the package said, “for sexually weak men.” For an extra radium punch, you could upgrade to the Endocrinator, if you had the cash. It sold for $1,000 in 1924. It was a little radium slip. “Put the instrument under the scrotum,” the instructions read. “Wear at night. Radiate as directed.” Once you were charged up, you could put on a Radium Nutex, a radioactive condom that glowed in the dark.

There were a few issues. The condoms were pulled off the market—not because they were radioactive, but because they didn’t work. As for the Endocrinator, its inventor mysteriously died of bladder cancer.

7 Stay Healthy: Get Plenty Of Plutonium 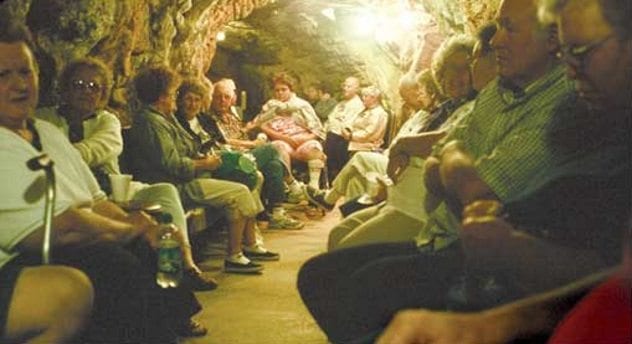 There was nothing better for the body, our grandparents knew, than to breathe in as much radioactive gas as physically possible. Naturally, they had spas to meet the demand. With a short trip to Montana, they could take care of their health with a visit to a radon mine. Spend ten days breathing radon gas and drinking radioactive water, the owners advertised, and every illness you have will go away.

You could also get a plutonium-powered pacemaker that would not only keep your heart running, but also bathe you and your loved ones in a soft radioactive glow. Surprisingly, the pacemakers actually worked pretty well. One woman who got one in 1973 is still using hers today, whereas our modern lithium models stop working after 10–15 years. The plutonium ones fell off the market because they were expensive.

6 Get Your Children The Toy They’ve Been Dreaming Of: Uranium 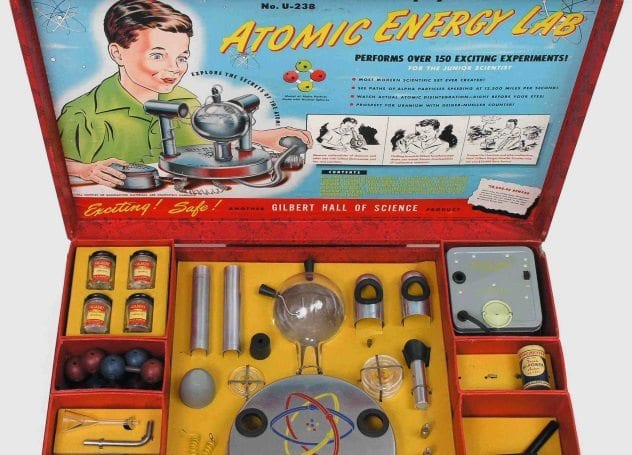 In the 1960s, all kinds of toys gave young boys and girls the chance to handle nuclear materials at home.

Loving parents might give their child a Radiumscope, a telescope with a piece of radium inside that the makers encouraged children to hold up to their eyes. Or they could get their own Geiger counter. “Safe! Exciting! Instructive!” the package advertised, and it would teach your kids an important skill: “Prospect for Uranium!”

Parents who really cared about their children’s future, though, would bring home the Atomic Energy Lab, a science kit that came with both uranium ore and radium and three fun experiments to try at home. Or they could upgrade to the pricier Gilbert Atomic Energy Lab, which had four different types of uranium ore.

5 Stay Cool With A Refreshing Glass Of Radioactive Water

One of the best-selling radioactive products was the Revigator, a water jug that was lined with the enriching power of uranium ore. Water without radioactivity, the advertisers claimed, was water “devoid of its life element.” The Revigator would bring back that “lost element of original freshness—radioactivity.”

Revigators were supposed to cure everything, from arthritis to senility to flatulence. They definitely added the radiation they promised. People who had a Revigator at home got double the EPA-recommended maximum exposure to radiation. That actually wasn’t the worst part, though. The uranium ore released arsenic and lead into the water.

Still, Revigators sold well. Hundreds of thousands made their way into homes across the country. They were incredibly popular—until, that is, a customer’s jaw fell off.

4 Give Your Teeth That Glistening Radioactive Shine 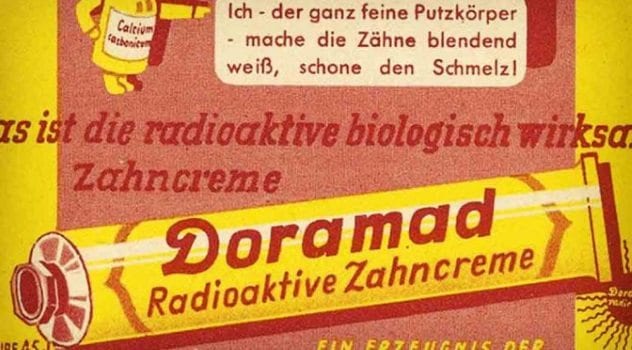 You could put radioactive material right in your mouth, too. During World War II, Germans looking for a premium toothpaste could spend a few extra marks for Doramad Radioaktive Zohncreme, the only toothpaste on the market fortified with radioactive thorium. The product promised to use its atomic powers to destroy bacteria and leave your enamel white and shiny. Thousands of people bought it, paying a major premium for the chance to have a radioactive mouth.

You could get uranium in your dentures, too. Dentists would blend uranium into fake teeth, hoping it would make them look more genuine under artificial lights—and put 3,000 times the low-level background radiation inside their patients’ mouths.

You could clean more than just your teeth with radiation, though. You could buy Radium Hand Cleaner, a product that promised to “take off everything but the skin,” which might just make it the first cleaning product to undersell how much it could really remove.

3 Is It Her Natural Glow—Or The Radium In Her Makeup? 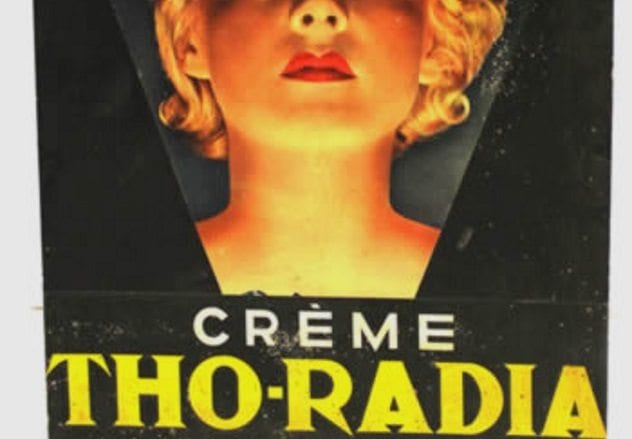 In the 1930s, you could buy a special radium-enriched makeup custom-made by Alfred Curie himself. The name sure sounded impressive, but Alfred Curie wasn’t anybody in particular. He was just a man who shared a last name with Marie Curie and capitalized on it.

His product was Tho-Radia, France’s best-selling makeup with the beautifying radioactivity of thorium and radium. That didn’t mean it was France’s only radioactive makeup, though. You could also get Artes, the makeup that boasted its radon as “the constituent which gives the cream its value,” or Radior, which promised an “ever-flowering fountain of youth” from the “energy rays of radium.”

The market for radioactive makeup went down when the French government started controlling it in 1937. Tho-Radia tried to press on with conventional products, but without the novelty of radioactive material, nobody cared, and the business went bankrupt. 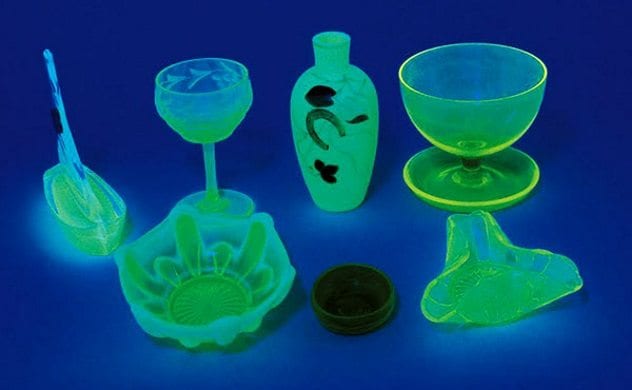 In the early 20th century, you could add a dab of life to anything with a little bit of radioluminescent paint, which glowed blue through the magic of radium-226.

Watches, clock dials, and equipment would all be brought to life with radium-226, applied by painters who worked with so much radium that their hair allegedly “sparkled almost like a halo” at night. By 1920, there were more than four million radioluminescent watches and clocks on the market.

Or you could decorate your home with uranium glass, beautiful sculptures and bowls that glow under black light. People would keep uranium glass on their windowsills and watch them light up when the Sun went down.

So, just how dangerous was this stuff? After the Fukushima nuclear crisis, Japanese authorities found “an alarming level” of radiation coming from an abandoned house miles away from the reactor. When they checked it out, they found out it had nothing to do with the reactor. It was a box full of radium for radioluminescent paint. 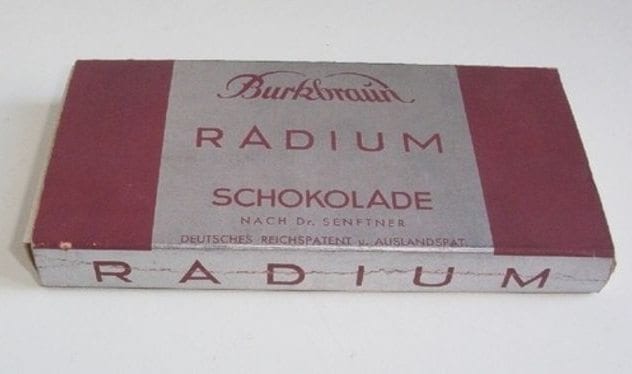 Even the food people ate was loaded up with radioactive materials. A hungry family looking to ensure they got their daily requirement of radium could pick up Radium Bread, made with water straight from a Revigator.

For a snack, you could pick up Radium Schokolade, a radioactive chocolate that made dubious claims all over the place. Their ads started by telling people, “It is known that chocolate is one of the most important nutrients,” and then went on to talk about the importance of getting radium “without delay into the bloodstream, and thus all the organs.”

Probably the craziest claim was in a chick feed ad. Farmers who fed their chicks radium, it promised, would have chickens that lay self-incubating eggs.

It took until 1938 for the FDA to start cracking down on all these made-up stories about the health benefits of radioactive materials, and the glory days of making every household supply glow with the refreshing aura of radiation started to fade.