To many, radiation is a modern specter of death, an invisible killer that withers once-healthy victims down to nothing. This technological boogeyman has taken lives and rendered places uninhabitable for generations. Of course, we’re exposed to various forms of radiation every day, but, as is true of many things, too much of it is lethal, exacting a devastating toll on the body.

With the fearful associations of radiation in mind, it may seem counterintuitive that some locations which have seen a greater-than-average amount of the stuff draw tourists. Nevertheless, that is precisely the case in a number of spots around the world. For various reasons, nuclear test sites, radioactive mines, disaster zones, and more receive visitors regularly. Here are five distinct examples. 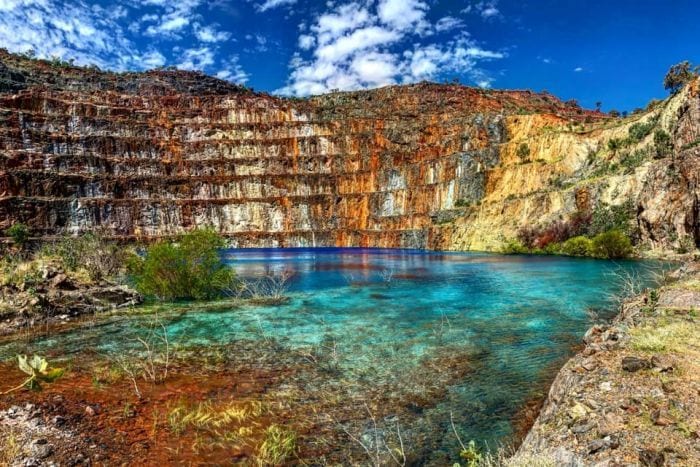 Australia’s Mary Kathleen uranium mine opened in the northwestern part of Queensland during the 1950s. Situated 3.7 miles (6 km) away was the eponymous mining town. At one time, its population numbered roughly 1,000, and the community featured a school, post office, movie theater, bank, and more. The mine operated until 1963, supplying the UK Atomic Energy Authority until Mary Kathleen Uranium Limited’s contract with the former was fulfilled. The mine reopened in 1974 and supplied several foreign power companies until 1982, when the mine ran dry.

It was subsequently closed, and the town’s buildings were removed. All that was left were foundations, a sign in the former town square, and a pit flooded with dank, green water. Somewhere along the line, due to various chemicals being released from the rock, that water turned a brilliant, vibrant blue. As a result, Mary Kathleen has a new population of sorts: Instagram users. Much like a similarly colorful site near Novosibirsk in Russia, the picturesque water in Mary Kathleen’s pit is motivating tourists to trek out to the site in order to obtain images that will be the envy of their friends on social media.

Is it safe to do so? According to Dr. Gavin Mudd of the Royal Melbourne Institute of Technology, radiation levels at the site are higher than typical background levels, but four-wheeling out there for a few eye-wateringly azure selfies won’t cause any real radiological harm. All the same, he advises trying to minimize the time spent at the pit, and certainly don’t swim in the water or drink any of it. The water’s slight radioactivity aside, that blue color is due to a soup of chemicals that aren’t recommended for ingestion.[1]

4 Hike Up A Sarcophagus Of Nuclear Waste 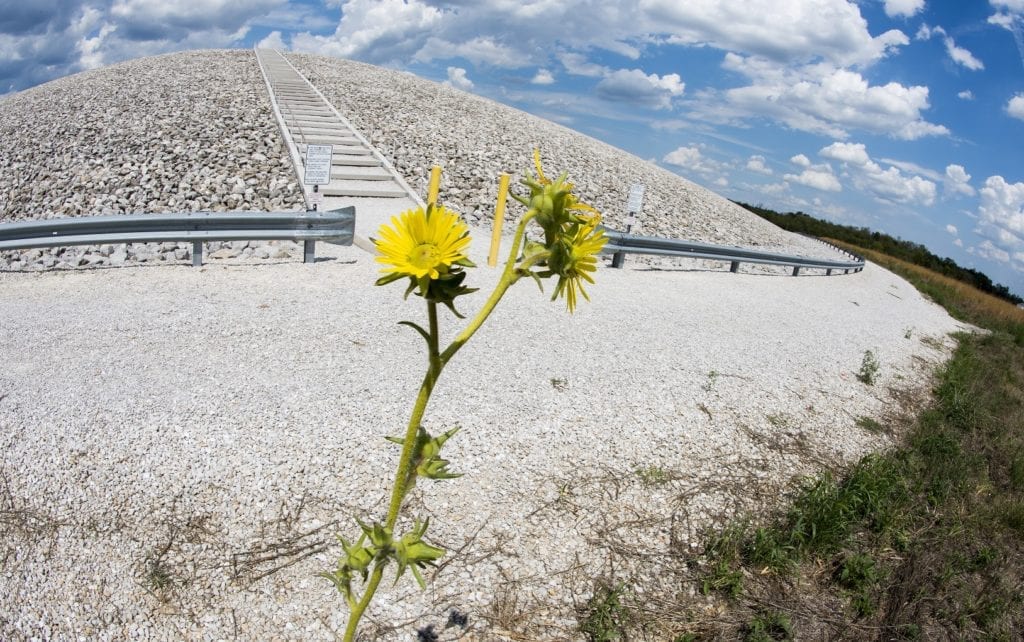 Standing in stark contrast to the green landscape around it is a barren, gray mound of rock near Weldon Spring, Missouri. The mound and surrounding lands have a storied history. During World War II, explosives were produced here. During the Cold War, uranium for nuclear weapons was enriched at the Weldon Spring Site. This went on until the late 1960s. After the fact, piles of uranium, radium, TNT, asbestos, and more were left behind. Ultimately, the solution was to encase the radioactive and chemical waste in a large, man-made hill. Today, it’s a tourist attraction.

The hill is officially called the Weldon Spring Site Remedial Action Project Disposal Cell, though it is also referred to as the “Nuclear Waste Adventure Trail.” Visitors can walk a set of stairs to the top of the mound, which offers a good view of the surrounding areas, given the flat terrain around the hill. The top is also popular with amateur astronomers at night and birdwatchers during the day. Nearby is a small museum with information about the mound and surrounding site. You might be relieved to know that more went into the disposal cell’s construction than simply covering a pile of nuclear waste with rocks.

According to two former security guards at the Weldon Spring Site, some visitors are afraid to climb the hill, given what’s encased below. The fact that absolutely nothing grows on the mound probably doesn’t inspire confidence, either. (The lack of vegetation was very much intended by the hill’s builders.) On the other hand, one of the guards noted that he worked there for 11 years and suffered no ill effects.[2] From 1956 to 1963, the British government conducted nuclear bomb tests at Maralinga, a site in South Australia. Seven devices were detonated, the largest of which was 27 kilotons. The late 1960s saw an early attempt at cleanup in the form of turning over the surface layers of soil, thus mixing them with the uncontaminated soil below. Twenty-two pits were filled with leftover bits of nuclear firings and capped with concrete. It is estimated that these pits contain a total of 8.8 pounds (4 kg) of plutonium. During the late 1990s, a much more thorough cleanup involved the removal and burial of hundreds of thousands of cubic meters of radioactive soil. The vehicles used for this operation were also buried.

The land was eventually returned to the Maralinga Tjarutja people. Having no desire to live full-time on land which was ground zero for several nuclear blasts, they instead made it a place for tourism. Today, you can take a bus tour of the Maralinga site. Highlights include the abandoned military village and airfield and, of course, markers denoting the locations of several nuclear detonations. Bits of sand fused into glass remain strewn about the desert terrain. Tourists can also visit the pits where the vehicles from the final cleanup were buried. (They’ve been capped with 16 feet [5 m] of clean soil.)

Maralinga saw far fewer nuclear explosions than other test sites around the world, so most of it is considered safe. One zone remains off-limits and is expected to be so for 25,000 years, but the tour buses do not come near this area. Visitors to the unrestricted areas are advised not to dig into the dirt, however. Those who abide by this rule should receive less than 1 millisievert of radiation during their visit.[3]

2 A Healthy Dose Of Radon? 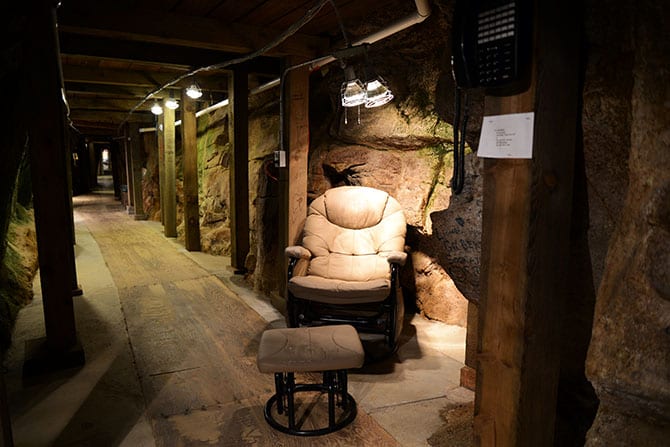 Radon is widely considered to a harmful gas. It is colorless, odorless, tasteless, and radioactive. The US Environmental Protection Agency and the World Health Organization regard it as a carcinogen. Despite this, some people swear that radon is a viable treatment for certain conditions, such as arthritis. As such, a number of caves and mines which people deliberately enter in order to be exposed to high concentrations of the gas exist around the world. One such location is the Free Enterprise Radon Health Mine in Boulder, Montana.

The facility began as a uranium mine in 1949 but switched to offering radon therapy three years later. Visitors can descend 85 feet (26 m) below the ground to relax in the mine, inhaling radon-rich air. The temperature averages 56 degrees Fahrenheit (13 °C), so warm clothing is a good idea. Heat lamps are also available. If one is claustrophobic, an aboveground “inhalatorium” can be accessed, into which radon from 105 feet (32 m) below the surface is pumped.

As far as most are concerned, you should ideally be exposed to no radon, though if the level in the air is below 4 picocuries per liter (pCi/L) action doesn’t necessarily need to be taken. Inside the Free Enterprise Radon Health Mine, you’ll be exposed to 1,700 pCi/L on average. A typical run of radon therapy entails between 30 and 60 hours in the mine across ten days.[4] If you’re a regular reader of Listverse, you probably know that tourists can visit the Chernobyl Exclusion Zone (LV LINK 2) and take tours. The popularity of the HBO miniseries Chernobyl has only increased travelers’ interest in the Exclusion Zone. And now, tourists can even enter the control room of Reactor 4, the site of decisions that led to the worst nuclear disaster in history. Beforehand, access was limited to cleanup workers and the occasional researcher or journalist.

This isn’t exactly the same thing as taking a walk around Pripyat. Radiation levels in the control room are reportedly as much as 40,000 times higher than normal. Visitors to the control room will have to wear hazmat suits and industrial boots. They can only stay for five minutes and must undergo two radiation screenings afterward.

This new excursion option comes on the heels of Ukraine declaring Chernobyl an official tourist attraction in July. While tours certainly occurred before that, they hadn’t been officially authorized. Around 85,000 people were believed to have visited the Exclusion Zone for the year as of October 2019. Day tours of the zone typically cost around $100. It’s not clear what a visit to Reactor 4’s control room will cost.[5]

For more travel lists just like this one, check out Top 10 Spooky Travel Destinations, and Top 10 Holidays that will Kill You.