Photography has come a long way. At times, it’s hard to believe that black-and-white photographs were the only type available some decades ago. Nowadays, we have so many options. And let’s not even talk about current photography fads like the selfie.

But we do not have a monopoly on photography fads. In fact, the people who lived when the camera was invented seem to have had better—and weirder—photography fads than we do. 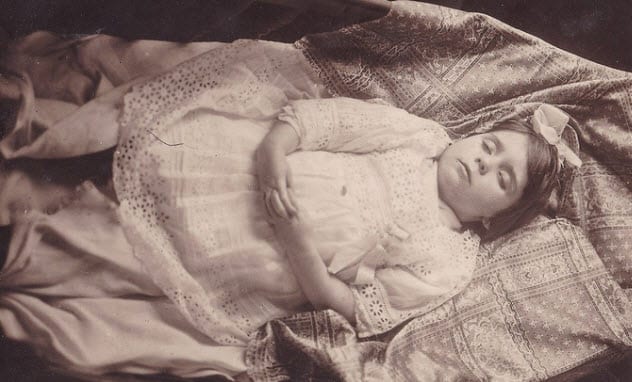 Postmortem photography was a bizarre genre that involved live people taking pictures with the body of a dead relative. It was common in the 19th and early 20th centuries.

Photographs were expensive at the time, and most people didn’t take pictures throughout their lives. The only opportunity was after their deaths. In fact, it was often the only picture of the deceased person.

Postmortem photography was possible because most people died at home. Most pictures were of children because infant mortality was high at the time. The children were dressed up—sometimes surrounded by flowers and toys—before the picture was taken. Their mothers even carried the kids sometimes. The pictures often looked as if the dead children were just napping.

Older children and adults were propped up with belts, pulleys, and levers. Some even stood as if they were alive. The eyes were often dead giveaways, and photographers sometimes added glass eyes to make it seem like the dead person was looking at the camera.

Considering that transportation was unreliable and dead people became stiff after a few hours (called rigor mortis), relatives often sent for the photographer before the person died. The photographers sometimes arrived after rigor mortis had set in. But that was usually not a problem because they were experts at manipulating stiff corpses.

Postmortem photography slowly disappeared as advances in medicine made people live longer. More people also died in hospitals instead of their homes. Cameras and photographs also got cheaper over time, and most people had other pictures of themselves and their relatives.[1] 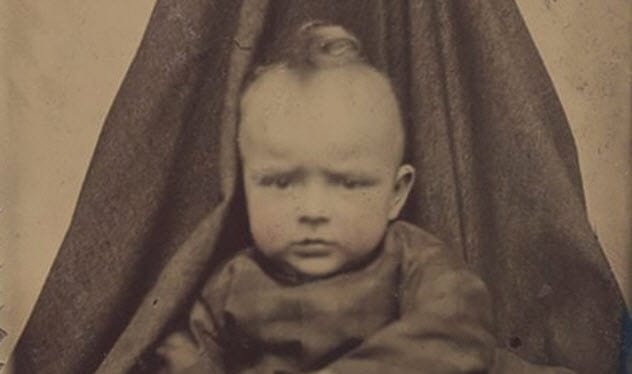 Early photography had long exposure times. The subject needed to remain still for 30 seconds before a picture could be taken. It is difficult to have an adult sit still and stare at a camera for 30 seconds. It is almost impossible to have a child in such a position.[2]

This was why mothers sometimes hid in the background while holding their children in place. This was called hidden mother photography. Most mothers covered themselves with clothes to blend in with the background. Others were disguised as chairs, backdrops, curtains, or whatever would hide them from appearing in the photograph. 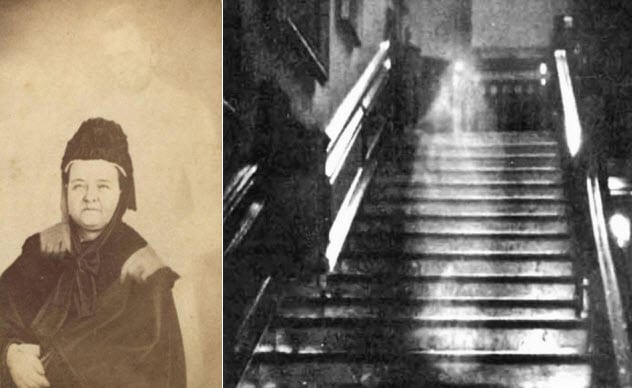 Spirit photography was another genre inspired by the long exposure times of early cameras. Subjects of early photographs were required to remain still to prevent ghosting. As you probably guessed from the name, ghosting means the subject appeared faint and transparent—as if they were a ghost.

In 1861, photographer William H. Mumler discovered a method of creating consistent ghosts in his photographs. It is believed that Mumler created his ghost pictures by inserting the glass plate of a previous photograph of the supposed ghost in front of a fresh glass plate he was using for his latest subject.

Instead of creating a unique genre of photography, Mumler used his knowledge to defraud his clients. He claimed that he could take real photographs of ghosts and soon had clients swarming to his shop to take pictures with ghosts of their late relatives. His clients included Mary Todd Lincoln, who took a picture with the ghost of her late husband, Abraham Lincoln.

People soon exposed Mumler’s ghost pictures as fake. There were claims that he raided the homes of his clients to steal pictures of their late relatives to use for his ghost glass plates. This was probably true because the ghost was sometimes a living relative. This effectively shattered Mumler’s photography career even though a court acquitted him of all charges.[3] 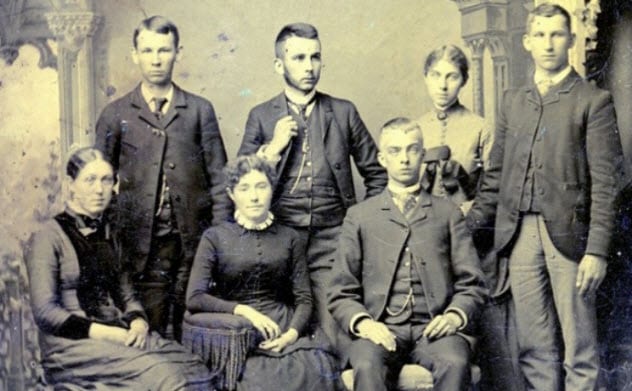 People rarely smiled in early photos, especially in pictures taken during the 19th and early 20th centuries. There were several reasons for this. Early photography was considered an extension of painting, and paintings were supposed to look natural. This means that smiling and anything other than a flat facial expression was not allowed.

There was also postmortem photography. As we already mentioned, pictures taken during postmortem sessions were often the only picture a family had of their late relative. The pictures were intended to immortalize a dead person—and a natural look was the most favored facial expression.

Another reason was the fact that Victorians did not smile. There was the widespread belief that only idiots smiled. Nobody wanted to be considered an idiot because they smiled in a photo.[4] 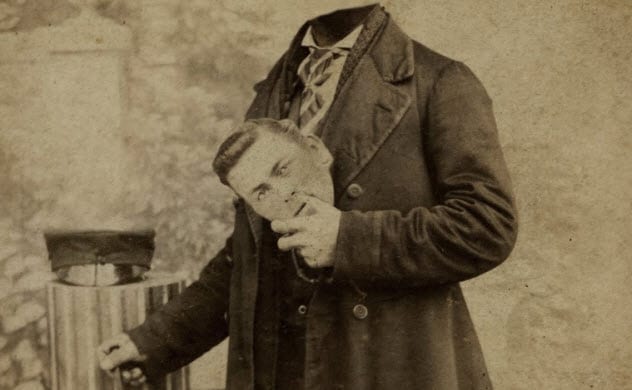 Early photographers manipulated pictures a whole century before computers and image editing software came along. Image manipulation started right after the invention of the first cameras when some photographers discovered a method of cutting and pasting two pictures together to create a new one.

Swedish photographer Oscar Rejlander used this technique to create the headless portrait genre in the 19th century. As you may have guessed from the name, one or several subjects in a headless portrait appeared without heads. The subject or somebody else in the picture held the head in their hands or on a plate.

The headless person or the other subject sometimes held a bloodied knife to make it seem like they had cut off the head. While this type of portrait can be easily created with the photo editing software available today, it was a chore to make in earlier times and was not as easy as it looks.[5] 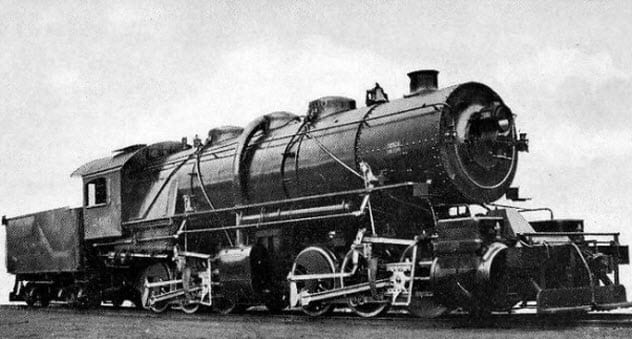 Locomotive and car manufacturers used the builder’s photo (aka official photo) to showcase their new or upgraded products. The shot either covered the front and side of the product or just the side. The locomotives were often without carriages, and the images were sometimes edited to remove the backgrounds.

Some manufacturers painted their locomotives gray so that they would look good in the black-and-white photographs. Darker areas of the locomotive were also painted in bright colors to make them appear brighter. The locomotives were repainted in their real colors after the photograph was taken.

Railroad companies hung the pictures in their offices and used them on postcards and in advertisements. Locomotive enthusiasts also got caught up in the fad. However, their pictures were called roster shots.[6] 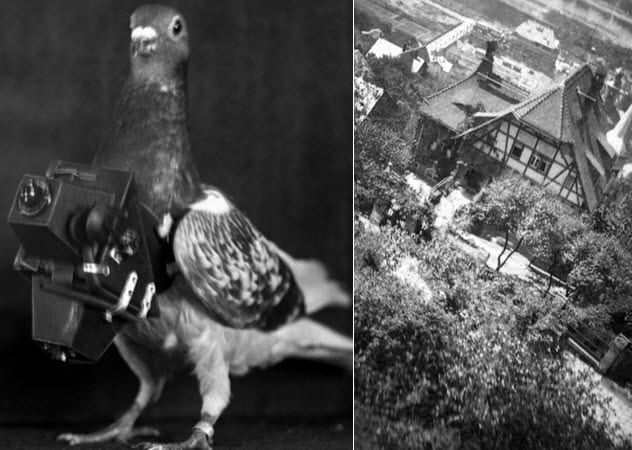 In 1907, Dr. Julius Neubronner filed a patent for the pigeon camera. As the name already hints, the camera was strapped to a pigeon. A timer allowed it to automatically take pictures when the pigeon was in flight.

The camera was a win for aerial photography at the time. In fact, its pictures are among the earliest aerial images ever taken. Before the pigeon camera, people took aerial photos with cameras attached to balloons and kites. However, kites and balloons were slower and could only travel limited distances.

This becomes more interesting when we realize that Dr. Neubronner never started off to create a camera for aerial photography. He invented the camera to document the routes flown by the pigeons.

This is not to say that the pigeon camera did not have its flaws. While useful for aerial photography, it was unreliable for surveillance because it shot images at random. This was why it lost its place to airplanes when World War I came along.[7] 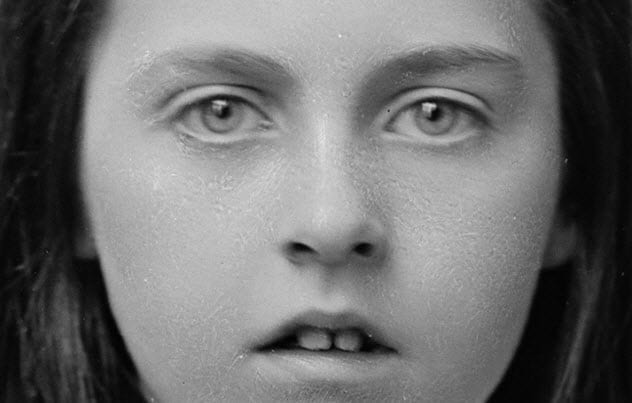 People started searching for ways to look better in pictures right after the invention of photography. But there were no computers or photo editing software during the Victorian era. The Victorians solved this problem with pencils to manually retouch the glass plates used to create the photos. 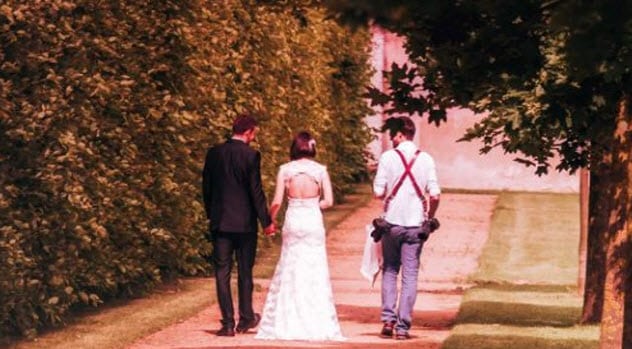 Some 19th- and early 20th-century pictures appear in color even though colored photography was only perfected in the mid-20th century. How was this possible? By painting over pictures, of course.

Johann Baptist Isenring started the hand-colored photograph fad when he painted over a black-and-white photo with pigment and gum Arabic. Several other photographers soon joined the fad. A popular photographer was Yokohama Matsusaburo, who doubled as a painter and lithographer.

Matsusaburo created his first colored photograph in the 1860s and was renowned for his hand-colored pictures. Hand-colored photography reached its height at the beginning of the 20th century but died a swift death when stable color films and color prints became available in the 1950s.[9] 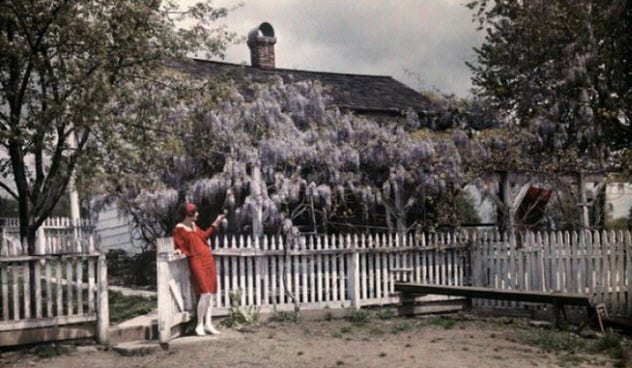 The “Red Shirt School of Photography” was a genre that appeared after the perfection of colored photography. The genre was unwittingly started by several magazines, which were all accused of deliberately adding red items in their pictures.

Rumors say that photographers working for the magazines traveled with red shirts, red umbrellas, and any other red items they could lay their hands on. They added these items to their photographs to make them look appealing. National Geographic was one of the magazines accused of starting the fad.

Colored pictures fascinated people when color cameras became mainstream in the 1950s. Editors soon realized that readers focused on the colors in the picture instead of the lines and movements that were the focal points during the era of black-and-white photos. So the editors concentrated on attracting more readers by using appealing images.

In fact, editors selected the pictures based on color. This was why photographers preferred taking pictures that included sharp and appealing colors like red. Some photographers traveled with actors wearing bright clothing or using bright accessories and made them walk into a scene just before taking the picture. The genre died in the 1960s.[10]

Read about more incredible photographs on Top 10 Incredible Early Firsts In Photography and Top 15 Photoshopped Photos That Fooled Us All.