While nowhere near as famous as the Salem witchcraft trials that took place in 1692, the great Connecticut witchcraft panic, which lasted intermittently from 1647 until 1697, set a precedent in American history. Of course, these trials presaged the later series of events in Salem. But the manner in which the trials came to an end opened the door for more rational and logical examinations of supposed supernatural phenomena. 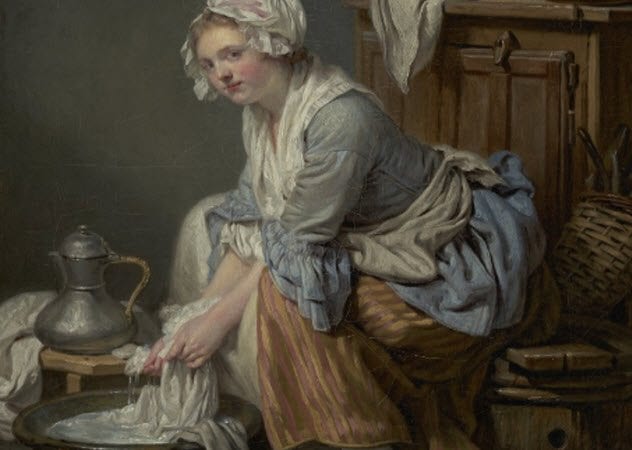 In the mid-17th century, a single witness was all it took to get someone tried for witchcraft. Sometimes, all that was needed was one accusation from a prominent member of society. In 1648, Mary Johnson was tortured into confessing that she was involved in witchcraft.

Two years earlier, Johnson, a servant, was accused of theft. A local minister named Samuel Stone believed that Johnson was guilty of much more, so he whipped her until she said that she had trafficked with the Devil. In particular, Johnson claimed that she had conspired with the Devil to complete her household chores, sleep with several men, and even kill a child. In December 1648, Johnson was executed for these crimes.

While in prison awaiting her trial, Johnson gave birth to a son who was quickly indentured as a servant to Nathaniel Rescew. The boy would remain under Rescew’s tutelage until he turned 21.

9 The First To Die 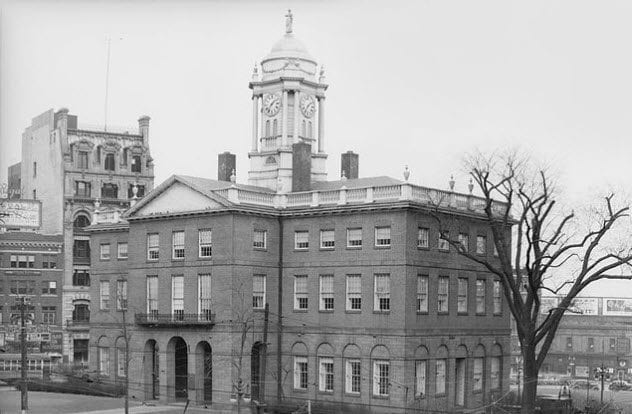 It is widely believed that Mary Johnson was the first accused witch to die in Connecticut (if not America). However, a woman named Alse (Alice) Young is the rightful holder of this ignominious title. On May 26, 1647, Young was hanged at Meeting House Square in Hartford (the site of today’s Old State House) following her brief trial.

Little is known about Young. It is believed that she was born in England around 1600. Her husband was a man named John Young, who settled in the town of Windsor sometime between 1630 and 1640. It likely that Young was executed for the crime of making herbal folk remedies for her fellow settlers. Alice Young Beamon, Young’s daughter, would later be accused of witchcraft while living in Springfield, Massachusetts.

8 The Peculiar Town Of Wethersfield 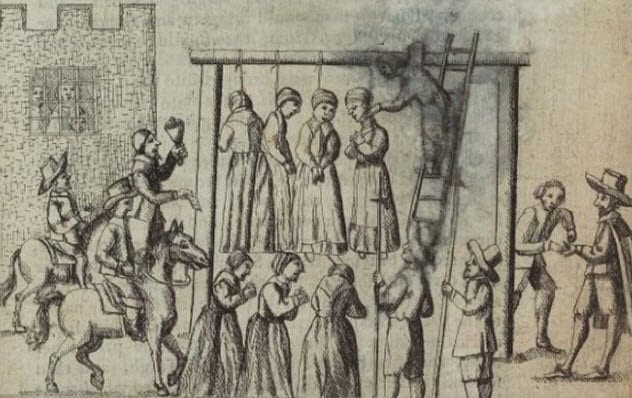 During the early 1650s, several individuals were hanged for supposedly practicing witchcraft throughout Connecticut. The convicted included John and Joan Carrington (both executed in 1651), Goodwife Bassett and Goodwife Knapp (executed in 1651 and 1653, respectively), Lydia Gilbert (executed in 1654), Rebecca and Nathaniel Greensmith, and Mary Sanford and Mary Barnes (all hanged in 1662).

Although some of these individuals came from places like Hartford, Fairfield, and Windsor, some came from or had connections to the town of Wethersfield. A later “witch,” Katherine Harrison, was a medical practitioner in Wethersfield.

Because of this fact and because Wethersfield was the hometown of Mary Johnson, the term “Wethersfield witches” has been used by historians and amateur scribes alike. Interestingly, the Carringtons and Johnson, all of whom were from Wethersfield, were active members of their community prior to the allegations levied against them.

In colonial America, many accused witches were neither fringe members of their community nor easily classifiable as “outcasts” or “misfits.” This was certainly the case in Wethersfield. 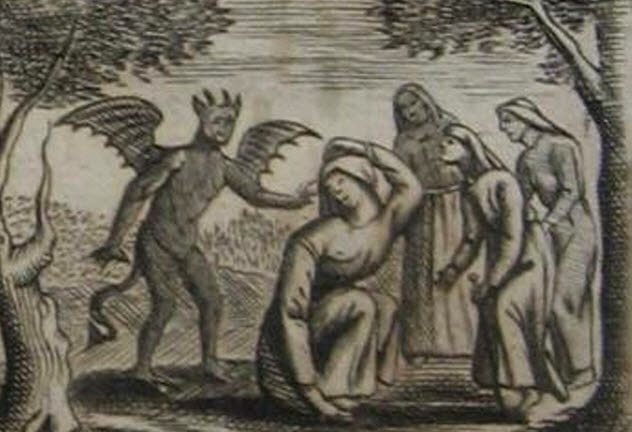 Between 1662 and 1663, the city of Hartford fell under the spell of an intense anti-witchcraft hysteria. Beginning in March 1662, Anne Cole found widespread support from her community when she accused Rebecca Greensmith and Elizabeth Seager of using magic to torment her. When an eight-year-old Elizabeth Kelly died after suffering prolonged stomach pains, her parents accused a woman named Goody Ayres of strangling their daughter through the use of black magic.

Many of the stories from Hartford were incredibly bizarre. One woman claimed that Satan had caused her to speak with a Dutch accent, while one eyewitness claimed that she saw her neighbors transform into large black hounds during the nighttime. All told, three accused witches were executed.

6 The Saga Of Katherine Harrison 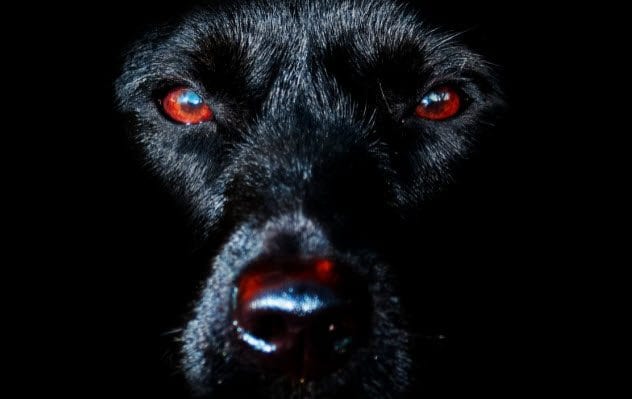 Amazingly, despite being accused of witchcraft by approximately 30 witnesses, Harrison was acquitted after a jury could not reach a verdict. She returned to Wethersfield, but several residents signed a petition urging that she be sent back to prison. Finally, in May 1670, Harrison was once again released from prison after the colonial governor and several clergymen challenged the evidentiary standards used in Harrison’s case.

5 The Importance Of John Winthrop Jr. 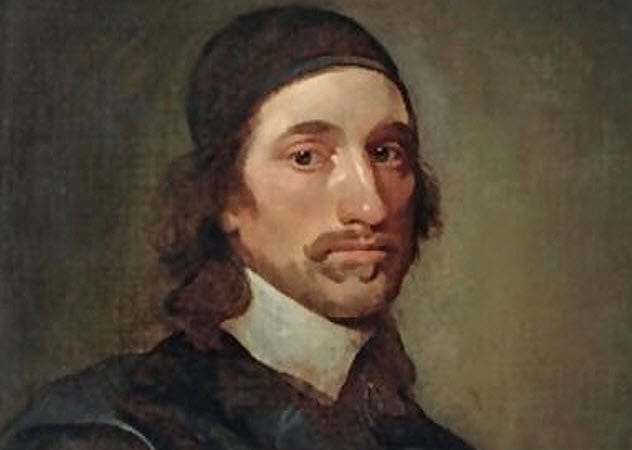 Also known as John Winthrop the Younger, Winthrop was the son of John Winthrop, the first governor of the Massachusetts Bay Colony. Prior to becoming the governor of the Connecticut Colony, the younger Winthrop had been educated in England and had traveled extensively in Europe. According to one historian, Winthrop learned alchemy in Europe and practiced folk magic for much of his life.

As such, Governor Winthrop knew firsthand how difficult practicing “natural magic” could be. As governor, Winthrop began to question the flimsy evidentiary standards of his colony’s witchcraft trials. In particular, Winthrop grew to question the legitimacy of “spectral evidence,” or eyewitness claims about being “tormented” by spirits or seeing spectral familiars. 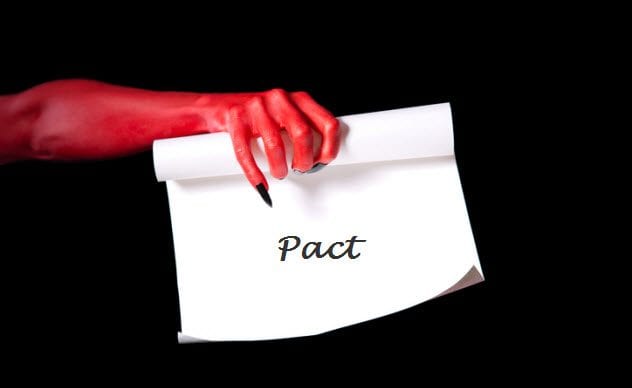 Because of Governor Winthrop’s hesitancy to accept “spectral evidence,” he played a major role in the two acquittals of Katherine Harrison. Indeed, following the conclusion of the Hartford panic in 1663, Winthrop, along with several magistrates and clergymen, established new guidelines for future witchcraft trials.

First and foremost, Winthrop clearly defined what constituted diabolism. Winthrop believed that only pacts, or sealed contracts made with the Devil, made someone a witch. Crop failures or sudden deaths did not necessarily mean that witchcraft was afoot.

More importantly, Winthrop decreed that for a witchcraft trial to proceed, two people had to see a witch’s specter at the same time. This ruling drastically reduced the number of witchcraft panics for almost three decades. 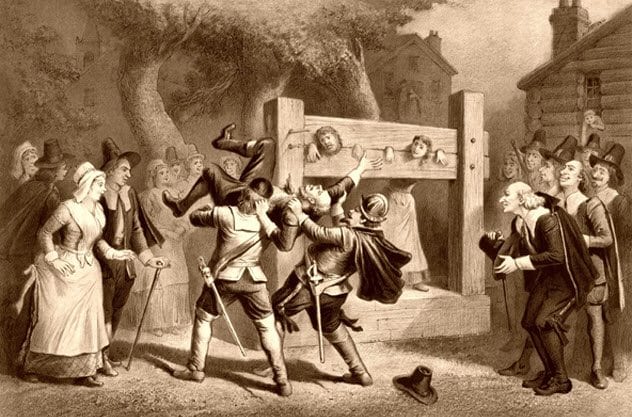 The standards set by Connecticut held for many years. In 1688, however, a new witchcraft panic gripped Boston, the largest and most important city in Puritan America. Following the death of Winthrop in 1676, New England lost the greatest champion of a rational approach to the supernatural.

Winthrop was replaced by Increase Mather, a Harvard-trained theologian and the author of “Remarkable Providences.” Mather believed strongly in the existence of witches. Although he accepted many of the dictates established by Winthrop and the Connecticut magistrates, he nevertheless oversaw the execution of Goodwife (“Goody”) Ann Glover.

Ann Glover and her daughter worked as housekeepers for the family of John Goodwin. Following a dispute over some missing laundry, the Goodwin children began acting strangely. A local doctor diagnosed them as being bewitched.

Soon enough, Glover, an Irish Catholic who probably only spoke Gaelic, was accused of being a witch. Mather himself deduced that the Goodwin children were bewitched. Glover was hanged in November 1688. She would be the last “witch” to be hanged in Boston. 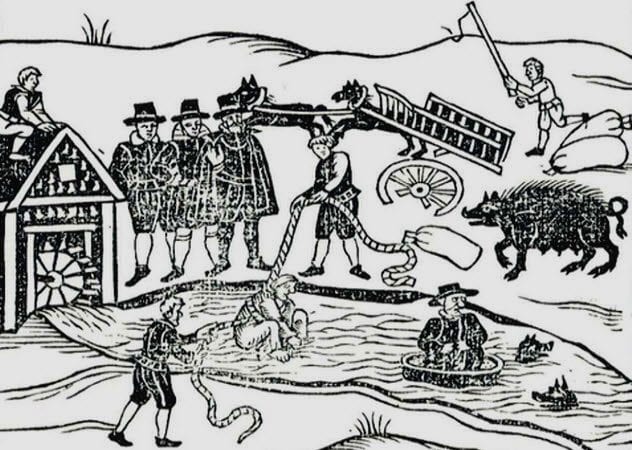 During the same year as the Salem witchcraft trials, a servant named Katherine Branch mysteriously fell ill. For weeks, she suffered convulsions and mused wildly about her affliction. At one point, Branch began telling people that a cat often spoke to her about possessing the finer things in life. Branch also said that this cat would sometimes transform into a woman.

Following a flurry of accusations, two women—Elizabeth Clawson of Stamford and Mercy Disborough of Fairfield—were formally accused. Fortunately, many people were suspicious of Branch’s story. Following a series of experiments (including dunking the accused witches in a Fairfield pond), both Clawson and Disborough were ultimately acquitted.

1 The Last In Line 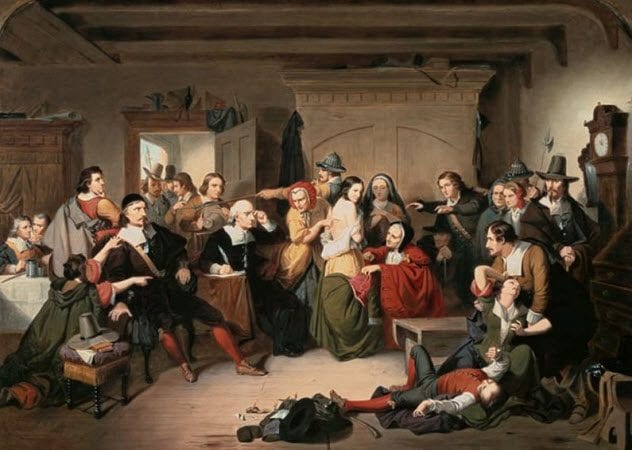 Almost five years after the conclusion of the witchcraft panic in Salem, the Benhams of Wallingford (some documents say that they were from New Haven) were tried for making a pact with the Devil to gain the power of transformation. Similarly, both Benhams were accused of using their spirits to inflict bodily harm on their neighbors.

Luckily, both Benhams were acquitted. It’s likely that early criticisms of the proceedings in Salem helped to save these two women from the gallows.

Benjamin Welton is a freelance author based in Boston. His work has appeared in The Weekly Standard, The Atlantic, Listverse, and other publications. He currently blogs at literarytrebuchet.blogspot.com.