Libraries captivate the imagination. These storehouses of knowledge contain countless secrets and mysteries. Unfortunately, many of these treasure troves of wisdom have been lost over the centuries. Those that remain are preciously guarded. Knowledge is power. 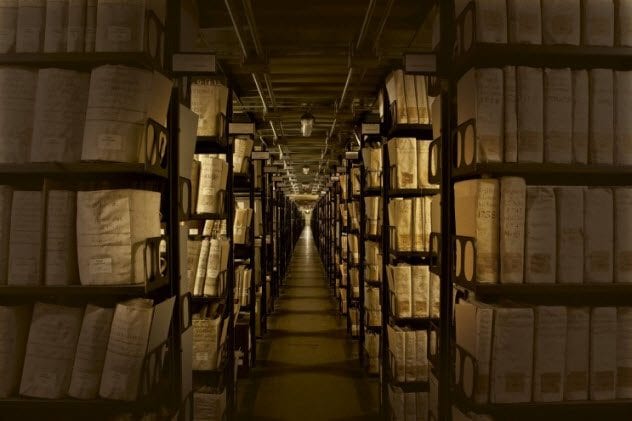 The Vatican’s Archivum Secretum is one of the world’s most mysterious libraries. Founded in 1612, the archives were closed to the public until 1881. Pope Leo XIII allowed only Catholic scholars into the collection.

Since then, the restriction has loosened—slightly. Journalists, students, and amateur historians are strictly prohibited. Only accredited scholars who meet the Vatican’s stringent requirements can enter. Even then, they can only request three items per day.

In 2012, the Vatican allowed 100 items out of the secret archives. Considering the collection’s 80 kilometers (50 mi) of shelves, this barely begins to hint at the mysteries of the Archivum Secretum.

The released documents included Leo X’s papal bull excommunicating Martin Luther, transcripts from the trials of the Knights Templar and Galileo, a petition from English clergymen asking for an annulment of Henry VIII’s marriage, and the Inter caetera, which split the New World between Spain and Portugal.

9 Lost Library Of Ivan The Terrible 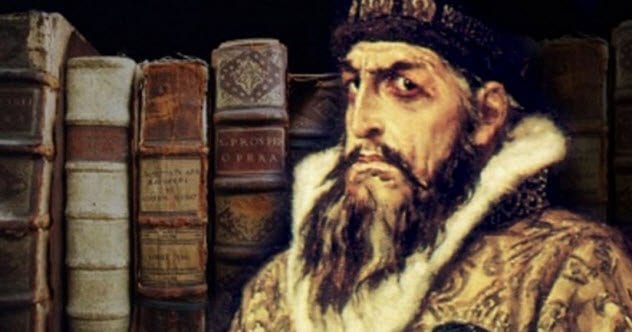 One of the most legendary lost libraries belonged to Tsar Ivan IV Vasilyevich (aka Ivan the Terrible). In 1472, Ivan’s grandfather, Ivan III, an avid book collector, married Sophia Paleologue, niece of the last Byzantine emperor. When she moved to Moscow, she brought her own book collection, which was rumored to contain most of the Library of Constantinople as well as manuscripts from the Library of Alexandria.

Ivan the Terrible added to the library throughout his life. The collection eventually contained ancient and contemporary works in Russian, Greek, Latin, Hebrew, Egyptian, and Chinese.

Ivan stored his collection in the Kremlin’s basement. Scribes were commissioned to translate all the works into Russian. Some refused, fearing the “black magic” powers that the tsar could gain.

After Ivan the Terrible’s death, the collection vanished. Some claim that it was destroyed in a fire. Others insist that it still exists but has been cursed by the terrible tsar. 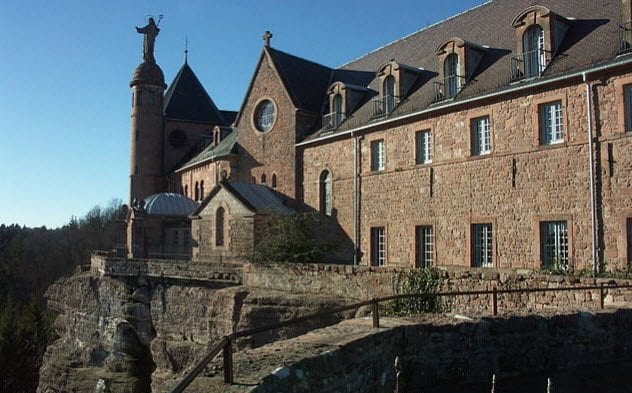 The ancient Alsatian monastery of Mont Sainte-Odile is home to secret passages and mysteriously vanishing books. In 2000, people began to notice that some of the abbey’s ancient manuscripts were disappearing.

Sometimes, one was missing. Other times, a dozen. The locks were changed three times. The windows were sealed. But the thefts continued. Some began to suspect that there was a secret entrance to the monastery.

A two-year search yielded no results until a gendarme leaned against a bookshelf that opened a plank and revealed a hidden room. Officials installed a camera and waited. That night, they caught former professor Stanislas Gosse red-handed.

Gosse had figured out the location of the passage from a magazine article, which had hinted at a hidden room where senior abbey members spied on the younger ones. Police recovered all 1,100 missing books dating back to the 15th century from the scholar’s apartment. 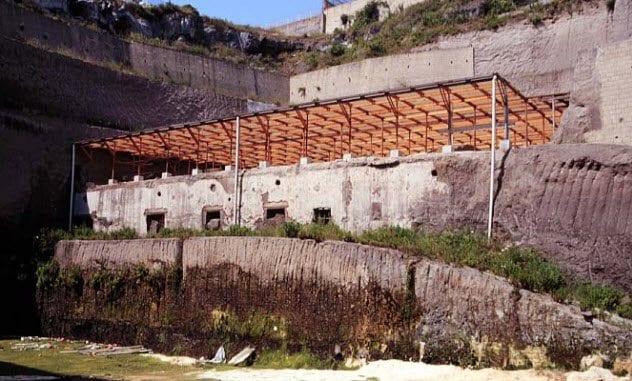 In 1752, archaeologists uncovered the oldest known Roman library during excavations of the ancient city of Herculaneum. In AD 79, Mount Vesuvius erupted, destroying Herculaneum. The site was preserved under a thick layer of volcanic ash.

The Villa of the Papyri was a private residence that contained 1,800 papyrus scrolls. The papyri were carbonized in the eruption. This preserved the documents but also made them nearly impossible to read.

Some of the Herculaneum papyri were chopped opened with a butcher knife. Monk Antonio Piaggio invented an unrolling device specifically for these papyri. The first papyrus took four years to unroll.

An initial report of findings was published in 1790. Recently, digital photography, microscopy, and X-rays have been used. The results remain unsatisfactory. Romans used a carbon-based ink that is indistinguishable from the charred papyrus in areas. 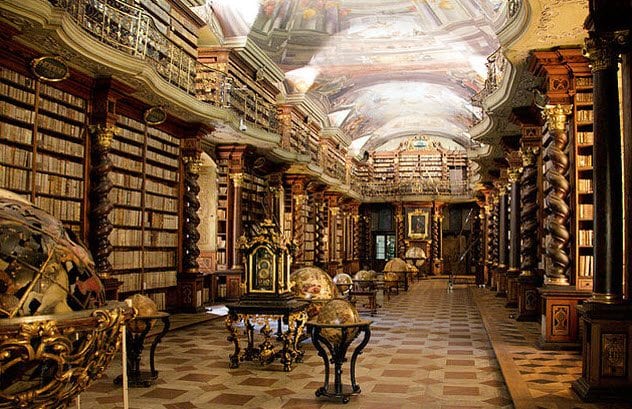 Researchers recently uncovered 13,000 occult and witchcraft books that once belonged to SS chief Heinrich Himmler. The collection was discovered in Prague’s National Library of the Czech Republic.

The depot that held Himmler’s collection had not been accessed since the 1950s. Most of the books were collected during World War II when the Nazis scoured the Earth for supernatural tomes. Some of the volumes are extremely rare.

From 1935 to 1944, the Nazis collected various occult works and put them into a specific section called “H,” which was derived from the first letter of Hexe—the German word for “witch.” The Nazis raided over 260 libraries to create Europe’s largest collection of witch trial records.

Himmler was obsessed with the occult and believed that the power of the old masters would allow the Nazis to rule the world. He wove pre-Christian mysticism into Nazi political life and officially approved pagan holidays. 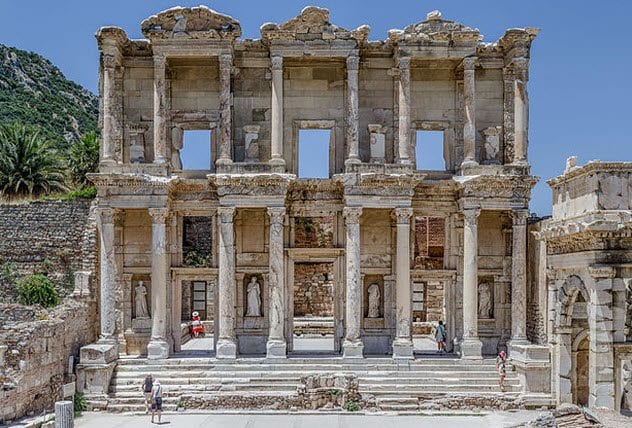 The Library of Celsus is one of the most mysterious libraries of the ancient world. Commissioned by Tiberius Julius Aquila in honor of his father in AD 114, the temple of knowledge is built in Ephesus, Turkey.

The collection once included 12,000 scrolls, making it the third-largest library in Classical Antiquity. However, none of the works survived the library’s destruction in AD 262. Some claim that Goths burned the sanctuary of learning. Others claim that the library fell in an earthquake.

No records survive about its contents or administration. However, the library’s elaborate architecture hints at the treasures it once contained. The monumental facade contains statues personifying wisdom, knowledge, intelligence, and virtue. 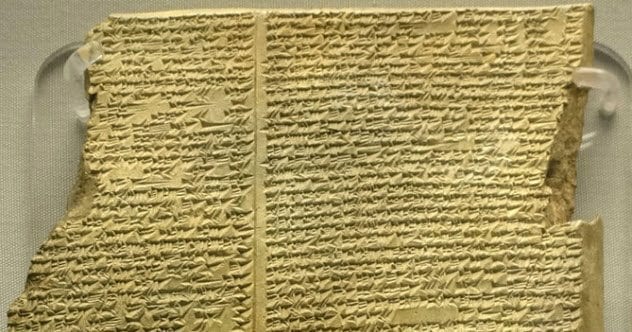 While excavating ancient Nineveh in the 1850s, archaeologists discovered the oldest surviving royal library in the world. The Library of Ashurbanipal held over 30,000 clay tablets inscribed with cuneiform text.

The tablets contain literature, technical manuals, and government records. The staggering number of tablets makes the Library of Ashurbanipal one of the largest libraries of the ancient world. The king’s personal library contained an array of works on medicine, poetry, geography, science, and magic.

Reigning from 668 to 627 BC, Ashurbanipal was the last great ruler of the Neo-Assyrian Empire. He extended his territory to its greatest area, swallowing Persia, Babylon, Syria, and Egypt. The Royal Library at Nineveh is considered one of his greatest accomplishments. 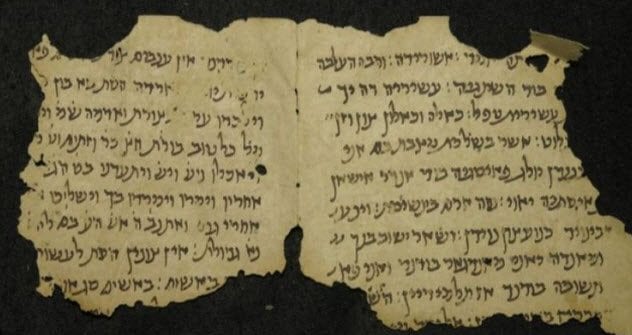 An ancient library of nearly 1,000 manuscripts was discovered in a cave in Afghanistan. Containing Hebrew, Aramaic, Persian, Judeo-Arabic, and Judeo-Persian texts, the collection belonged to a Jewish family who once lived along the Silk Road.

The texts contain poetry, personal letters, commercial records, and legal documents. The find sheds fascinating new light on the life, work, and family units of the Afghan Jewish community from the period. The documents are attributed to a Jewish family headed by patriarch Abu Ben Daniel.

The collection of documents was acquired by an Israeli antiquities dealer in 2013. Lenny Wolfe came across the ancient library as part of an investigation into the Afghan Genizah.

There was a cryptic reference to a storehouse of 300,000 Jewish manuscripts discovered in Egypt—hinting at an even larger collection of ancient documents. Why this cache was buried in a cave roughly 1,000 years ago remains a mystery. 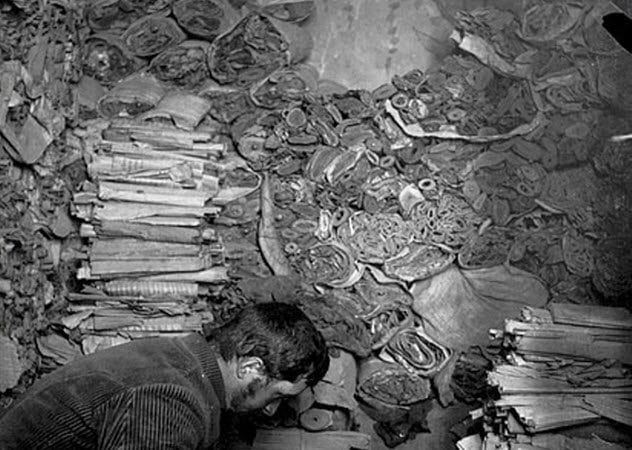 In 1900, a Taoist priest discovered a secret library within a cave in the Mogao Grottoes. The self-appointed guardian of the ancient Buddhist temple, Wang Yuanlu cleared sand away from the floor of one of the temples and revealed a hidden door.

Inside was a small cave containing thousands of ancient manuscripts and paintings. Constructed in the ninth century, this was originally a memorial cave for a Buddhist monk. Experts believe that the “Library Cave” was sealed in the 11th century.

Wang reported the find to local authorities, but they had no interest. Years passed, and his repeated efforts to convince Chinese officials of the documents’ importance failed.

In 1907, a Hungarian researcher purchased a large number of the manuscripts. The next year, French archaeologist Paul Pelliot cut a similar deal. In 1961, Chinese officials recognized the importance of the Mogao Grottoes and declared the network of Buddhist cave temples a national monument. 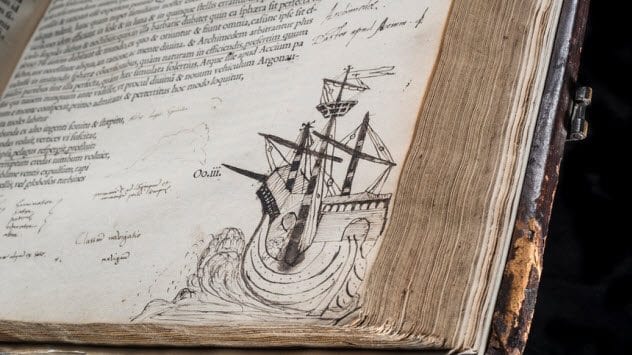 In the 1580s, John Dee amassed one of the largest libraries in England. The scholar, magician, and astrologer to Queen Elizabeth I is said to have had 4,000 works in his collection.

When he traveled to the Continent in 1583, his library was raided and lost to history. The theft attests to the precious value of knowledge in the Tudor era. Fortunately, Dee had catalogued his collection, which contained an array of subjects including geography, alchemy, natural history, and love.

One hundred books from his esoteric collection still exist at the British Museum. The fact that the collection contains scientific and magical works reveals that the difference between the two was not always clear-cut. In the 16th century, an interest in mathematics could be viewed as dabbling in the occult.

Dee’s collection contains copious notes that he made in the books’ margins. These scribblings contain observations on significant passages, alchemical musings, scratched-out horoscopes, and even biographical information.