Traditionally, stained glass subject matter has been religious, but the more unusual of these windows have also illustrated the natural history of pathogens, commemorated the anniversary of a military organization, and honored a fallen comrade in arms. They’ve incorporated results of modern medical technology, added to energy supplies, and corrected false impressions created by how the planet itself is mapped. A few have also engendered anger or discord. 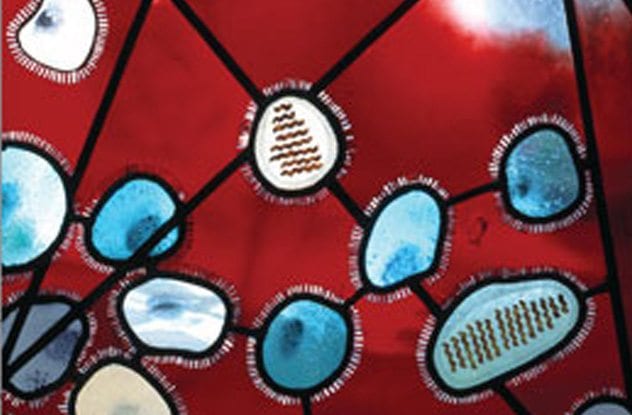 Working from articles and electron micrographs of the influenza A viruses, artist Jenny Hammond designed a stained glass window depicting the infectious agents. The work, commissioned by Robert and Marjorie Webster of Memphis, Tennessee, occupies a place of honor near the entrance to their home.

Dark blue glass in the window’s upper right corner represents the global problem of the viruses; the figures across the top of the window depict the viruses’ transmission route from aquatic birds to pigs to humans. Particles of the viruses spread across a background of red glass, indicative of the fever associated with influenza A infection. The particles themselves show how they attach to their hosts’ respiratory passages and lungs and how they develop new strains. 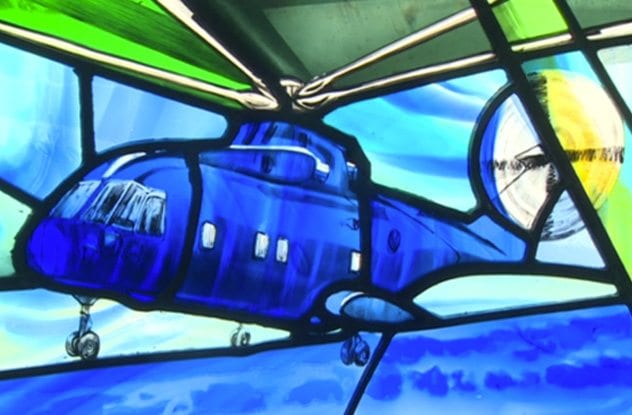 Most churches’ stained glass windows are dedicated to depictions of biblical scenes intended to support the faith of their congregants. However, England’s Royal Chapel of St. Katherine Upon the Hoe, inside the Royal Citadel church, commemorates the 300th anniversary of the Royal Artillery. The window shows a Merlin helicopter, amphibious boats at anchor off a beach, and soldiers wading ashore.

The citadel is the home of the 29th Commando Regiment. Although the regiment’s vicar, Karl Freeman MBE, admits the window is an unusual example of church glass, it represents “an integration of faith into regimental life.” 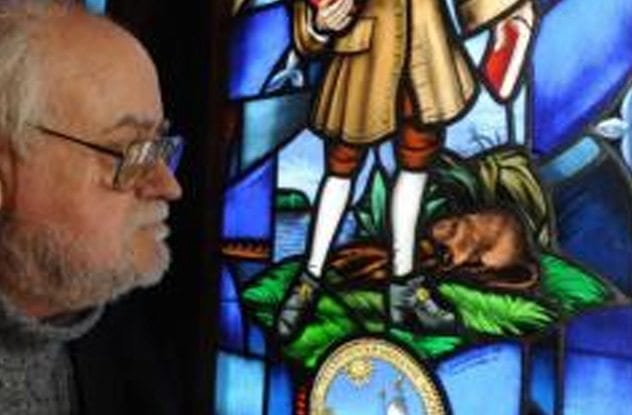 Senior warden John Verrill explained one of the unusual stained glass windows in St. Philip’s Episcopal Church in Quantico, Maryland: a late congregant, Richard Hall, who commissioned the window to honor the memory of his wife, Amelia, “wanted something that was representative of our Eastern Shore area.”

Muskrats are indigenous animals, so Hall’s window includes the animal, nibbling at the heels of the clergyman featured in the glass—the Reverend Thomas Bray, who helped organize the Anglican church in Maryland in the early 1700s and “left a legacy of literacy and books.” There’s another reason for the selection of the muskrat, too. The church’s priest, Father Nathaniel Pierce, observed, “About 60 years ago, a Roman Catholic bishop in Wilmington said it was okay to eat muskrat during Lent, so annual muskrat dinners were held here to raise money for churches.” 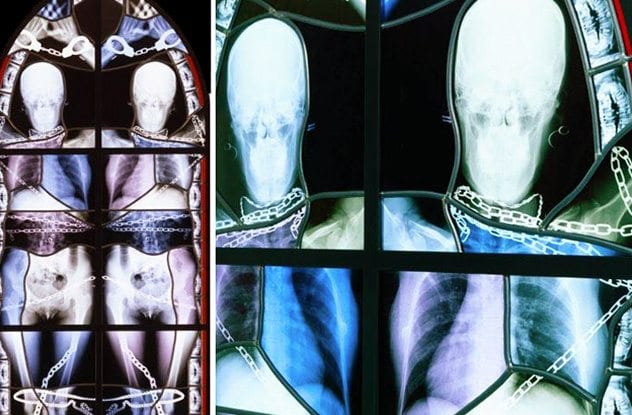 Artist Wim Delvoye’s stained glass windows are more nightmarish than inspirational. Fashioned of recycled X-rays of skulls, skeletons, and assorted bones, the windows adorn the walls of a 17th-century Flemish Baroque-style chapel that, made of laser cut steel, is unusual in itself. 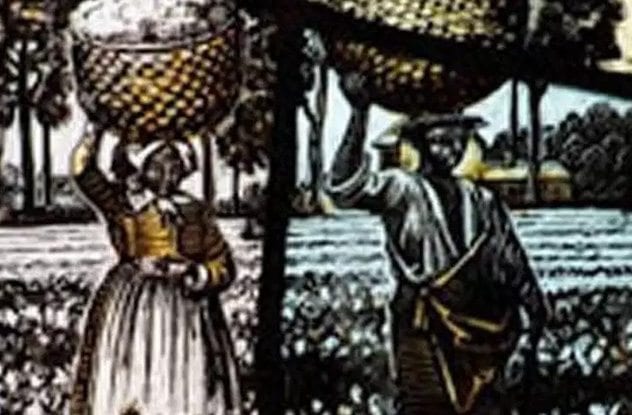 Corey Manafee, 38, made his displeasure concerning a stained glass window at Yale University’s Calhoun College known by smashing it.

A former dining hall employee, Manafee admits he shouldn’t have destroyed the window, and the university has declined to press charges or to seek restitution. Nevertheless, Connecticut has charged him with felony criminal mischief. He was also charged with misdemeanor “reckless endangerment,” since the broken glass could have injured a bystander.

Prior to Manafee’s vandalism, the university had planned to remove the window, which showed a pair of slaves entering a cotton field. Charges were dropped, and Manafee was offered his job back, but his agreement with the university prohibits him from speaking about the case. Intended to reconcile the North and South, the stained glass windows in the Washington National Cathedral in Washington, DC, honoring Confederate officers Thomas (“Stonewall”) Jackson and Robert E. Lee have instead been divisive. The windows display the Confederate flag, which some regard as a reminder of slavery and racial discrimination.

Since 1958, the Very Reverend Gary Hall, the dean of the Cathedral, has called for the windows’ removal. Since the windows’ removal will require “time, energy and money,” an explanatory display will be positioned near the windows “to explain them in their historical context.” A representative group, Hall said, will determine which new windows will replace them and decide the fate of the Jackson and Lee windows. 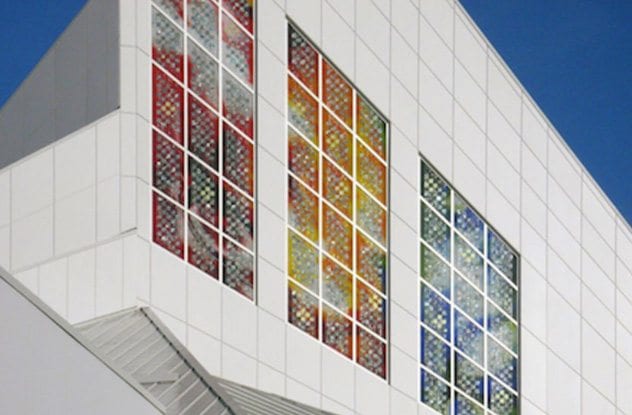 Sarah Hall’s environmentally friendly collection of glass facades of dichronic glass connect to Saskatoon’s electric power grid. Described as “silver, trapezoidal solar cells of a various sizes sandwiched between layers of colored glass,” the windows, known collectively as Lux Gloria, are installed in a cathedral in the Canadian city.

The work of art should generate 2,500 kilowatt-hours of energy each year, powering the cathedral’s electrical needs. Leftover energy will fuel the city’s power grid. 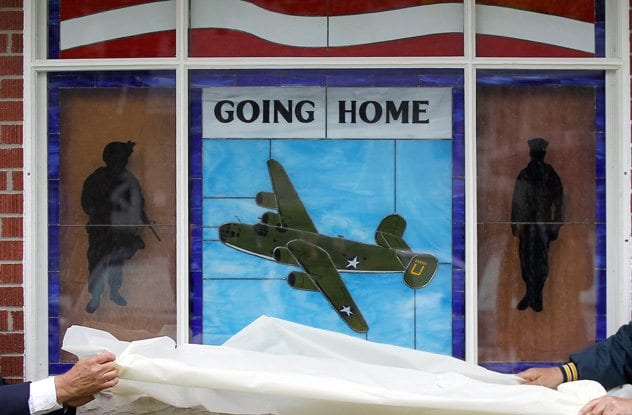 The Rose-Harms American Legion post in Grafton, Wisconsin, remembered one of its own on May 27, 2013. Commander Jim Arentz and former Commander Al Richards that day unveiled a stained glass window depicting the B-24 bomber Lt. Roy Harms flew during the World War II raid in which he and his crew died.

Flanked by figures of a sailor and a soldier who represent “the land-sea-air forces that fought” in the war, the bomber faces Harms’s hometown. Created by Gary Elshoff, known for his well-researched aviation art, the window, called “Going Home,” exhibits the “exact color of olive drab used on the B-24.” It omits the camouflage paint splotches that “other aircraft flown in the bombing raid of the Ploesti, Romania, oil refineries” bore but Harms’s plane did not, and it includes the “U and tail number—240781”—of Harms’s bomber. 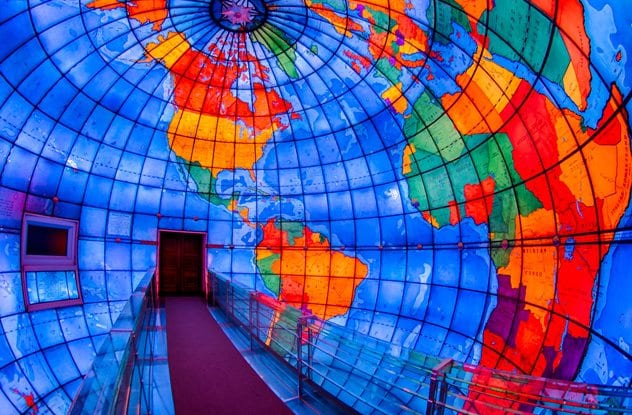 The Mapparium, a three-story stained glass globe in the library of the Christian Science Publishing Society building in Boston, Massachusetts, counteracts the distortion of land masses reflected in two-dimensional map projections. A walkway leads through the globe. Following it to the center of the sphere allows visitors to see the world as it existed in 1935, when the map was created. Composed of more than 600 panes of curved stained glass, the globe is in perfect relative scale. For example, due the map projection distortion effect, Greenland, as it is represented on a traditional map, looks much larger than it is. On the stained glass globe, without this distortion, it appears correctly.

Designed by architect Charles Lindsay Churchill, who was inspired by seeing the giant globe in the New York Daily News building, the $35,000 ($617,555 today) stained glass globe shows colonial Africa, and French Indochina, instead of Southeast Asia. Strange names, such as Transjordan (in the Middle East), Balochistan (now a province of Pakistan), Bechuanaland (now Botswana), and Yanna Tuva (now part of Russia), identify other 1935 nations.

Churchill designed the panes to be replaceable, so the library could keep up with changes in the world’s political landscape, but it was later decided that, as a work of art and history, the Mapparium should remain unchanged. 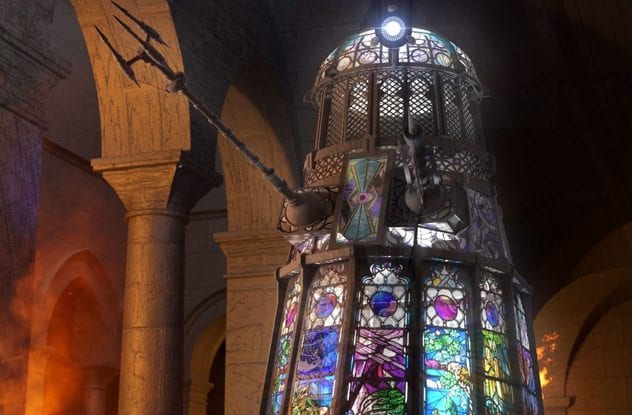 Daleks are the mutant extraterrestrials of the British Doctor Who science fiction television series. Typically shaped like giant gumdrops made of metal, they usually have a single telescopic arm and a dome equipped with a solitary mechanical eyestalk. The Big Finish version of the mutant alien is “wrought out of iron and plated with religious-themed stained glass panels,” and it “has a trident at the end of its arm.

The vertical stained glass panes, or panels, around the bottom half of the creature’s tapering cylindrical body resemble arched windows comprising four panes each. Together, they form a single, unified scene. The model is weird, even by Doctor Who standards, but it’s also sure to catch the eye, just as it’s intended to do.