The image of Jesus often falls into recognizable types. There is the baby Jesus being cared for by the Virgin Mary. There is the serene Prince of Peace preaching to humanity. And there is the Crucified Christ who died for our sins. A wider variety of images, however, derives from an earlier period before the codification of the representations of Jesus. 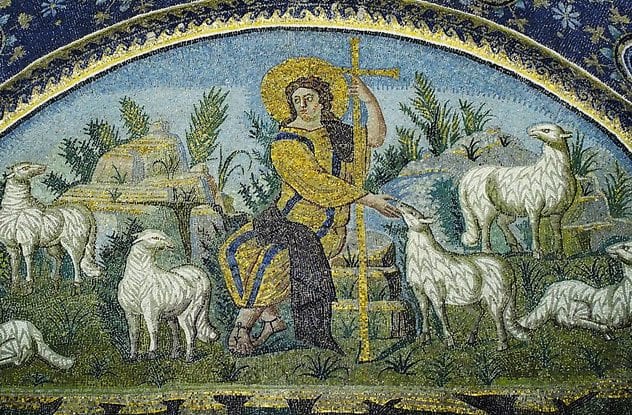 The image of Jesus that comes to us from the Bible is that of a simple countryman, descended from a line of kings but not an earthly king Himself. His relatively humble beginnings have given us the Jesus of unsophisticated dress, often a plain robe. In the Mausoleum of Galla Placidia in Ravenna, there is a mosaic displaying a quite different Christ.

The building, once thought to be the tomb of a Roman empress, was built around 430. Inside is rich decoration. On the ceiling, blue and gold glass tiles depict hundreds of stars leading upward toward a cross. Over the entrance, Jesus is shown as the Good Shepherd. Few shepherds can ever have been so well dressed. Jesus wears the purple and gold of an emperor, not a country bumpkin. He holds an Imperial staff joined to a cross. Clearly this is an attempt to join the political power of an emperor to the divine power of Jesus. 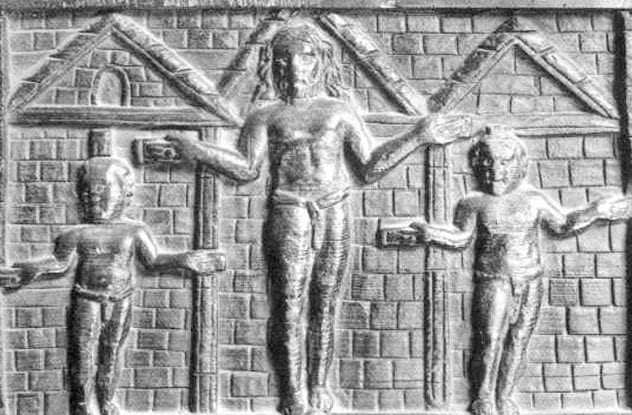 The church of Santa Sabina in Rome was completed in 432. The building stands mostly in its original state, though it was stripped of its sumptuous mosaics. You might expect mosaics to endure longer than wood, but it is the wooden doors that hold one of the earliest images of the crucified Jesus.

The wooden panels of the original fifth-century doors of the church have survived and can still be seen in the church. Carved from cedar wood, the panels show various scenes from the Bible. One of these shows Jesus as a long-haired and bearded man hanging from a cross. While this is now the standard view of Jesus, the contemporaneous Good Shepherd mosaic in Ravenna shows Jesus as a beardless youth. Dating from around 500, the tiny Archbishop’s Chapel in Ravenna shows a Christ standing on the necks of a lion and snake. This violent imagery finds its basis in scripture. Psalm 91:13 tells us that if you love God:

In this mosaic, Jesus is a warrior, wearing armor and cloak. He holds a cross as if it was a weapon. Why might the church require a soldier-Jesus to protect it? The chapel was raised during a period of strife between different Christian sects. The Arians followed one teaching about the Trinity and the Athanasians a different one. Perhaps this Arian chapel is a warning to their enemies of what will come.

7Healing The Bleeding Woman
Catacombs Of Marcellinus And Peter 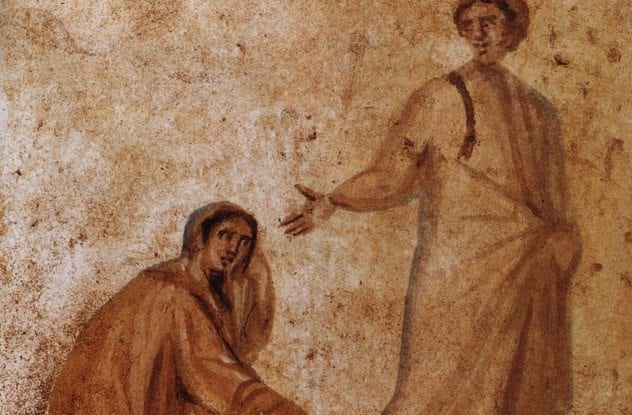 The city of Rome is built on top of a labyrinth of quarries, tunnels, sewers, and catacombs. Hidden in this shadow city lurk many ancient frescoes that would otherwise have been destroyed by time and weather. In the catacombs of saints Marcellinus and Peter, among the thousands of burials, is one of the earliest narrative images of a passage from the Bible.

Mark 5:25–34 tells the story of a woman who has been bleeding for 12 years. She comes to Jesus in a crowd and believes that just by touching His cloak she will be healed. She does, and she is, and Jesus tells her that it is her faith that has saved her. That scene is painted on the walls of the catacombs, which were started in the second or third century.

6Healing Of The Paralytic
Syria 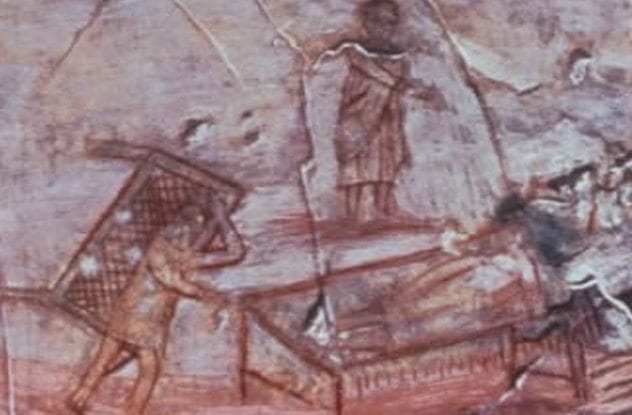 One of the best known stories from the New Testament is Jesus’s healing of the paralyzed man. The man’s friends are so desperate to get him to Jesus that they tear the roof off the house Jesus is in and lower him down inside on a bed. Seeing this, Jesus simply tells the man to “Get up, take your mat and go home.” The man picks up his bed and strolls away.

Dating from around AD 230, this mural was discovered on the wall of a church in Syria. While we might read a cartoon left to right, here the image seems to have the story read right to left in pictures. The man begins on his bed in the right-hand side, Jesus commands him in the middle, and the man walks off with his bed on his back on the left.

5Virgin And Child
Catacomb Of Priscilla 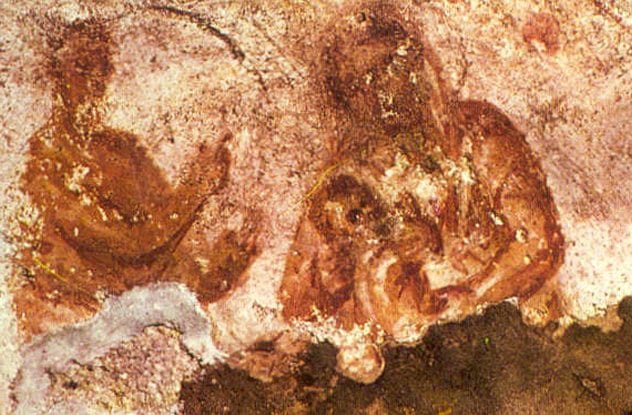 When archaeologists dug into the Catacombs of Priscilla in Rome in the 19th century, they found it a ruin. Two hundred years earlier, the tombs had been ransacked on the orders of the papacy. Sarcophagi had been smashed and mosaics torn down.

No one is entirely sure why this happened. The fragments left are historically valuable, but the paintings on the walls and ceilings, dating from the third century are even more valuable.

The frescoes have proved to be controversial. Many of the paintings show women. Some seem to show women preaching, even in the role of priests. But tucked away in one corner of the tombs is perhaps the oldest image of the Christ child and Mary. Some dispute whether this is Mary and Jesus, but if it is, then it is centuries older than the next depiction of the mother of Jesus.

The Church father Tertullian described how the Romans blamed the Christians for all their troubles in the third century: “They think the Christians the cause of every public disaster, of every affliction with which the people are visited. If the Tiber rises as high as the city walls, if the Nile does not rise or send its waters over the fields, if the heavens give no rain, if there is an earthquake, if there is famine or pestilence, straight away the cry is, ‘Away with the Christians, to the lion!’ ”

This explains why the Christians needed so many underground places to store the remains of their martyrs. The Catacombs of Callixtus were one such place. On the walls is a mural of Jesus as the Good Shepherd from the third century. Here, He is a simple shepherd carrying water and bearing a lamb on his shoulders—representing His care for the innocent and His own role as Lamb of God. 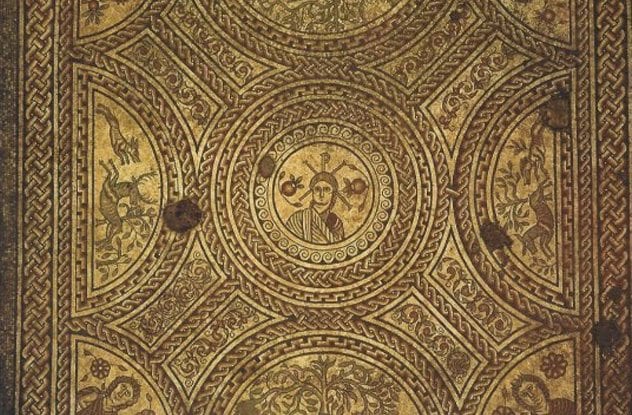 The Hinton St. Mary Mosaic comes from Britain and once belonged to a prominent Roman family of the province. It once covered a dining room floor. The whole mosaic freely mixes Christian and Pagan imagery, as well as scenes of hunting. One portion shows the Greek hero Bellerophon riding the winged horse Pegasus.

In the center is a beardless young man flanked by two pomegranates. Without the symbols behind him, it might be impossible to link Him with Jesus. Behind the man’s head are the Greek letters chi and rho, the first letters of Christ’s name in Greek and a common symbol for Him. The mosaic is thought to date from the early fourth century. 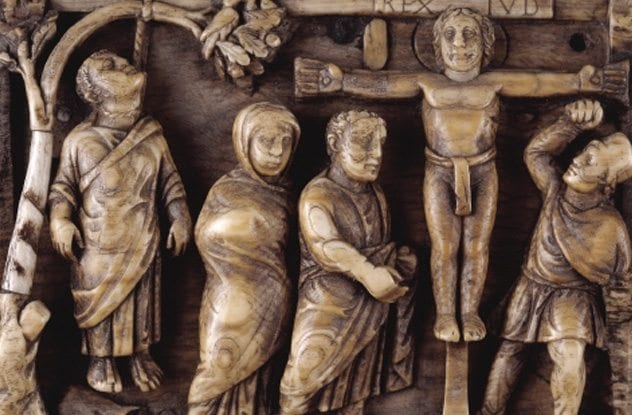 In the British Museum sits one of the earliest depictions of the death of Christ. Carved in ivory, it has three other panels showing the Passion of Christ. Together, they formed the sides of a Roman casket from the fourth century.

Christ is nailed through the palms to a cross. Above His head are carved the words REX IUD(AEORUM) (‘king of the Jews’). To one side, saints Mary and John look on, as on the other Longinus pierces Jesus’s side with a spear.

On a tree hangs the body of Judas. At his feet and spilling from a purse is the money he gained from betraying Jesus. 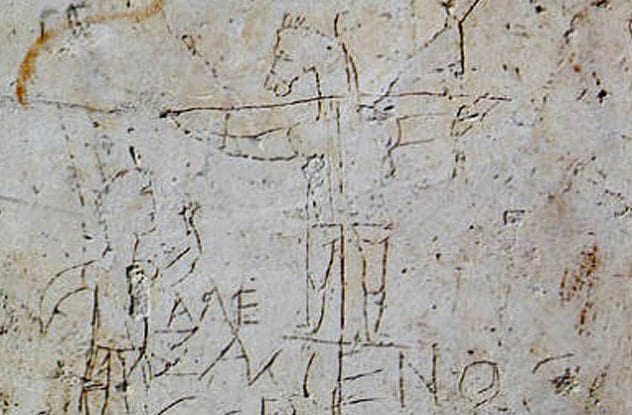 It perhaps says something about human nature that possibly our oldest image of Jesus is from a mocking piece of graffiti. The Alexamenos Graffito is also known as the graffito blasfemo, or blasphemous graffito, for reasons rapidly apparent. The best dating for the graffito is AD 200.

Found carved in plaster in Rome, the image shows a man staring up at a crucified figure. A closer look at the figure on the cross reveals the head of a donkey Underneath is scrawled, in Greek, “Alexamenos worships God.”

It must be remembered crucifixion was a punishment dealt out to the lowest of the low. Even showing that would be an insult. 1 Corinthians 1:23 has St. Paul telling them that “we preach Christ crucified: a stumbling block to Jews and foolishness to Gentiles.” The donkey head was just to reinforce the image.

Ben Gazur is a freelance writer who can be followed on Twitter @BenTheEpicure.