Regular statues of Jesus depict a white, bearded man with his arms stretched upward, to the side, or in front of him. Occasionally, such a sculpture will show a beautiful baby carried by the Virgin Mary.

Although the majority of the statues of Jesus look like these, there are exceptions. Some are so weird that they have been labeled occult symbols. Others are just controversial and depict Jesus in unusual positions. There was also one of a black Jesus, another of a naked Jesus, and one that looks more like Maggie Simpson than Jesus. 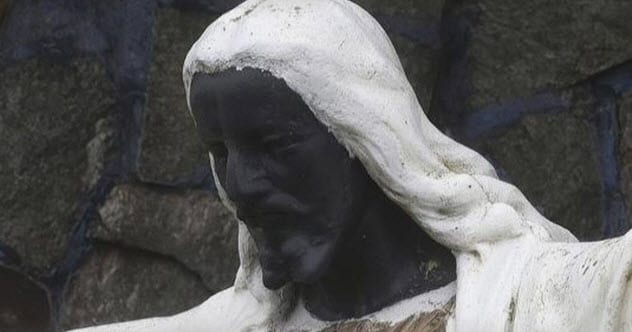 There is a statue of a black Jesus at the Sacred Heart Major Seminary in Detroit. The statue used to be white but was repainted black during the Detroit race riots of 1967.

It was no surprise that the statue was repainted black. Blacks were rioting for increased representation and an end to discrimination at the time. And the seminary was located in a black neighborhood. So the statue quickly became an object of interest.

On July 23, 1967, three men redid the face, hands, and feet of the statue in brown or black. The clothing was left white. The seminary made it white again, but someone repainted it black during the night of September 14, 1967.

The statue has remained black ever since—even during restorations. The act was not considered vandalism because the men did not deface the sculpture. Some believe that it was repainted to signal to black rioters not to destroy the statue.[1] 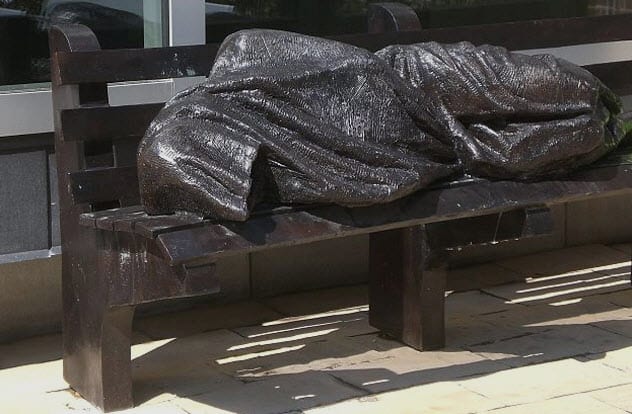 Homeless Jesus refers to several bronze statues depicting a homeless man sleeping on a bench. They were created by artist Timothy Schmalz to highlight the problem of homelessness. The man’s face is covered, but we know he is Jesus because of the nail holes in his feet.

The first Homeless Jesus was installed outside Regis College at the Jesuit School of Theology at the University of Toronto. About 40 more statues have been commissioned and placed in several locations around the world, including the Vatican.

The statues look so real that some uninformed people called 911 thinking that it was a real homeless man sleeping out in the cold. These depictions are so controversial that the city council of Westminster, London, stopped Schmalz from installing one in the city.[2]

8 Christ Of The Abyss 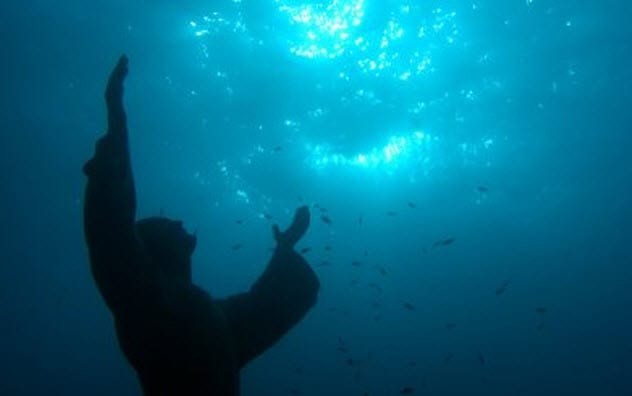 Il Cristo Degli Abissi (“Christ of the Abyss”) refers to three underwater bronze statues of Jesus. All of them were made by Italian artist Guido Galletti. The first was completed in 1954 and installed at San Fruttuoso Bay, Italy.

The second statue was completed in 1961 and placed at St. George’s Harbor, Grenada, in memory of the survivors of the sinking of the Italian ship Bianca C. The vessel had been anchored at the harbor when it sank after a fire.

Galletti created the third statue for Egidio Cressi, an Italian company that makes diving equipment. Egidio Cressi gifted the sculpture to the Underwater Society of America.[3]

All three statues are identical because they were made from the same cast. The original clay positive was missing until 1993 when it was found with its arms missing. The arms were later discovered in a box. Even so, new hands were sculpted for the statue before it was sent to the Italian National Museum of Underwater Activities. 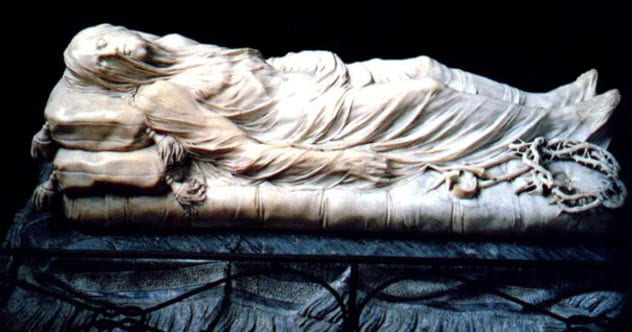 Veiled Christ depicts a dying Jesus lying on a bed and covered with a transparent veil. It is so transparent that Jesus is clearly visible to a person looking at the statue. The sculpture was created by Guiseppe Sanmartino for Prince Raimondo di Sangro. Sanmartino completed it in 1753. It is currently displayed inside Sansevero Chapel in Naples, Italy.

Veiled Christ was controversial at the time it was commissioned and remains so today due to the transparent veil. Most people could not understand how Sanmartino did it. They suspected that the veil was actually created by Prince Raimondo using a secret process he derived from his alchemy experiments.

Raimondo was renowned for his interest in alchemy. He was a very controversial person with equally contentious writings. After Raimondo’s death, the Catholic Church forced his relatives to destroy his scientific writings. However, no alchemy or magic was involved in creating the transparent veil. It is just art. The veil and the body of Jesus are part of a single marble sculpture.[4] 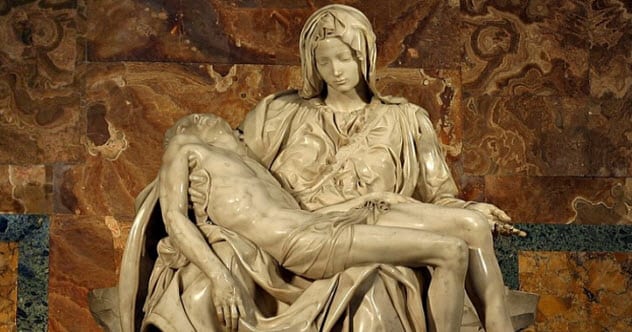 Pieta depicts the Virgin Mary carrying a dying Jesus. It is displayed inside St. Peter’s Basilica in Vatican City. Pieta was completed by Michelangelo in 1498 and was intended for a French cardinal who wanted to put it on his tomb. Michelangelo created the sculpture such that Mary was bigger and younger than Jesus.

Michelangelo said that he created Mary with a childish face because she was a virgin. According to him, virgins did not age because they were “free from desire.” As for size, it was normal for Renaissance statues to make a person unusually large to “balance the art.” In this instance, it would have been odd for a smaller Mary to carry a bigger Jesus, so Mary had to be bigger.

Pieta holds the distinction of being the only sculpture ever signed by Michelangelo. He etched his name into the statue after he heard some men say that it was made by another artist.

Michelangelo was not yet famous and was afraid of someone stealing his work. He later regretted etching his name into it, though.[5] 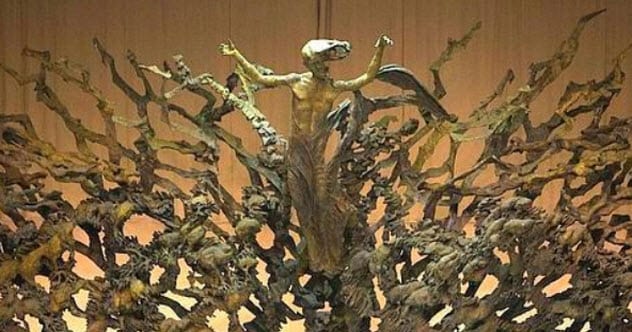 Inside Paul VI Audience Hall in Rome lies a statue of Jesus floating out of a nuclear crater. The bronze-and-copper statue was created by Pericle Fazzini and unveiled in 1971. Fazzini used the statue to depict the reality of our nuclear-armed world and what would happen if a nuclear war ever broke out.[6]

The crater was created over the Garden of Gethsemane, the last place Jesus prayed before he was crucified. However, some think that the statue has other meanings. They do not even believe that the representation is of Jesus. They say that it is Baphomet, a goat-headed deity that frequently pops up in occult symbols. 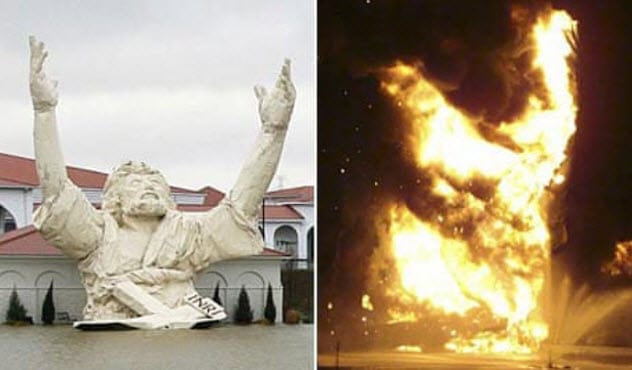 The Kings of Kings was a statue of Jesus that used to be outside Solid Rock Church in Monroe, Ohio. The sculpture was unusual because it showed Jesus from the torso up as if the remaining part of his body was underground. The top of a cross was also visible.

Kings of Kings was called “Touchdown Jesus” because it depicted Jesus lifting his arms toward the sky in the exact way that football officials raise their arms when they want to declare a touchdown. The statue was ruined after it was struck by lightning in June 2010. The lightning started a fire that totally destroyed the plastic foam and fiberglass statue, leaving only its steel frame.[7] 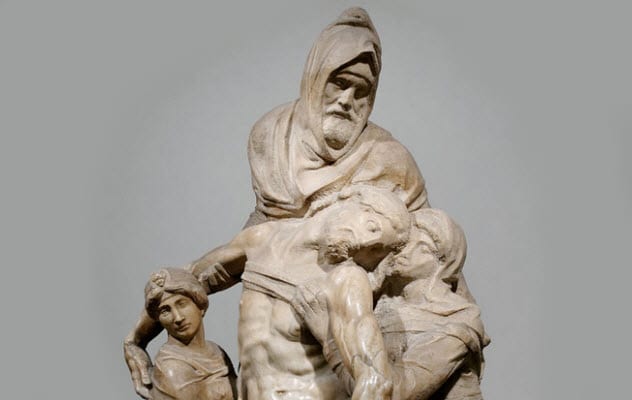 The Deposition depicts Mary Magdalene, the Virgin Mary, and Nicodemus carrying the body of Jesus for embalming. As the original story in the Bible had Nicodemus and Joseph of Arimathea carrying Jesus, some say that Nicodemus was actually Joseph. Although the sculpture was created by Michelangelo, it was completed by his friend Tiberio Calcagni.

Michelangelo started working on the statue in 1550. He stopped in 1555 when he angrily used a hammer to destroy it. No one knows why Michelangelo destroyed the sculpture. He had been using veined marble, which was exceptionally difficult to work with, so he must have become frustrated. It may have also been because his servant, Urbino, kept urging him to complete it.[8]

Others suspect it was because Michelangelo did not want people to think that he followed the more Protestant teachings of Nicodemus when the majority of Italians were Catholic. Michelangelo sold the incomplete statue, and the new owner commissioned Calcagni to complete it. He reattached broken parts and made several other adjustments before completing the statue. However, he never added a new left leg for Jesus.

2 The Stolen Head Of Jesus 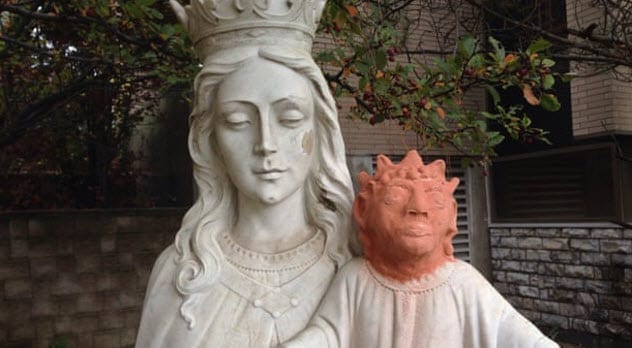 That is not the real name. The possibly nameless statue depicts the Virgin Mary and baby Jesus. It was installed outside Sainte Anne des Pins Catholic Church in Sudbury, Canada. The head of baby Jesus was detachable, and people often removed it. Most of the time, they left it on the floor. That changed in 2015 when someone took the head away.

Artist Heather Wise agreed to create a new head for Jesus. However, she first created a temporary one so that the statue would not look awkward. The temporary head was just so hilarious that it quickly became the butt of jokes. If anything, it alerted more people that the sculpture of Jesus was missing a head. It also made the statue look awkward.[9]

Besides being a different color, the temporary head had spiky hair that looked more like Maggie Simpson than Jesus. However, it created awareness about the missing head, which was promptly returned. The woman who brought it back said that she had seen it in her office but had not known it was stolen. 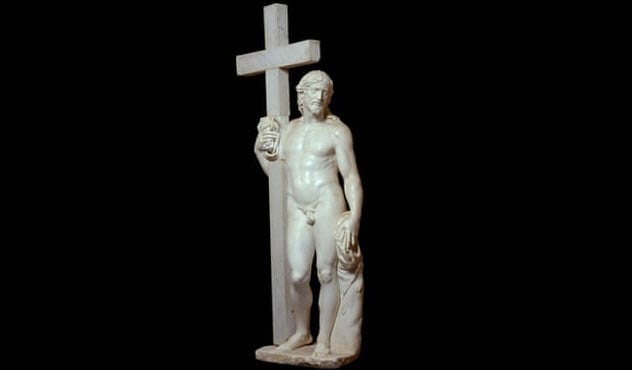 Back to Michelangelo and his habit of sculpting unusual statues of Jesus. Risen Christ depicts a naked Jesus holding a large cross. However, Michelangelo actually made two statues.

He started working on the first one in 1514. But he stopped midway after finding that the marble contained black impurities that would have cut across the cheek. He completed a second one in 1521. Then Michelangelo gave both statues to Metello Vari, who had commissioned the work.

The uncompleted sculpture was forgotten soon after Vari died in 1554. Most people did not know that it was a work of Michelangelo. It was usually dismissed as an incomplete imitation of Michelangelo’s Risen Christ.[10]

The work was finished by another artist in 1644 and taken to San Vincenzo Martire church in Bassano Romano, Italy. The one completed by Michelangelo was kept at Santa Maria Sopra Minerva church where Jesus’s penis was covered with a bronze cloth.

The statue that was finished by another artist probably survives because it was forgotten. It was untouched when Napoleon invaded Bassano Romano in the 18th century and when the Nazis arrived in the area during World War II. When the church was donated in 1941, the new owners left the sculpture alone even though they took other artifacts. The statue was only rediscovered in 1997.