Statues and paintings of Jesus can get predictable. They stare, pray, suffer on the cross, or rest in a manger.

Upon closer inspection, some have bullet holes. Others hide mysterious messages. This being art, controversial interpretations are always going to be there. But one of them, the claim that Jesus was a victim of sexual violence, could have repercussions throughout the Catholic Church. 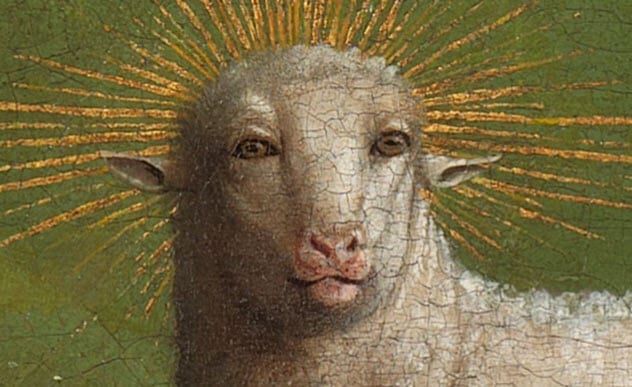 As history has proven, Jesus paintings are prone to botched restorations. When another masterpiece was cleaned and shown to the public in 2020, many thought it had happened again.

The painting was The Adoration of the Mystic Lamb. It was created during the 15th century by two brothers who depicted Jesus as a sheep. Over time, the image turned hazy. A three-year project restored the artwork, and the result was freaky.

The lamb’s face was very humanoid. Although it disturbed visitors and even shocked the experts, this was not another screwup. During 1550, two different artists had changed the animal’s appearance to look more sheepish. But the original version was designed so that the humanlike face gazed almost directly at the viewer. Some critics did not appreciate the look and described the eyes as “overly confrontational.”[1]

9 Lost Masterpiece Found In A Kitchen 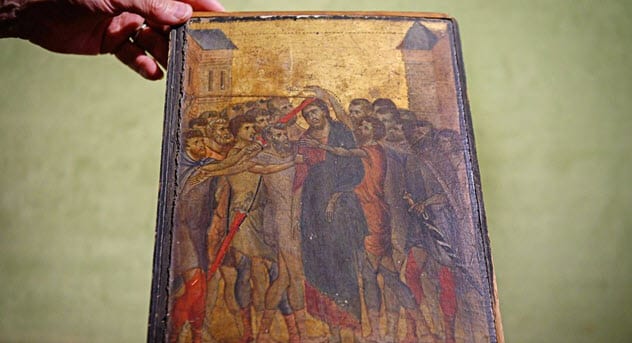 In 2019, a French woman spring-cleaned before moving. Among the things she no longer wanted was a painting. The family heirloom was hanging above the kitchen hot plate and was rather depressing. It showed Jesus being shoved around by a crowd. Perhaps warned by instinct, she had it appraised. The decision made her $26.8 million richer.

The work belonged to 13th-century Renaissance master Cimabue. He had created it as part of a multi-paneled altarpiece. The Frenchwoman’s painting was called The Mocking of Christ and was the third panel to be found.[2]

When the panel was slotted into place, the woodworm damage on the back matched the scars of the second painting in the series. Coincidentally, this was also the third piece to be discovered overall. There could be as many as five panels still out there. Whoever finds them can visit an auctioneer and retire with millions.

8 John The Baptist Was Once Painted Over Jesus 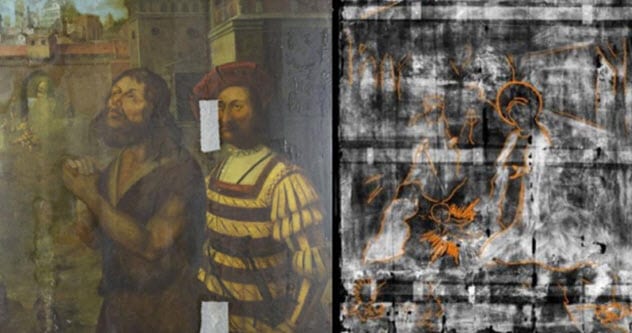 In the scheme of things, images of Christ might be seen as more important than those of John the Baptist. One 16th-century artist disagreed. His name is lost to time. For a long time, the person’s decision to erase Jesus in favor of John also went undiscovered.

However, the unknown artist created a masterpiece. The painting showed John clasping his hands together in prayer on the day of his beheading. Time did not treat the work well. In 2019, Northumbria University scanned the damaged canvas to start the restoration process.[3]

When the X-ray was examined, the original painting emerged. It was a nativity scene. Nestled in a manger, Jesus was surrounded by an angel, a wise man, and possibly a shepherd. A stable-like building stood in the background.

The discovery added more questions to the painting’s murky past. The year that the nativity scene was painted and by whom remains unclear. Why it was covered up with John the Baptist is another head-scratcher that will probably never be answered.

7 A Black Jesus Was Shot 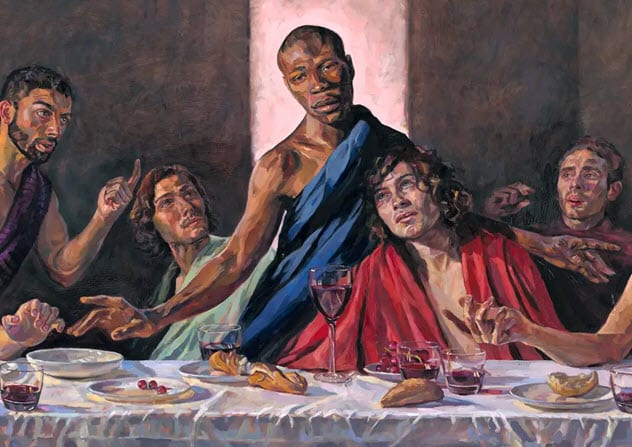 In 2019, a painting was being prepared for an exhibition in Sheffield. At one point, artist Lorna May Wadsworth saw a bullet hole in the canvas. The painting was based on The Last Supper, and real models were used by the artist to depict Jesus and his followers. For Jesus, Wadsworth used the Jamaican-born Tafari Hinds.

Experts identified the weapon as an air rifle. As the shot had been aimed at the image of Hinds, Wadsworth was asked if she thought the act was racially motivated. She replied that it was “too horrible to contemplate.”[4]

Indeed, the whole thing upset her so badly that she almost pulled the painting from the exhibition. Only the realization that the vandal probably rooted for such a move stopped her.

Ironically, the bullet passed through Jesus’s right side where he had received the famous spear wound.

In 2017, a wooden statue arrived in Madrid to be restored. The life-size Jesus had been carved during the 18th century. Back in the day, the larger pieces of religious art were hollow. This made them easier to move and less prone to cracking. However, this Jesus had cracked around the buttocks. During the restoration, a team member was surprised to find that the statue’s bum was a time capsule.

Somebody had stuffed two scrolls inside. In a careful hand, the writer named himself as Joaquin Minguez. He was the prior of the church where the statue had been kept in 1777. Minguez talked about everyday stuff. People had short fevers. They hunted and grew crops. Earthquakes shook the land. Curiously, Minguez also mentioned that the monks loved ball games and playing cards.[5]

Most likely, Minguez created the scrolls for future generations. This way, they could glimpse the past and see his world. To honor the prior’s intentions, the team replaced the scrolls inside the statue. They also inserted their own letter that describes modern times. 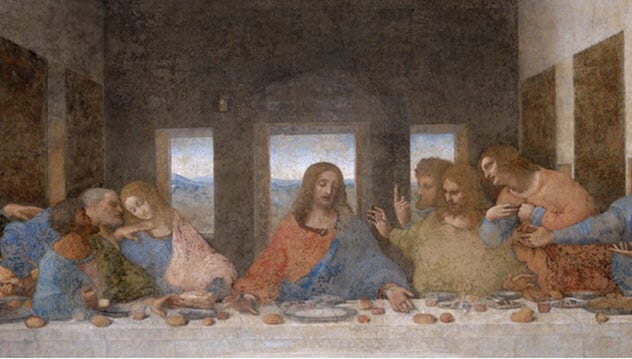 The Last Supper is one of the world’s most famous paintings. But despite being the center of movies, books, and countless studies, one mystery remains. What menu did Leonardo da Vinci have in mind when he painted his masterpiece? In 2016, a study revealed the likeliest menu.

Archaeologists dug deep into the Palestine cuisine of the time. They took into account that the dinner was informal and that Jesus adhered to Jewish customs. For good measure, the study drew on the Bible, Jewish scripts, historical records, and the eating habits of the first century AD.

As it turned out, da Vinci did not know what he was doing. He was a superb artist but was too caught up in painting the Eucharistic ritual to put the right food on the table.

Indeed, the table seems empty for 13 people about to chow down. The only plates contain insubstantial amounts of food. The real dinner would have included wine on the table. Unleavened bread, lamb, and a bean stew would have provided enough substance while olives, fish sauce, and dates would have added variety.[6] 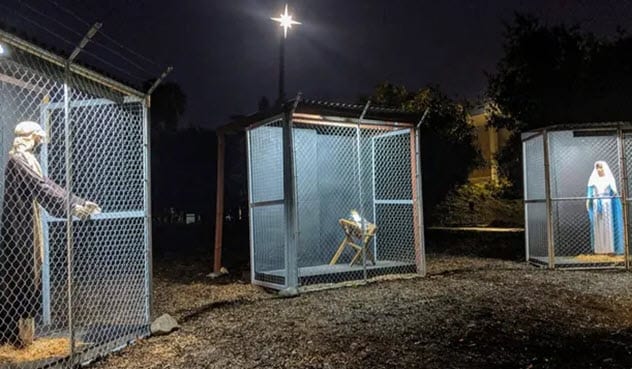 During the festive season in 2019, many dusted off their nativity figures and arranged them in the traditional way. The Claremont United Methodist Church did something different. Mary, Joseph, and Jesus were separated into individual cages.

Nothing about the display pointed a finger directly at US President Donald Trump’s immigration policies, but the message was clear. The Holy Family had also been immigrants. Had they crossed the US-Mexico border today, they might have been taken to different detention centers.[7]

The decision to use the nativity scene as a silent protest was inspired by immigrant children. According to the American Civil Liberties Union, over 5,000 children had been separated from their parents at the US-Mexico border from mid-2017 to late 2019.

The community, both online and local, had mixed reactions. Some were insulted or angry. But a lot of people appreciated the point that the church was trying to make. No matter what, families should not be forced apart.

3 Mystery Of The Sphere 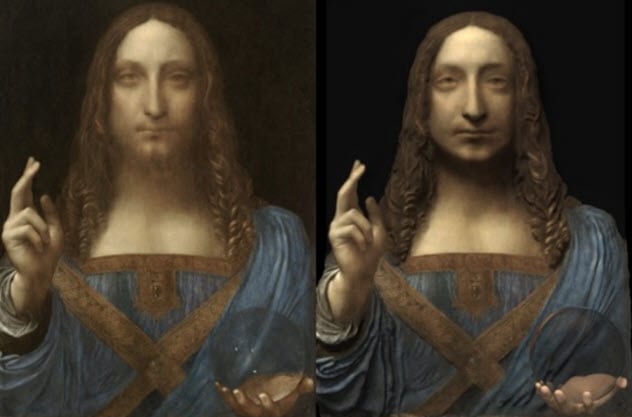 Leonardo da Vinci painted Salvator Mundi around AD 1500. The portrait showed Jesus holding a glass orb in his hand. For decades, experts were confused. The sphere lacked certain things. For one, the glass did not distort anything. The robes directly behind the ball looked the same as the rest of Christ’s clothing. In addition, the curved surface did not reflect light as might be expected.

Da Vinci was no fool. Taking liberties with the Last Supper’s menu can be excused. Perhaps the food was symbolic, or he lacked the resources to do research. But an orb was not something that he would have bumbled. There was a reason why this object did not distort or reflect anything.

Scholars debated their options. Some said that the master had deliberately painted the orb wrong. Other theories involved a hollow object or rock crystal. In 2020, the University of California found the answer. A 3-D computer rendering of the orb revealed that the hollow sphere was a match.[8]

Far from making a blooper, the results once again proved that da Vinci was a talented scientist who perfectly understood optical properties in this case.

2 Da Vinci Struggled With A Masterpiece 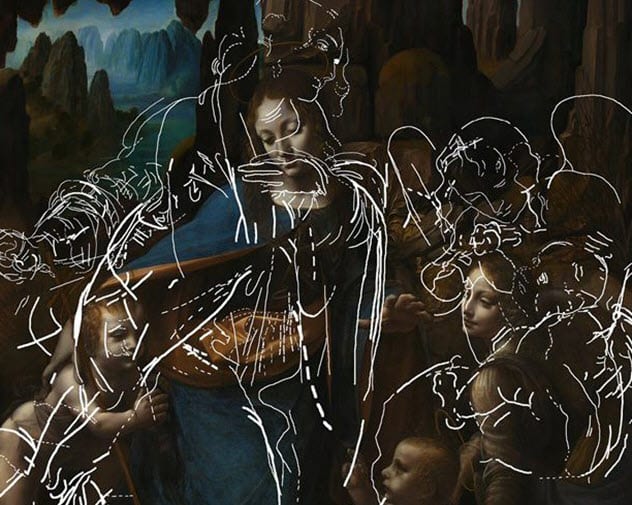 Given Leonardo da Vinci’s reputation, it is hard to imagine that he wrestled with his paintings. In 2019, a scan proved that even legendary masters have their bad days. The painting involved was the world-famous The Virgin of the Rocks. The artwork shows Mary and baby Jesus being adored by an angel and John the Baptist.

True to da Vinci, the painting is a masterpiece. But when a London gallery scanned the surface with X-rays, a very different scene emerged. The garbled figures showed da Vinci’s indecision. He had changed their positions twice before he was satisfied. Had he chosen one of these, today’s Virgin would be very different.

In the earliest version, Christ and the angel were placed higher. The angel also holds Him in a much tighter embrace. Then da Vinci changed everything. This second attempt was close to the final painting, but there were significant differences. The angel had more hair, and Jesus looked at a different spot in the painting.[9] 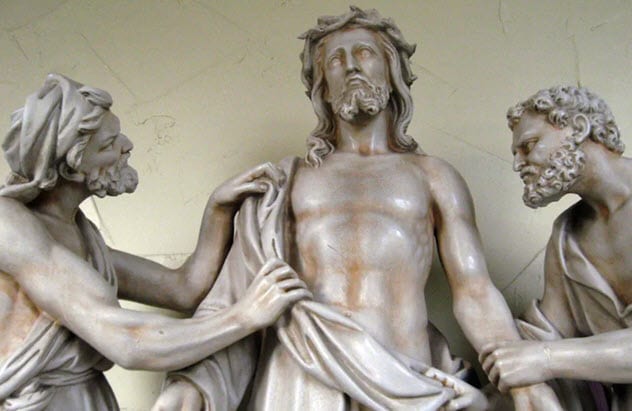 Sexual abuse has many faces. Some argue that forcibly stripping somebody naked also counts, even when nothing else happens. When researchers looked at crucifixion art, most showed that Jesus was humiliated in this way. The artists did not follow a baseless notion. The Romans really did turn prisoners out naked before executing them.

The researchers needed this connection between stripping and abuse to deal with a crisis. In the past, Catholic leaders had exhibited a lackluster response to survivors of sexual violence—especially when priests were the offenders. The struggle is ongoing. But if Jesus can be recognized as a victim, it could change the way that the Church deals with assaults.

During the 2019 study, male survivors were interviewed. Those who have never experienced this kind of trauma might easily dismiss the idea of stripping as sexual violence. After all, it’s not rape or even fondling.[10]

In fact, when the victims were asked if forced nudity could be considered as abuse and Jesus as a victim, most were surprised at first. However, they eventually agreed and said that recognizing Jesus’s plight would give the Church more solidarity with survivors.

For more lists like this, check out Top 10 Relics of Jesus Christ and 10 Unsolved Mysteries That Confound The Art World.