Every generation faces a new “zombie drug.” From the 18th-century English gin craze to the crack epidemic of the 1980s, addicts are frequently likened to the walking dead. This highly politically charged comparison results from overzealous law enforcement and sensationalistic media demonizing substance users. Often, there are political motives behind the designation. This rhetoric is confusing, as there truly are terrifying chemicals that can turn humans into puppets devoid of free will, and chemists produce new drugs every day with the potential to turn their users into “zombies.” 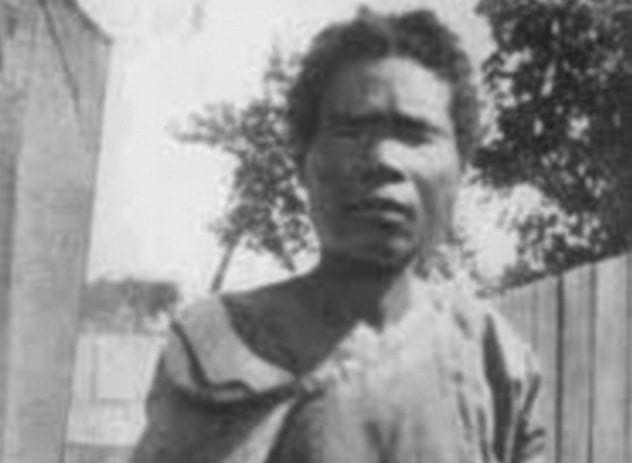 In the early 1980s, ethnobotanist Wade Davis traveled to Haiti to find the secret behind coupe poudre—zombie powder. He interviewed Voodoo practitioners and collected samples from around the island. Analysis revealed that seven of the eight samples shared ingredients. These were cane toad poison, tree frog irritant secretions, and tetrodotoxin (puffer fish neurotoxin). Davis concluded that tetrodotoxin was the secret to coupe poudre.

Reports abound of people going into suspended comas following consumption of tetrodotoxin, which is produced in liver and ovaries of puffer fish. Voodoo doctors would administer the toxin to a victim, who would be declared dead and buried before being disinterred by the doctor and revived. The tree frog irritant causes skin abrasions, allowing the tetrodotoxin to enter the bloodstream. According to Davis’s research, zombification was reserved as a punishment for those who violated the laws of Bizango societies formed by escaped slaves. 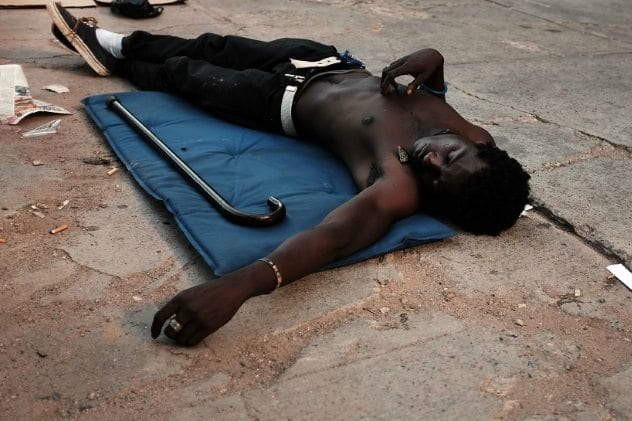 In 2015, Brooklyn police were called to the subway station at the corner of Myrtle Avenue and Broadway to respond to a horde of “zombies.” Multiple individuals were moving mechanically in a trance-like state, moaning and groaning, with lifeless eyes. A blood and urine screen of the eight men revealed that they were under the influence of a synthetic cannabinoid 85 times more potent than marijuana.

In 2009, Pharmaceutical giant Pfizer patented AMB-FUBINACA, which is now sold under the name “AK-47 24 Karat Gold.” This designer drug alters the chemical composition of plant-based THC, marijuana’s primary intoxicant. AMB-FUBINACA is 50 times stronger than the first generation of synthetic cannabinoids known as “spice” or “K2.” The substance is produced primarily in labs in China and is available for purchase on the dark web. One kilogram costs between $1,950 and $38,000 and can be administered over 15,625 doses. A dealer can potentially net $500,000. 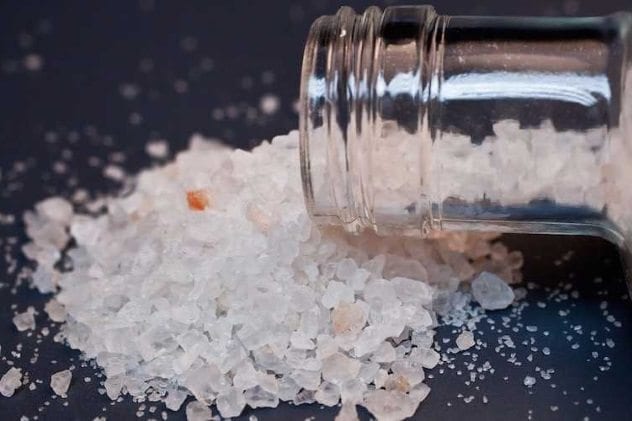 Flakka, or “gravel,” is a highly addictive designer drug. Its technical name is alpha-pyrrolidinopentiophenone, or alpha-PVP. Originally synthesized in the 1960s, these foul-smelling white or pink crystals can be eaten, snorted, smoked, injected, or vaped. These “second-generation bath salts” mimic the effect of cocaine and meth at a fraction of the cost. Flakka is ten times stronger than cocaine, and its stimulating effects can last for days.

Flakka spikes body temperature, leading to kidney failure and even death. Its most terrifying side effect might be what is referred to as “excited delirium.” This condition includes paranoia, hallucinations, and superhuman strength. Flakka has been tied, correctly or incorrectly, to shocking acts of violence, including two cannibal attacks in Florida, leading the press to dub flakka a zombie drug. In 2014, the DEA placed a temporary ban on alpha-PVP. Drug chemists will soon skirt the law by altering its chemical structure. 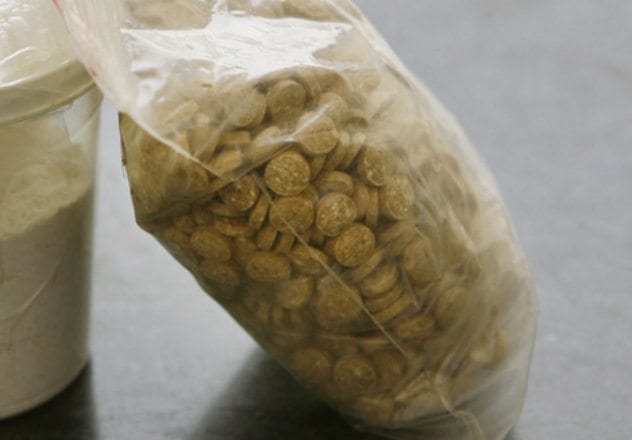 Captagon is the drug of choice for ISIS militants in Syria’s civil war. Some fear it is creating an army of “zombie jihadists.” This amphetamine-based substance obliterates fear, empathy, pain, and fatigue. According to proponents, it gives you energy, enhances strength, and increases alertness. In small doses, it keeps you up for 48 hours and sharpens senses. Large doses cause paranoia, violence, and a thirst for slaughter. According to some reports, the terrorists who carried out the attack in the Paris nightclub were under the influence of captagon.

Fennethylline is the drug’s scientific name. There are rumors of some individuals taking up to 30 or 40 pills at a single time. Many aren’t sure that the reports about the zombie-inducing nature of this “inferior speed” are accurate. They suggest the placebo effect, religious fanaticism, and media sensationalism may be more reasonable explanations and that an army of zombie jihadists is unlikely. Nevertheless, battlefield users of captagon relish its ability to eliminate concern for their lives or the lives of others. 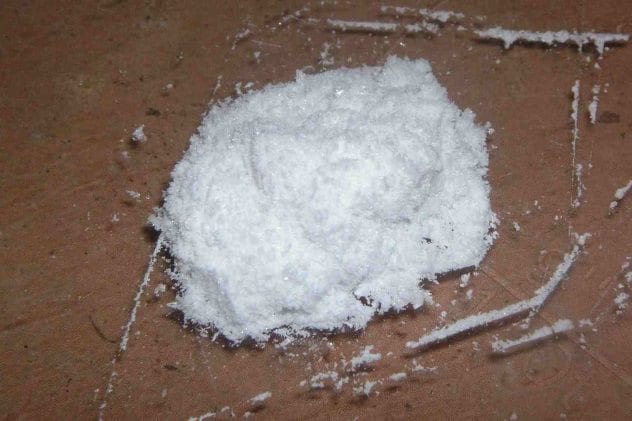 In June 2015, Chinese police announced the seizure of 1.8 tons of a zombie drug in Xiamen. Methcathinone is a cheap, highly addictive stimulant known to turn users violent. Police described it as a “flesh-eating drug that makes people act like zombies.” Also known as “cat,” the drug remains largely unknown in the West. Synthesis requires only ephedrine from decongestants, paint thinner, and sulfuric acid. As an added bonus, the process smells like pistachio ice cream.

Ease of manufacture and low price are spreading the drug throughout South Africa. It produces powerful stimulation and euphoria at a fraction of the cost of cocaine. Cat was originally derived from khat, a stimulant leaf chewed in the Horn of Africa and the Arabian Peninsula. In 1928, German chemists first synthesized khat. It became a popular antidepressant in the USSR throughout the 1930s and 1940s. However, it was banned due to frequent misuse. 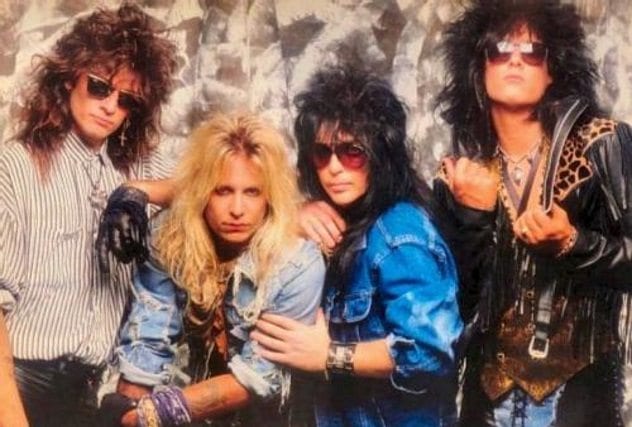 Zombie dust is a mixture of Halcion and cocaine. Also known as triazolam, Halcion is a powerful sedative. Initially patented in 1970s, it was engineered to treat severe insomnia. The pairing with a potent stimulant like cocaine creates a drug cocktail that, in the words of Motley Crue drummer Tommy Lee, “keeps the body awake but shuts off the brain.” During the band’s 1987 Girls, Girls, Girls tour, zombie dust became a key component of the Crue’s drug diet.

The tour was a fiasco—and zombie dust played a major part in the debacle. Nikki Sixx suffered a near-fatal overdose. During the tour, Motley Crue’s tour bus was followed by drug supplier in an exotic Excalibur sports car with a license plate that read “DEALER.” Ultimately, the record label pulled the plug before the band hit Europe. They were lucky to emerge from their tango with zombie dust alive. 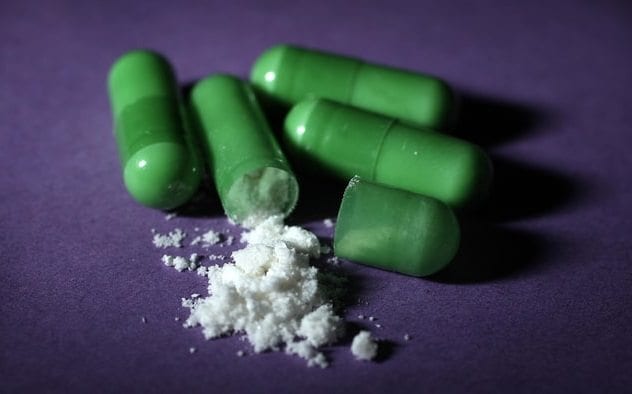 Mephedrone, or “meow meow,” is ravaging India. According to police, 80 percent of Mumbai’s addicts are dependent on the white powder. If you want to know who is on the substance, look for “zombies.” Some describe users as “pale, thin, sick people” who look “dead on their feet.”

At about $15 per gram, meow meow is roughly one-sixth the price of cocaine. It can be snorted or swallowed, providing hours of energy, euphoria, and increased sex drive. Users lose weight and suffer breakdowns and hallucinations. The crash is awful, and suicidal thoughts are common. Many users describe feeling like zombies and experiencing vivid hallucinations of dead people and demons.

Meow Meow was legal in India until 2015. Israel banned it in 2008, and Europe did likewise in 2010. In 2013, there was an account of a British meow meow user who stabbed his mother and then severed his penis with the same knife. 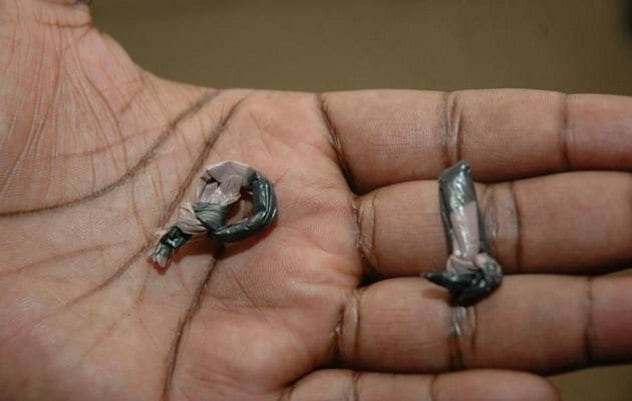 Nyaope, or “whoonga,” is a South Africa scourge. This cocktail of heroin, rat poison, detergent, and HIV antiretroviral medication is leading to an epidemic of drug “zombies.” The cheap concoction emerged in urban centers but has now penetrated every corner of the country. Users are frequently likened to the walking dead. All they can think about is getting more of the drug. Residents of many communities are now living in terror.

Nyaope use is also a major threat to HIV treatment in South Africa. Users are choosing to smoke their medicine for the intoxicating effect, rather than managing their condition. Nyaope use invariably damages a user’s immune system, exacerbating HIV. Furthermore, the drug encourages irresponsible sexual behavior, which could further spread the disease. Bags of nyaope sell for between $3 and $4. The high is potent and short-lived, causing the user to constantly seek more. 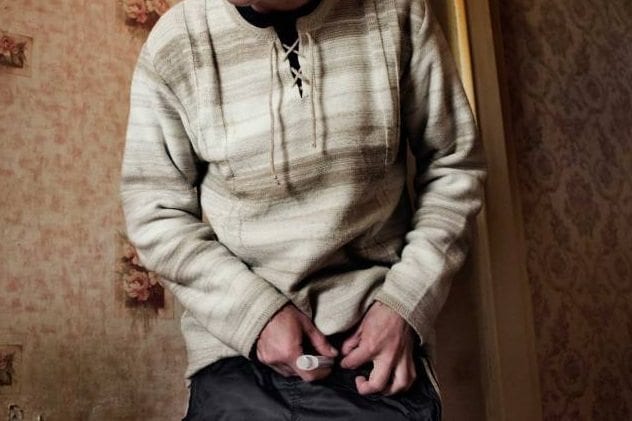 In the 1990s, doctors in the Russian Far East and Siberia saw a wave of patients with patches of black flesh that resembled crocodile skin. This was the result of “krokodil,” a chemical concoction meant to mimic the effects of heroin. The intoxicant, which eats you from the inside out, soon earned the nickname “zombie drug.” By 2011, Russia and Ukraine had over 120,000 krokodil addicts.

Everything required to produce krokodil (aka desomorphine) is available at a local pharmacy. The active ingredient is codeine, an opiate found in many cough suppressants. The codeine is mixed with hydrochloric acid, paint thinner, and red phosphorus from match tops. The foul-smelling yellow liquid sells for a fraction of heroin’s cost. Injection sites rapidly necrotize, occasionally tumbling off the bone in chunks. In 2013, a Missouri man’s finger fell off after being used as a krokodil injection site. 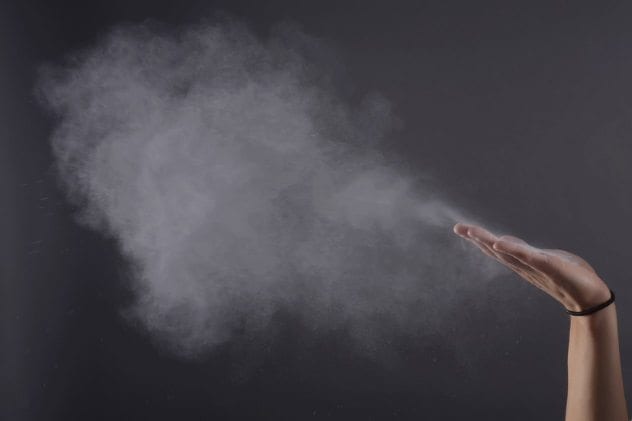 Scopolamine may be the scariest drug in the world. Derived from the Colombian borrachero tree, “Devil’s breath” turns people into “zombies” and renders them incapable of forming memories. This odorless powder can be blown into targets’ faces, obliterating their free will. Tasteless, it is often slipped into alcoholic drinks. Criminals are quick to exploit its potential to turn victims into puppets who can easily be convinced to hand over their keys or empty their bank accounts.

Devil’s breath blocks certain neurotransmitters, turning off the ability to recall and making people open to suggestion. The drug was traditionally used to lure the wives of deceased leaders to graves, where they would be buried alive. Joseph Mengele, the Nazi “Angel of Death,” frequently used scopolamine on his experimental subjects. The CIA employed it as a truth serum during Cold War interrogations. Scopolamine is still used to treat Parkinson’s tremors and relieve motion sickness.