Hysterical witch-hunting spread from Europe to the UK in 1590. James VI of Scotland, later to become James I of England, was the most notable royal witch-hunter. He even published Daemonologie (literally, the science of demons) to inflame the passion of witch-hunting zealots. James described witchcraft as “high treason against God”, which meant that all manner of horrors were justified in wringing confessions from the accused.[1] Many of the precepts that defined the Salem witch trials a century later, were forged in the flames of maybe 4000 witches executed in the relatively tiny country of Scotland.

It seemed that almost any testimony or evidence, however absurd, could be used to convict those considered unpleasant in society. The following are ten of the most incredulous reasons to be condemned as a witch and sentenced to death.

We start our witch-hunt in the small village of Milton in Bedfordshire, the year is 1613. Two horses pulling a cart of corn to marked were spooked on the road by a black pig. The sow was said to have spun around in the road, and the horses bolted. Servants managed to catch and calm the animals, but on their return the same thing happened! The sow was seen later entering the house where Mother and Mary Sutton lived. Gossip spread quickly, reaching Enger, the landowner. His 7 year old son took it upon himself to throw stones at Mary calling her a witch. Days later the boy died.

Enger blamed Mary and her mother and decided to prove her guilt by swimming. First she was dunked in the dam with a rope around her waist and only sank slightly. Not satisfied with this they tied her thumbs to opposite big toes and swam her a second time. She span around as if caught in a whirlpool and floated[2] – this proved she was indeed a witch. If we turn a woman into a wheel she’s bound to spin like a wheel! Mother and Mary were found guilty of witchcraft and hanged on 7th April 1613. 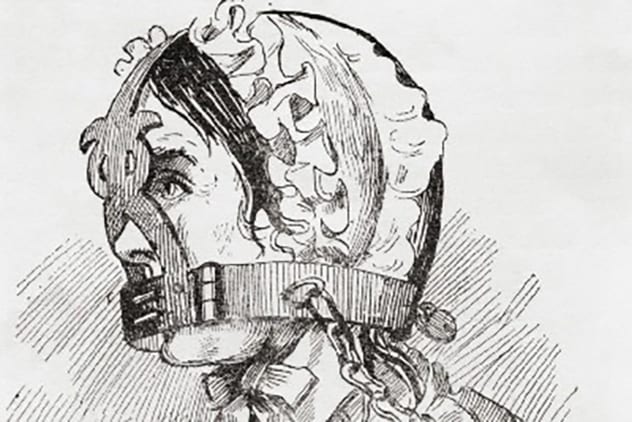 Agnes Sampson was a well respected healer and midwife. But in 1592 she became embroiled in the witch-hunt of North Berwick. The return voyage of James VI with his new Danish wife was beset with storms. These were attributed too witchcraft and conspiracy with the devil to assassinate the king.

Torture and sleep depravation were used to extract confession. Sampson was restrained with an instrument called a witch’s bridle: four prongs placed in the mouth, then attached to a device fastened to the wall.[3] Agnes was one of around 70 people who confessed to witchcraft. (Anyone who’s had a brace fitted can understand that you will say anything to make it stop). She was strangled to death and her body burned. 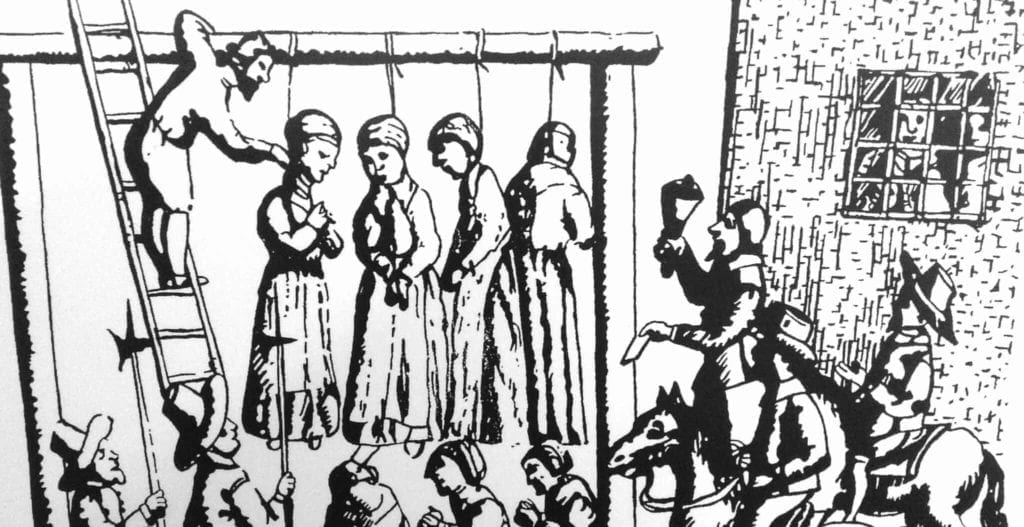 Imagine next time your child hates you for limiting their Xbox time, if they had the power to convict you to your death. That’s exactly how 10 people in Pendle, Lancashire met their fate in 1612. Jennet Device lived with her mother Elizabeth, grandmother Demike, older sister Alizon and brother James. Demike was not liked by the villagers not least for her unfortunate appearance of one eye high, one low, looking in different directions. So when Alizon cursed a pedlar who then collapsed, there were many eager fingers pointing at her and Demike.

Jennet Device entered the court where her grandmother Demike and sister Alizon stood accused of witchcraft. Her mother Elizabeth screamed out at Jennet bringing the little girl to tears. Jennet demanded her mother be removed. She then climbed the table and delivered a calm and convincing testimony. “My mother is a witch and that I know to be true. I have seen her spirit in the likeness of a brown dog, which she called Ball”[4].
The court believed her and convicted her whole family and many of the neighbors of causing death by witchcraft. The day after they were hanged at Gallows Hill. 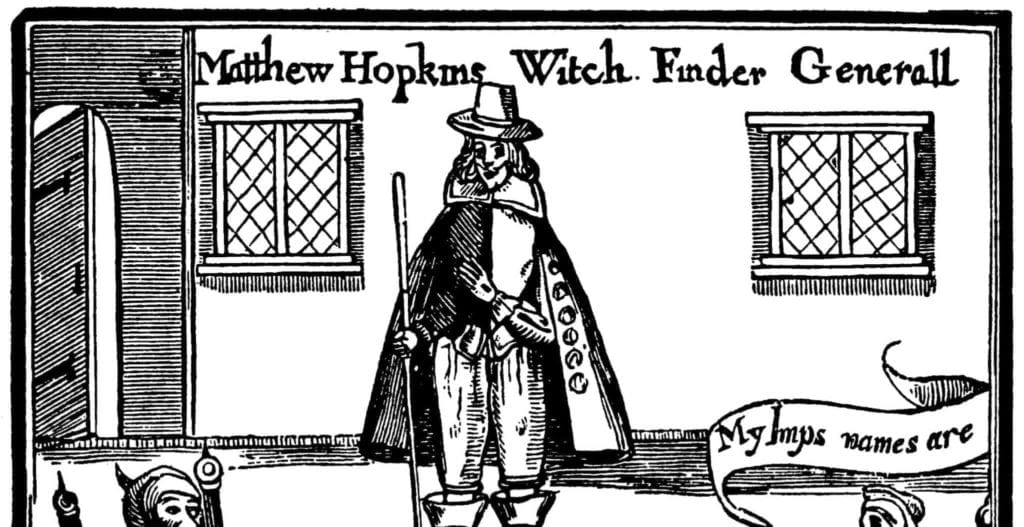 There is a heart carved above a window of number 17 Tuesday Market Place, Kings Lynn. This is the place where the heart of Margaret Read struck the wall after bursting from her chest at the moment of death by burning. The heart then beat its way to the nearby River Ouse and sank amidst the wildly bubbling water. Margaret had been convicted as a witch.

In this same part of East Anglia around 1646, some 60 years later, Matthew Hopkins the Witchfinder General[5] was paid handsomely to clear the towns of witches. Along with torture and sleep depravation, Hopkins also used a spike to test any scar or nipple to see if it was immune to pain. This would indicate the person had suckled the devil. The test was however grossly unfair as the 3 inch needle actually retracted into the spring-loaded handle under pressure. How ironic that a heartless charlatan was paid £20 (at a time when the average workers wage was 2 pence) for condemning the poor – we wouldn’t let that happen nowadays would we! 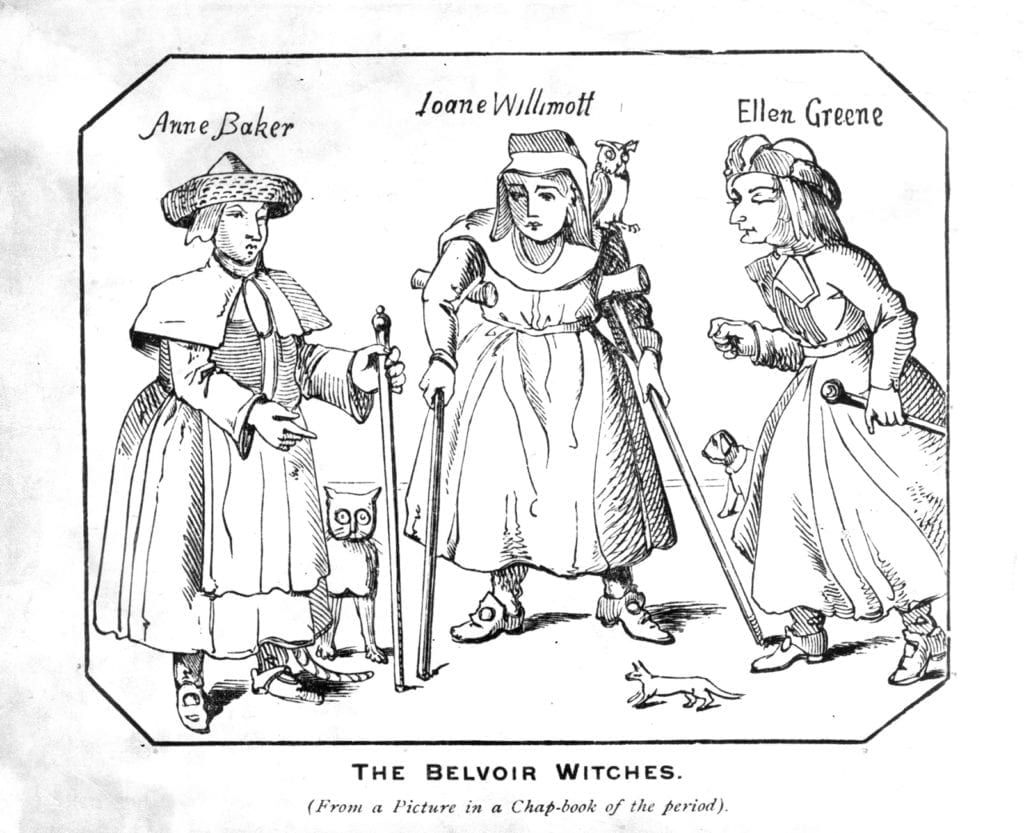 We all make judgements of people based on the kind of pet they have, and some owners even look like their pets. But what if your pet is a black cat named Rutterkin, this kind of familiar could get you the label of being a witch. And so it was that the witches of Belvoir in 1690 were convicted for consorting with familiars.

Joan Flower and her two daughters, Margaret and Philippa were employed at Belvoir Castle, until Margaret was dismissed for stealing. Not long after the whole family became sick and the Earl’s eldest son Henry died. The Earl and Countess were convinced that the three women were to blame, and had them taken to Lincoln jail. Joan would not confess and demanded bread and butter be brought so that if she were not innocent she would choke on it. After one mouthful she dropped dead! At which point her daughters quickly confessed to witchcraft involving incantations and the familiar Rutterkin. They were convicted and hanged.[6] We would suggest a dog for your next pet! 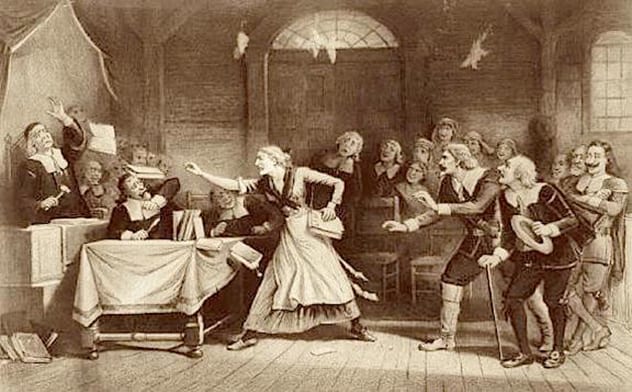 On a cold night in Cork, Ireland, an old woman named Florence Newton begged for a piece of bread at the home of John Pyne. She was refused and sent on her way by the housemaid Mary Longdon. A time later Florence caught up with Mary carrying a pail of clothes for washing, she threw the pail from her head and kissed her violently, saying “Mary, I pray thee, let thee and I be friends; for I bear thee no ill will.”[7]

Mary soon after experienced fits and trances, even vomited up needles, pins, horse-nails, wool and straw. Newton was brought to trial for witchcraft. One of the tests she had to perform was reciting the Lord’s prayer which she struggled to do. Her jailor Davy Jones helped her to learn the prayer, and in gratitude she kissed his hand. A few weeks later Davy died, cursing the kiss.
Records of the outcome are lost, but it’s likely she was sentenced to death. 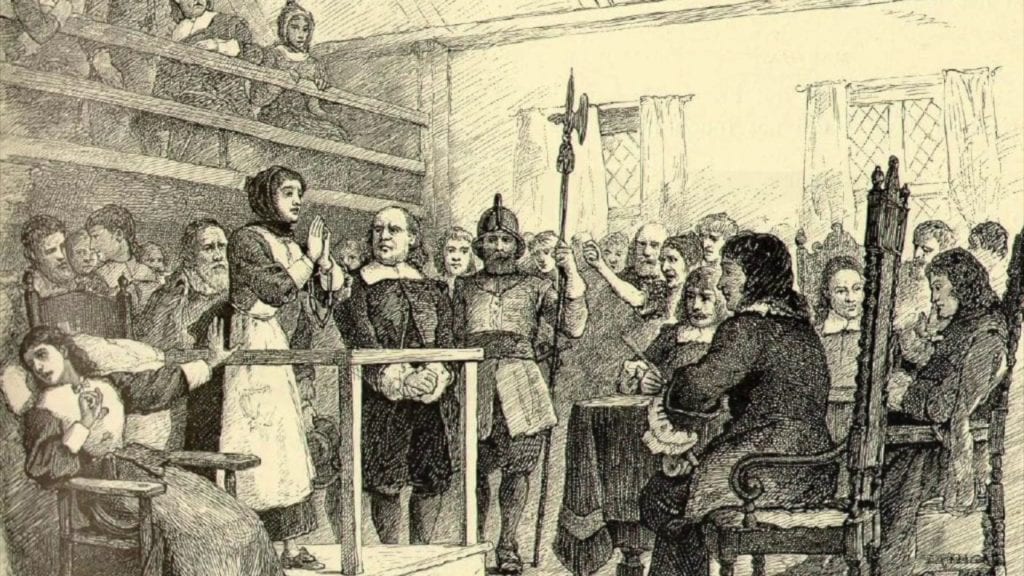 The last witch condemned to death in England, in 1712, was Jane Wenham, the witch of Walkern. Once again inability to recite the Lord’s prayer was used against her. She supposedly struggled to speak the words “forgive us our trespasses” and “lead us not into temptation” during her interrogation.[8] Her accusers also pricked her with a pin up to the head, but instead of drawing blood only a watery liquid was produced. This was a sure sign of guilt.

Attitudes were beginning to change and the judge John Powell was particularly skeptical to accounts of witchery. He was sympathetic to the old woman, dismissing accusations of flying with the assertion that there’s no law against that. The jury still found Jane guilty of witchcraft which carried the sentence of death. However Powell suspended the sentence and in time Jane may have been granted a royal pardon from Queen Anne herself. 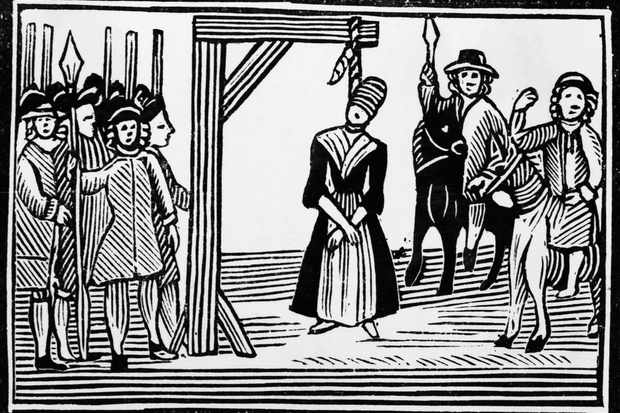 If you thought you had heard the most absurd tests of witch craft already, how about conviction by roof tile! It was 1586 in Faversham, Kent, when Sarah Cooke’s daughter Jane fell ill. She was instructed to take a tile from the roof of the woman she suspected of being responsible. This tile was to be placed in the fire where it would ‘sparkle and fly round the cradle’. The worried mother took a tile from her neighbor Joan Cason, and the ritual proved positive. To further compound her guilt, a visit by Joan to enquire into the child’s health led to disastrous consequences. Jane died just a few hours after looking Joan in the face.

The jury at her trial attempted to show leniency, acquitting her of murder and only convicting her of conjuring spirits. However a lawyer who was present quibbled the charge of conjuring spirits and Joan was hanged anyway three days later.[9] Shouldn’t the roofers have been charged for using sub-standard tiles though?

2 Too brave to be a mere woman 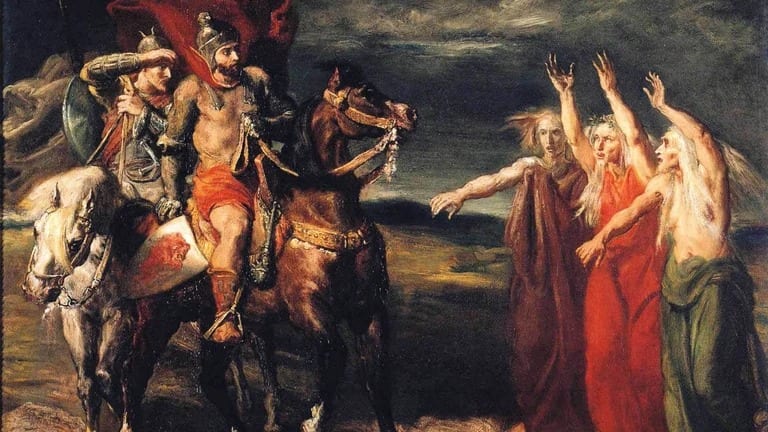 Janet Forsyth was a woman with a talent for predicting the weather. But in 1627 this would not mean a glamorous TV career! One morning after a premonition she pleaded with her sweetheart Benjamin Garrioch, not to go to sea. The fisherman however set out despite her warning. A thick fog descended and all were lost. Janet was branded a witch and spent her days increasingly isolated.

Years later a ship was spotted in trouble off Westray. Janet rallied the village for support to go to their aid, however they were more interested in the ship breaking up and leaving its cargo on the beach. Undeterred Janet piloted her small boat single-handed to aid the ship and bring it into safety of Pierowall Bay.[10] This act of bravery sealed her fate, it was inconceivable that a mere woman could be capable of such an act. Tried and sentenced to death for witchcraft, the story has one last twist. On execution day the dungeon she had been held in was empty. The romantic conclusion is that her lover, thought lost, had in fact been press-ganged into the navy. He had returned just in time to make her escape. 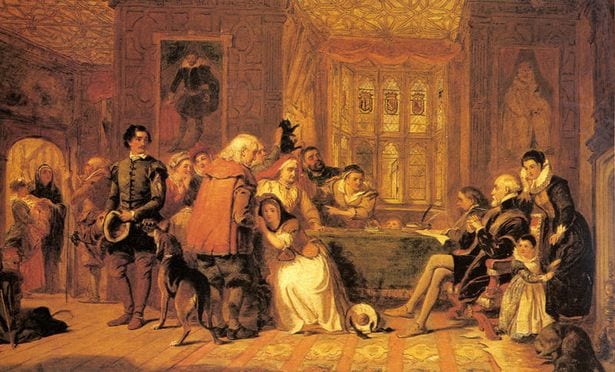 The craze for persecuting witches largely missed Wales, their courts were so full up with felons that prosecuting witches was seen as a luxury. In all there were five executions for witchcraft in Wales.[11] The first of these was Gwen Ferch Ellis in 1594. Gwen was a woman with a reputation for healing, but could she also use her powers for ill? If she had kept herself to herself she would probably have gone unnoticed.

Her mistake was crossing social boundaries. The offense that brought her to trial was leaving a charm, a poem written backwards, in the parlor of one of the local gentry. It was seen as a sign to inflict harm on the household. She had the chance to flee but was adamant she had done no wrong. Many of the people her charms had helped testified against her. She was found guilty and hanged.

An emerging author currently working on a first novel. Lives in Shrewsbury, England.


You can read more about witches on 10 Famous People Accused Of Witchcraft and 10 Modern Witch Hunts You Won’t Believe Happened Recently.