Tiger sharks—along with several larger, more aggressive breeds such as the bull shark and great white—have acquired a reputation for gobbling up all sorts of inedible junk. However, when it comes to inspecting the stomach contents of sharks, the tiger shark (aka “the garbage can of the sea”) appears to have the most indiscriminate appetite of the species.

In the gruesome roll call that follows, we aren’t talking about the sharks’ appetite for inanimate objects like rusty license plates. Instead, this shocking list includes unlikely members of the animal kingdom that have been swallowed by sharks. 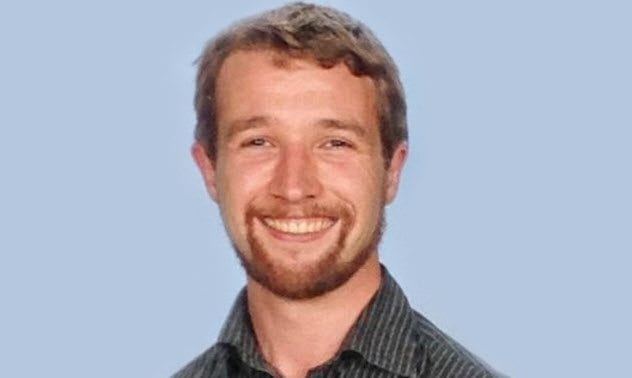 According to the International Shark Attack Files, the longest-running database on shark attacks, there have been 2,866 confirmed unprovoked shark attacks worldwide since 1580. Western Australia is renowned for having the deadliest waters, with the highest number of fatal shark attacks in the world.

Although shark attacks on humans are still fairly rare (with only 98 confirmed reports of unprovoked attacks in 2015), they do happen. Perhaps one of the most terrifying man-eating shark stories occurred off the coast of South Australia in February 2014.

Sam Kellett, a 28-year-old teacher, was freediving and spearfishing with his friends in the waters around Edithburgh (near Adelaide). According to witnesses at the inquest into Kellett’s death, a shark attacked him and swallowed him whole. In fact, the only items recovered from the scene were his speargun and two lead weights. 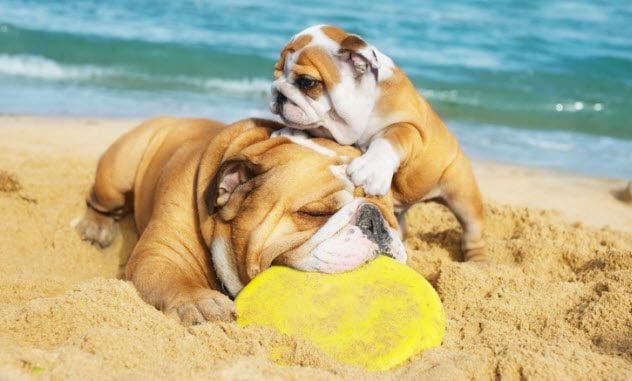 Dog owners living in Australian coastal resorts should keep a close eye on their pet pooches as there are well-documented cases of dogs being attacked and eaten by sharks.

Unfortunately, the erratic paddling motion of dogs is cited as one of the reasons they attract the unwanted attention of predators. However, one has to wonder whether careless dog owners have something to do with the gruesome demise of their beloved pets.

After all, both dogs in Coppleson’s accounts were wearing collars or leashes at the time! Perhaps instead of admiring the view, their owners should have been on the lookout for potential predators as they walked along the beach. 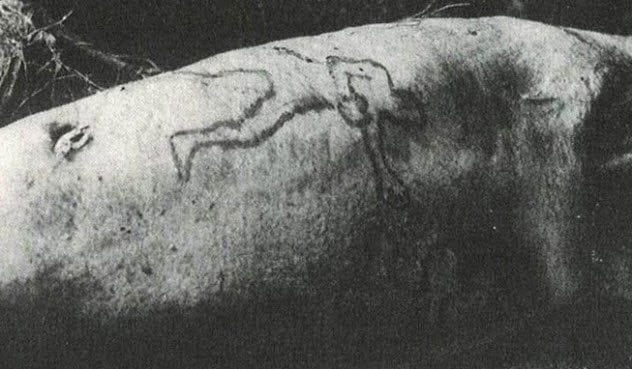 Although there are many incidents of sharks attacking humans and swallowing body parts, perhaps one of the most infamous occurred in April 1935. A tiger shark captured off the coast of Australia became ill within a week of being transferred to Coogee Aquarium. The shark later disgorged the left forearm of a male human, complete with a distinctive tattoo, much to the shock of the small crowd of aquarium visitors.

Fingerprint analysis—and a positive ID of the tattoo by his wife and brother—identified the severed arm as that of small-time criminal Jim Smith, who’d been missing for several weeks. Further examination of the limb revealed that it had been severed with a knife rather than torn from the victim’s body by the shark.

This led to a subsequent murder investigation. In the end, Patrick Brady, a convicted forger, was arrested and charged with Smith’s murder. However, Brady’s lawyer argued that there was not enough evidence to convict him because the arm “did not constitute a body” and Jim Smith, minus his arm, could still be alive!

Despite many theories, the case of the tattooed arm remains unsolved. 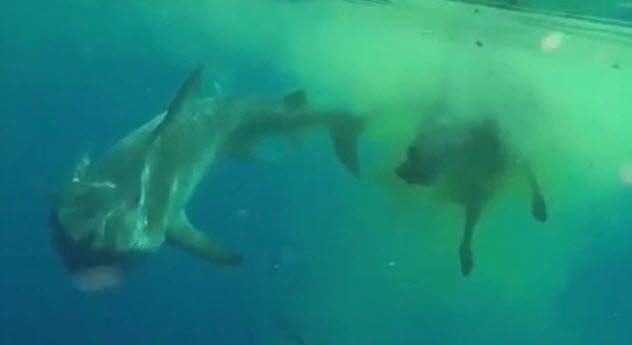 It seems that sharks are partial to the odd beef dinner, with cows and other cattle making it onto the menu.

One such incident, recorded on a video camera in October 2016, shows underwater footage of a tiger shark eating a horned zebu cow in the Indian Ocean. The story was uploaded to YouTube and picked up and reported by news channels across the globe. 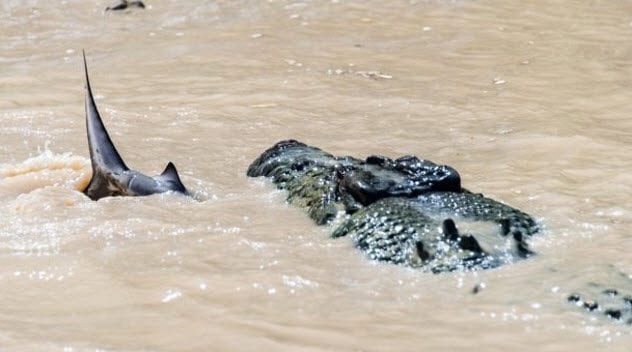 Tiger sharks certainly have healthy appetites and aren’t afraid to “go large” in terms of portion size. So it isn’t surprising to discover that they are partial to the occasional saltwater crocodile.

In 2013, when a giant crocodile head washed up on a beach in Saint Lucia, South Africa, locals suspected that it was the victim of a shark attack. As photos quickly circulated on the Internet, people speculated as to how the crocodile had died. The cleanly severed crocodile head and evidence of teeth marks bolstered the locals’ claims that the croc had fallen afoul of a great white shark.

In the battle of the top predators, however, large saltwater crocodiles are much more likely to overpower sharks, especially in shallower waters.

In August 2014, a boatload of tourists in the Northern Territory spotted one famous Adelaide river resident, Brutus the monster crocodile, crunching a bull shark in its jaws. After a short battle, Brutus, estimated to be 5.5 meters (18 ft) long and over 80 years old, overpowered the shark and slipped back beneath the surface of the water with it.

Brutus was later seen disappearing into the nearby mangroves with the shark still in its jaws. 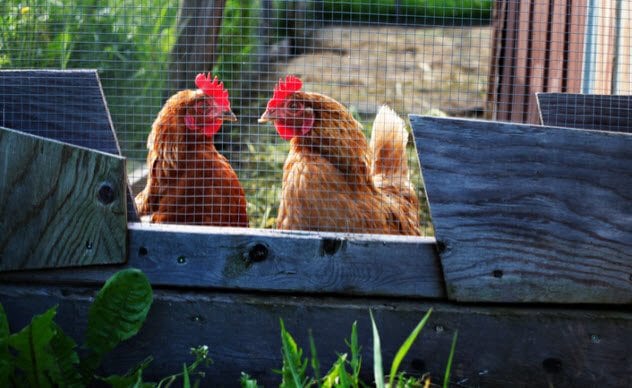 The tiger shark’s penchant for seafaring birds is well-documented. But land birds and songbirds have also been discovered in the stomachs of sharks, including yellow-billed cuckoos, mourning doves, wood thrushes, and Bahama yellowthroats.

Sharks’ appetite for terrestrial birds was discovered by Marcus Drymon, a researcher at Dauphin Island Sea Lab in Alabama. While Drymon was tagging a tiger shark during a routine sampling exercise, the shark coughed up some feathers. Drymon was fairly sure that the feathers belonged to land birds, rather than seabirds, prompting further research into the sharks’ diet by the researcher and his team.

Over the next two years, the researchers dissected the stomachs of 50 tiger sharks, discovering bird remains such as feathers, beaks, and bird feet in about half of the sharks. Further investigation found some of the bird parts did belong to land birds as Drymon suspected, with the remains of meadowlarks, tanagers, and woodpeckers being identified.

So how did land birds end up on the tiger sharks’ menu? One theory suggests that offshore oil rigs in the Gulf of Mexico are to blame. Every year, hundreds of migrating birds are killed when they collide with oil rigs.

Research suggests that the birds are disoriented by oil rig lights, causing the birds to crash into the lights or become exhausted and fall in the water. This makes the birds easy prey for predators like tiger sharks. Some scientists suggest that the sharks learn to feed where birds are available to them, which helps to explain why so many sharks in the area have the remains of land birds in their stomachs.

The oil rig theory doesn’t explain one peculiar land bird–eating incident, however. Investigation of the stomach contents of a tiger shark revealed the remains of several chickens . . . and their chicken coop! 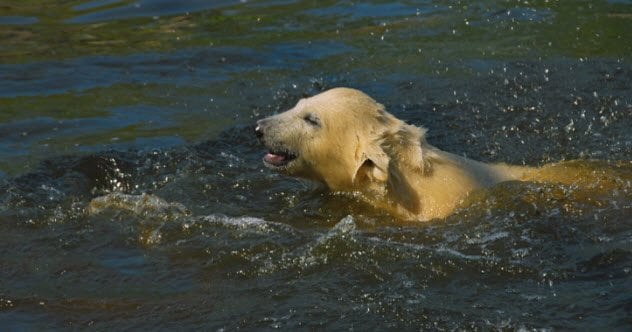 In 2008, while investigating the increase in deaths of harbor seals, scientists stumbled across the remains of a polar bear in the stomach of a Greenland shark, one of two species of sleeper shark found in the arctic archipelago of Svalbard.

Further investigation of the shark’s stomach contents noted the absence of organisms which usually colonize decaying meat. This led the scientists to suggest that the Greenland shark attacked and killed the young polar bear. However, shark experts considered it more likely that the shark had eaten the bear’s dead carcass. 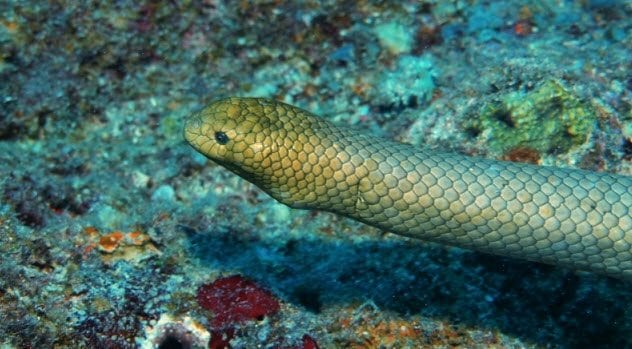 You certainly need to be vigilant if you fancy going for a swim in Shark Bay, Western Australia. As well as having a large population of tiger sharks, the bay contains many other species of shark and at least six different species of venomous sea snake.

Despite sea snakes being highly venomous, the olive-headed sea snake and the bar-bellied sea snake are common prey for tiger sharks, which aren’t affected by the venom. 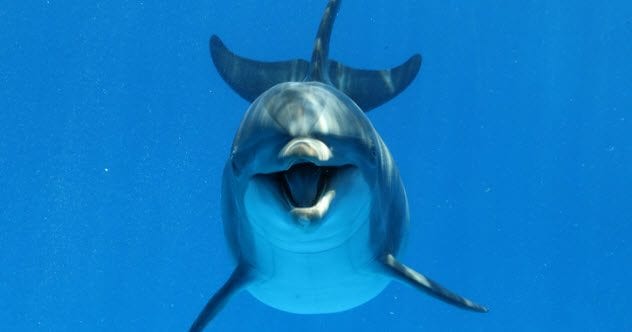 Larger sharks—such as tiger sharks, bull sharks, and the great white—are known to prey on smaller species of dolphins, with some attacks being captured on camera. Studies on the eating habits and behavior of tiger sharks have also identified the remains of dolphins in their stomach contents.

However, dolphins aren’t passive victims. They consider sharks to be one of their natural enemies. If sharks enter the dolphins’ territory, the dolphins have been known to surround weak or injured dolphins in their pod. Then the dolphins attack the sharks, ramming the sharks in the gills with their snouts to maim or kill the sharks. 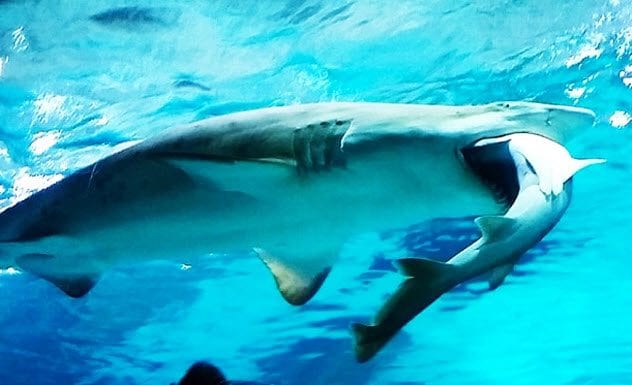 Sharks are cannibals! In fact, tiger sharks eat smaller sharks as part of their “normal” diet.

In January 2016, dramatic footage captured the moment when a 2.2-meter (7.2 ft) tiger shark ate a banded houndshark at the COEX Aquarium in Seoul, South Korea. In the video, the tiger shark appears to have swallowed the smaller shark whole, leaving only the tip of its tail protruding from the tiger shark’s jaws. The incident was watched by a number of astonished aquarium visitors.

Jane is a freelance writer and founder/editor of the Maflingo lifestyle blog. She writes about homes, interiors, DIY, money-saving tips, and offers her “Jane’s eye” view of the world with her random musings. Find her on Twitter, Instagram, Pinterest, and Facebook.