Modern human beings have lived on Earth for about 200,000 years. In that time, we’ve been almost everywhere—on land, in the sea, and on (and under) the water. You’d think we’d pretty much seen it all.

However, that’s not the case. Whether we’re talking reptiles, dinosaurs, sharks, fish, flies, arthropods, or worms, nature is full of surprises. As these 10 bizarre, newly discovered animal species indicate, such discoveries also increase, alter, and sometimes contradict our understanding of biodiversity, ecological relationships, and evolution itself. 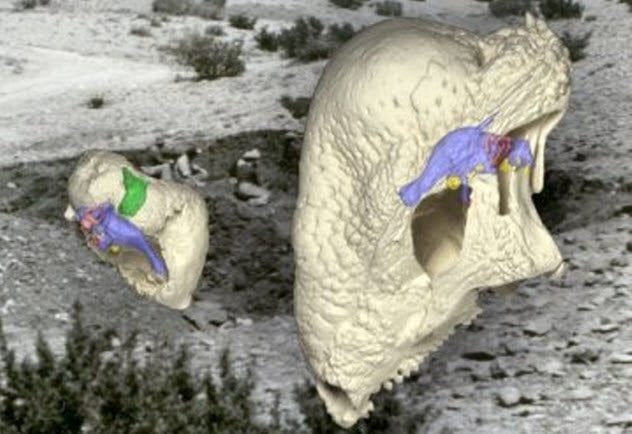 Dinosaurs copied body and skull shapes from earlier animals. A new species of reptile, Triopticus primus (“first of three eyes”), lived 230 million years ago, long before dinosaurs appeared. Although the Triopticus actually had only two eyes, it looked like it had a third eye due to a pit at the top of its head.

According to Virginia Tech research scientist Michelle Stocker, Triopticus is an example of convergence, the evolutionary pathway by which animals only distantly related come to look like one another. Diversification occurred quickly after the Great Permian Extinction 250 million years ago.

Assistant Professor of Paleontology Sterling Nesbitt of Virginia Tech explained, “Reptiles exploded onto the scene and almost immediately diversified into many different sizes and shapes. These early body shapes were later mimicked by dinosaurs.” 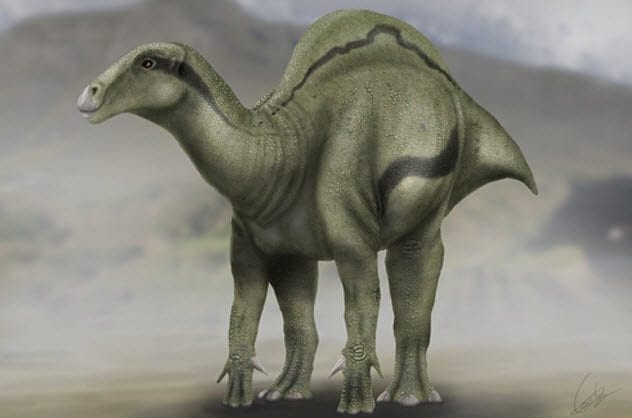 Morelladon beltrani, a new species of dinosaur unearthed in Spain, shows an odd anatomical appendage: a sail growing out of its back along its spine. The purpose of this ridgelike structure remains unknown, although it might have stored extra fat, been used in display, or helped to control body temperature.

The dinosaur, which lived 125 million years ago, was 6 meters (20 ft) long and 2.4 meters (8 ft) tall. It probably resembled the larger Iguanodon, which lacked the Morelladon‘s distinctive “sail.” The sail-backed Morelladon shows that there was diversity among dinosaurs. 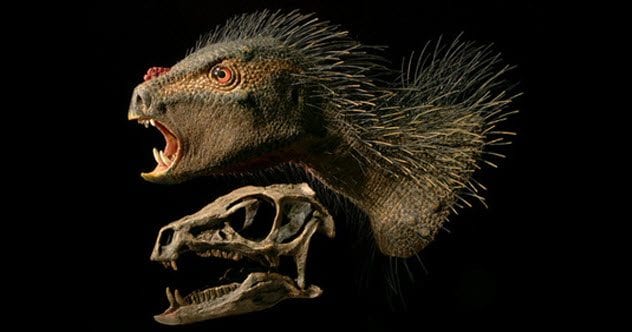 Among the tiniest dinosaurs currently known, the newly discovered Pegomastax was a bizarre, fanged, dwarf herbivore with an 8-centimeter-long (3 in) skull, 2.5-centimeter (1 in) jaws, a parrotlike beak, and sharp teeth. Its body, which may have been covered in quills, was less than 0.6 meters (2 ft) long and may have weighed less than a small domestic cat.

With two stabbing canines in front, the dinosaur’s teeth could shear plants like self-sharpening scissors. However, its skull appeared to be adapted to pluck fruit. According to Dr. Paul C. Sereno, a paleontologist at the University of Chicago, a dinosaur with sharp teeth is rarely herbivorous. 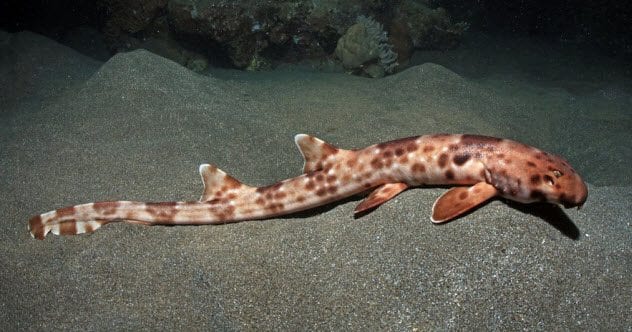 Found in the waters of eastern Indonesia, Hemiscyllium halmahera, a new species of 71-centimeter (28 in) “walking” shark, relies on its fins to move across the ocean floor.

As the sharks wriggle their bodies, they push with their pectoral and pelvic fins. Brown with dark spots, the shark’s coloration approximates the sandy bottom of the sea and the rocks of its environment. 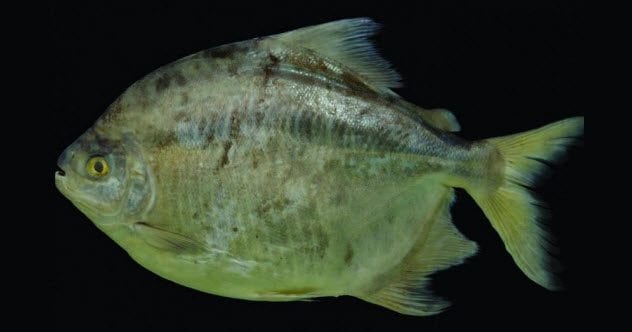 Flesh-eating piranha so numerous that their frenzied feeding churns dank water are favorite villains of horror movies. The new Myloplus zorroi species, named for the legendary Latin swordsman Zorro, was discovered in 2007 in an Amazon River tributary.

Scientists were surprised to find that it doesn’t eat meat. Instead, it feeds on seeds, fruit, and vegetation with unique teeth that evolved to grind seeds. The new species, which is a reddish color with a yellow belly and fins, grows to at least 46 centimeters (18 in) in length and “lives in moderate- to fast-moving streams that flow over rocky and sandy soil.” 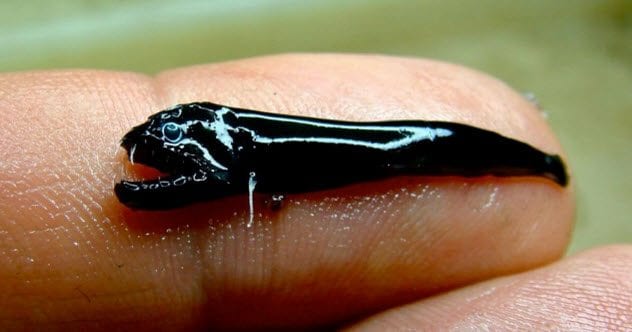 The tiny, shiny, scaleless blackfish looks like a miniature oil slick. Discovered among four ancient volcanoes off the coast of Australia, the fish has disproportionately large, rather alarming jaws and teeth.

The finger-size, fanged fish also has a tail that may be capable of delivering a nasty sting. The new species of blackfish was discovered by scientists with the Commonwealth Scientific and Industrial Research Organization, Australia’s national science agency, while they were on Investigator, Australia’s new research vessel. 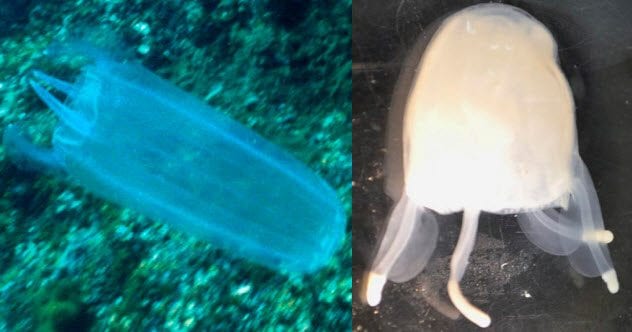 Two new species of venomous jellyfish have been discovered—Keesingia gigas and Malo bella.

Keesingia gigas has been spotted in coastal waters around the world but mostly off Australia’s north coast. Generally, jellyfish use their tentacles, in which their stinging cells are concentrated, to catch their prey. But the unusually large, 50-centimeter (20 in) Keesingia gigas appears to have no tentacles. If it does, they’re so fine that they’ve been overlooked.

The species name bella of the Malo bella jellyfish refers to the jellyfish’s 1.9-centimeter (0.7 in) bell, its beauty, and the Montebello Islands in Western Australia’s Pilbara region where the species was initially discovered. The jellyfish is the smallest of the Malo genus. Its relationship to others in its species suggests that the Malo bella is likely to be extremely toxic. 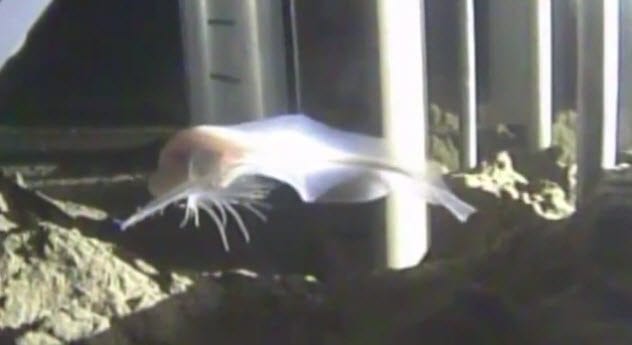 An expedition led by Jeff Drazen and Patty Fryer of the University of Hawaii has captured footage of a new species of a ghostly fish that swims the Mariana Trench. The fish was filmed at a depth of 8,100 meters (27,000 ft). Tentatively, marine biologists have identified it as a new species of snailfish, although its delicate body is shaped differently than others of its kind.

It is described as having “broad, translucent fins, stringy appendages, and a tail.” Instead of swimming, this snailfish looks like it’s using its finlike appendages to row through the water. The fish is also amazing for its ability to survive the tremendous pressure of the ocean depths, which normally “impedes muscles and nerves and bends proteins out of shape, disrupting the working of enzymes required for life.” 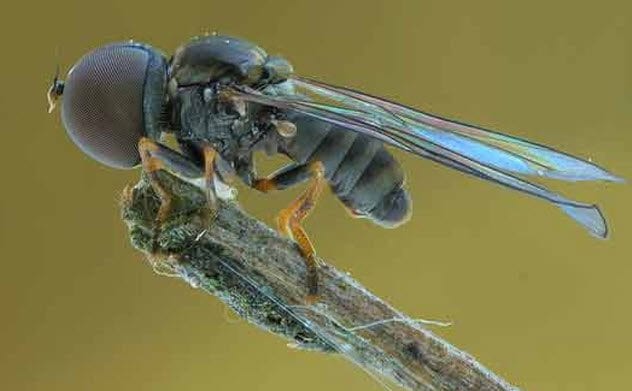 A 50-million-year-old fossilized fly’s head was almost completely covered by its two huge, bulbous compound eyes. The fossil was discovered in Republic, Washington, by a student on a field trip. The giant-eyed fly is a member of the Pipunculidae family of today’s big-headed flies. Farmers cultivate big-headed flies because of their tendency to attack leaf-eating bugs, which the flies use as hosts for their offspring.

Big-heads implant their larvae into leafhoppers. Then the larvae “eat their hosts alive from inside until the baby flies hatch.” According to Bruce Archibald, a biologist at B.C.’s Simon Fraser University, their enormous eyes help big-heads hunt for planthoppers and leafhoppers.

The fossilized fly head was discovered in fossil beds that date to 12–15 million years after the dinosaurs became extinct. These discoveries shed light on the “broad ecological-evolutionary revolution of expanding predator-prey relationships and increasing biodiversity during the formation of new ecosystems,” said Archibald. 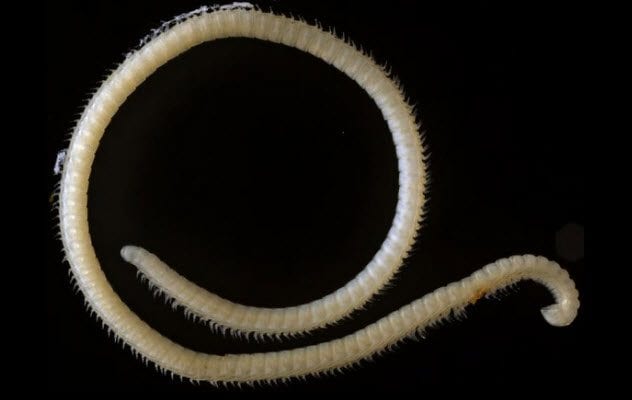 Illacme tobini, a new species of millipede found in little-explored marble caves in the Sequoia National Park in California, has 414 legs, 200 poison glands, over 100 body segments, hairs that secrete silk, and four penises. It’s an evolutionary cousin of the Illacme plenipes, which has a whopping 750 legs.

The millipede was discovered by Jean Krejca of Zara Environmental, LLC. The arthropod also has “weird-looking mouth parts of a mysterious function” and a pair of nozzles on each of its body segments. The nozzles shoot a defense chemical, but its nature is currently unknown.