The vicious murder of Andrew and Abby Borden in 1892 has become part of the fabric of American folklore. For over a century, numerous theories as to who carried out the slaying have been ascribed to the housemaid, numerous Borden relatives, as well as an unknown passerby. Despite multiple hypotheses, all evidence point to the youngest daughter, Lizzie. The following facts not only cast doubt on her innocence but will forever cast a shadow on her name.

10Frugality At Its Finest 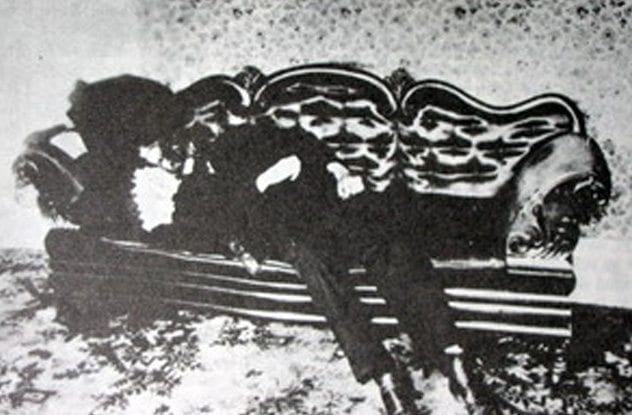 At 32 years old, Lizzie Borden was still living at home with her older sister Emma, her father Andrew, and stepmother Abby. Andrew was the president of a local bank as well as a successful businessman who owned a great deal of commercial property.

Undoubtedly, Andrew was one of the wealthiest men in Fall River, however, he was notoriously thrifty. His wealth could have easily afforded the family to live the good life among the state’s elite, yet he opted to remain in a small home on the other side of the tracks, far from the glamorous life Lizzie so desperately envied. In an attempt to save money, Andrew even went as far as refusing to discard spoiled food that was making the entire household sick. Through her perspective, Lizzie justifiably felt that her father’s frugality was ruining her chances of social success, and living in a home with no electricity or indoor plumbing only reinforced her resentment and hatred. 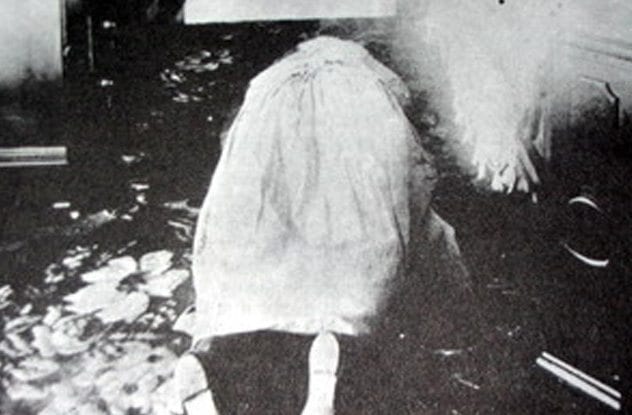 According to Bristol professor Jules Ryckebusch, Lizzie hated her stepmother. After the death of Lizzie’s biological mother, Andrew married Abby, a woman described as being short, fat, and the daughter of a man who peddled tin from a pushcart. At the time of their marriage, Abby was 37 years old and was viewed as just “an old maid.” Their marriage was questioned by townspeople as being a ploy for Andrew just so he could have both a housekeeper and someone to raise his daughters. Lizzie’s relationship with Abby has been described as “less than loving,” and although that doesn’t assign guilt, historians believe her hatred toward her stepmother drove her to murder. The horrendous act gave her no choice but to next kill her father, who would undoubtedly see through Lizzie’s incongruous lies.

One particular instance that struck detectives as odd was Lizzie’s detached manner during interrogation. During questioning, Deputy Marshal Fleet referred to Abby as Lizzie’s mother, to which Lizzie irrefutably made clear, “She is not my mother—she is my stepmother.” 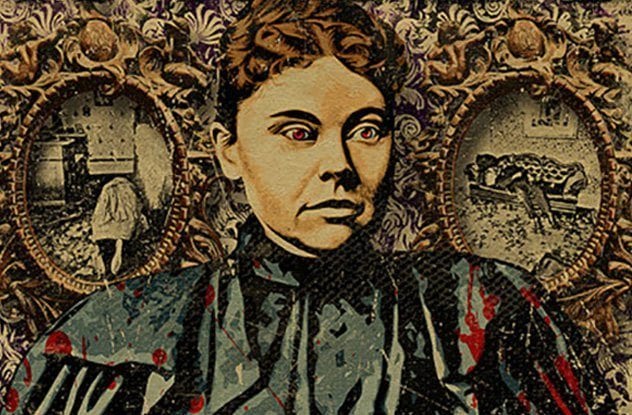 In 1891, Lizzie entered her parents’ bedroom and stole Abby’s jewelry and money from her father. Although they knew Lizzie was the culprit, they called the police and requested an investigation into “the unknown thief.” What would follow in the coming weeks were silent gestures aimed toward Lizzie, such as the Borden’s installing bolts and padlocks on doors throughout the house. Soon after, Lizzie randomly telephoned her friend Alice Russell with dire premonitions regarding her father’s wellbeing.

According to Russell, Lizzie complained that she had a feeling something bad was going to happen given her father’s countless “enemies.” These nameless men apparently “all hated him” because he was a ruthless businessman, according to Lizzie, and she wouldn’t put it past “them” to take retribution by burning down the Borden home. 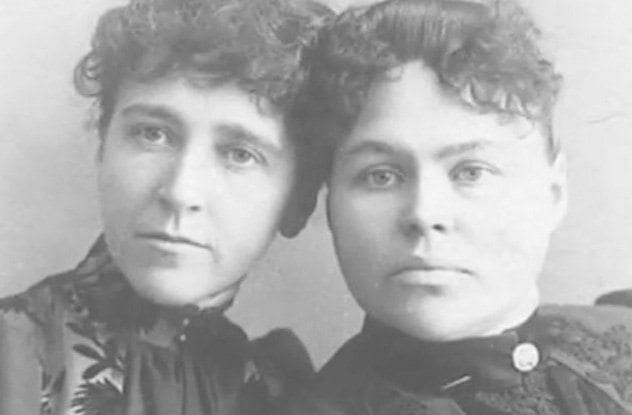 Lizzie and her sister, Emma, had never gotten along with Abby. Tensions boiled over when they saw their inheritance gradually diminish. In the months leading to the Borders’ murder, Andrew lavished Abby as well as various branches of her family with extravagant gifts such as real estate. When Andrew transferred ownership of a home he owned over to his wife, Emma and Lizzie demanded gifts of equal value and began referring to Abby as “Mrs. Borden.”

The night before the murders, the Bordens were visited by John Morse, Lizzie’s maternal uncle. Morse was invited to stay a few days to discuss business matters. Given the tense atmosphere created in the recent months, it is speculated that Lizzie’s murderous rage was provoked by secretly overhearing business matters between the two. The mere thought of seeing more of her alleged rightful inheritance needlessly dwindle ultimately led to Lizzie’s pre-meditated act of violence. 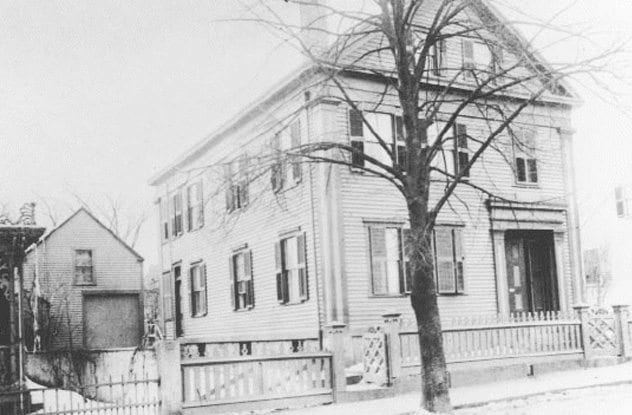 From the start, the crime scene was irreparably compromised, with noteworthy evidence not taken into consideration. Case in point, the hatchet blade (with a missing handle) was discovered in the basement. It would take nearly a century for forensic experts to determine that the blade made the shreds in Abby’s head scarf.

Interestingly enough, a detective discovered a “foot-long cylindrical stick” in the basement’s furnace. Now, let’s take into consideration that in the 19th century, blood can be washed from metal but not porous wood. The blade itself appeared to have been rolled while wet in the furnace ashes.

Perhaps what’s most troubling is that after the murders, Lizzie burned a dress she claimed was stained with paint. It doesn’t take Sherlock Holmes to put two and two together: Police argued that the dress was stained in her parents’ blood. 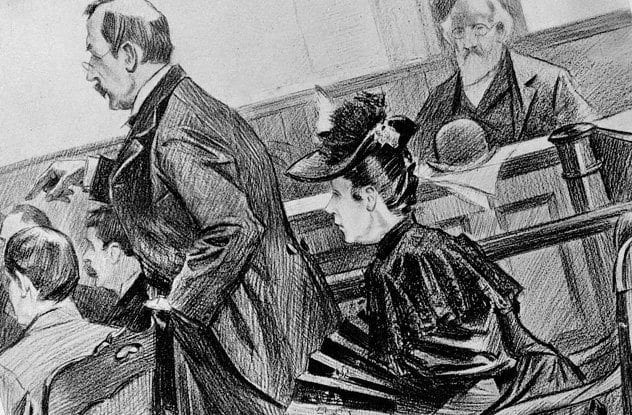 From the beginning, the police disliked Lizzie’s attitude, claiming that she was too calm and poised for someone who had just discovered her parents murdered. During questioning, her answers were not only strange and contradictory but she continuously changed her alibi.

In court, it was revealed that Lizzie had told many people that she was in the barn for “20 minutes or possibly a half hour” during the time the murders took place. However, the housemaid Bridget, as well as two neighbors, disputed this timeframe, claiming Lizzie was in the barn for no more than five minutes. Her whereabouts incessantly changed during questing, putting her in more than one place at once. As her lies evidently began to unravel, detectives became more confident as to who their culprit was, unaware of the obstacles they would soon face in court. 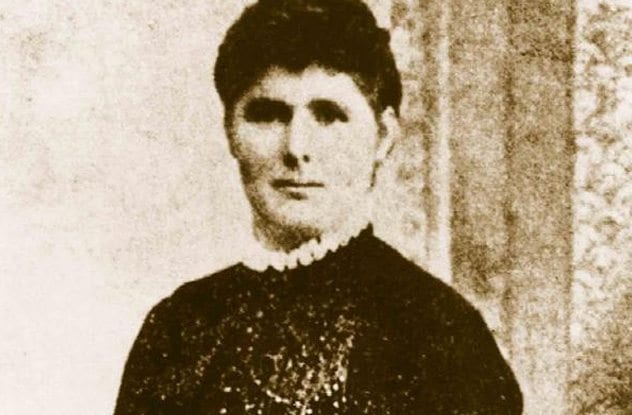 The Bordens’ maid, Bridget Sullivan, testified that on the morning of the murders, Mr. Borden returned from a walk, only to find that he was locked out. As Bridget hastily tried to unbolt three different locks, she blurted out an expletive in a moment of frustration, which was met with laughter from Lizzie at the top of the stairs. After Mr. Borden entered the home, Bridget went to lie down at 11:00 AM. 10 minutes later, Lizzie hollered, “Maggie, come down! Come down quick; Father’s dead; somebody came in and killed him.” What is intriguing about this is that Bridget specifically stated how the entire home was silent prior to Lizzie’s “discovery.” There was no sound of the door opening or closing, and the only ones in the home were the three of them, not including the undiscovered corpse of Abby.

Lizzie initially confirmed Bridget’s testimony, stating she was upstairs when her father arrived, but then claimed that she could not remember the minutest details of her whereabouts. She changed her story from being upstairs to downstairs to out in the yard. In the end, she settled on placing her whereabouts in the barn for 20–30 minutes. 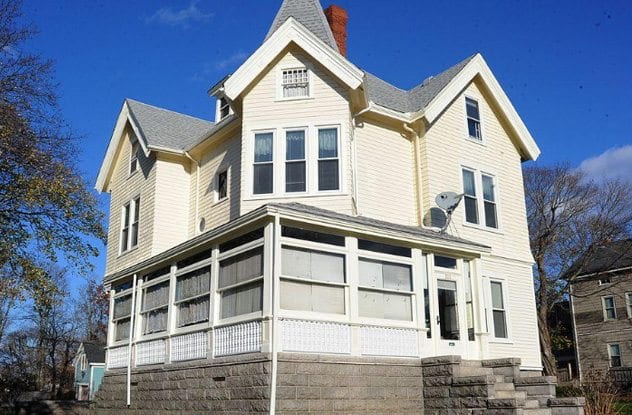 During the investigation, it was determined that no money or jewelry was missing. This was peculiar, given that just one year prior, small amounts of change was taken during a daytime break-in of the Borden residence.

Following the trial, Lizzie and Emma inherited Andrew’s fortune, valued around $7 million today. Their first extravagant purchase was a second home in Fall River. Their new 14-room Victorian mansion sat high on Heritage Hill, located in one of the most prominent and ritzy neighborhoods of its day. It was quite the opposite of the modest cramped home in a noisy business center Lizzie so clearly despised.

Her new life afforded her opportunities once denied, and she was swift to reap the reward, much like the Menendez brothers’ inexorable expenditures. Lizzie took up traveling, requiring nothing but first-class along the way. In addition, she purchased cars and hired chauffeurs as well as live-in maids to personify her new glamorous image. 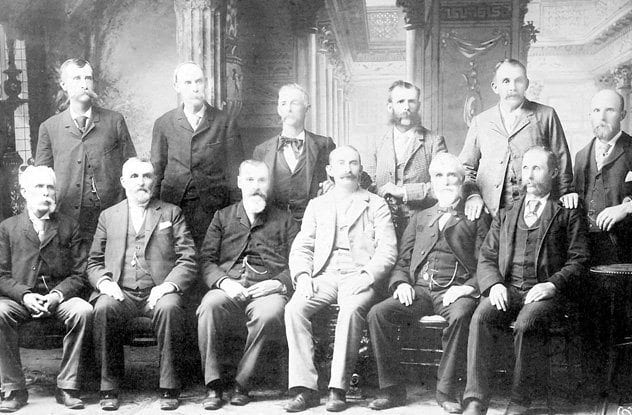 The day before the murders, Lizzie unsuccessfully tried to purchase prussic acid (hydrogen cyanide) at a local pharmacy. Eli Bense, the store clerk, refused Lizzie’s request, given the lethality of the chemical compound, which was used by the Nazis as a genocidal agent during World War II.

Interestingly enough, Abby woke the day prior with a debilitating stomach ailment. She suggested to her physician, Dr. Bowen, that she had been poisoned, a conclusion he found unlikely but nonetheless striking given the seriousness of such sinister claims. Historians speculate that upon the store clerk’s refusal of sale, Lizzie resorted to a more easily attainable murder weapon.

Lizzie’s attempt to buy the poison one day prior to the slaughter shows intent but was ultimately thrown out in the court of law. 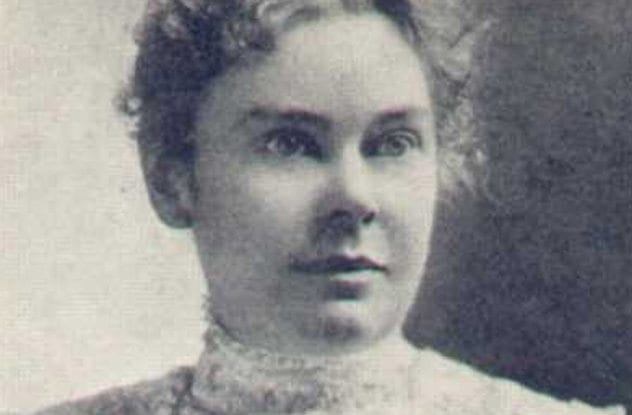 What stood out to investigators in terms of analytical psychology were the number of hatchet strikes the victims received, suggesting the murders were a crime of passion and hate. The splitting of a skull from the iron blade of a hatchet takes minute effort in comparison to what the Bordens were subjected to, suggesting that the culprit held immense built-up anger. Such passion often points to those closest to the victims, more often than not a family member or close friend venting their rage.

Abby’s back was turned to her attacker. Assuming she heard their approach, that implies she knew and trusted them.

However, nothing’s more troubling than Lizzie’s past. She was known to be cruel to animals, even at one time beheading her stepmother’s cat. Aggression and cruelty toward animals, lack of empathy or remorse, criminal versatility, pathological lying, and poor or abusive relationships summarize the stark past Lizzie embodied. Such characteristics demonstrate antisocial personality disorder, seen in socio- and psychopaths.