Dance is one of the most ancient and widespread human behaviors, but no physical artifacts of this art exist. What little we can ascertain of ancient dances comes from scant descriptions and those few practiced to this day. For millennia, dances have been used as a form of social cohesion, religious devotion, and even healing. Many have origins shrouded in mystery, and most are near extinction. 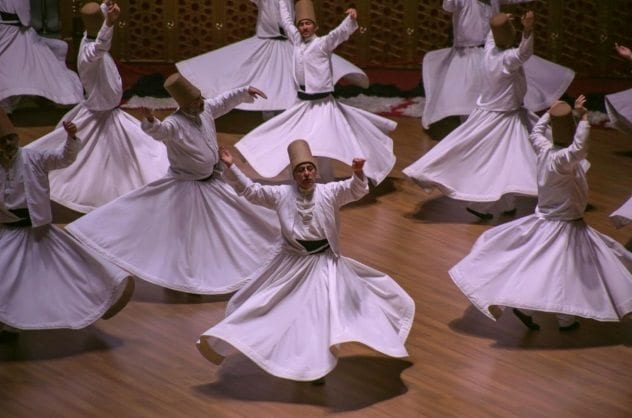 The dervishes of the Mevlevi Order achieve union with the divine through dance. Founded in 1273 by the poet and mystic Rumi, this order derives from Konya in modern-day Turkey. Rumi was born in Afghanistan but migrated westward with this family following the Mongol onslaught. Rumi was introduced to the mystic tradition of dancing through his friend, Shams-e Tabrizi. Following Rumi’s death at the hands of his own son, Sultan Veled, his grandson, and a disciple founded the Mevlevi Order.

The Mevlevi are a highly respected school within Sufism, Islam’s esoteric component. Attributed to Rumi, the whirling dervish dance known as Sema was formalized in the 15th century. Each element is symbolic. The white skirt signifies the ego’s shroud. The camel-hair hat is the tombstone of the ego. The removal of the semazen’s (dancer’s) black cloak symbolizes spiritual rebirth. Crossed arms signify the number one and divine unity.

9 Madagascar’s Dance Of The Dead 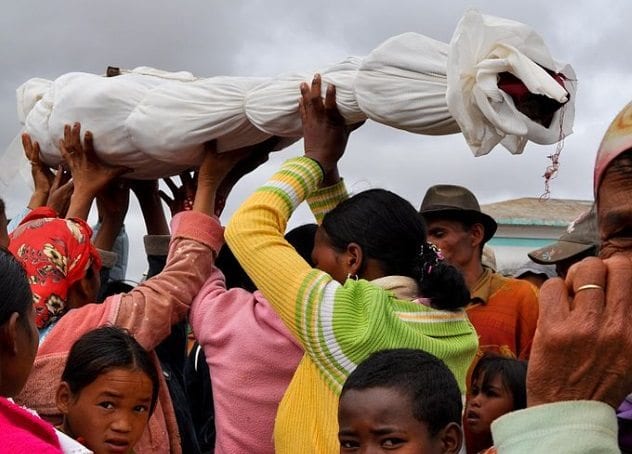 In the central highlands of Madagascar, the Malagasy dance with the dead. During the ritual of Famadihana, the deceased are removed from crypts and paraded around to the beat of a brass band. Malagasy use the opportunity to talk to their deceased loved ones and ask them for guidance. 52-year-old farmer Rakotonarivo Henri explains the significance of ancestor worship: “We do not come from mud; we come from these bodies.”

Millions practice Famadihana across the island nation. Traditionally, the Malagasy believe that the boundary between life and death is not clear-cut. Ancestors have the ability to travel between dimensions. “Famadihana strengthens our family between generations,” reveals 30-year-old tech worker Jean Jacques Ratovoherison. “The bones of our ancestors are valuable to us and must never be lost in the world.” Expenses for Famadihana can be exorbitant. Dozens or even hundreds typically attend. There is always fine food and live music. 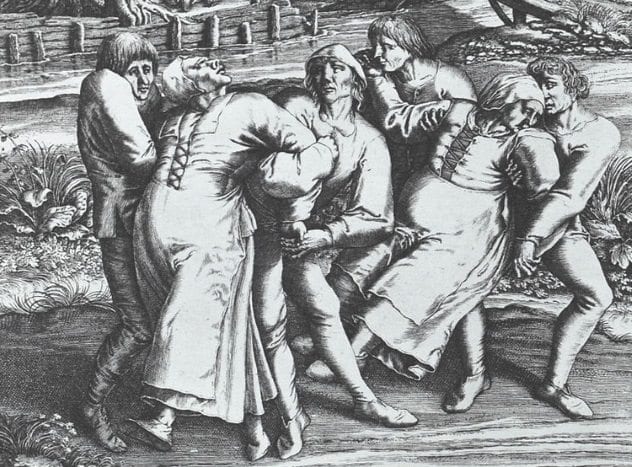 Between the 13th and 17th centuries, Europe was gripped by dance mania. St. John’s Dance (or St. Vitus’s Dance) caused people to dance hysterically for as long as months at a time. Often, people would dance themselves to death through exhaustion, heart failure, or stroke. In 1278, 200 maniacal dancers in Germany were killed or injured when the bridge they were dancing on collapsed. Modern historians tend to attribute this dance mania to women. However, medieval accounts reveal that men, women, and children were all susceptible to this maniacal malady.

The most famous outbreak occurred on June 24, 1374, in Aachen, Germany. Cases were not isolated to Germany, though. Holland, Italy, France, and Luxembourg saw dance mania crazes over three centuries, involving thousands. Some believe ergot poisoning may explain the symptoms of St. John’s Dance. Others believe the dancers were members of deviant sects seeking divine favor following the Black Plague. 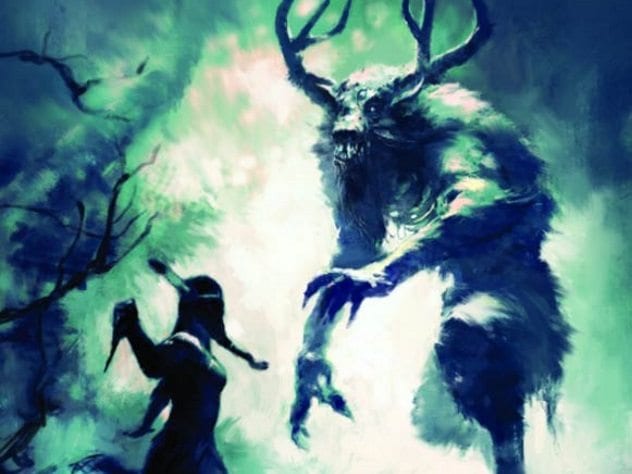 In Algonquin, “wendigo” translates roughly to “the evil spirit that devours mankind.” According to legend, these emaciated monsters with matted hair and decaying skin were made when a person cannibalized another. They became transformed into a wendigo with an insatiable appetite for human flesh.

The Cree developed a dance to help them deal with the nightmare of these cannibalistic creatures. The Wihtikokansimoowin involves satirical portrayals of the man-eating monster and valiant portrayals of wendigo hunters. Legend holds that the Cree’s “Wendigo-like Dance” was performed during periods of famine to reinforce the gravity of their cannibalism taboo.

Conceived in a dream, the dance was first performed by the Assiniboine tribe. The Cree eventually adopted it and incorporated it into their Sun Dance ritual. It is always performed on the last day of the celebration. The last known Wihtikokansimoowin in the United States occurred at Leech Lake Indian Reservation in Northern Minnesota. 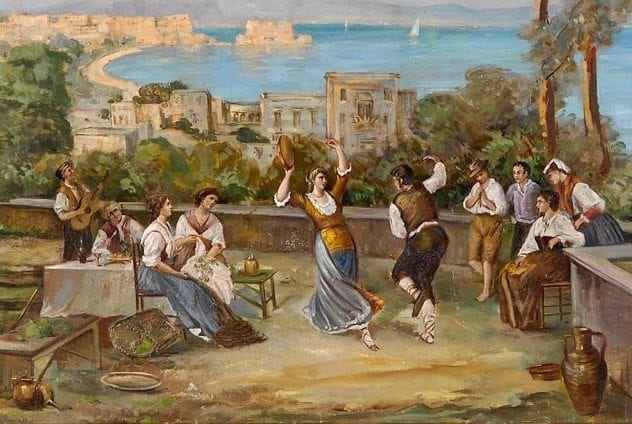 First recorded in the 15th century, the tarantella gets its name from an Italian wolf spider referred to as a “tarantula.” Muscle spasms, delirium, and death were associated with its bite. Legend has it the sweaty, gyrating dance developed to flush the toxin out of the body. Musicians wandered fields expecting pay to play for the plagued. This upbeat tambourine grove soon became the iconic dance of Southern Italy.

This cure remained in place for 300 years until people began to investigate. British playwright Oliver Goldsmith forced his servant to be bitten by one of the spiders. He discovered that the bite only caused minor swelling around the wound. A 17th-century Italian doctor concluded that tarantism was a “feigned activity of malingerers.” The tarantula was not the culprit; people just needed to vent. Others theorize that the tarantella may have developed with a Dionysian cult that was forced underground. 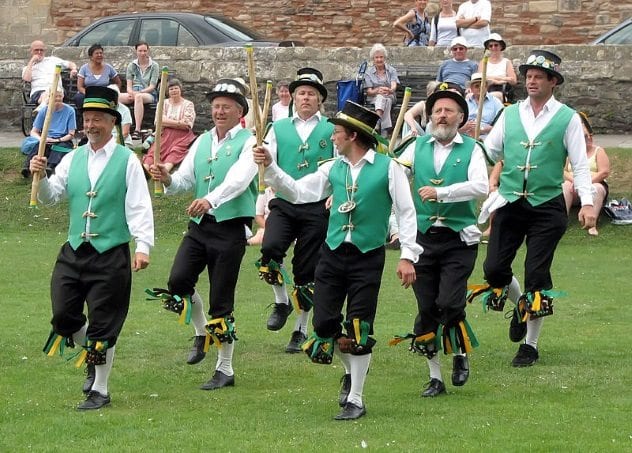 Morris dancing is an ancient English tradition. The first reference to it dates back to 1448, but the dance likely goes back even further. Most believe the name is derived from “Morisco,” a derogatory term meaning “little Moors.” The tradition of some dancers wearing blackened faces seems to support this connection to North Africa, as does the dancers’ use of bells tied to their legs. Beyond the circumstantial evidence, there is nothing concretely tying this ancient rite to Moorish tradition.

Many believe that Morris dancing originated deep in England’s pagan past. One of the most popular theories holds that it was a ritual fertility dance of the Celts. Others believe the dance has a higher pedigree. By the 16th century, dances involving elaborate costumes with bells were commonplace in European courts. Little concrete evidence exists for either of these theories, however. The dance persists to this day, with several regional variations throughout Britain.

4 Dance Of The Kachinas 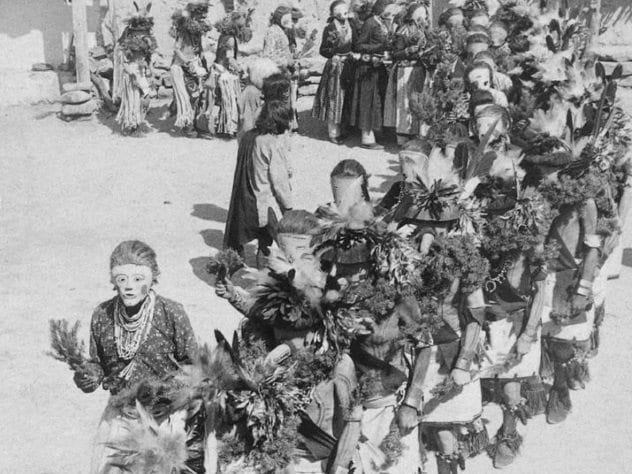 The Hopi Kachina dances signify the return of ancestors and spirits—both good and evil—to the world of the living. Marked with flair and theatricality, these celebrations involve masked dancers representing these beings from a parallel dimension. The Soyaluna ceremony in December welcomes the spirits, while July’s Niman festival bids them farewell. The farewell ceremony involves many secret rituals hidden from view during the public celebration. No other ceremony involves more colorful masks or displays.

According to the Hopi, everything in nature is imbued with a spirit. Some are good, while others are bad. In the Hopi pantheon, the Kachinas fall below the mighty Masauwu, the Spider Woman, and the Earth Goddess. The Kachinas can intercede on the behalf of their living relatives and are therefore worth placating. The Kachina dances are opportunities for social cohesion and mischief, which keeps people out of trouble for the rest of the year. 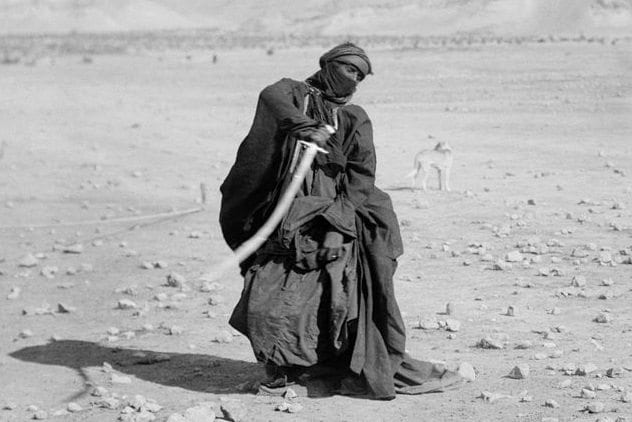 Sword dances are one of the most widespread rituals in the world. In Pakistan and Nepal, they are essential to weddings and other celebrations. Indian street fairs are incomplete without the paika adhata once used to train Odisha warriors. Inherited from Crete, sword dances were integral to Hellenistic identity. They are also widespread throughout Europe, particularly in areas corresponding with the Holy Roman Empire and Basque country.

For roughly four millennia, world cultures developed dances to both celebrate and study swords. These sword dances were considered an essential moral component of martial arts. Through patience, perseverance, and humility, these ancient rites taught invaluable lessons. Developed as a Chinese military exercise, jian wu evolved into an elaborate acrobatic exercise and became one of the four central dances of Chinese Opera. The Ottomans banned sword dancing, believing it was a ploy to acquire swords for a resistance movement.

2 Dance In Honor Of The Gods 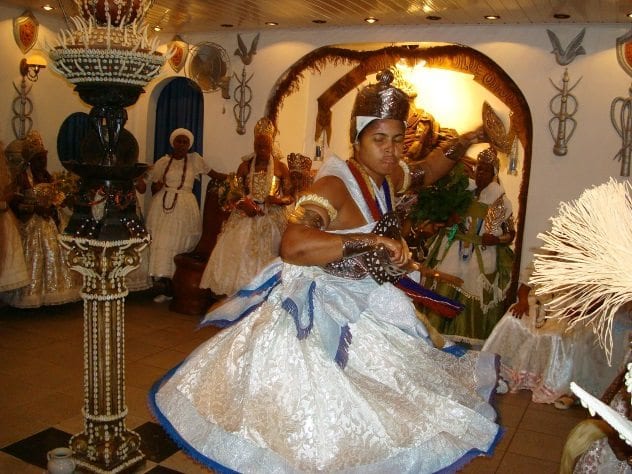 The Brazilian religion Candomble translates to “Dance in Honor of the Gods.” This faith mixes Catholicism with traditions from West African spiritual practices. Canomble was forged during the turbulent period between the 16th and 19th centuries, when the Portuguese imported slaves to Brazil from all over Africa. Slaves were forced to convert to Christianity. They merged various streams of traditional beliefs with the new faith as well as the indigenous Brazilian spirituality, which had parallels to their own.

From the religion’s inception, Candomble practitioners faced persecution and were forced to practice their religion in secret. Divine symbols and spirits were concealed behind the identity of Catholic saints. In the 1970s, the Brazilian government terminated a law requiring police permission for public practice of religion, allowing Candomble to move out of the shadows. Today, over two million people practice this faith. It is also found in the neighboring countries of Argentina, Venezuela, Uruguay, and Colombia. 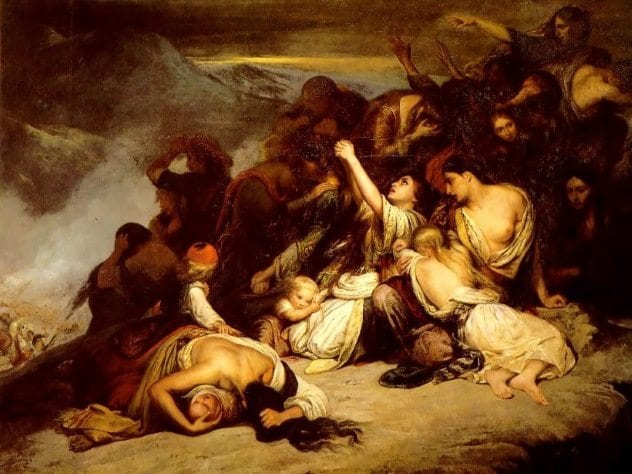 The Dance of Zalongo was a mass suicide by the Souliot people in the face of genocide. In 1803, after signing a peace treaty with the Souliot Confederacy of Epirus, Ottoman governor Ali Pasha reneged and attacked. His goal was enslavement of the women and complete annihilation of the men. In defiance, a troupe of over 50 dancing women amassed on the cliffs of Mt. Zalongo. One by one, the dancers cast their babies off the edge and then jumped after them.

The tale of their refusal to submit became legendary throughout Ottoman lands and Europe. The myth became immortalized in Romantic paintings and Greek songs. A sculpture by George Zongolopoulus now marks the location of the defiant dance of death in modern-day Greece. According to most, the women danced and sang folk songs during their mountaintop mass suicide. However, this detail may have been added after the fact for dramatic effect.

Dubbed the “Indiana Jones of folk music” by TimeOut.com, Geordie McElroy has hunted spell songs, incantations, and arcane melodies for the Smithsonian, Sony Music Group, and private collectors, A leading authority on occult music, he is also singer of LA-based band Blackwater Jukebox.