It’s easy to point to large eukaryotes, like trees or mammals, to illustrate the kind of complexity that can occur in living things. Yet, a huge portion of eukaryotes is actually microscopic. The conditions of the microscopic world produce creatures of stunning intricacy. Ironically, it’s a lack of complexity on the part of our own eyes that keeps us from seeing it. 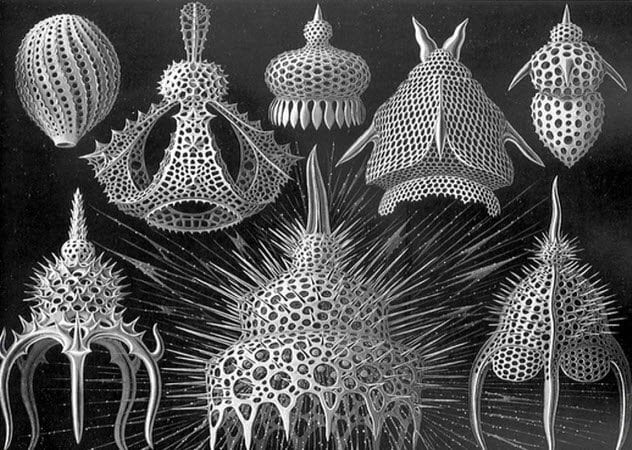 The humble, single-celled radiolarian is renowned for its ability to form intricate skeletons with radial symmetry. Their spiny, snowflake-like armor is made from lattices of opaline silica and features structural complexity bordering on the anomalous. Radiolarians of this kind have existed for at least 600 million years, and slightly simpler variants existed long before then.

Influential biologist and illustrator Ernst Haeckel spent years documenting thousands of radiolarian forms. In the late 19th century, he published a series of accurate (and therefore painstakingly detailed) illustrations of them in the hopes of popularizing the theory of evolution as an explanation for the complexity of organisms. 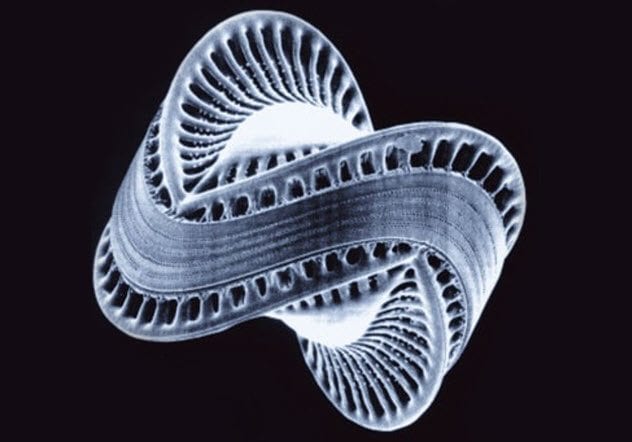 Like radiolarians, algae known as diatoms form a silica shell around themselves. Diatom shells, known as frustules, feature circular or near-bilateral symmetry and come in a much wider array of shapes. Though not perfectly symmetrical, the frustule can be very elaborate. This lack of symmetry has some benefit, however. The smaller half fits snugly into the larger one, like a lid on a box.

Unlike radiolarians, which are predatory but must rely on symbiotic algae during food shortages, diatoms are entirely photosynthetic. Diatoms also have a robust urea cycle, which is otherwise unique to animals. This feature allows them to make use of carbon and nitrogen more efficiently and may explain why diatoms exist in such huge numbers today.

Due to their ability to easily manufacture such a wide range of microstructures, it’s been proposed that diatoms could be modified to mass-produce nanoscale components for human engineers. 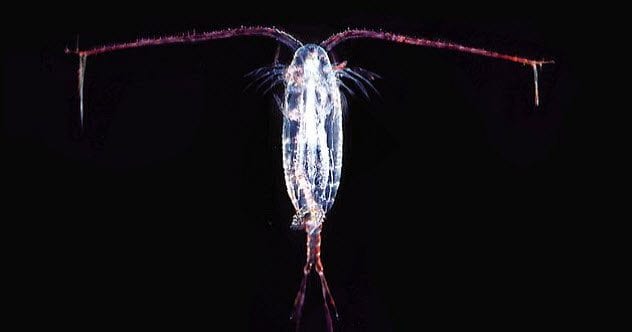 These crustaceans are so tiny that they can simply absorb oxygen. They have no need for a heart or circulatory system. Yet they have a remarkably well-organized, myelin-based nervous system, a trait previously thought to be exclusive to invertebrates.

Their specialized neural pathways give them acrobatic abilities that aren’t seen anywhere else in the animal kingdom. Proportionally speaking, the copepod is technically the world’s fastest and strongest animal. At less than 1 millimeter (.04 in) in size, they are capable of traveling 0.5 meters (1.6 ft) per second, within a few thousandths of a second. This is a feat of mechanical efficiency not yet achieved by any man-made motor.

Copepods also have buoyancy control, a trait also seen in whales. During the winter, copepods will descend to deeper parts of the ocean to hibernate. In response to increased water pressure, their bodies begin converting portions of stored oils into denser solids. With some adjustments, they are able to remain at their preferred depth without sinking or rising too much. 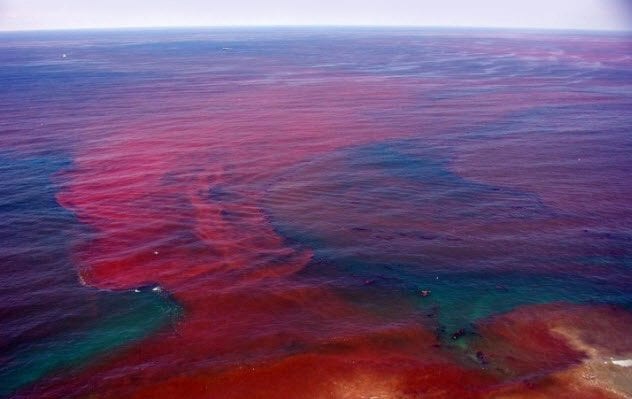 These single-celled protists are so small that some live symbiotically within two other organisms found on this list: radiolarians and forams. Despite this, dinoflagellates boast some pretty advanced features and are notoriously deadly in large numbers.

Whenever they’re not busy leaving swaths of glowing carnage behind them in the form of red tides, dinoflagellates are puzzling geneticists with their bizarre genomes. The dinoflagellate’s genome contains a baffling amount of genetic information despite its tiny size.

To be specific, one dinoflagellate nucleus can contain as much as 250 picograms (pg) of DNA per cell. A human nucleus contains a mere 3.2 pg. Stranger still, some dinoflagellate species have nuclei that are triangular, tetragonal, kidney-shaped, or U-shaped. 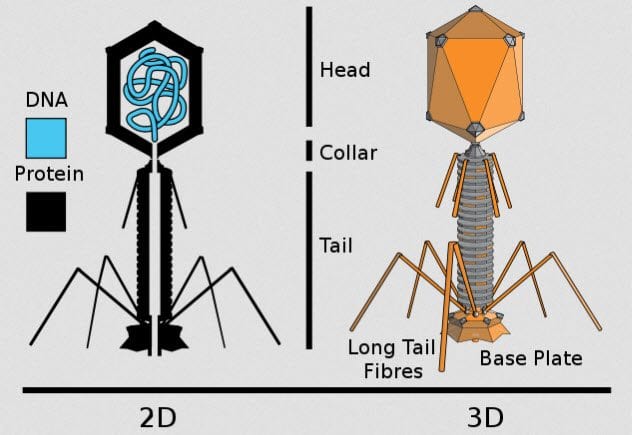 Phage T4 is a type of virus that has provided us with a wealth of information on genetics. It synthesizes some of the most complex particles seen in molecular biology and has become a sort of celebrity specimen due to its instantly recognizable structure.

The T4 is distinctly mechanical and bears a striking resemblance to NASA’s moon landing modules. Its “head,” a polyhedron with 20 faces, is carried atop a long rod that is structurally similar to the pipeline of an oil rig.

Its towering upper body is stabilized by a base plate, which serves as a nerve center and hub for several stilt-like fibers that can act as legs or flagella. This lower portion exhibits six-fold symmetry and is similar in appearance to insect and arachnid morphology. 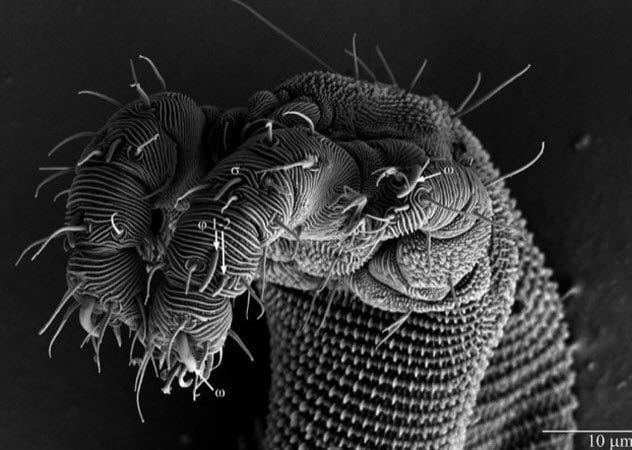 In 2014, entomologist Samuel Bolton discovered a bizarre new species of mite outside the main campus of Ohio State University. Described as both “dragon-like” and “wormlike,” it was strange enough to warrant the creation of a whole new genus.

The mite’s long, soft body is covered in exquisite arrays of interlocking ridges and scales. Its mouthparts are also distinct, with three segmented pedipalps (armlike appendages below the jaws) tipped with claws. The tenerphagus in its scientific name refers to its ability to tenderly pick up and manipulate the delicate microbes on which it feeds.

The evolutionary history behind its unique way of moving is still a mystery. Using hydraulic pressure, its body stretches and contracts in an accordion-like motion to maneuver through microscopic gaps.

It can be found living in the cramped spaces between grains of soil, avoiding other forms of life as much as possible. This includes members of its own species. Only females have been found, and they are capable of reproducing asexually. 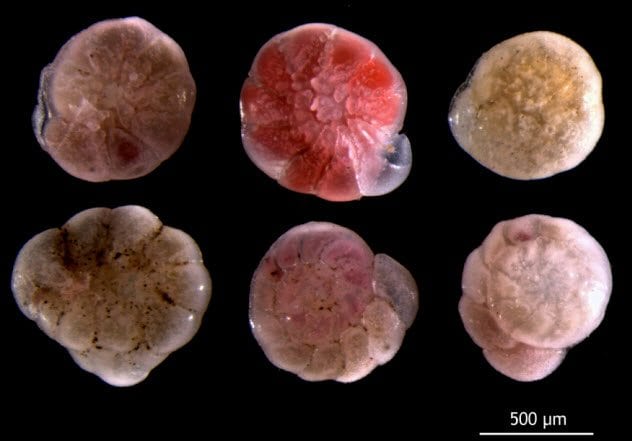 Sometimes living symbiotically with algae, tens of thousands of these little amoebas can be found in 1 square meter (11 ft2) of ocean. The name foraminifera means “hole bearer,” in reference to the series of tubes connecting the chambers of the shells they make.

These creations, called “tests,” are miniature superstructures. Despite being less than 1 millimeter (.04 in) in size, a foram’s test can be as simple as a few fused spheres or cathedral-like, with countless winding chambers and arches hidden within.

Forams also grow pseudopodia, which are temporary fibrous growths seen in other unicellular protists. Forams, however, will combine their pseudopodia into living nets that capture their prey. The growths making up the nets are hollow and can act as a rudimentary circulatory system. 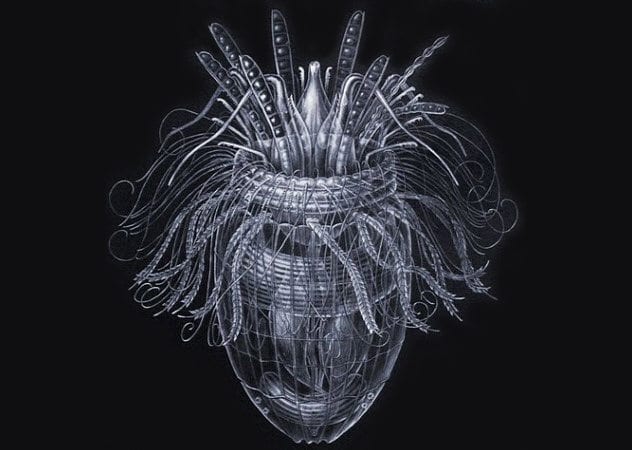 Referred to as “masters of miniaturization,” loriciferans are multicellular animals the size of most single-celled ones. A set of about 10,000 specialized cells allows them to have a disproportionately complex body.

Sensory spines called scalids blossom like a bouquet from its vase-shaped body. At the center of this spiny crown is a mouth-cone that unfolds and emerges from the abdomen like a telescope.

Loriciferans are also the only known multicellular animals that can live and reproduce exclusively in oxygen-free environments. In place of mitochondria, which require oxygen to produce energy, loriciferans have their own unique organelles that operate anaerobically. 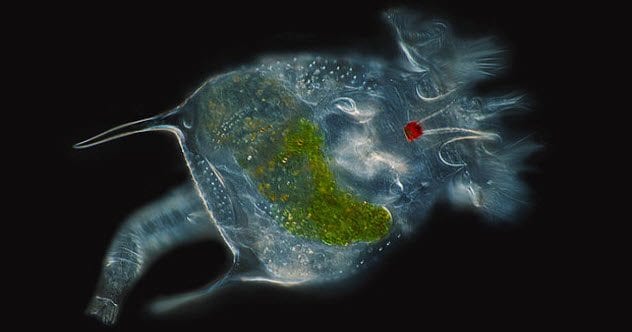 Rotifers, sometimes called “wheel animals,” are common microorganisms famous for their bizarre mouthparts. In front, two rings of cilia beat in synchronized motions to sweep food into the mouth. Behind these rotary organs lies a set of bony, highly articulated jaws.

A rotifer’s jaws are just as intricate. As zoologist Dr. Ross Piper puts it, “For an animal so small and with only around 1,000 cells in its entire body, this structure is amazingly complex; an assemblage of muscles, ligaments, and toothed plates (trophi) all working together to macerate the food before it’s digested.” 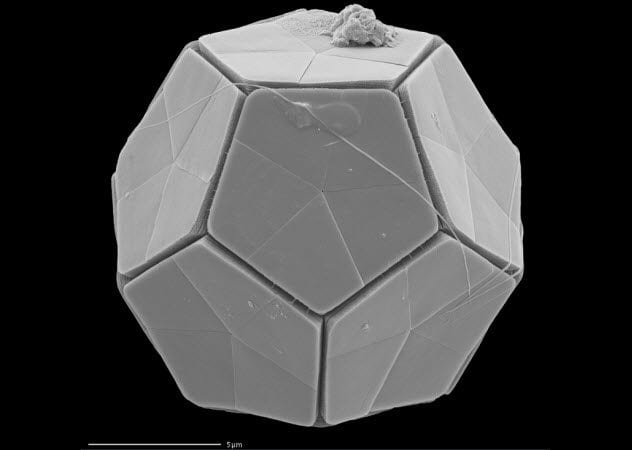 This object isn’t made from plastic or metal but from calcium carbonate. Known as a coccolith, this semi-organic structure is one of many kinds produced by single-celled algae called coccolithophores. Braarudosphaera bigelowii, the pentagonal species pictured above, is perfectly formed, almost as though it was factory-made. Twelve will cleave together to form a seamless dodecahedron about five microns in size.

Coccolithophores produce nanoliths in a variety of shapes. Most demonstrate unusual structural strength thanks to a series of interlocking crystals that support each face.

The central cell that creates this scaffolding is extremely precise. Each face starts out as a ring of calcite crystal, which is systematically grown from certain points so that the resulting framework meets to form a symmetrical prism. The finished product is much larger than the algae itself. For a human, producing something organically in one go would be like giving birth to a car wheel!

Bridget O’Ryan is a microbe of exceptional density that migrates in random patterns across a keyboard. This entire article is the product of coincidence, but we liked it and decided to publish it anyway.