When people hear the word “fossils,” they usually think of dinosaur skeletons and large bones. However, this is not entirely accurate. Fossils are the preserved remains of any living animals or plants that once thrived on our planet.

For thousands of years, people have been discovering fossils in rocks. But it was only recently that we understood their scientific value and studied them to better understand the world we live in and how it evolved. As more fossilized discoveries are made, our understanding of our planet, our environment, and even our humanity will be further enriched.

While excavating an area in Germany called the Messel Pit, scientists made an odd but exceptional discovery—ancient turtles having sex. The Messel Pit was once a deep volcanic crater that was originally mined for its oil.

Today, this area is considered by the scientific community as the richest site in the world “for understanding the living environment of the Eocene,” the period when mammals started to dominate our planet. Fossils of several animal species—such as honeybees, birds, bats, reptiles, horses, ants, and primates—have been found in the Messel Pit.

While examining the turtle fossil, scientists discovered that the ancient copulating turtles were only 20 centimeters (8 in) long. They were much smaller than their closest modern relatives, the pig-nosed turtles, which are found in Australia and New Guinea.

Further examination showed that the female was larger than the male. It also had a shorter tail and hinged lower shell. Experts estimated that the mating turtles lived 50 million years ago, making them the first and oldest animals with backbones to have been fossilized while having sex.

9 A Daddy Longlegs With An Erection

For 99 million years, a daddy longlegs trapped in amber sported an erection. Also called harvestmen, daddy longlegs are not spiders, but they are close relatives. Unlike spiders, harvestmen are not capable of producing silk. Though there is an urban myth that harvestmen are the most venomous spiders, this is not true. Harvestmen do not have fangs and cannot produce venom.

Discovered in Myanmar, this well-preserved harvestman is considered a significant discovery by scientists not only because the fossils of these arachnids are extremely rare but also because it’s “the first amber specimen visibly preserving the structure of the penis.” Unlike those of most spiders, the penises of daddy longlegs resemble those of mammals. When they do not use them, harvestmen hide their heart-shaped penises inside their bodies.

Experts have proposed two explanations as to why the harvestman sported an erection during the time of its fossilization. First, they suggested that the harvestman was mating with a female before it got trapped in amber. Second, they postulated that the arachnid was struggling to free itself from the amber and “its blood pressure rose and the penis was pushed out accidentally.”

Just like modern ants, ancient ants from 100 million years ago were hotheaded and prone to fighting. Scientists have discovered two ants in Myanmar that were well-preserved in amber while locked in mortal combat.

By nature, ants are social creatures. In fact, scientists believe that this trait is the primary reason for their longevity. But for the most part, ants are not pacifists. Many species are known to be aggressive toward members of other ant species or even toward their own cospecies from other colonies.

This discovery is fascinating because the two brawling ants possessed “mammoth, tusklike jaws.” Experts find this intriguing since modern ants do not have this physical feature. They suggested that the tusklike jaws were used by these ancient insects to stab their prey.

Though ancient ants had the fighting skills and social structures needed to survive, they still became extinct. This is a scientific mystery that continues to baffle scientists to this day. Perhaps future discoveries will yield the answer to finally solve this enigma.

7 The Oldest And Most Well-Preserved Nervous System

A place in South China called Xiashiba is well-known within the scientific community for preserving soft-bodied life. It is in this world-famous region that scientists unearthed the fossil of an ancient animal that resembled a shrimp.

This discovery is fascinating because the fossilized remains contained what scientists consider to be the oldest and most well-preserved nervous system. This remarkable discovery could help experts further understand the evolution of the modern nervous system.

The fossil belonged to a creature called Chengjiangocaris kunmingensis. This crustacean-like animal, which belonged to a group of arthropod ancestors called fuxianhuiids, existed roughly 520 million years ago during the Cambrian Period.

Ancient arthropods, such as the C. kunmingensis, can grow as long as 15 centimeters (6 in) and have as many as 80 legs. After conducting a thorough examination, scientists discovered that some structures of the C. kunmingensis‘ nervous system are similar to those of several modern worms.

Surprisingly, these nervous system structures are absent in modern arthropods. Experts found this discovery a bit intriguing because the C. kunmingensis is an ancient arthropod.

Fossils of insects having sex are quite rare. In fact, only 40 specimens have been discovered. With this in mind, it’s not surprising that scientists consider it a monumental discovery when they unearth a fossil of copulating ancient insects.

In 2013, scientists discovered the fossil of two copulating ancient froghoppers while excavating an area in Inner Mongolia, China, a region known for its abundance of well-preserved fossils. The fossil found in Inner Mongolia “[was] so good [that] the detailed structure [of the ancient insects], including the hair” can be clearly seen.

This discovery is extra special for scientists because it’s the oldest example of insect sex ever found. The copulating froghoppers were estimated to have lived during the Jurassic Period about 165 million years ago.

These ancient insects were in the middle of a lovemaking session when a volcanic eruption occurred. They belonged to the Anthoscytina perpetua species, and their fossilized remains clearly show the aedeagus (sex organ of the male) inserted inside the bursa copulatrix (sex organ of the female).

Ichthyosaurs lived during the age of the dinosaurs. These air-breathing sea creatures were excellent swimmers, had massive eyes and teeth-filled snouts, and grew as big as a bus. All these excellent physical features enabled the ichthyosaurs to climb up the food chain and become one of the top ocean predators during the Mesozoic Era.

Several ichthyosaur fossils were discovered in the past, and they showed that these sea creatures carried live embryos and not eggs. However, the fossils didn’t show how the babies exited the mother’s womb. Most air-breathing sea animals that bear live young, such as dolphins and whales, give birth to their babies tailfirst. 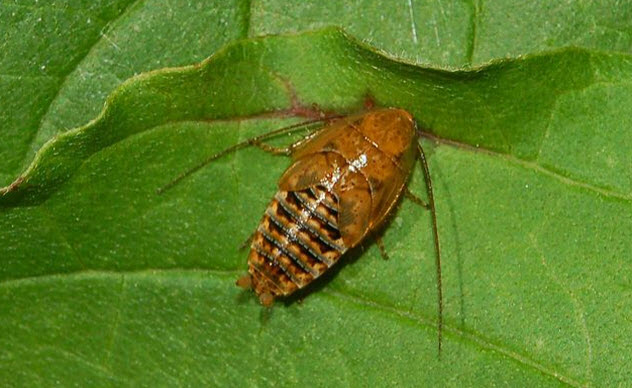 Ectobius is the most common type of cockroach found in Europe. When scientists discovered fossilized species of Ectobius in the Baltic region, they concluded that these insects had a purely Eurasian origin.

However, scientists have recently discovered the fossils of four ancient species of Ectobius along the Green River in Colorado. This discovery disproved the theory that the Ectobius genus originated in Europe because the fossils discovered in Colorado were five million years older than the ones unearthed in the Baltic region.

Experts do not have concrete answers as to why the American Ectobius disappeared from North America millions of years ago. It’s interesting to note, though, that the “Earth’s climate was warmer then, and the European Ectobius species that thrive in North America are more cold-adapted than their ancestors.” 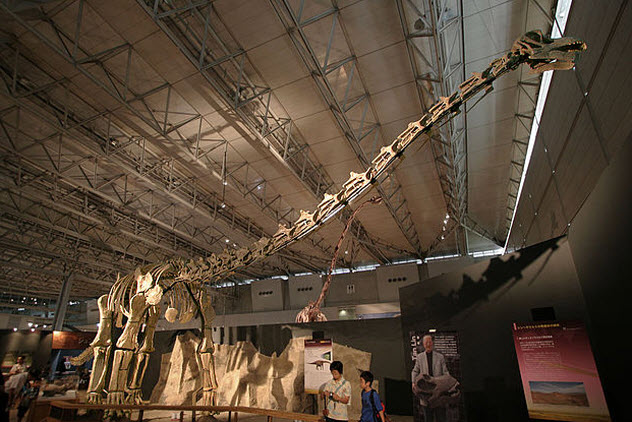 With more than 150 known species, the sauropods are considered to be the second most diverse group of dinosaurs on Earth. Although these ancient reptiles had gigantic bodies, they were plant-eaters, not predators.

Scientists had discovered the fossils of sauropods on all continents except Antarctica. But finally, after years of excavation, experts have found an incomplete, fossilized, middle-tail vertebra of a sauropod on the frozen continent.

Scientists discovered the dinosaur remains on James Ross Island. After conducting a thorough examination, they found that the fossil belonged to a certain type of sauropod known as a titanosaur. They arrived at this conclusion after studying the morphology and size of the fossilized dinosaur remains.

Titanosaurs were the dominant group of sauropods during the Early Cretaceous Period. However, certain aspects of their history—such as their dispersion and origin—remain unknown.

Scientists consider the discovery of the sauropod fossil in Antarctica a momentous achievement because it’s the first evidence of their existence on the frozen continent and it improves our understanding of “the dinosaurian faunas during the Late Cretaceous.” 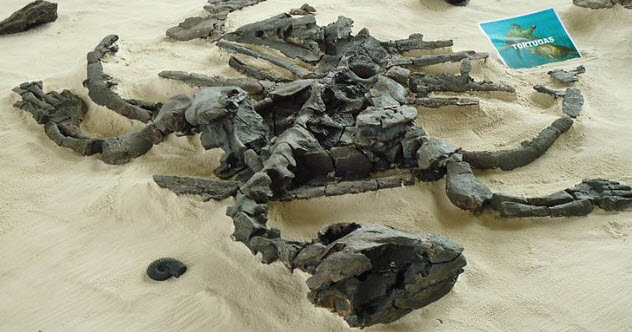 In 2007, hobby paleontologists made an astonishing discovery while excavating an area in central Colombia. They found the world’s oldest sea turtle, a well-preserved fossil from the extinct species Desmatochelys padillai sp., that lived 120 million years ago.

Unfortunately, scientists have not determined the exact time when the division occurred due to the lack of fossil records. This extinct fossilized sea turtle has been classified as the ancestor of green sea turtles and modern hawksbills. 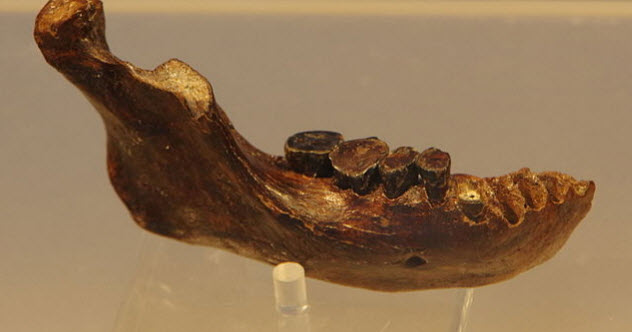 Aside from modern humans, several hominin species—namely Neanderthals, Denisovans, Homo erectus, and Homo floresiensis—coexisted in Asia thousands of years ago. Recently, scientists suggested that a new primitive human species might have roamed the Asian continent with these other hominins. The fossilized lower jaw of an ancient unknown hominin, dubbed Penghu 1, was found off the western coast of Taiwan.

The fossil was accidentally discovered by a fisherman who later sold it to a local antique shop. Thankfully, a customer noticed its evolutionary significance and submitted the fossil to Taiwan’s National Museum of Natural Sciences. After conducting a thorough analysis, scientists discovered that the jaw belonged to an unknown hominin who lived between 10,000 and 190,000 years ago.

Interestingly, Penghu 1 resembles a 400,000-year-old fossil from Hexian in southern China. This observation led scientists to propose that the fossils might have belonged to a distinct group of archaic humans. However, they were quick to point out there is not “enough evidence to say whether it is a new species or not.”