Before being reprinted endlessly and dispensed to all of us by our teachers, each classic piece of literature was a manuscript covered in scribbles—or maybe just a single image that flashed through the author’s mind one day.

The doodles and scribbles of famous authors can be even more fascinating—and more revealing—than the finished works for which we all know them. Many famous authors were avid doodlers or even artists in their own right and left plenty of weird artifacts in their notebooks for us to puzzle over. 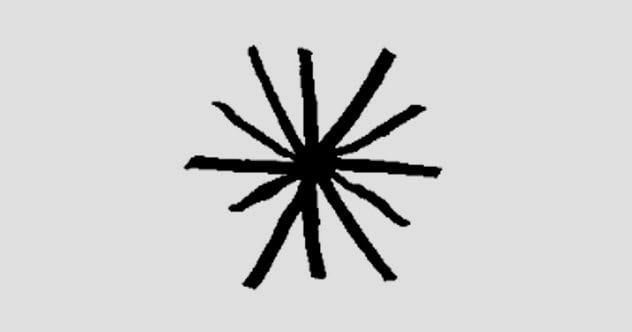 In his novel Breakfast of Champions, influential satirist and science fiction writer Kurt Vonnegut included a series of deliberately crude illustrations to accompany the story, the most famous of which is a drawing of an anus. Lovingly rendered with a felt-tip pen, his depiction could easily be mistaken for a hastily scribbled asterisk.

Other doodles of note include pyramids, dinosaurs, swastikas, a bucket of fried chicken, and the structural formula for a plastic polymer. In the novel’s preface, Vonnegut states that the book was written as a present to himself for his 50th birthday.

In his own words: “I am programmed at 50 to perform childishly. [ . . . ] To give an idea of the maturity of my illustrations for this book, here is my picture of an asshole.” 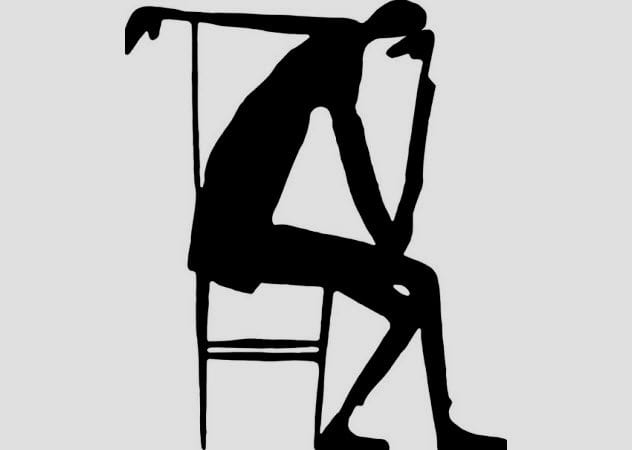 While working as a lawyer for the Workmen’s Accident Insurance Institution in Prague, Franz Kafka would sometimes draw the various disfigurements suffered by his clients due to poor working conditions.

In addition to making these drawings, he was a devoted doodler, though he always tried to hide this fact from his friends and coworkers. Despite this, many of these doodles were archived—against Kafka’s wishes—by his best friend, Max Brod.

One friend, Gustav Janouch, claimed that Kafka would panic and quickly destroy his drawings if someone discovered him in mid-doodle. Almost all his surviving doodles feature lanky men in silhouette or abstract figures in motion illustrated with expressive, sweeping curves. One of the more well-known examples of these is his drawing of a man slumped over his desk in exasperation. 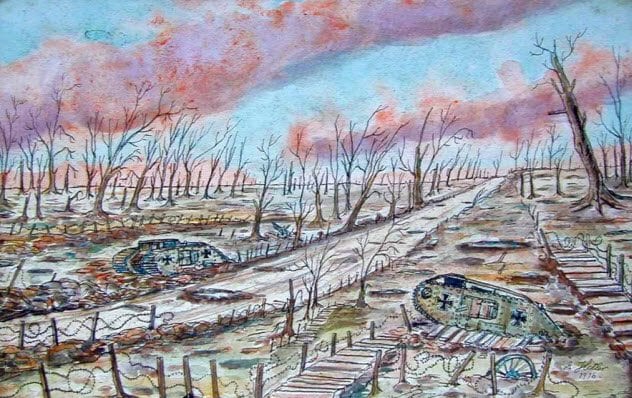 Although the story of Adolf Hitler’s early foray into the art world has basically entered the realm of common knowledge, he is known more for his landscape paintings than for his other works.

Unknown to some, Hitler was an avid lover of dogs and went through a phase where he drew formal portraits of them in pencil. So if you ever come across a tacky portrait of a German shepherd in your grandfather’s basement, be aware that you may have discovered an original Hitler.

Unlike his scenic landscape paintings and pet portraits, a few of his works have a rougher, grittier look to them. One example is Tank Battleground (pictured above), which features a scene of carnage and scorched earth rendered in an informal style, similar to something seen in a comic strip. 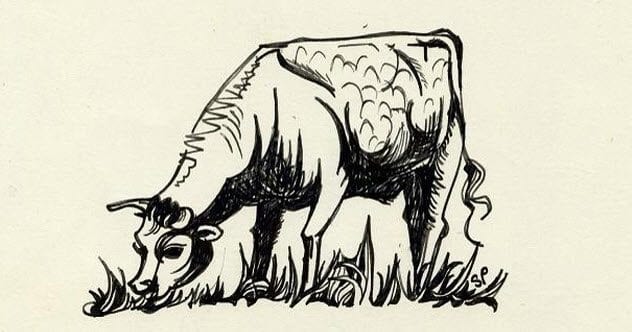 Sylvia Plath chronicled the trials of living with mental illness through poetry. In fact, there is a phenomenon known as “the Sylvia Plath effect” that points out the statistical tendency toward depression in poets.

In contrast to her poetry, Plath’s portfolio of pen-and-ink drawings reveals a more serene side to her artistic vision. For the most part, they consist of seemingly mundane subjects like boats, umbrellas, and dairy cows.

On drawing her first cow, Plath remarked, “I got a kind of peace from the cows; what curious, broody looks they gave me; what marvelous colossal shits and pissings. I shall go back soon; I shall do a volume of cow drawings.”

At one point, she had hoped to develop a style that was simplified and “childlike” in design and even aspired to become an illustrator for The New Yorker. Unfortunately, her suicide in 1963 prevented this.

6 Leo Tolstoy’s Around The World In 80 Days 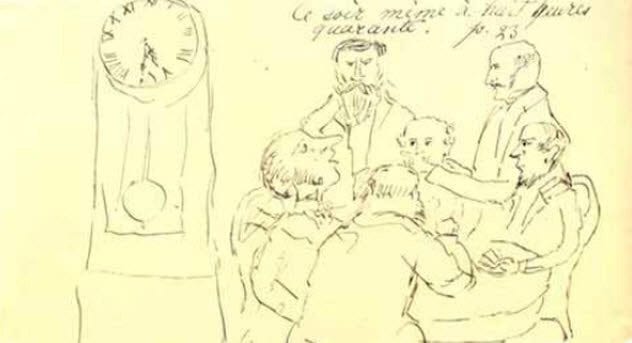 Leo Tolstoy was a huge fan of Jules Verne’s Around the World in 80 Days. Tolstoy loved reading it to his children. When he couldn’t find any official illustrations to show the children during storytime, he made some pictures of his own. Each day, he would set aside time to draw visual aids to accompany the chapter he would be reading that night.

Tolstoy also wrote and illustrated a simple book of ABCs for local peasant children who didn’t have access to a formal education. Historians have also found a sketchbook he produced during his time in the Caucasus region of Eurasia. This book is strictly a work of realism and features detailed depictions of the various Russian Caucasian peoples. 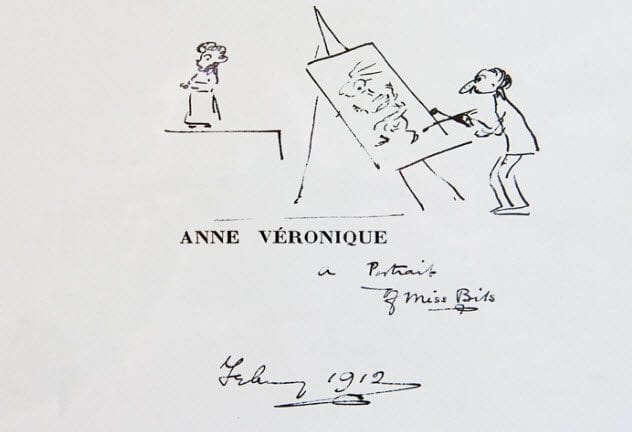 In his spare time, H.G. Wells, the author of The War of The Worlds, produced around 650 doodles for his wife. Wells affectionately called these little pictures “picshuas.”

The majority were just cartoons showing the couple and their children going about their day-to-day lives. Others were satirical depictions of his own wrongdoings as a husband (notably his adultery). He used these pictures as a way of asking for his wife’s forgiveness.

At times, Wells took the opportunity to depict his wife as his personal dictator, always pushing him toward achieving greater status in the literary world—whether he was on board with her plans or not. He sometimes drew her as a giant airship preparing to drop bombs on him for his marital sins. 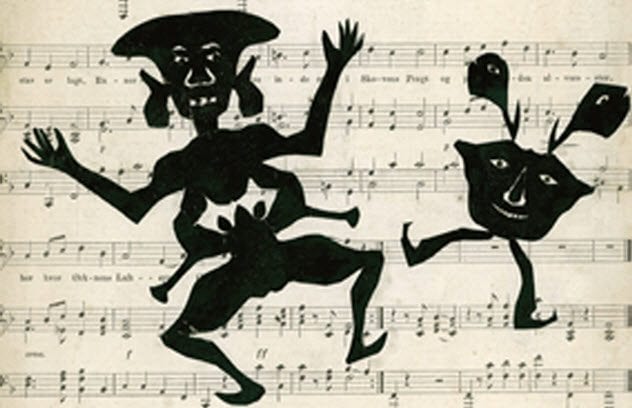 Hans Christian Andersen, the man who penned fairy tales like “The Little Mermaid” and “The Ugly Duckling,” was also well-known for his sketchbooks. During his travels throughout the world, he logged all the interesting things he saw (along with any local fairy tales he had discovered) and then republished them as travel guides.

Andersen had another remarkable ability. In a matter of minutes, he could cut scraps of paper into the shapes of bizarre characters and psychedelic scenery. Hundreds have been archived. In one, a woman with bagpipes for breasts dances across a sheet of music.

Some are quite intricate, such as his vase with flowers, while others are quite simple, like his picture of a man wearing boots on his hands. He also produced paper sculptures in this style, such as this patterned rocking chair. 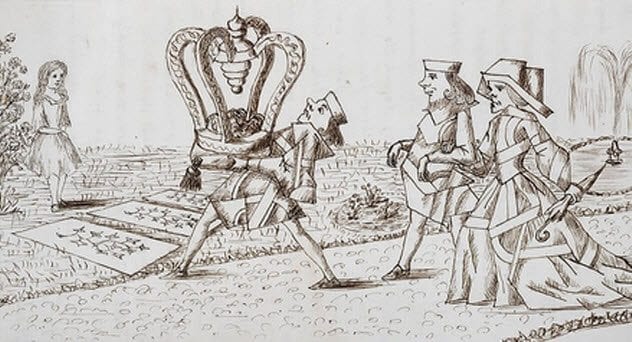 Under the pen name Lewis Carroll, the mathematician Charles Dodgson wrote several popular series of children’s books. He is less remembered for having also illustrated many of these stories. The original manuscript for Alice’s Adventures in Wonderland featured 37 of his own ink illustrations, most of which were as surreal as the story itself.

Carroll’s original manuscript was painstakingly rendered and featured handwriting that was almost precise enough to be mistaken for printed words. Still, he wasn’t a professional artist, and he tasked political cartoonist John Tenniel with making new illustrations for the final draft. 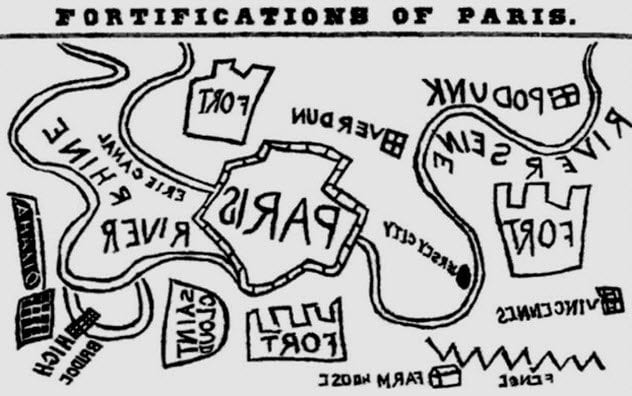 While he was the editor of the Buffalo Express, Mark Twain slaved over a wooden printer’s block to create a satirical map of Paris for the paper’s world news segment. Without further review, he had this hilariously crude rendition of the city published on the front page.

The map was entirely inaccurate, featuring notable Parisian sites such as Omaha, the Erie Canal, and “a farmhouse.” The finished design, when printed, was also backward. Perhaps Twain didn’t realize that printing blocks always result in a reversed final design. Or maybe he did it on purpose because he thought it would be funnier.

Beneath the image, Twain also included fake commendations for his masterpiece. Brigham Young raves, “I cannot look upon it without shedding tears.” Napoleon remarks, “It is very nice large print.” 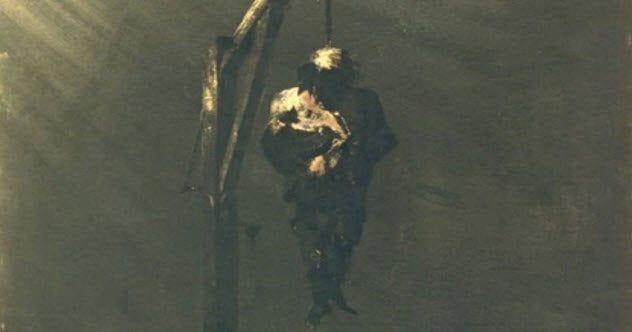 After being exiled to the Channel Islands, Les Miserables author Victor Hugo began experimenting with the visual arts. His works ranged from simple but expressive pieces made from inkblots or coffee stains to exquisitely dark masterpieces like Town with a Broken Bridge, The Snake, or Justicia.

His paintings received little attention at first. But art historians now consider Hugo to have been ahead of his time in his ability to create such surreal atmospheres before the true advent of abstract art.

As we’d expect of Victor Hugo, some of these pieces were also a form of social commentary. Most notably, he created the piece Ecce (“Behold”) after the hanging of abolitionist John Brown. Hugo had campaigned against Brown’s hanging. After his campaign failed, Hugo sold prints of Ecce to raise funds for charities that sent “medical supplies to soldiers in the Civil War.”

Bridget O’Ryan is a crude doodle on a cocktail napkin that has gained sentience.