Reports of octopus attacks were prevalent in the past when people believed that the octopus was a gross and evil creature of the sea. They often called it the devilfish because of its looks. They had no idea just how intriguing and intelligent the octopus really is. 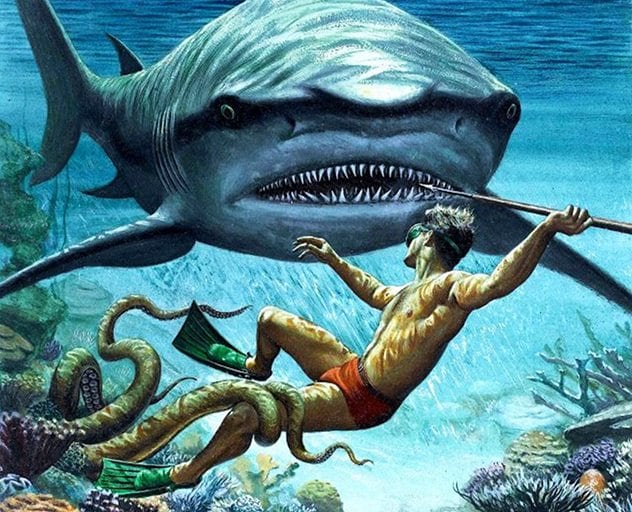 It is almost ironic that a diver named Inkster would be attacked by an octopus, but that is exactly what happened. In 1881, Mr. Inkster was in roughly thirteen feet (four meters) of water at the Kingston jetty in Australia when an octopus attacked him. Fortunately, he had a spear with him because shark attacks were common. He ran the spear through the octopus but was unable to pull the spear back out again because the tentacles held fast to it.

Inkster escaped and returned to the surface of the water. He grabbed a crowbar and went down into the water again, this time finishing off the octopus.

The octopus was brought up and measured ten feet (three meters) “between the extremities of its feelers.”

9Brother to the Rescue 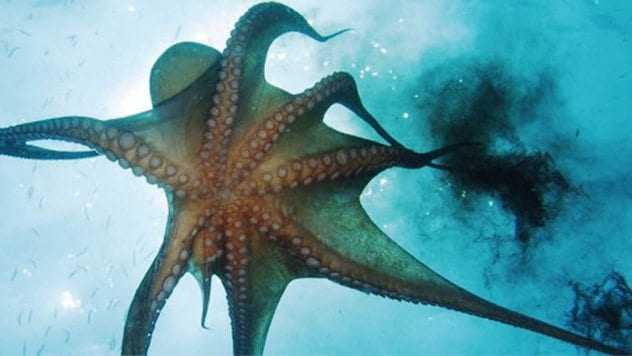 In 1928, a fourteen-year-old girl and her twenty-two-year-old brother went for a swim at Stanley Bay beach in New Zealand. The tide was out, so she and her brother began to wade far out into the water when the girl thought she stepped on a branch. The branch rose up and grabbed her legs. It pulled the girl under the water and the girl, struggling, managed to scream out for her brother to help her.

Her brother rushed through the water just as she was pulled under again. A cloud of black ink filled the water, and a tentacle reached up and grabbed the brother’s thigh. The young man escaped from the tentacle and grabbed hold of his sister. A tug-of-war ensued and soon the young man had freed his sister from the deadly tentacles.

The octopus escaped with its life, but it was noted that it was probably a small octopus and that the young man had stated that the one tentacle was only about four feet (1.2 meters) in length.

8A Not So Loving Embrace 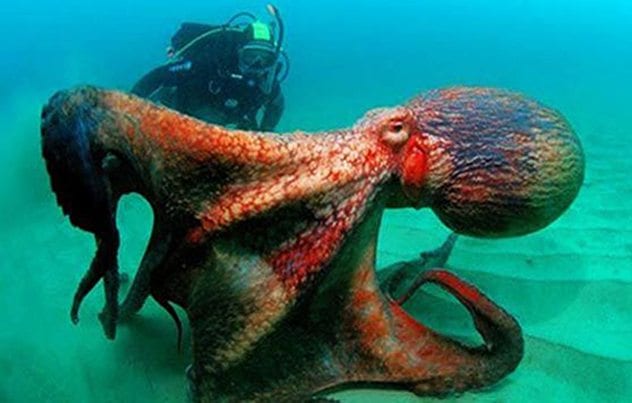 A diver was working to help remove an underwater wreck off the coast of New Zealand in 1891 when an octopus wrapped its arms around the man and began to squeeze him. The diver was able to signal the men on the surface to pull him up, which they did.

The octopus was still wrapped around the man when his head broke through the surface of the water. Being near the boat ladder, the octopus reached out to it and pinned the diver, crushing the air out of his lungs. The other men attacked the octopus and eventually killed it.

Incredibly, this was the second time the diver had been attacked by an octopus. 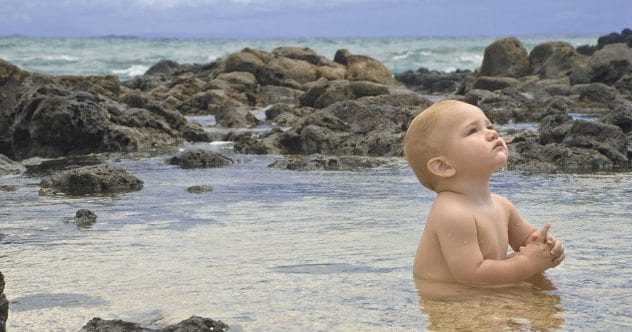 Thinking it would somehow be safe, the parents of a twelve-month-old baby placed their child in about six inches of water at The Spit, Australia, in 1919. As the baby played about in the water, an octopus approached. Fortunately, the parents returned at this point and lifted the baby out of the water before any serious damage was done to the child. The attacking octopus had only a three-foot (91 cm) span, but it was large enough to pull the child under the water.

6Use What You Have Got 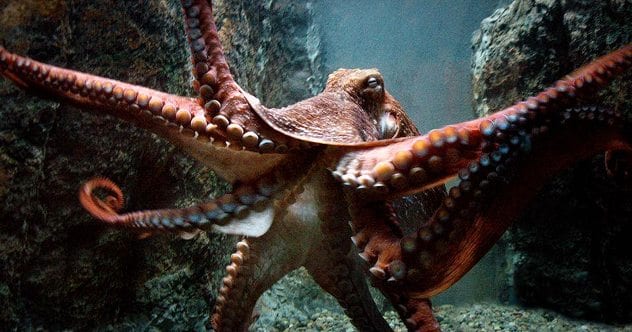 Imagine being in the water, being grabbed by something, and everyone in view being too frightened to lend you a hand. That is what happened to James Antone in 1954, California. The large man, weighing 265 pounds (120 kg), was in the deep water when something grabbed his arm. He began to spin around, but then other tentacles reached out and grabbed hold of him.

Antone tried to rip the tentacles off of him, but it proved to be impossible. His only option was to grab the head of the octopus and head back to shore with the whole octopus. People witnessed the strange sight, but every one of them was too scared to help Antone out. Upon reaching a rock, Antone beat the creature’s head against the rock until it let him go. The octopus weighed 40 pounds (18kg), and its tentacles were five feet (1.5 meters) long.

5Pulled Down into a Hole

Gordon Hastie was fishing one night in 1952 off the coast of Pepin Island when his line got stuck. In an attempt to free the line, he jumped into the waist deep water and began to follow the line until something grabbed hold of his ankle. He was pulled down under the water and into a deep hole. To make matters even worse, a black, inky cloud filled the water.

Hastie struggled against the octopus and managed to pull out his knife. He slashed at the tentacles and fought it as best he could until it lost its hold on him. He swam to the surface, no doubt glad to be alive, and saw that he had lost a small portion of his finger to the beak of the octopus.

4Keep Hands Out of the Tank 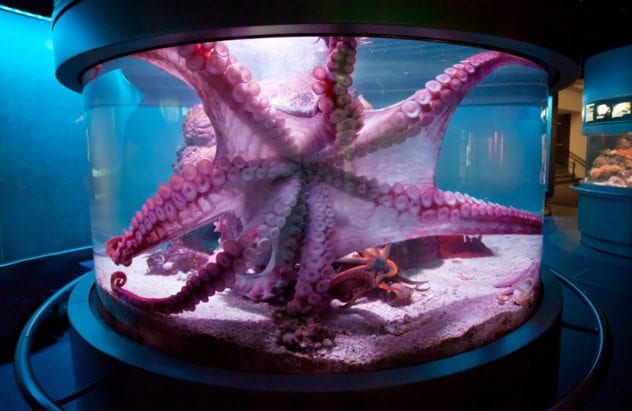 The local fishermen of Le Lavandou, France, caught a giant octopus and decided to give the vacationers a thrill. The octopus was put into a large tank and was exhibited to the people. Crowds gathered around the tank to see the octopus and a boy, a mere five-years-old, put his hand into the tank.

The octopus wrapped a tentacle around the boy’s wrist and began to pull him into the water. The boy’s mother fainted, and women screamed, according to the 1932 newspaper account. Fishermen tried to pull the tentacle off the boy’s wrist without effect. A young man, with knife in hand, slashed at the tentacle and, finally, the boy was released.

The boy lived, but we can only assume that the octopus eventually died in the confines of the display tank. 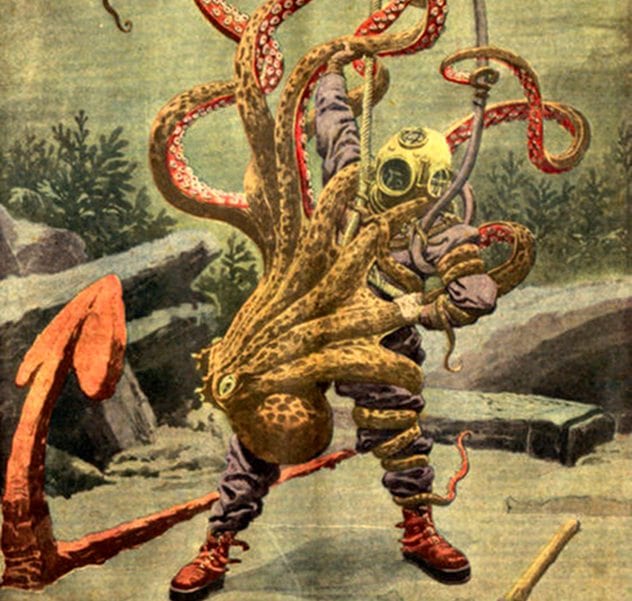 Charlie Edwards made his first diving suit when he was only fifteen. He went on to design several more diving suits in the hopes of creating a suit with profitable commercial applications.

In 1938, he went into the water wearing his newest design. This lightweight suit was topped with a copper helmet. Extra weight could be strapped around the waist, and the special sandals he designed had lead weights inside of them.

As he walked along the bottom of the water, he frightened an octopus. It reacted by coiling itself around the copper helmet, obstructing Edwards’s view. To top it off, an electric ray stung his foot, and he lost his lead sandal in the harbor.

Edwards survived the ordeal and came up out of the water with the octopus still wrapped around his helmet. 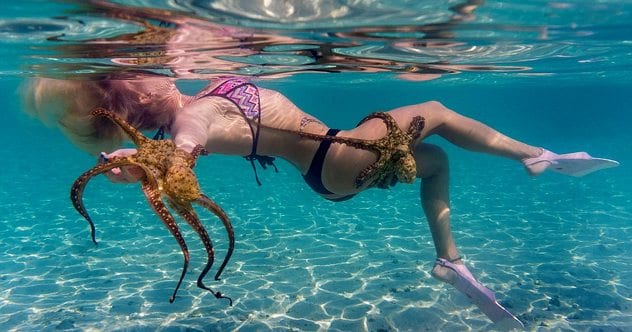 Mrs. Tattershall-Dodd undoubtedly never forgot what happened to her at Pardigon beach, France, in 1922. She and three of her friends walked along the shore to a rocky cove. Her friends waded close to shore, but Mrs. Tattershall-Dodd decided to go out further into the water until something reached out and grabbed one of her legs. She tried to pull her leg out of the grip, but more tentacles reached up and held both of her legs above the knees.

The woman hollered to her friends and one came rushing to her with a walking stick. The weapon holder peered down into the water and saw the large head of the octopus. With that, the friend nailed the octopus in the head with her walking stick over and over again until it let poor Mrs. Tattershall-Dodd go.

A party later returned to the spot and killed the octopus. It measured five feet and four inches (1.6 meters) from one tentacle to the other.

1It Grabbed Hold of the Mast 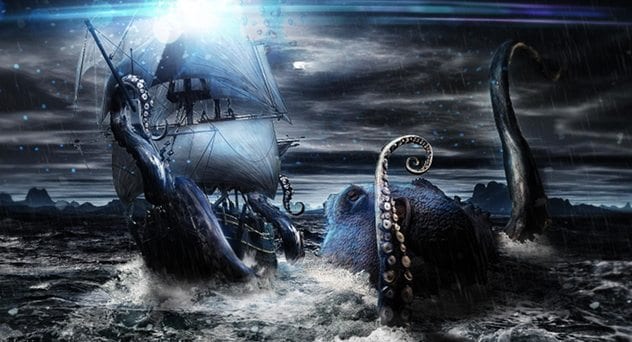 While out in his boat off of St. Brelade, Jersey, 1922, a fisherman got quite a scare. A tentacle reached up out of the water and circled the mast of his fishing boat. Then another tentacle came up and grabbed the fisherman’s leg. The boat tilted and threatened to turn over, but the fisherman got hold of his senses just in time. He drew his knife and began stabbing the tentacle that was holding him.

Another fisherman saw what was happening and quickly came to the rescue. He beat the tentacle that was holding the mast until the boat was free and clear.

There are many old reports of fishermen going missing, and some fishermen believed that many of the missing were taken by the octopuses.