Genghis Kahn and his Mongolian hordes swept through Asia, slaughtering and conquering a huge part of the world. No army could stand in their way. By the time their conquests had ended, they had wiped out a tenth of the world’s population.

It took an intense and brutal army to pull it off. Fighters in the Mongolian army did not have the option to be weak. Life, in a Mongolian horde, meant giving up even the most basic of comforts and doing some absolutely horrifying things. 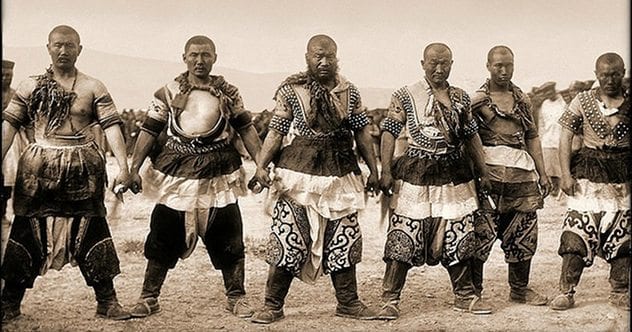 The Mongolians of Genghis Khan’s time believed that contaminating water would anger the dragons that controlled its cycle. They feared that, if they dirtied the water, the gods would send a storm to destroy their homes—and so they did not wash anything.

Bathing in running water or washing your clothes was prohibited. Most of the Mongolian fighters would not even change their clothes. At most, they would beat their coats to get the lice out and put them right back on. They would wear the same thing, day after day, until it literally rotted off and could not be worn anymore.

They did not wash the dishes in water, either. Instead, they would wash their plates in the left-over broth from the last meal. Then they would pour the used broth back into the pot and cook their next meal in it.

It was smelly—but they took pride in that. There was a power to their stench. It would be considered an honor if a great Khan gave someone his cloak, not just because he had his clothes, but because he could now carry the Khan’s stench.

9They Learned to Ride Horses When They Were Three

As soon as a Mongolian could walk, they learned to ride. Every family had a horse, whether they were wealthy or poor, soldiers or farmers. Even shepherds would take care of their flocks on horseback. They had to get ready young—so they started when they were three years old.

The Mongolians had custom saddles made for children, designed with a few extra safety features to make sure they did not get hurt. They wanted their kids to start practicing as soon as possible. It made a huge difference. When Europeans saw them, they wrote back that the little girls in Mongolia were better horse riders than most European men.

The kids learned archery, too. As soon as they started riding, they were given tiny bows and taught to shoot. For a Mongolian in the time of the great Khans, riding a horse and shooting a bow were as essential as learning to walk.

8They Drank Blood from a Vein Cut in Their Horses’ Necks 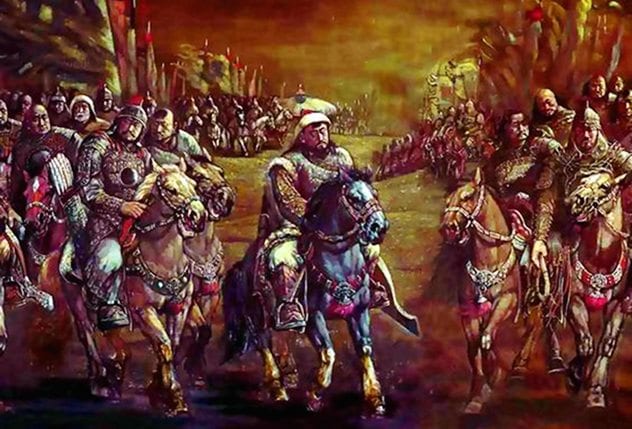 The Mongolian army covered incredible distances. In a single day, they could travel 80 miles (129 km), a distance that, in their time, was completely unheard of. It took intense and vicious riding to do it, and they did not have time to stop for food.

To make the journey possible, they would put raw meat on their horses’ backs. It is believed that this was to tenderize the meat, so they could eat it on the go, although that is debated. Some now believe that the meat was for the horse, meant to help heal their sores while they pushed through incredible treks.

The horses helped them get drunk, too. They would ride female horses whenever possible and would milk them when they stopped. Then they would take that milk with them, letting it ferment into liquor for the road.

7They Cut Open Animals’ Chests to Butcher Them 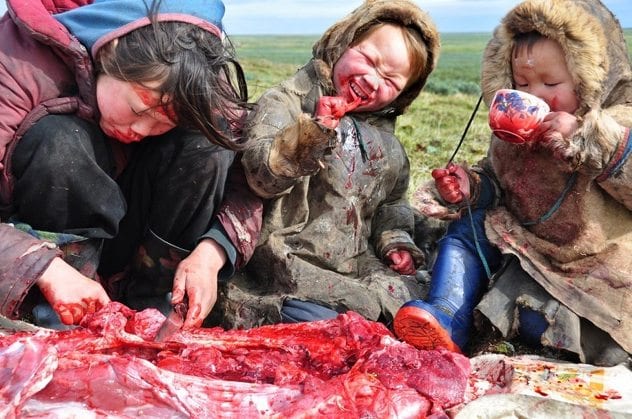 Mongolians barely ate vegetables. From time to time, they would gather a few wild plants or eat some food that had been offered to them by a surrendering army, but they mostly relied on meat and dairy.

They would tear out all of its internal organs and cook them up. Every part of the animal’s body would be put to use, usually boiled in a pot of broth, but, on special occasions, cooked on a skewer. The blood would be drained out of the body and worked into sausages.

Usually, they ate mutton, but they would eat horses when they could. Horses were usually saved for special occasions, but they ate whatever horse meat they could. According to one missionary who went to Mongolia, they would even eat the afterbirth of mares.

6A Mongolian Man Could have 30 Wives 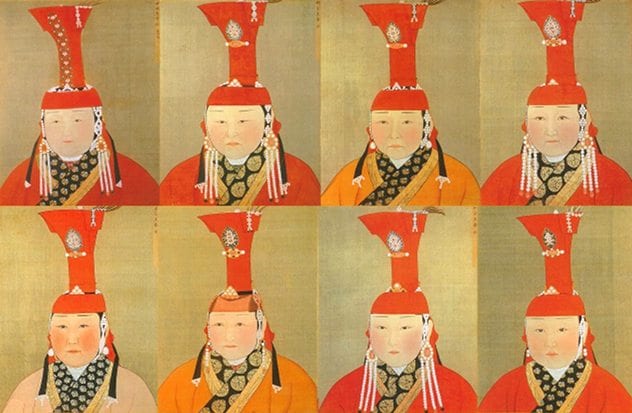 The Mongolians were strict about extra-marital sex. If a man was caught with a married woman, he could have his lips cut off. If they were in bed together, he could be killed. And if he was caught with an unmarried virgin, both the man and the woman would be put to death.

As long as you married them, though, a man could have as many women as he wanted—or, more accurately, as many as he could afford. He would have to pay a dowry for each one, and he would be expected to provide her with her own tent to live in. Some Mongolian men had thirty wives, and the Khans had hundreds.

The women just accepted that this was how life was. It is claimed that, after some men spent the night with his wife, he would invite in all of this other wives to share a drink together. 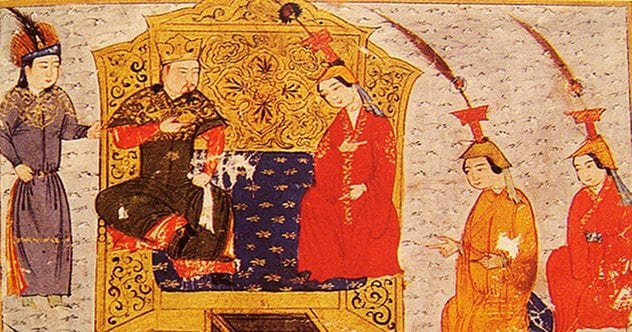 When a Mongolian’s life came to an end, they made sure that his wives were taken care of. His land and his possession were divided up among his sons, with the best bounty going to the youngest. He would get his father’s home, his slaves, and also his wives.

The boy would not be expected to marry his own mother, but he would be expected to provide for all of his father’s other wives. And while there were no rules saying he had to, he was allowed to take them as his own. It was not uncommon for a young man who had lost his father to make his stepmothers his wives and bring them into his tent. 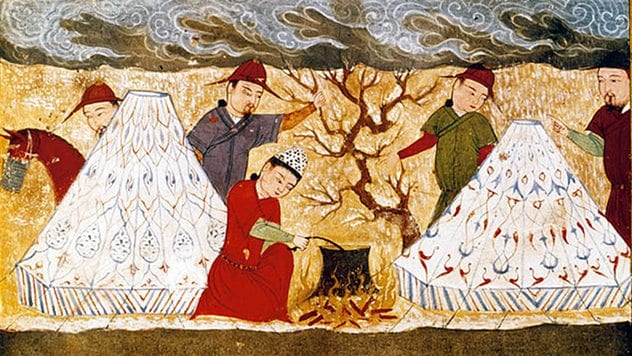 One of the main ways the Mongolians became such effective killers was by using psychology. They could not have conquered so many nations by fighting alone—they needed to get as many as possible to surrender without having to waste the life of their men.

No matter the circumstances, they would hide their numbers. If the opposing army was bigger than theirs, they would put dummies on spare horses or light extra campfires to seem more imposing. If their army was bigger, they would ride their horses in single-file, with branches tied to their tails to mask them in a cloud of dust.

The key to their psychological terror was their reputation for brutality. They needed their enemies to believe that if they did not surrender, every person in the city would be horribly killed. They did not use any tricks to get that reputation—they really did it.

If a city did not surrender, the Mongolian horde would massacre every single person inside. They rounded up the women and children and slaughtered them all. Sometimes they even rounded up the cats and the dogs and killed them for good measure. Their heads would be removed and they would make a pyramid of their skulls to let anyone who passed by know what happened if you angered a Khan.

The most horrible thing was what they did to pregnant women. According to an Arabian writer, the Mongolians would not stop at killing them. They would rip open her stomach and kill the unborn baby inside of her.

2They Had to Kill Nobles without Spilling Blood 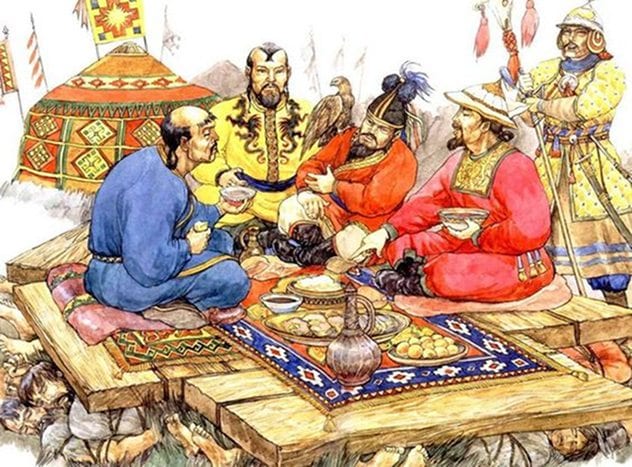 The Mongolians believed that blood contained a person’s spiritual essence. They did not dare spill the blood of a nobleman, believing it would defile the ground on which it fell. So, when they killed royalty, they had to find other ways to do it.

Usually, noblemen would be suffocated or drowned. If a member of the Khan’s family betrayed him, he would usually be rolled up in a carpet and thrown in a body of water. Sometimes, though, they got creative. Guyuk Khan took care of one of his rivals by sewing every orifice on her body shut and pushing her into a river.

They had to get creative with enemy nobles, as well. In one case, they trapped Russian princes under a board and held a feast on top of them to suffocate them without spilling their blood. In another, Genghis Khan had a man killed by pouring molten silver into his eyes.

The Mongolian army might have been the first to use biological warfare. While they swept into Europe, they were hit by the Black Plague—and they decided to use it to their advantage.

Their enemies had holed up inside of the city of Caffa, where the Mongolians had them surrounded. When the Black Plague started killing their people, though, they realized they could not stay forever. They wanted to make the biggest impact they could before they left—so they threw their dead over the city walls.

Any Mongolian who died of plague was put on a catapult and sent flying over the walls. On the other side, the people tried to get rid of these bodies by throwing them into the sea, but this just tainted their water supply. Soon, the plague had spread throughout the city.

A few people fled over the city walls and ran further west, but it was too late for them. They were already carrying the plague, and, as they ran out westward, they spread it through Europe.