Our hearts ache every time the peace and tranquility of our daily lives are shattered by extremist Islamic terrorists. When an atrocity hits London, Paris, or New York, the world listens. We band together, we cry together, and we unite in a promise to try to keep terror from ever again rearing its head in our backyards.

But these tragedies happen even more often than we realize. The horrors we suffer are only a shadow of what life is like in other parts of the world. In countries where Islamic militants live next door, terror is not just an unexpected interruption of peace—it is a threat that looms every day.

10The Massacre of the Al-Shaitat Tribe: Syria 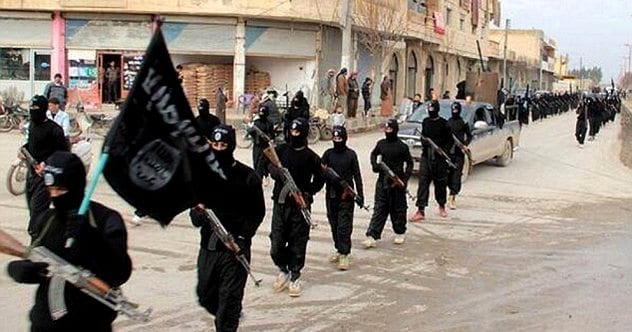 In 2014, a tribe in Abu Hamam, Syria, tried to rise up against ISIS—and paid for it with the lives of more than 900 people.

It started when a man was dragged out into the streets and publicly whipped by ISIS members for smoking a cigarette. The man’s brother, furious that such a small crime would meet such humiliation, got a gun and shot the next ISIS patrolman he saw.

ISIS arrested the shooter and had him publicly beheaded, trying to send a message to the Al-Shaitat that they needed to obey—but they did not listen. Instead, the people rose up against the Islamic state and chased ISIS out.

Shortly after, however, ISIS came back with reinforcements. They blasted the town with artillery for three days straight before moving in. Then they rounded every male older than 15 and killed them all.

Some were beheaded, some were shot, and some were crucified. ISIS would line people up on the road and behead them in a line. Then they would taunt the living by swinging the severed heads of their friends before them, and telling them that they would be next.

The few who managed to escape have learned to hate. “Now we hate everyone who prays,” a survivor said. “We will never forget to avenge.” 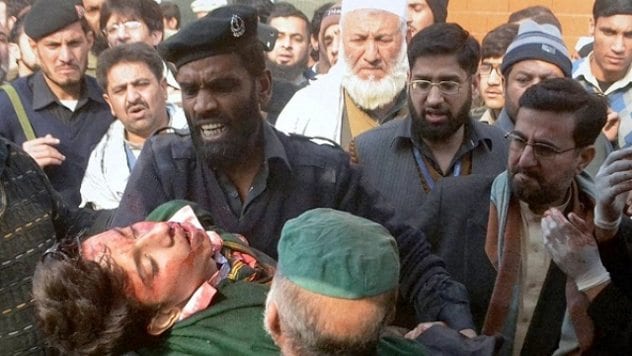 On December 16, 2014, at 10:00 a.m., seven Taliban terrorists walked into a public school and went from classroom to classroom, massacring children.

The men came in through the back door, wearing suicide vests and automatic rifles. Wherever possible, they pretended that they were going to take hostages and promised that they would not hurt the children—but this was a just a way to keep the children from running. They indiscriminately opened fire on every child they saw. Some of these children were only eight years old.

The children who survived had to go through incredible horrors to get out alive. One 13-year-old girl played dead, lying next to the dead bodies of her classmates, so that the terrorists would pass her by. She was the only person in her class to survive.

They targeted the school because most of the children’s parents were soldiers. “The government is targeting our families,” Al-Qaeda claimed. “We want them to feel the pain.” But whatever their reason, there was no justification for what they did. By the end of the day, nine adults and 132 children were dead.

On March 20, 2015, hundreds of people gathered together at the Badr Mosque in Sana’a, Yemen, to pray. They were followers of the Houthi faith, a group that had been in conflict in Shia extremists. For their beliefs, more than a hundred of them would die.

While they were making their prayers, a man trying to enter the mosque was stopped at the gate. The guards had spotted the bombs strapped to his vest. They tried to stop him—but he detonated his vest. The people in the mosque tried to escape, but, hidden among them was a second bomber. In the throngs of the fleeing crowd, he detonated his vest, killing dozens of people.

Two more bombers attacked another mosque on the same day. In total, 137 people were killed, and 345 more were injured, all while they were gathering peacefully to worship at a mosque. The government blamed Al-Qaeda, but ISIS took credit for the attack, and they warned that there were more to come. This, they said, was “only a part of the coming flood.” 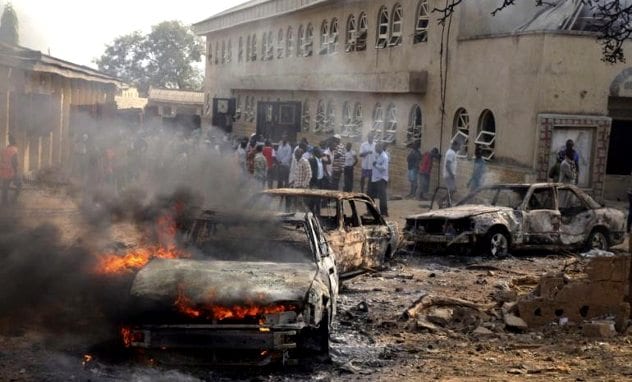 On July 1, 2015, Boko Haram terrorists walked into a mosque in Baga, Nigeria, with automatic rifles and opened fire. This mosque, they felt, was too moderate and accepting. And so they gunned down every person inside—men and women, adults and children alike. By the time they had stopped shooting, 145 people were dead.

This was horrible—but it was only one attack in a week-long series of Boko Haram massacres across the country. Boko Haram had united itself with ISIS, and ISIS had ordered them to spread chaos and death throughout Ramadan. Boko Haram would oblige them, killing more than 200 people over a few days.

The day before, they had gone into a village and killed 48 more people. The day after, they would send girls carrying explosives into the marketplace as suicide bombers. And the day after that, a Boko Haram militia would drag men who had refused to join them out of their homes and into the prayer grounds, where they would slaughter them like animals. 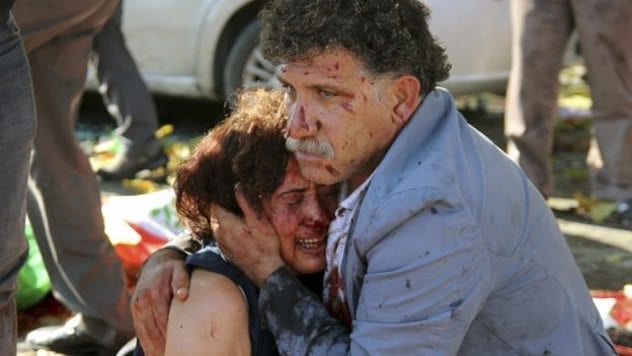 The demonstrators were holding hands and singing outside the main train station when two explosions went off. Two suicide bombers had detonated bombs, willing to sacrifice their own lives so that they could massacre young people who were calling for peace.

“We fell to the floor and there was blood and flesh splattered everywhere,” one survivor said, describing the scene. “When I turned around I saw a lake of blood and bodies. I couldn’t tell who was dead or alive.”

When the police arrived on the scene, according to some witnesses, they threw tear gas into the crowd, apparently afraid that there might be another bomber among them. Some claim that the police stopped people from carrying away their injured friends and kept ambulances from getting to the scene.

When the dust and the gas had settled, 95 people were dead and 246 injured in the worst terrorist attack in Turkey’s history. 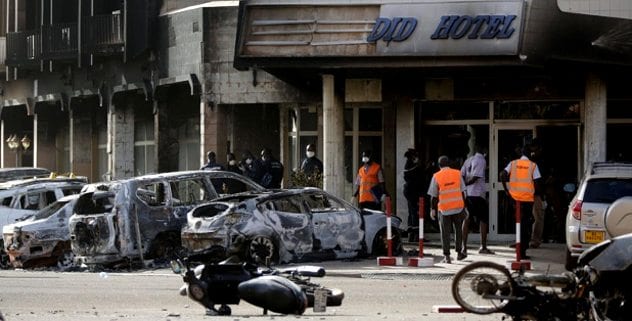 Throughout one long night on January 15, 2016, Al-Qaeda terrorists invaded a hotel in Ouagadougou, the capital of Burkina Faso, and held the people inside hostage.

This was The Splendid Hotel, one of the biggest hotels in the city, targeted because it was popular with foreigners. The terrorists first attacked a café across the street, then moved into the hotel. Some gathered up the people inside and held them hostage, while others rigged the buildings with bombs to make it as hard as possible for Special Forces to get in.

For the most part, Africans were kept as hostages, but anyone who seemed to be foreign was shot on the spot. A survivor said that the men would walk up and down the hallways, shooting people who seemed to be alive. Another said they seemed to be targeting white people.

It took until the next morning to get the people out. By then, 29 of the hostages were already dead, and of the 126 people they managed to save, half had been seriously injured. 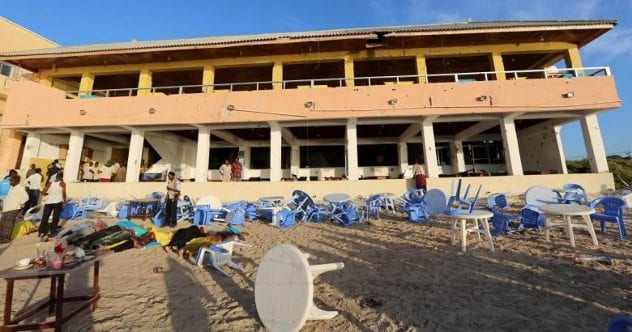 On January 21, 2016, a Somali couple were holding their wedding at Lido Beach. They held the reception at the Beach View Restaurant, expecting that this would be the first day of a long life together. Instead, their lives—along with the lives of 18 other people—were tragically cut short by Islamist Al-Shabaab terrorists.

This was not an isolated incident. Just one week earlier, Al-Shabaab militants had attacked a Kenyan army base set up in Somalia to help fight terrorist cells. In that attack, they killed 143 military personnel by detonating a car bomb inside the camp and launching an all-out assault. 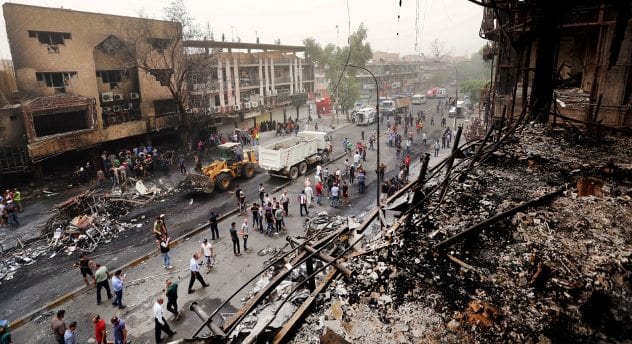 One of the worst terrorist attacks in Iraq happened on July 3, 2016, in a shopping district in Baghdad. At the end of the fast for Ramadan, the people of the city went out to Karrada to shop at the malls, eat, and celebrate, most unaware that ISIS had promised a Ramadan full of bloodshed.

ISIS believed that these people were breaking the fast too early, and this, in their minds, was justification enough to slaughter hundreds of civilians. A terrorist brought a truck loaded with explosives up to the mall and detonated it. The windows were blown out, the walls collapsed, and the mall was reduced to a steel skeleton.

Rescue workers had to dig through the rubble to find bodies and survivors. For many, it was already too late. 292 people died in the attack. This was hardly an isolated incident—on the same day, another bombing claimed five more lives, andqqqq a mere two months before, another massive attack had killed more than a hundred people. 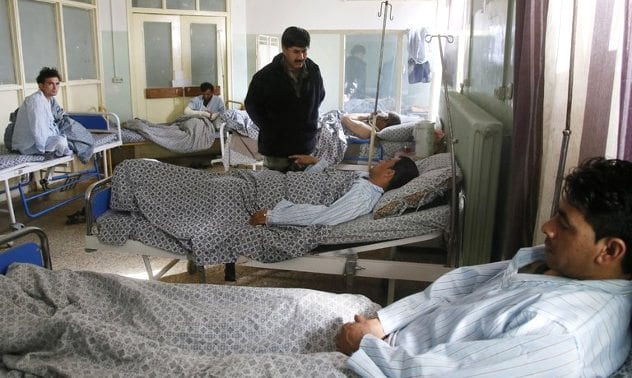 Three terrorists in Afghanistan, on March 8, 2017, managed to sneak AK-47s into a military hospital. They disguised themselves as medics, draped in white doctors coats, and hid their rifles inside to prepare for an attack.

It began with a suicide bomber blowing himself up inside the hospital. The explosion, for the gunmen, was a signal. They pulled the AK-47s out of their coats and opened fire, slaughtering helpless, injured patients who were confined to their beds, and the nurses and doctors treating them.

One survivor, named Zia Zabuli, recounted barricading himself in a room with three other patients. They heard the terrorist outside try to break through the door. Unarmed and helpless, they sat there, silently praying to God not to let the man in. Their barricade held, and the terrorist moved on.

Special forces had to fight for hours to clear out the terrorists. But not before they managed to kill 30 people—wounded soldiers and the people trying to help them. 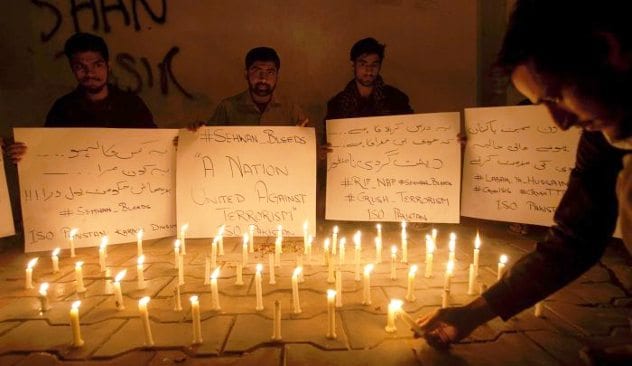 On February 17, 2017, hundreds of Pakistanis visited the shrine of Lal Shahbaz Qalandar, the philosopher-poet, considered a holy man to the Sufi religion. They were celebrating a festival called Urs, held on the anniversary of Qalandar’s death, when the terrorists attacked.

While the people were dancing and celebrating, a terrorist threw a grenade into the crowd. The grenade did not detonate—but the attacker had another bomb in his jacket, loaded with ball bearings to send shrapnel through the crowd. He detonated it in the middle of the throng, killing himself and taking 83 people with him—20 of which were children.

It was just the biggest in a series of attacks across Pakistan that week that claimed at least 99 lives. ISIS took credit for every one of them, boasting on their website about how they arranged the massacres of innocent people.

The next morning, the people of Sehwan reopened the shrine. They picked up the celebration just where it had been stopped, dancing and celebrating in spite of the tragedy. “They have been bombing shrines for long,” one man who came to the celebration told the press. “If they think this blast will create fear among the Sufi people, they are badly mistaken.”