They can be soulful, they can be sad, and they can reach millions of hearts. Great photos say more than a volume of words can. Photos have the ability to record miracles and disasters. Children have often been pictured in both, from joyful moments to tragic ones. They speak directly to the heart without barrier of language or distance. This list looks at some of the most enduring images and how they changed thousands of lives.

10 Vulture Waiting For Girl To Die 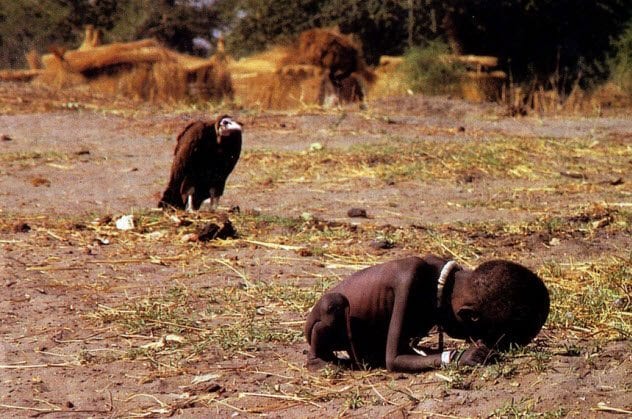 Title: The Vulture and the Little Girl, Ayod, South Sudan, 1993

Pictures can tell the truth with light and timing. In the bright day, the child was too weak to stand. She was only one of many in a South Sudan that was gradually starving to death. A vulture landed nearby to watch and wait for her to die.

With the photographer nearby and the child still crawling, the vulture did not draw nearer. The girl supposedly made it to the feeding center nearby. Yet the picture became a “metaphor of Africa’s despair.”

People knew that the Sudanese were starving. But when this was published in The New York Times in 1993, it opened many eyes. And it made hundreds ask: Why didn’t the photographer help the child?

He chased the vulture away but left her to continue her painful crawl. Not everyone realized that photojournalists were told not to touch famine victims for fear of spreading disease.

There was an outpouring of accusation toward Kevin Carter. Was it a photojournalist’s duty to intervene? A year after taking the picture, Carter took his own life. 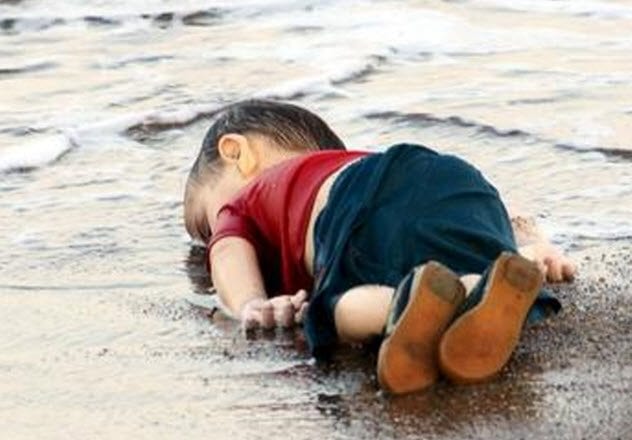 When photographer Nilufer Demir came across the two-year-old Syrian boy washed up on the shore, Alan looked like he was sleeping. Demir took the pictures because that was “the only way to express the scream of his silent body.” Alan was a Syrian refugee of the ongoing civil war that has already killed hundreds of thousands of innocent civilians.

Millions more are refugees, and the story of Alan’s family is a common one. Syrians who escape the fighting have reached refugee camps, only to find them overflowing and hungry. Chances to be transferred to a safer country can be frighteningly slim when the refugees have no connections or good source of income. Alan’s family was denied multiple times.

In a last, desperate act, they paid to be smuggled out on an inflatable raft over open waters. The raft, holding twice its recommended capacity, capsized several minutes in, and bodies began to wash up on the Greek coast.

It’s easier than ever to share a picture with the world. When Alan Kurdi’s picture was released, millions were viewing it within the day. It’s one of the most telling images in an ongoing war that many prefer to ignore. 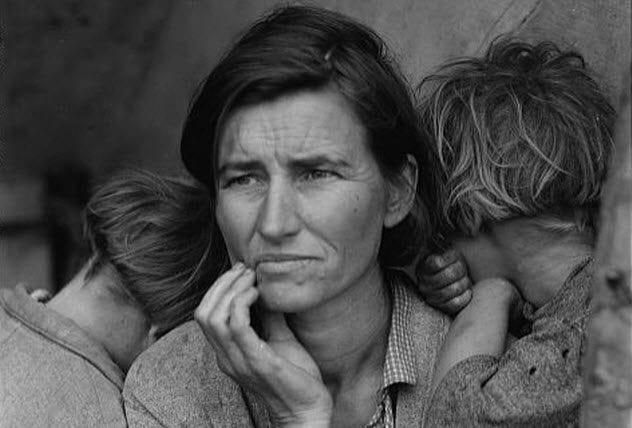 It became the most famous picture of an American era and showed the power of storytelling that an image could have. The Great Depression left many people lost on the roadside, like the woman and her children in the picture.

The picture was almost never taken. But as photographer Dorothea Lange drove past scenes of desperation and hunger, she felt as if she were drawn by a magnet. She turned around and headed back to a pea pickers’ camp. The crops were frozen, leaving thousands with no food and no work.

Lange approached one of the families. There were the parents and seven children. Lange said that 32-year-old Florence Owens Thompson had sold the tires of her car for food. The family also ate birds killed by Frances’s children. Her face, worn with resignation and hunger, looked past the camera. It represented the desperation caused by the Depression.

When the picture Migrant Mother was released, 9,100 kilograms (20,000 lb) of food were sent to the pea pickers’ camp.

7 A Fall From A Building Captured On Camera 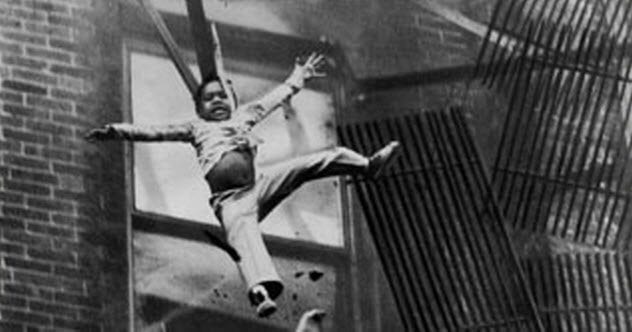 Where should the line be drawn for releasing disturbing images? The photographer thought he was taking pictures of a routine rescue. The godmother and her goddaughter were crowded on the fire escape where a firefighter was moving to help.

In the midst of the rescue, the fire escape collapsed. The photographer continued to take photos, freezing the terrible fall in picture. The victims seemed to be swimming through the air, their expressions clear in that instant.

Photographer Stanley Forman turned away before they hit the ground because he didn’t want to see their deaths. The godmother, Diana Bryant, died when she hit the ground. But miraculously, she cushioned the fall for her two-year-old goddaughter, Tiare, who survives to this day. 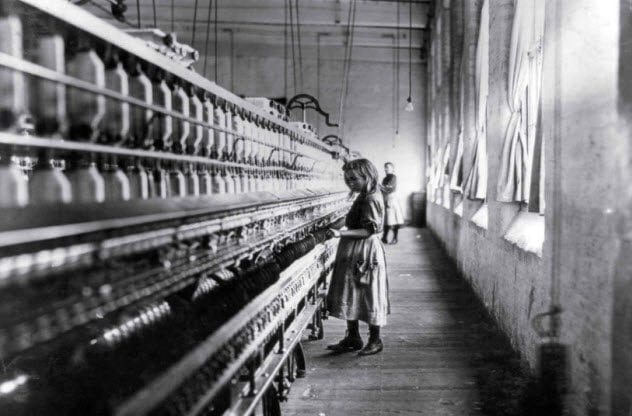 Lewis Hine was a muckraker with a plan. He wanted to expose the nightmarish reality of child labor laws and how much they were abused daily. He went from Massachusetts to North Carolina, taking pictures of children in factories and newsboys on the streets.

To get into factories and onto private property, Hine would claim to be anything from a Bible seller to an insurance agent. He was regularly threatened with violence and even death.

Hine recalled many of the children’s harrowing cases. Children weren’t taught to read and were often punished for failing to meet quotas. Their earnings were appalling, especially for operating such heavy machinery.

The girl in the picture is Sadie Pfeifer. She was manning a massive cotton machine. Some places were too high to operate, and she’d need to climb up the equipment to reach it.

The picture that showed the wispy girl surrounded by crushing, cold machinery was used with Hine’s other work to help expose child labor. That iconic picture and others were the lynchpin in the campaign to spark debates about child labor laws.

5 Iraqi Girl Crying After Her Family Died At A Checkpoint 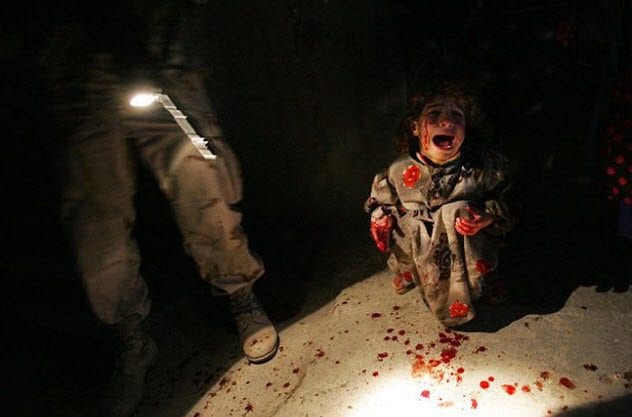 The blood-spattered, five-year-old girl at the Iraqi checkpoint showed a glimpse of a wider story. Samar Hassan’s parents were driving her brother back from the hospital when US soldiers opened fire. The soldiers had feared that the car was full of suicide bombers and gunned them down.

Only afterward did they see that it was a civilian family. These kinds of arbitrary civilian casualties were common during the Iraq War because soldiers were given liberal rights to take any means necessary to protect themselves.

In 2005, photographer Chris Hondros took one of the few images of this nature that reached popular imagination in the West. He delivered the picture despite orders to keep it. The order was due to the tight control over war photography at the time and because photographers found it too dangerous to travel there. Hondros died in the 2011 civil war in Libya.

The child’s face represented the civilian’s pain during the war. It is one of the most important photographs of the Iraq War. It also sowed skepticism in the public when they saw the people they were supposedly trying to help. The photo reached the Pentagon, and policies about checkpoints were changed due to the image. 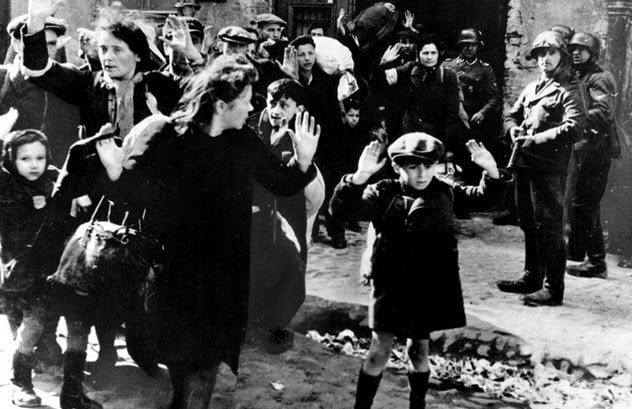 Although there are theories, no name has been confirmed for the Jewish boy whose arms were raised in surrender. He was in a Warsaw ghetto, which was a prison of death and starvation. The prisoners saw little hope or chance of rescue. So on April 19, 1943, they led a sparsely armed rebellion.

The Germans answered with tanks and flamethrowers. After that, the 56,000 survivors faced either summary execution or deportation to concentration camps. The boy, who could not have been older than 10, was led to his awful fate.

The picture was taken by Nazi SS Major General Jurgen Stroop. He was so boastful and proud of clearing out the ghetto that he put many photos into what he named the Stroop Report to document his accomplishments.

It eventually led to his downfall. During the war crime trials, the photos were used as evidence against him. They gave faces to the sufferings the Jews had undergone.

Other photos were presented as evidence, but none had the evidentiary impact of the report. Stroop was hanged outside of Warsaw. The Jewish boy in the photograph now represents the face of the six million Jews who died defenselessly. 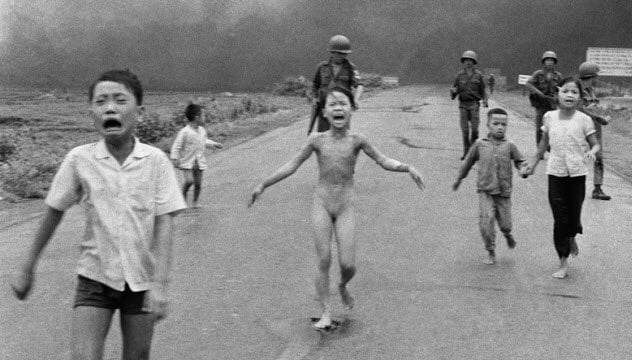 US bombers mistook Vietnamese children for enemy fighters. They rained down napalm on the village, sending the children fleeing for their lives. Friendly fire is common in war, but few pictures up to that point captured it so closely and graphically.

The picture, now called Napalm Girl, showed war as it had rarely been seen. It showed that the Vietnam War was doing more bad than good. Napalm Girl remains among the most influential pictures in war photography.

2 First Picture Of Fetus Within The Womb 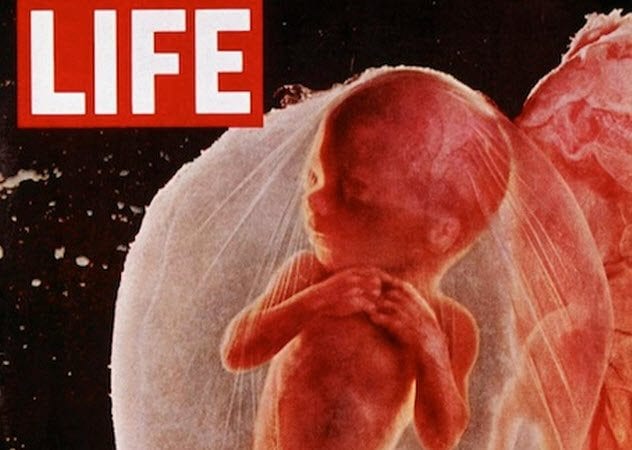 Title: The Drama of Life Before Birth, Stockholm, Sweden, 1965

It was the first time the public could see a developing fetus. Many myths about pregnancy were dispelled. People wondered how the photographer had accomplished this. Eight million copies published by Life magazine sold out in an instant. Then the question rose up: When did a fetus become a real human?

Lennart Nilsson devoted 12 years of his life to documenting the development of the fetus during pregnancy. Taking a picture of a fetus within the womb was thought to be impossible. Despite the skepticism, Nilsson accomplished the impossible.

Not even he could predict that he had created a moment of history. It’s become one of the most iconic images used by antiabortionists over the issue of the right to life vs. the right to choose. Nilsson has never taken an open stand on abortion. He said, “I am grateful if I have contributed to increasing the respect for life.” 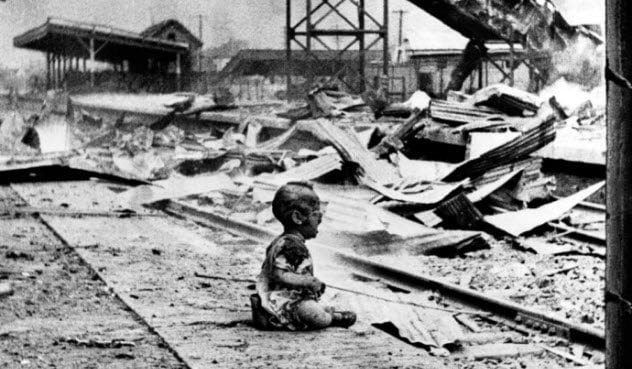 It remains one of the most influential photos of all time. Japan was openly bombing and killing its way across China. But to most Americans, it was a distant conflict and not their problem.

The picture was taken after Japanese bombers attacked Shanghai in the middle of the day on Saturday, August 28, 1937. Bombs were dropped on a railway station where Japanese refugees were crowded.

The picture was taken minutes after the bombs had fallen. Chinese photographer H.S. Wong recalled the horror as the dead and the living crowded the terminal. “My shoes were soaked with blood,” he said.

He saw a baby alone on the railroad tracks with the mother lying dead nearby. He took pictures before going to help the baby, who was soon taken by his father. The pictures released in the Chinese press made their way overseas to the US.

The Bloody Saturday (aka Shanghai Baby) photo caught the sympathy and shock of the public as it was released on every major news venue. Over 130 million people could now put a face to the tragedy.

The Shanghai baby shocked the country, and condemnation of the war crashed down on Japan. It showed the devastation, death, and sorrow the war was bringing. It was one of the landmarks leading toward America’s entry into the war.

Kellie McIntyre is a freelance writer working over social media and websites. An author of lists and articles, she has her niche in history, science, and pop culture. She’s found a slight niche in writing reviews for books and movies.