A picture is worth a thousand words—or the life of its photographer. Obviously, photographers will often go to extremes to get the perfect shot. For some, these pictures can make their careers, but there may be a high price. Possibly too high.

War and wildlife photographers are usually at the most risk because they can be in active danger zones. While many have died under these circumstances, some have survived to tell their stories.

10 Atif Saeed Was Almost Killed By An Angry Lion 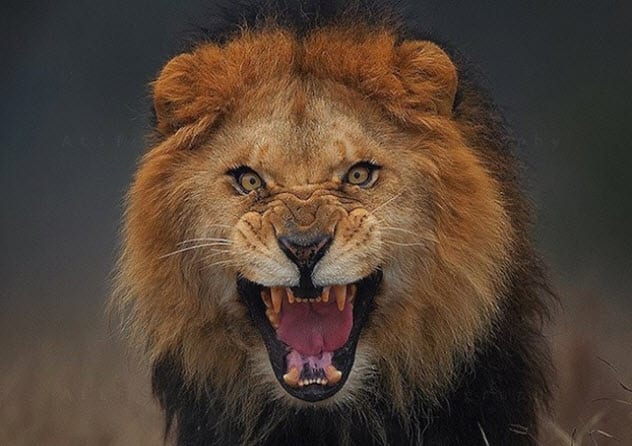 Wildlife photographer Atif Saeed was almost killed when the lion he was snapping charged at him. The incident took place at a wildlife park in Lahore, Pakistan. Saeed was driving around the park when he found the lion. He drove toward it, alighted from his vehicle, and started taking pictures. He was about 3 meters (10 ft) away at the time. The lion did not appreciate his presence and charged.

Saeed took the chilling picture just before jumping into his Jeep. He only escaped because he left the door of his vehicle open, probably because he expected the lion to charge. Saeed later said that he found the incident hilarious, especially after he made his getaway. But he vowed never to put himself in such a situation again because it was too dangerous.[1] 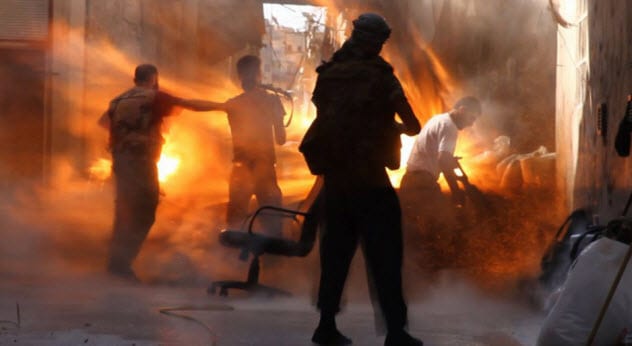 In 2012, Tracey Shelton was covering the Syrian Civil War when she was almost killed by a shell fired by a Syrian Arab Army (SAA) tank. The SAA is the official army of the Syrian government. Their primary opponent is the Free Syrian Army (FSA), a group of rebel factions that want Bashar al-Assad to step down as president of Syria.

The rebels involved here were from the Noor Den al-Zenke battalion. Shelton was with them before the tank arrived and had been taking their photographs as they cleaned their position. The pictures showed them joking and laughing.

The rebels soon received information that there was an SAA tank in their area. They rushed to their weapons and tried engaging the tank when the combat vehicle fired. Shelton took the photograph the moment the shell hit the rebels. The picture shows three rebels in front with a fourth behind them. Shelton was behind the fourth rebel.

The rebels could not take cover before the shell exploded. All three in front were killed. The rebel behind them survived with injuries. Shelton was unhurt, though she was covered in dust and smoke. The bodies of the three dead rebels were recovered and taken away while new fighters were drafted to replace them.[2] 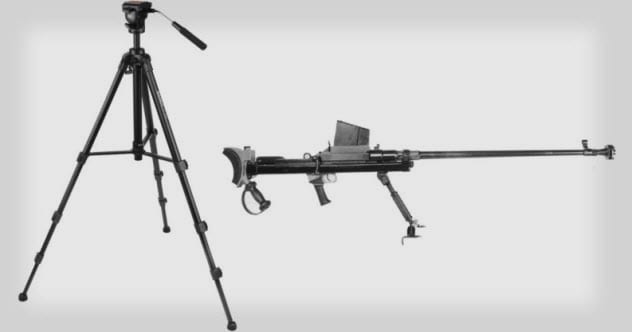 On the night of September 4, 2017, photojournalist Andy Grimm rode to a traffic stop in Ohio where he hoped to take some photographs. He had just brought out his tripod when he was shot by Clark County Deputy Jake Shaw, who had mistaken the tripod for an assault rifle.

Shaw shot at Grimm twice. The first bullet hit Grimm in the chest, and the other barely missed his shoulder. Luckily, he was not killed. He would later sue Shaw and the sheriff’s department for excessive force and violation of his human rights. Grimm said that Shaw never approached him or ordered him to drop the supposed rifle before shooting.[3]

However, Grimm added that he understood the shooting was a mistake and said that he did not want Shaw to be fired. Grimm had been driving to get pictures of a lightning storm when he decided to take photos of the traffic stop. A grand jury determined that Shaw would not be charged for the shooting. 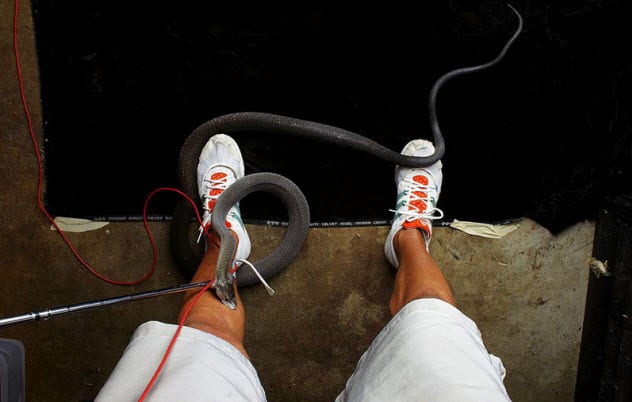 The black mamba is one of the world’s most deadly venomous snakes. A bite will kill a human in a few hours. Not many people have lived after a bite from this type of snake. Photographer Mark Laita became one of those few when he survived a bite in 2012. Interestingly, Laita took a picture of the snake the moment it bit him.

At the time, Laita was working on a book about snakes. He had traveled to Central America where he took pictures of some snakes held by a collector. The collector had removed the venom glands of most of the snakes but not the mamba.

The mamba continued moving closer to Laita during the photo shoot. Then it attacked when the collector hit Laita’s camera cable while trying to capture the snake.

The mamba got scared and lunged at Laita, biting him in the leg. Laita survived the bite without treatment even though he bled profusely. Laita suspected that the snake did not release any venom during the bite. If it did, the heavy bleeding that followed probably expelled it. Laita only realized that he had taken a picture of the bite as he went through his photos that night.[4]

On August 20, 2018, photojournalist James Akena was attacked by Ugandan soldiers as he took pictures during an anti-government protest. A chilling video shot by another person shows one soldier approach Akena and start whipping him with a cane. The soldier is joined by two others, one of whom also has a cane.

As the three men beat Akena, the soldier without a cane spots the person shooting the video. He barely pulls away from Akena and his colleagues when he aims his rifle at the individual making the video and fires a shot. The video stops at this point, although it does not seem like the person was killed. Akena was taken away after the assault.

Later, the Ugandan army stated that the soldiers involved would be disciplined. However, this was probably a save-face gesture as they were only responding because the video went viral. Human Rights Watch observed that Ugandan police and military officers had often beaten journalists who took photographs during anti-government protests and those officers had faced no consequences.[5] 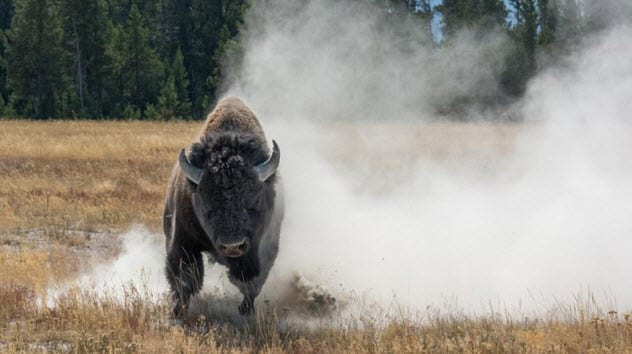 Willis Chung was another wildlife photographer who found himself at the mercy of a charging animal. This time, it was a one-ton bison. Chung was taking photographs at Yellowstone National Park when the animal suddenly ran toward him.

Chung continued taking pictures while the bison charged. At a certain point, the animal was getting too close. So the photographer finally fled and left his tripod-mounted camera behind.

The bison walked around the camera, looking at it curiously. The animal even walked up to the camera from behind and seemed to be looking at the LCD screen as if trying to take a photograph. Meanwhile, Chung took more pictures of the bison with another camera.[6] 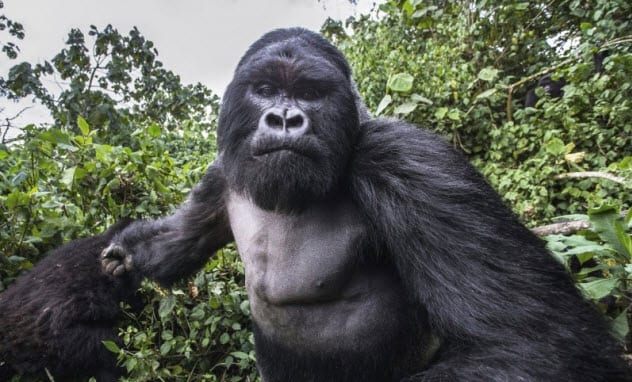 Photographer Christophe Courteau was almost punched by a gorilla that he was photographing at Volcanoes National Park in Rwanda. He and some other photographers were taking pictures of the gorilla troop when the leader, a 250-kilogram (550 lb) beast called Akarevuro, charged at Courteau without warning.

He continued taking pictures as Akarevuro came closer, even up to the moment that the gorilla stopped right in front of him. The photograph shows Akarevuro with his fist clenched as if he was going to punch Courteau. Akarevuro pushed Courteau aside and went after another male gorilla that was behind the photographers. That animal had been following Akarevuro’s troop, probably to get one of the females.[7]

Courteau was not seriously injured and only ended up with a small scar on his head. However, he felt like he had been hit by a train. A similar incident happened in the Republic of Congo when an aggressive male charged at photographer Will Burrard-Lucas.

The troop was not used to having humans around and was hostile toward the photographers following them. The dominant male in the group was exceedingly aggressive and kept charging. However, he never completed the charges and often turned back when he got close to the photographers, who continued taking pictures. 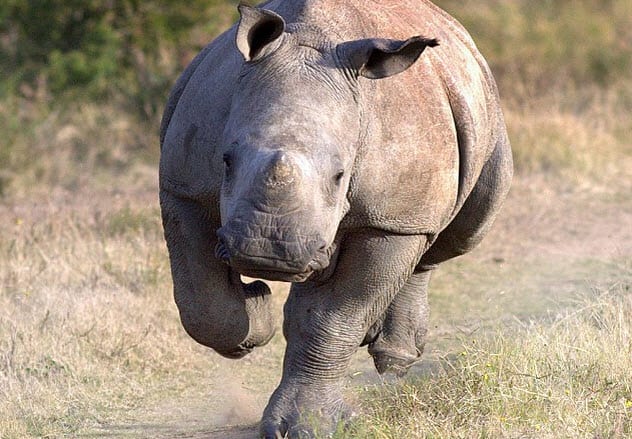 Jonathan Pledger was taking pictures of wildlife at Kruger National Park in South Africa when a white rhinoceros charged at him. Unlike other people on this list, Pledger did not know that a wild animal was around. He only realized that he was in danger when he heard the rustling of nearby bushes. A rhino jumped out of a bush and headed straight toward the photographer.

Pledger did not run. Instead, he continued taking pictures as the rhino came closer. The animal either chickened out or just changed its mind as it neared Pledger. The rhino turned left and ran back into the bushes. Pledger later said that he was afraid when the rhino charged.[8] 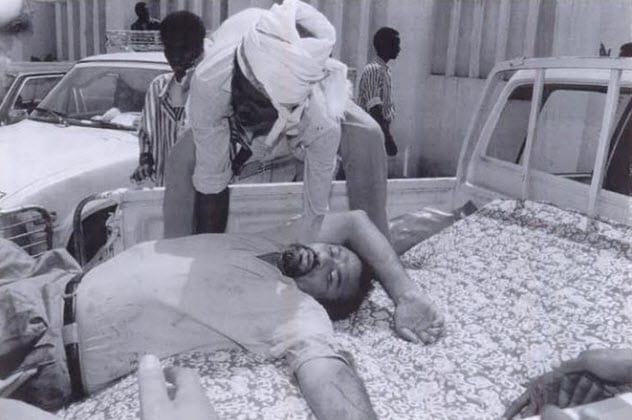 Mohammed Shaffi was not a photographer but a cameraman when he was almost killed by a mob during the Somali Civil War. However, a soundman and three photographers who were with Shaffi were killed.

One morning in July 1993, US Army gunships attacked the command center of Somali warlord Mohammed Farah Aidid. Fifteen minutes after the attack, vehicles from Aidid’s militia arrived at the hotel where Shaffi and his companions were staying and offered to take them to the command center to take pictures and shoot videos. Such was routine during the war.

The journalists were taking pictures and shooting videos when the irate mob that had gathered at the scene suddenly attacked them. The journalists fled in different directions, and the mob went after them. Shaffi was beaten and pelted with stones as he ran. Someone even shot him in the arm at close range.[9]

Shaffi escaped when he jumped into a vehicle filled with some Somali men. He thought they were returning him to his hotel until they drove past his hotel and continued toward a market. The men finally released Shaffi when they realized he was a Kenyan Muslim. They initially thought he was a Pakistani Christian. 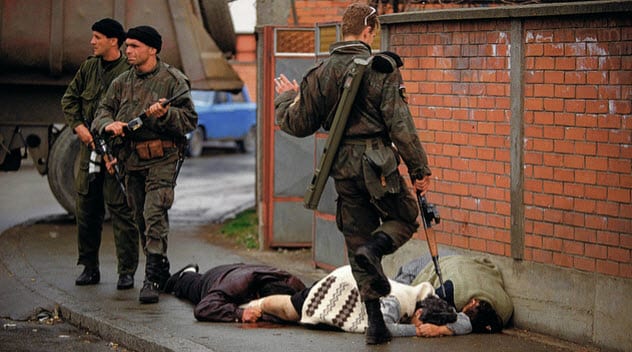 Photographer Ron Haviv almost lost his life for taking pictures that implicated fighters in the Serbian Tigers unit of war crimes during the 1992 Bosnian War. The most iconic was the picture of a fighter kicking the body of a woman whom his colleagues had just killed.

Haviv was with the paramilitary members at the time of the killings. He watched the fighters drag a man out of his house before shooting him on the street. They later shot his wife and her sister. Haviv secretly took photographs of the shootings, although the Serbian paramilitary members were not captured in the frames.

One Serbian fighter soon walked up to the dead family and kicked their bodies. Haviv took this picture, too. However, the fighters heard his camera click and looked at him. Their commander, Zeljko Raznjatovic (aka Arkan), later collected the film from Haviv and promised to return the processed photographs.[10]

Arkan did not realize that Haviv had swapped the roll of film and hidden the one containing evidence of the war crimes. Later, Haviv published the pictures. This angered Arkan, who vowed to kill Haviv. Some of his fighters would later arrest other photographers after mistaking them for Haviv.

Read more about poignant photos that will break your heart on Top 10 Famous Pictures Of Children That Will Break Your Heart and 10 Poignant Photographs From Humanity’s Lowest Moments.