The Nazis seriously wanted to showcase the superiority of Germany and the Aryan race. And what better way to do that if not with architecture. The architectural style of the Nazis imitated that of ancient Rome, which Hitler hoped to surpass in development. His aim was to totally modify Berlin’s landscape and rename it Germania, which would be the capital of a Germany-dominated Europe.

This dream, coupled with World War II, led to the construction of some really impressive buildings. The Allies destroyed several of these buildings during and after the war, but some survived and are still around today. They have been repurposed and are now used for the good of man. 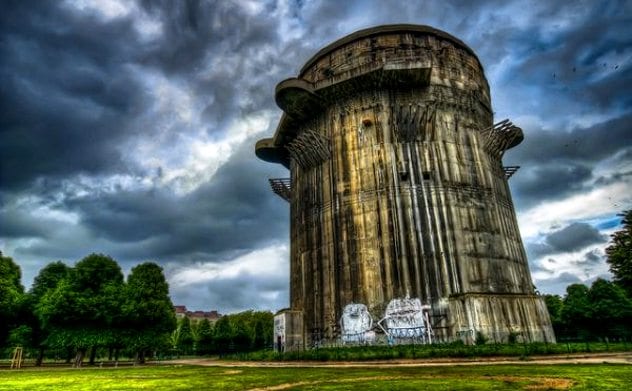 Flak towers were huge, castle-like forts, built to deter Allied aerial attacks on Berlin and Hamburg in Germany and Vienna in Austria. Eight towers were built in total, each with reinforced concrete walls of between eight and fourteen inches (20-35 cm) thick. The walls were impenetrable to Allied bombs—even when they suffered direct hits—and none were destroyed all through the war.

Each flak tower consisted of two towers: a G combat tower with eight 128 mm anti-aircraft guns and thirty-two 20 mm guns, and an L command tower with a radar and forty 20 mm guns. The combat tower could engage ground targets eight and a half miles away or aerial targets fifty thousand feet in the air with its 128mm guns, which had an impressive firepower of 8,000 rounds a minute.

Flak towers doubled as bomb shelters with room for ten thousand people, although over thirty thousand people crammed themselves in the towers when the Soviet military invaded Berlin. The forts withstood Soviet ground assaults, forcing the Soviets to bypass them and later negotiate for their surrender.

Four of the eight forts were demolished after the war. The demolition proved difficult, and one took five months of planning and three demolition attempts before it finally fell. 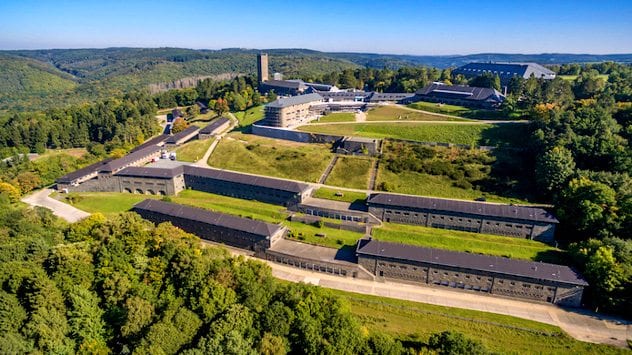 The Vogelsang National Socialist Castle in Eifel, Germany, was built between 1934 and 1936. It was used as a school for indoctrinating young Germans with Nazi ideology but ceased operation after World War II broke out in 1939. It was converted to a military barracks during the war and a training site for the Belgian army after that. It has been returned to the German government, which wants to convert it to a museum.

Unlike many other Nazi buildings, the Vogelsang Castle still contains Nazi symbols including a swastika that is etched into the ground and covered with a mat. Several other Nazi symbols on the walls were covered over with plaster. German Jews want the castle pulled down, while other Germans, who do not share their views, want it turned into an old people’s home, a hotel, or a park. 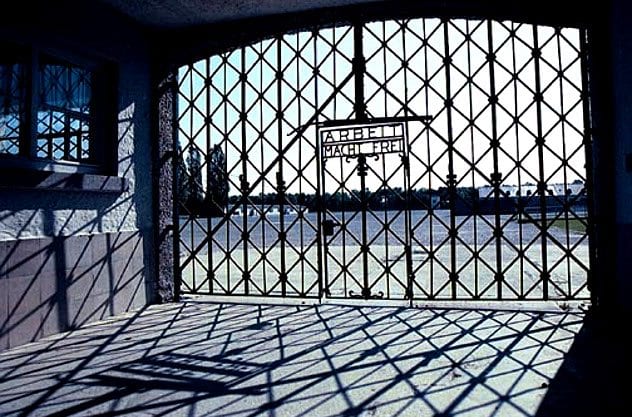 The Dachau Concentration Camp in Dachau, Germany, was the first of the infamous Nazi concentration camps. It was originally built to hold political prisoners but soon housed Jews, Jehovah Witnesses, Roma Gypsies, homosexuals, and criminals, who were used for medical experiments and forced labor. Like other Nazi concentration camps, the gates to Dachau bear the words Arbeit Macht Frei—work sets you free.

The camp also had its own gas chambers, which were probably never used. Instead, prisoners were sorted at the camp and those sentenced to death were transported to other concentration camps where they were killed.

Today, the Dachau concentration camp is a memorial site and museum visited by over eight hundred thousand people each year. At the entrance of its crematoria is a small Russian Orthodox chapel, built on soil imported from Russia. The chapel is too small to accommodate visitors; however, it is used for private prayers and religious services. 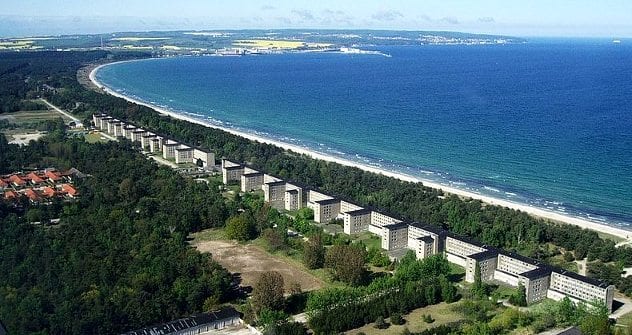 The Prora holiday resort on Rugen Island, Germany, was built as part of the Nazi party “Strength Through Joy” program that was intended to allow the working class to enjoy the luxuries of the middle class. Besides its role as a holiday destination, it was also supposed to function as an indoctrination camp, where visitors were educated on Nazi ideology.

The dormitory-like resort had eight lookalike buildings, complete with cinemas, large theaters, and ten thousand rooms overlooking the ocean. A swimming pool and festival hall were also proposed but were postponed due to the outbreak of World War II.

During the war, Prora housed new conscripts, laborers, refugees, and prisoners and after the war, it housed the Soviet and East German militaries.

One of the resort’s eight buildings was destroyed by the Soviets after the war. Another was converted into a hostel, two are privately owned, and the last four are being converted into luxury apartments. Renovation is still ongoing and is expected to be completed by 2022. 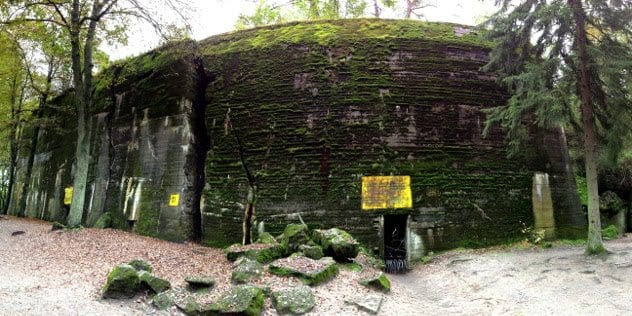 The Wolfschanze (Wolf’s Lair or Wolf’s Fort), in Ketrzyn, Poland, was Adolf Hitler’s command center for most of World War II. It is the site where Hitler survived an assassination attempt by Nazi officer, Count Claus von Stauffenberg, who tried to kill him with a bomb hidden in a suitcase. Hitler only survived because the meeting was held in a building and not a bunker, and the briefcase was shifted away from him moments before it detonated.

The location of the “lair” was carefully chosen. It was hidden by thick forests and built close to a lake that prevented a ground assault from its eastern flank. It had over eighty buildings and bunkers manned by over two thousand workers and soldiers. It was also surrounded by over 50,000 landmines to stop a ground assault.

The Nazis abandoned and attempted to destroy the base as the Soviet Army advanced in November 1944. However, the task proved difficult for them, and they only managed to partially destroy it.

The buildings in the Wolf’s Lair remain unused, and it is currently a tourist attraction. However, the former Waffen SS garage has been converted into a hotel and restaurant. The Lair is maintained by the Poland Forestry Service, which hopes to lease it to anyone who can afford the £90,000 ($111,000) rent. 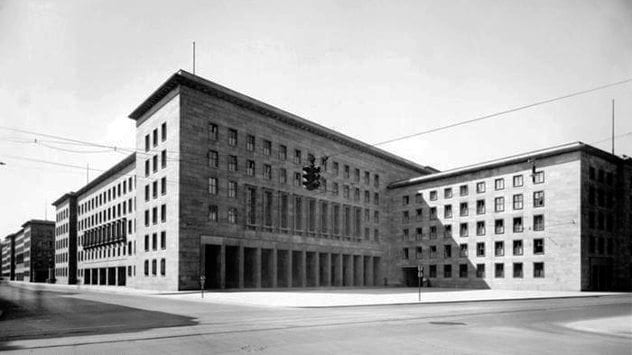 With 2,800 rooms and seven kilometers of corridors, the Reich Air Ministry—the headquarters of the Nazi Air Force, the Luftwaffe—was the largest office complex in Europe at the time of its completion in 1936. Surprisingly for a building of its importance, it survived the war unscathed and was retained for military use by the Soviet Union.

The building housed the Treuhand committee that was tasked with privatizing the assets of the former East Germany when the Cold War ended in 1991. The committee proved unpopular with Germans and its first chairman, Detlev Rohwedder, was assassinated the same year. This is why the building was renamed the ”Detlev Rohwedder Haus.”

The building is still used as a backdrop in Nazi-era movies, and although not open to the public, is open for a free tour every August. It currently houses the German Ministry of Finance. 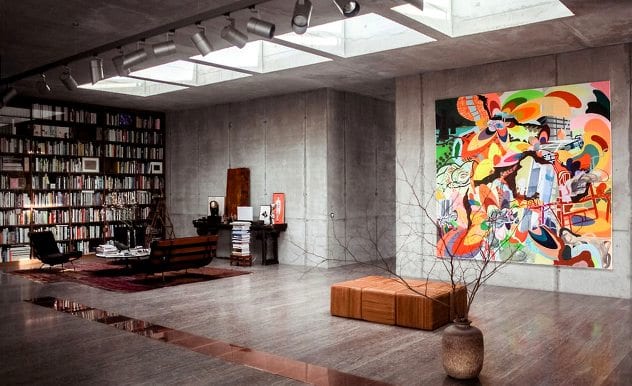 In 1942, the Nazis built the 120-room banana bunker as an air-raid shelter. The Soviets took over it in 1945 and converted it into a prisoner of war camp. Later on, East German authorities converted it into a warehouse to store fruits imported from Cuba. This is why it is called the Banana Bunker.

After the reunification of Berlin, the building was converted into a performance hall and later, a nightclub dubbed the “hardest club in the world” due to its wild sex parties. Authorities later shut the club down, and the bunker remained unused until a couple purchased it to display their art collection in 2003. 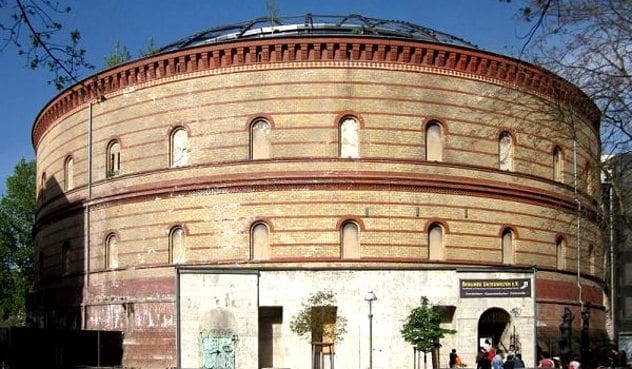 The Fichtebunker in Kreuzberg, Berlin, was built between 1883 and 1884 to store gas for the city’s street lamps. It fell into disuse at the turn of the century when the city switched to electricity, and it remained unused until 1940 when the Nazis converted it into a bomb shelter designed to hold 6,000 people.

The building was heavily renovated for its new role. Its outside walls were reinforced to 1.8 meters (six feet) thick, and the ceiling was reinforced until it was three meters (ten feet) thick. It was also segmented into six floors, each with 120 rooms.

The building exceeded its 6,000 capacity towards the end of the war when over 30,000 people sought refuge in it to escape Allied bombings. This number included the local police station, which moved in with its prisoners, who were kept in specially built cells.

The bunker was repurposed as a refuge after the war. Later on, it served as a homeless shelter and a food depot. The food stored there were the so-called “Senate reserves” Berliners could rely on in case the Soviet Union launched a land blockade into Berlin.

It fell into disuse at the end of the Cold War and remained abandoned until a private firm purchased it in 2006. The firm converted its rooms into luxury apartments, complete with a rooftop garden. It is now known as the Circlehouse. 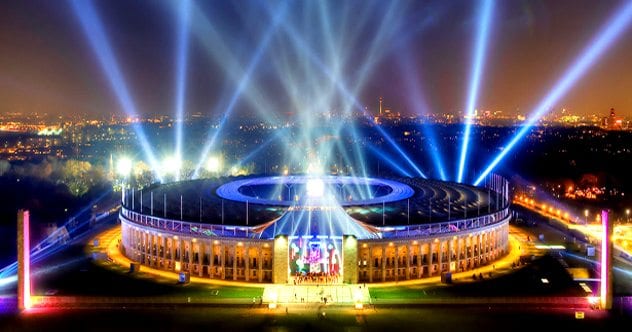 Adolf Hitler ordered the construction of the Reichssportfeld sports complex for the 1936 Berlin Olympic games. At the same time, he wanted to use the event and stadium to showcase the superiority of Germany and the Aryan race.

The Nazi radio network was housed in a bunker underneath the stadium during World War II, and, after the war, the stadium became the headquarters of the British military. Its name was also changed to Olympiastadion to remove all its links to the Nazis.

The Olympiastadion maintained its sports and cultural role after the British abandoned it, and it even held three matches during the 1974 FIFA World Cup, hosted by West Germany. In 2006, the final of the FIFA World Cup, hosted by a unified Germany, was fought out in the stadium. It remains a sports complex today, and it is the home base of the Hertha Berlin football team. 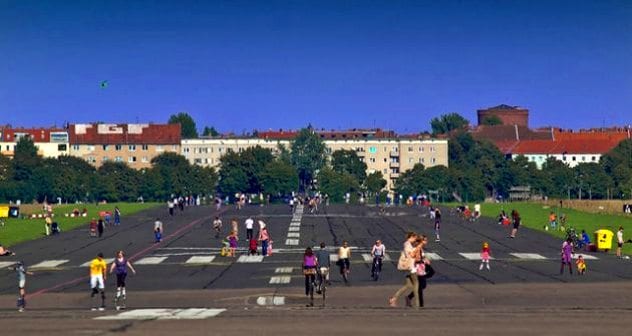 Templehof airport was Europe’s busiest airport in the 1930s. The Nazis shut it down when they came into power and replaced it with a prototype concentration camp, which they also shut down and tried replacing with another airport they never completed.

The US took over the airport after World War II and used it to airlift supplies into West Berlin in 1948-1949. The US also leased out parts of the airport in 1951. Today, several government and private institutions, including the German police, a kindergarten, and a dancing school, call it home.

Tempelhof ceased handling commercial flights in October 2008 when work began on a more modern airport for Berlin. However, the control tower remains under the control of the German Army, who uses it to monitor air traffic around Berlin.

Today, Templehof’s airfield has been converted into a public park, while its buildings were converted into a refuge for Syrian and Iraqi refugees. In 2015, Berlin was preparing to take in 40,000 refugees, to be housed at the airport and several disused barracks.