The rise of social media will allow an uninterrupted stream of information from each person affected by the eclipse. There will be countless photos, videos, and new scientific discoveries.

However, for the majority of human history, this has not been the case. The knowledge that a solar eclipse is caused by the Moon passing between the Earth and the Sun would likely have never crossed the minds of many of our ancestors. To explain the sudden darkness of the Sun, these ancient civilizations crafted a variety of legends and stories. 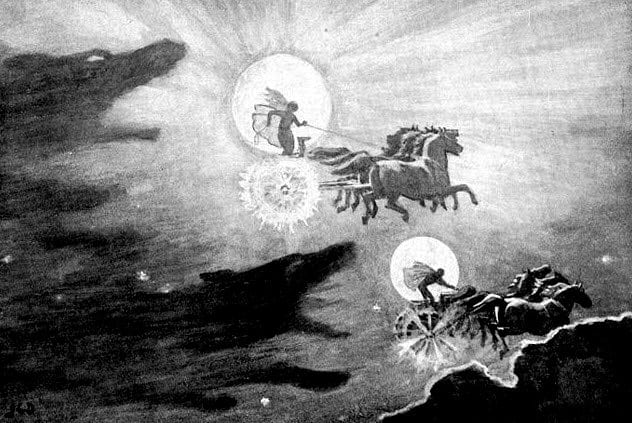 The Norse believed that the Sun and Moon were personified by the siblings Sol and Mani. The sister and brother rode across the sky in chariots and decided upon the length of a day and the seasons of the year. They were the animating forces of the Sun and Moon and were integral to the natural order of the world.

As the two fly across the sky, they are chased by the wolves Skoll and Hati. These wolves are said to constantly pursue both the Sun and the Moon and will eventually catch them. Norse legend states that when the wolves devour both the Sun and Moon, the sky will grow dark and Ragnarok, the Norse apocalypse, will begin. 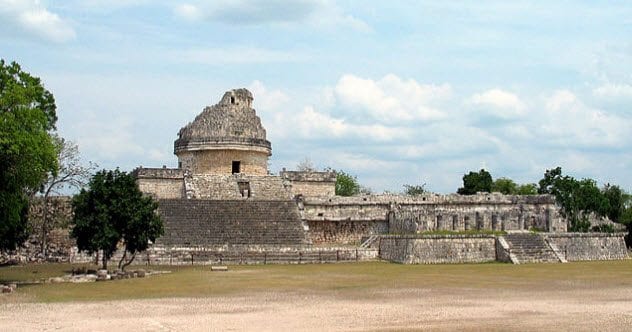 The ancient Maya were heavily involved with astronomy and astrology. They placed heavy importance on the movement of the heavens in their daily lives and in the actions of their entire culture.

To them, the movement of heavenly bodies was a way for the gods to communicate and a solar eclipse would be a largely distressing event. They would call a solar eclipse chi’ ibal kin (“to eat the Sun”).

Perhaps their most impressive feat is predicting the 1991 total solar eclipse on July 11. The Maya were amazingly skilled at observing how small patterns would eventually give way to larger ones. 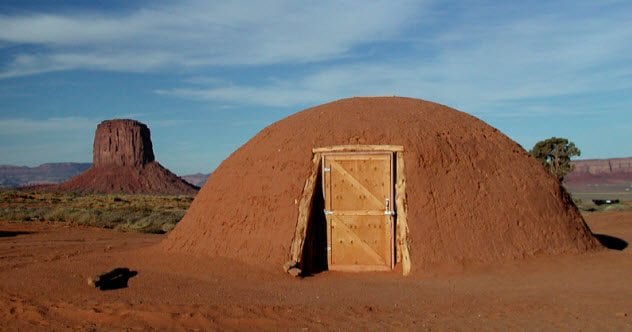 To the Navajo, a solar eclipse is a period of time when the Sun is weakened. During this time, all people must be respectful. There is a strong belief that every man, woman, and child must show respect for the heavens by waiting inside until the eclipse passes. They do not eat, drink, or look at the sky.

According to many modern Navajo, a solar eclipse will surely bring calamity. The ancient Navajo would stop all activity during an eclipse. They would even go so far as to stop ceremonies in progress to avoid any evil that might be brought upon them by the darkened Sun.

Many modern-day Navajo still observe the traditions of their ancestors and refuse to participate in any solar eclipse activities. While many of us will undoubtedly be excited about a large solar eclipse, there will be many traditional Navajo who will simply stay indoors. 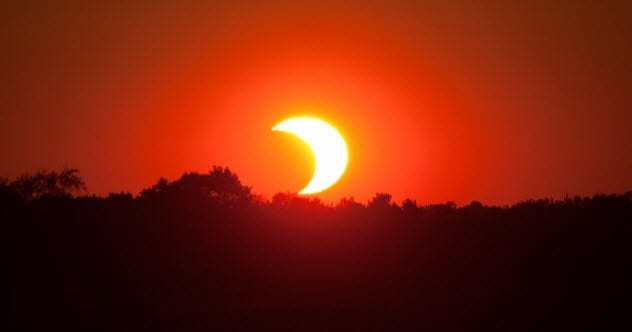 In Korean mythology, there is a story of a king in a dark country far beyond our world. The king of this dark country wishes to find a way to provide light and warmth to his land, so he orders the most ferocious heavenly dog in his country to steal the Sun and Moon of Earth.

Setting out to steal the Sun, this dog, a Bulgae, bites it, only to find that the Sun is far too hot to take with him. He tries to steal the Moon and finds it too cold.

The story states that he returns empty-handed. The king is said to order the dog to steal either the Sun or Moon at any opportunity. Each time the dog attempts this, an eclipse occurs for those of us on Earth. 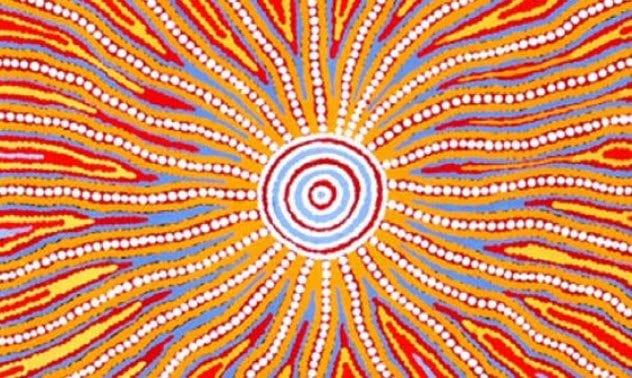 The Aborigines of Australia believed that the Sun was a woman from a camp far to the east who would light a torch and travel across the sky. In the early morning, she would decorate herself with red ocher, spilling some into the clouds to give them their colored tint during sunrise.

As she makes her way to the west, she will once again decorate herself, spilling the ocher to color the sunset before preparing to return to her camp for the next day. She is said to travel back to her camp using an underground passage and to warm the Earth from below, causing plants to grow.

In contrast, the Moon is seen as a male and is linked with fertility. A solar eclipse is described as the Moon uniting with the Sun in an embrace. 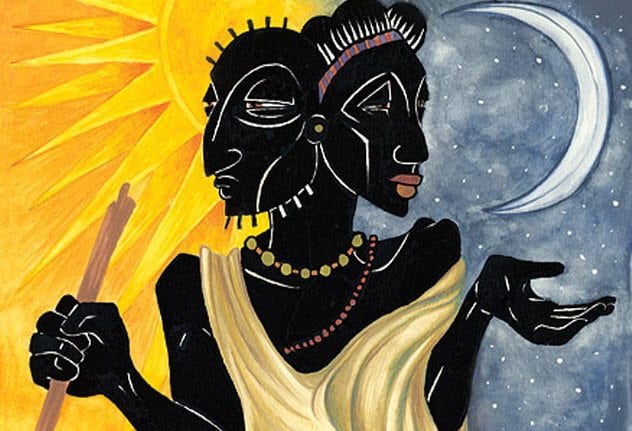 In the West African nations of Benin and Togo, a people called the Fon tell a story of the eclipse that is far more peaceful than many other cultures. They believe that the Sun (“Lisa”) and the Moon (“Mawu”) cause eclipses when they take time out of their busy schedules to visit one another.

Initially, the people were scared of the darkened Sun and thought it to be an ill omen. However, Mawu told them that it was simply Lisa giving him a hug. Afterward, the people were given many gifts and have since viewed a solar eclipse as a wonderful time of coming together. 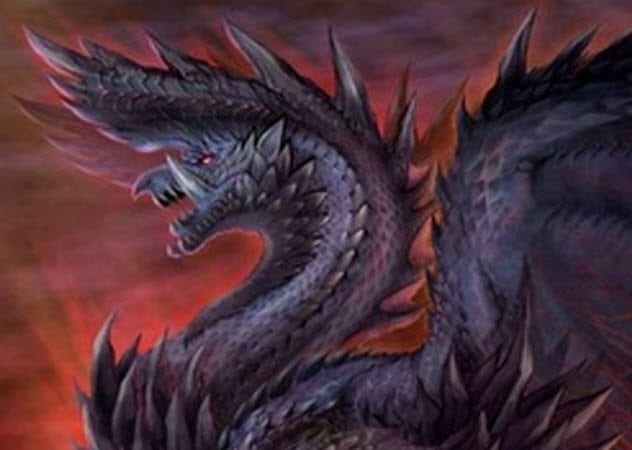 In Mongolian legend, there exists a monster named Arakho who has a terrible hunger for hair. Legend states that humans were once covered in hair, but Arakho devoured most of it, leaving humans to look much like we do today.

The gods saw this as their power waning and ordered the Sun and Moon to make them an immortality potion. However, Arakho heard of the potion and stole it. Before he could drink most of it, his head was cut from his body. Despite this obvious setback, he had consumed enough water to keep his head alive.

In anger, he now hunts the Sun and Moon and devours them. But because he has no body, they simply fall out of his neck. Whenever a solar eclipse happens, Arakho has managed to hunt down the Sun. 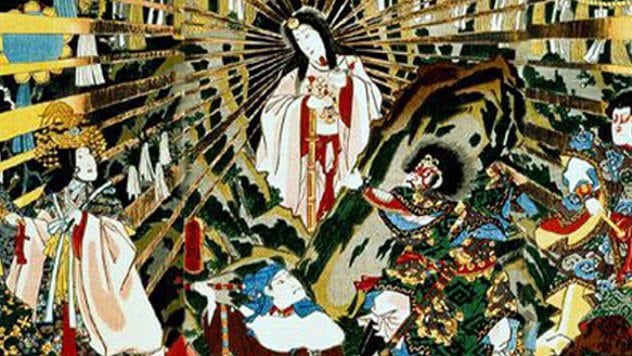 Japanese history has many recorded instances of solar eclipses. For centuries in Japan, the occurrence of an eclipse would result in the closing of offices across the nation on the day of the eclipse. A number of total or very large eclipses were recorded prior to AD 1600. However, many accounts of the events are scattered.

The first legends describing a solar eclipse relate to early Shinto practices. One story is told of a quarrel between Susanoo, the god of the sea, and Amaterasu, the goddess of the Sun.

Susanoo committed a series of offenses toward his sister before he went to his dominion over the sea. Amaterasu did not take kindly to her brother’s actions and hid herself away from the other gods.

With Amaterasu gone, the Sun disappeared from the sky. To bring light back to the world, the other gods decided to lure her out of the cave where she was hiding. The other deities created a parade of riotous entertainment and celebration.

Curious about the sounds outside, Amaterasu decided to take a look. As she exited the cave, she was seized and light returned to the world. According to Shinto belief, a solar eclipse is merely Amaterasu hiding herself away again. 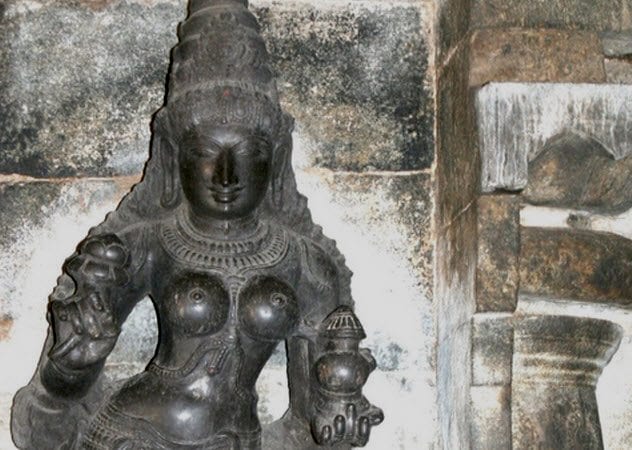 The Hindu legend of the solar eclipse is similar to the Mongolian legend. Both involve the consumption of the Sun by a headless oppressor punished by benevolent forces.

In the Hindu myth, there was a scramble between the Devatas and Asuras to receive amrit (“immortality”) from a pot. Vishnu disguised himself as a beautiful dancer and offered to help distribute the amrit among the two groups. He had both groups sit in opposite rows as he began to distribute the amrit.

However, he never intended to give any to the Asuras and began to give amrit only to the Devatas. One Asura realized what was happening, so he quickly moved into the other group to receive immortality.

As Vishnu made his way toward the Asura and he began to drink, the Sun and the Moon realized that he did not belong in their group. Vishnu quickly undisguised and cleaved the Asura’s head from his body. However, the Asura had consumed the amrit and did not die.

His head became Rahu, and his torso became Ketu. For Rahu to achieve his revenge on the Sun and Moon for revealing his presence, he chased after them and consumed them. Since Rahu was merely a head, he could not eat either the Sun or the Moon and they fell out of his neck.

Each time there is a solar eclipse, it is merely Rahu attempting to take his revenge again. 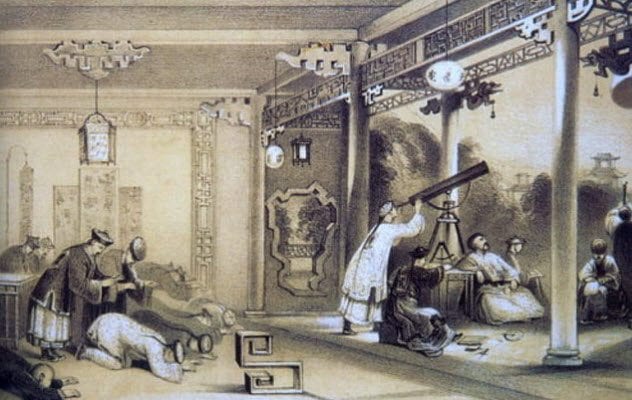 The ancient Chinese were among the first civilizations to create observatories. According to their beliefs, the emperor was linked with the Sun and any change in the Sun could mean an ill omen for the emperor.

Among the first recorded acts regarding a solar eclipse is the alleged beheading of two astronomers who did not predict an eclipse. The emperor would do all that was in his power to appease the powers that be and allow the Sun to return. Early in Chinese history, oracle bones were used to record eclipses. However, they were often cryptic and had no true dates.

Originally, the ancient Chinese held the belief that the Sun was being devoured by a dragon. Prior to the construction of observatories, the main belief was that a legendary celestial dragon was preparing to eat the Sun and plunge the world into darkness.

It was tradition to bang on pots and pans and create large amounts of noise to drive the dragon away. The Chinese eventually moved away from their mythological explanations as they developed more advanced astronomy and kept better paper records.

Despite the advances, there were still some who believed in the old legend. This included the men on a 19th-century naval vessel who fired off their cannons to scare away the dragon eating the Moon.