Whatever the reason may be, these buildings have histories and are a constant reminder of what they once were to those who see them in their abandoned state. This list showcases 10 prominent skyscrapers that are now empty. 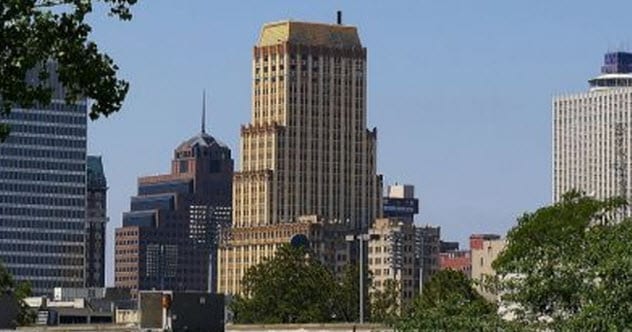 The Sterick Building was completed in 1930. At that time, it was the tallest building in the Southern United States. It remained the tallest building in Tennessee until 1957 and was known as the “Queen of Memphis.” Primarily used as an office building, it included many amenities that made it a popular site, including a barber shop, a pharmacy, a beauty parlor, stockbrokers’ offices, and its own bank.

The building started to decline in the 1960s.[1] Attempts were made to improve the building, such as a new paint job that replaced the white exterior with the yellow-and-tan coat that it still bears today.

The building was added to the National Register of Historic Places in 1978. But by the 1980s, it was vacant and still sits empty today. Although there has been a lot of interest in restoring the building, environmental and legal issues have made it difficult to execute any plans to remodel it. 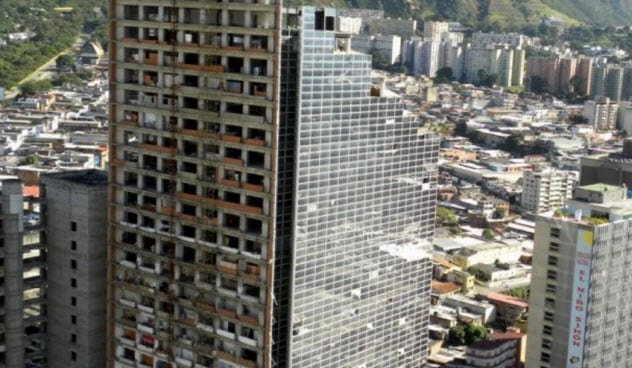 In 1990, construction of a new financial center began in Caracas. It was going to be called Centro Financiero Confinanzas, spearheaded by investor David Brillembourg. It was given the nickname “Tower of David.”

Unfortunately, Brillembourg died in 1993. By 1994, a banking crisis had hit and the Venezuelan government took control of the project. Construction has since been at a halt.

The building lacks essential features for it to be habitable, such as running water, electricity, and even windows or walls in some places. However, when Venezuela experienced a massive housing shortage in 2007, thousands of squatters moved into the 45-story building.

In 2014, the government ran an operation to clear the building and move its inhabitants.[2] Despite that action, the building is still unused and will likely remain so for the foreseeable future. 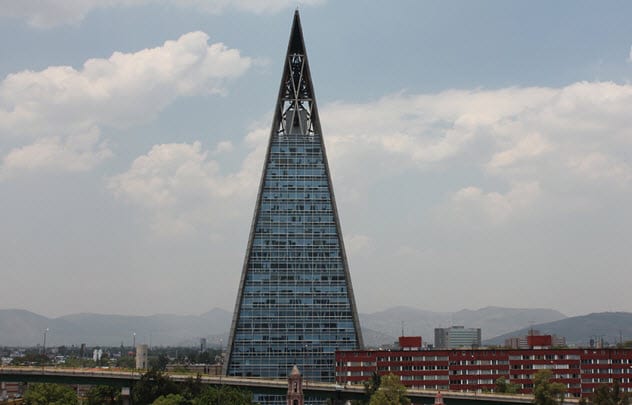 Insignia Tower (aka Torre Insignia) is a 25-floor, triangular skyscraper that was the second-tallest building in Mexico at the time of completion in 1962. Inaugurated in 1964, it was initially used by the administration of a local housing complex. It then became the headquarters of the National Bank of Public Works (aka Banobras) until it was vacated in 1985 due to an earthquake.

The building has sat empty[3] since then. There have been a few attempts to renovate the dilapidated building, the most recent in 2011. Insignia Tower holds historical significance for the area and has a large carillon that was played daily while the building was in use. There is much interest in bringing the building back to relevance. 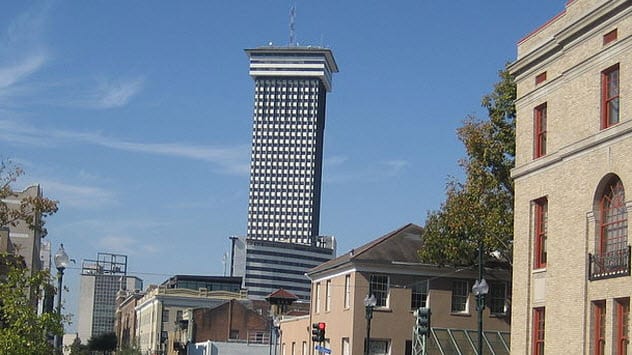 If you look at the New Orleans skyline, one of the first buildings you will notice is Plaza Tower. The 45-story skyscraper was completed in 1968 and is still the third-tallest building in New Orleans.

Primarily used as an office building, it enjoyed constant use until tenants started complaining about mold and asbestos. Those problems persisted, which led to the tower being vacated in 2002. It was then gutted and environmentally abated to remove the mold and asbestos.

The building was auctioned off[4] in 2011 for an undisclosed amount. It is not known if there are plans to restore the building at the moment. Plaza Tower was the tallest building in New Orleans when it was erected and has been a fixture of the New Orleans skyline ever since. 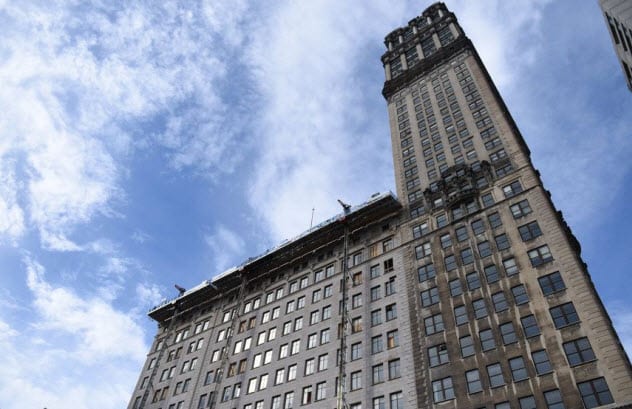 In 1916, a 13-story office building called The Book Building opened in Detroit, Michigan. Ten years later, a 38-story skyscraper was connected to the building and it became known as the Book Tower.

Named after the locally known Book brothers, it was the tallest building in the city for two years before being overtaken by the Penobscot Building in 1928. The building survived the Depression, still in use, and was a relevant part of the city for decades.

But Detroit started hitting hard times[5] in the 1970s, and many offices and businesses left town. As a result, many buildings closed down. Although Book Tower was added to the National Register of Historic Places in 1982, the building was not immune to the city’s decline.

Financial troubles plagued Book Tower. Lawsuits and failed mortgages caused ownership of the building to change hands multiple times, and the number of tenants dwindled. In 2009, its last tenant moved out and it has been closed since. Soon after it closed, Detroit announced plans to convert the building into a residential complex, but action has yet to be taken. 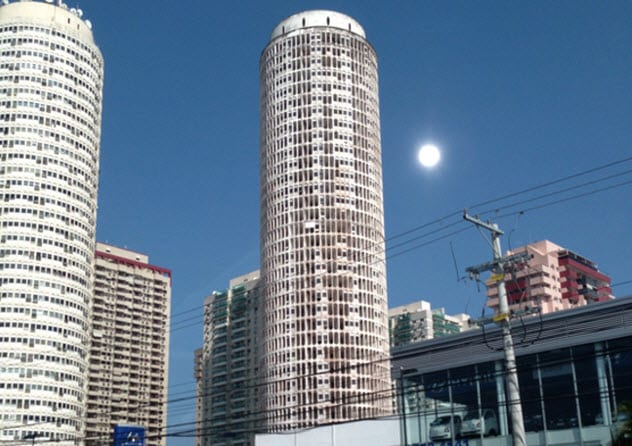 Abraham Lincoln Tower (aka Torre Abraham Lincoln) is one of two towers in Rio de Janeiro that were part of a massive development plan in the 1960s. The project aimed to build 76 residential towers, but only two were built.

The designers were Lucio Costa and Oscar Niemeyer, the two men who designed Brasilia, the capital of Brazil. Construction on Torre Abraham Lincoln began in 1969 but was halted in 1972 due to concerns about structural integrity.[6] It was never finished. 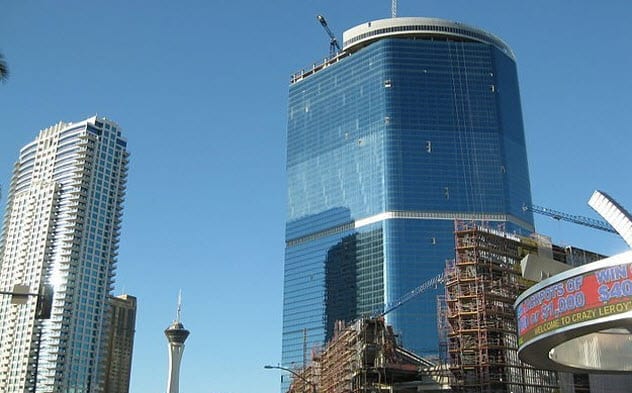 The newest building on this list, Fontainebleau Resort in Las Vegas, broke ground in 2007. The design was for a 220-meter-tall (725 ft) skyscraper consisting of a hotel and resort.

Once completed, it would have been the tallest building in Las Vegas[7] and would have increased revenue even more for the Sin City. Then the recession hit.

Banks that had originally pledged upward of $800 million in loans to complete the building backed out, leading to lawsuits between those banks and Fontainebleau. This led to Fontainebleau (which already operates a location in Miami, Florida) filing for Chapter 11 bankruptcy in 2009. The project never recovered.

The 68-story building sits unfinished on the Las Vegas strip. Since construction was halted, there have been talks of new projects and even sales of the property to new groups. In April 2017, it was announced that the high-rise was approved for the installation of a new exterior. However, the future plans for the building are unclear. 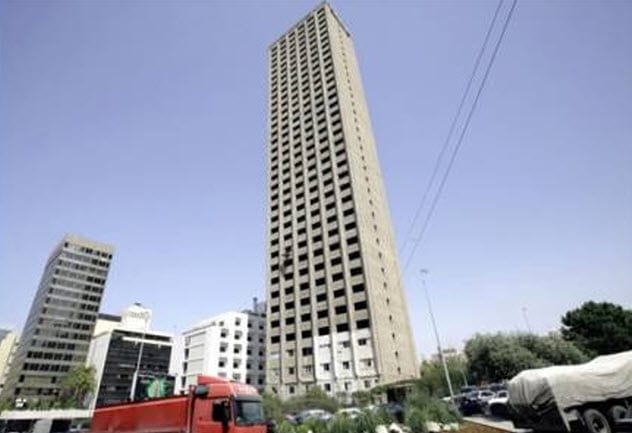 In Beirut, Burj Al Murr is a 34-floor building with seven basement floors that has a rich and important history. The tower was originally meant to be an office building and shopping mall. Construction on the building stopped in 1975, coinciding with the start of the Lebanese Civil War.

Due to the building’s height and location, it was quickly occupied by an armed militia and used as a tactical location during battles in Beirut. Top floors were reportedly used for shooting into the city, and lower floors were used for holding prisoners.

There are many stories about what happened to the building while it was used during the war.[8] Although most of Beirut was destroyed by the war, Burj Al Murr still stood tall.

After it was cleared and the fighting stopped, the building had suffered enough damage that it was no longer fit to be developed. Today, it just stands tall as a reminder of the conflict that decimated the city just a few decades ago. 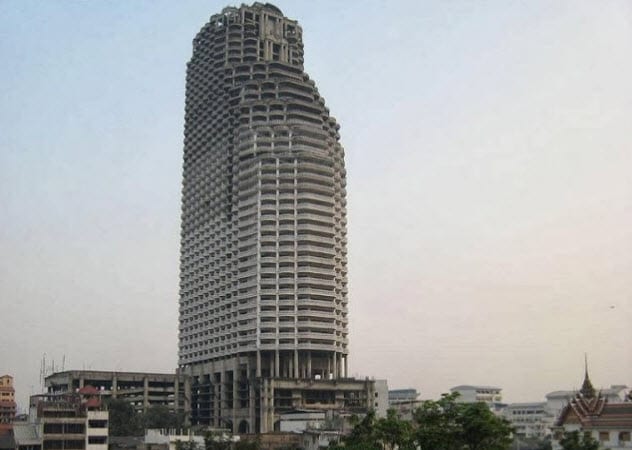 Much like the Fontainebleau Resort, the Sathorn Unique was a building that fell victim to a failing economy.

The Sathorn Unique is a 49-floor skyscraper in Bangkok, Thailand. Construction for the building began in 1990 during an economic boom in the area. The building was being raised steadily and managed to top out right before the Asian financial crisis damaged the economy.[9]

Due to a lack of funds—as well as the building’s designer being arrested for plotting a murder—construction on the building was halted. To this day, it has not resumed.

Today, the Sathorn Unique is known as the “Ghost Tower.” Rumors abound that the graffiti-laden, dilapidated high-rise is haunted. It attracts many thrill seekers and ghost hunters as well as vandals and squatters looking for a place to relax.

This problem became so dire that steps were taken to permanently close the building to the public. However, the occasional trespasser still makes his way into the tower. To this day, there are no plans to finish construction of the Sathorn Unique. Due to its deteriorated state, it may never be completed. 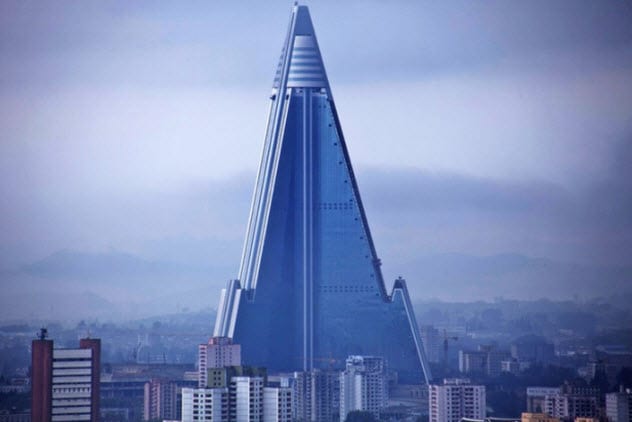 The developers of this massive skyscraper broke ground in Pyongyang in 1987. Had the building been completed on schedule, it was expected to be the tallest hotel in the world. Ryugyong Hotel was the first building outside of New York City or Chicago with over 100 floors. It is the world’s largest hotel . . . and it’s still not finished.

Ryugyong Hotel topped out in 1992, right around the fall of the Soviet Union, and construction came to a halt. The economy of North Korea went into a crisis, and the country had to put the project on hold.

Having already reached maximum height, the building sat as a large concrete eyesore[10] for 16 years. Then, in 2008, construction resumed when an Egyptian company took over the project. A glass exterior was added to the building, but no work was done to the interior before construction was halted again.

In 2013, it was announced that the building would finally open for the first time. But that was canceled because the interior was not completed. Since then, there have been a few rumors about the building finally opening, none of which have come to fruition.

Thirty years after construction started, Ryugyong Hotel has yet to be completed. It is unknown when the building will finally open its doors.