To help you end the week on a positive note, we have gathered all the news that might lift your spirits into one list. This is where you’ll find a nice mix of feel-good stories combined with significant achievements and tales of togetherness. If you want something weird and wacky, check out the offbeat list, too.

This week, we have several stories that highlight friendship, whether it is between two lifelong pen pals, a woman and a dog, or even complete strangers. There are also two positive medical developments and a few inspiring tales of people who overcame huge obstacles. 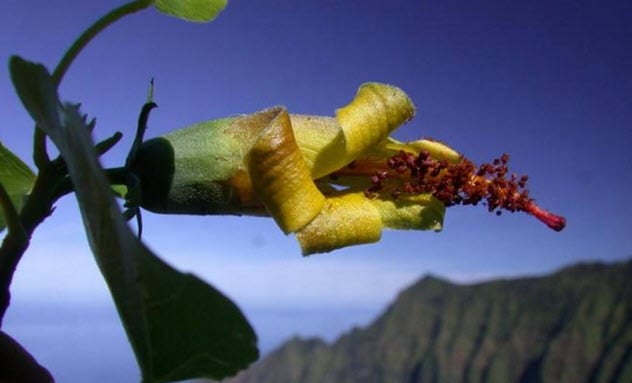 A drone discovered a Hawaiian flower which was thought to be extinct. Researchers from the National Tropical Botanical Garden (NTBG) used the flying machine to explore the remote areas of Kalalau Valley on Kauai. They were stunned when they stumbled upon an example of Hibiscadelphus woodii, last seen alive in 2009.

The flower was on a vertical cliff face, part of a landscape that would otherwise have been inaccessible to humans. This is part of the problem as rock slides and falling boulders are some of the main causes which were assumed to have led to the extinction of the plant.[1]

H. woodii was first located in 1991 and officially described in 1995. Following its recent rediscovery, researchers from the NTBG are hopeful that drone technology can be used to find other species that are either endangered or even considered extinct.

Two pen pals separated by the Pacific Ocean have finally met after 60 years of correspondence.

Back in 1960, 10-year-old Lyn Carpenter from Adelaide, Australia, joined a school program to find a pen pal in Canada. The address she received belonged to Dolores Baily from Pitt Meadows, British Columbia.[2]

The girls quickly bonded as they discovered the things they had in common. They were both big Beatles fans. They both liked to sew and would send each other fabric samples of the pieces they were working on. This relationship continued for 60 years. The women had never met, although they had sent each other photographs while growing up.

There were times when the frequency of the correspondence dipped, such as when they had kids. In the end, though, both women were committed to maintaining the relationship.

The ladies finally came face-to-face this month as Dolores hopped on a plane and went to Lyn in Adelaide. They visited a Beatles memorial, reminiscing about one of the first things over which they bonded. 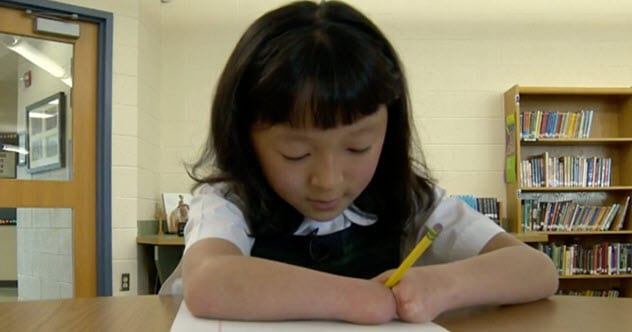 A 10-year-old student from Frederick, Maryland, who was born without hands has won a national writing contest.

Sara Hinesley is this year’s recipient of the Nicholas Maxim Award at the 2019 Zaner-Bloser National Handwriting Contest. The award is judged by occupational therapists and presented to a student with a cognitive delay or an intellectual, physical, or developmental disability.[3]

Despite having no hands, Sara is able to hold a pencil and is very adept at writing in cursive. Her family briefly looked at prostheses but decided against them for now because Sara is doing fine without them. Besides writing, she is also proficient at creating art, swimming, and riding her bike.

The student’s award comes with a trophy and a $500 money prize plus another $500 in educational materials for her school. 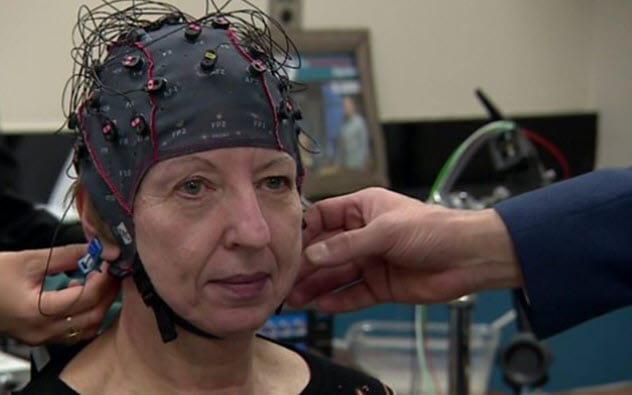 Canadian researchers from London, Ontario, have developed an implant which has restored movement to homebound people suffering from chronic Parkinson’s disease.

As the condition advances, many patients find it difficult to walk as they often freeze in place and fall over. However, a team led by Professor Mandar Jog from Western University has seen great results from an implant which boosts the signals from the legs to the brain and vice versa.[4]

The biggest surprise was that the treatment continues to be effective even when the implant is turned off. Some of the patients who took part in the study have been able to resume their outdoor activities following a few months of using the implant.

Parkinson’s researchers who were not involved in the study called the results “very promising” as they could vastly improve the quality of life of patients. However, it was only a small-scale pilot study which will need further investigation going forward.

The city of Mount Vernon, Washington, is home to an unusual friendship between a 95-year-old widow named Miss Sally and a giant, lovable St. Bernard named Brody.

The pooch belongs to Dave Mazzarella who brought Brody home from Tula, Russia, when he was just 12 weeks old. One day, the two of them were outside when their elderly neighbor, Miss Sally, went out to her mailbox. As it happened, Brody ran right up to her and she had a treat handy.[5]

The two became instant friends and have been inseparable ever since. As Mazzarella bluntly puts it, Brody couldn’t care less about being with him whenever Miss Sally is around.

That bond has been going strong for two years now. It has also extended to Brody’s little sister, Lulu, who enjoyed spending the sunny days on the porch snuggled up to Miss Sally. The pensioner had to move to an assisted living home following a health scare, but she is close enough that the dogs visit her every week.

5 The Bees Of Notre Dame 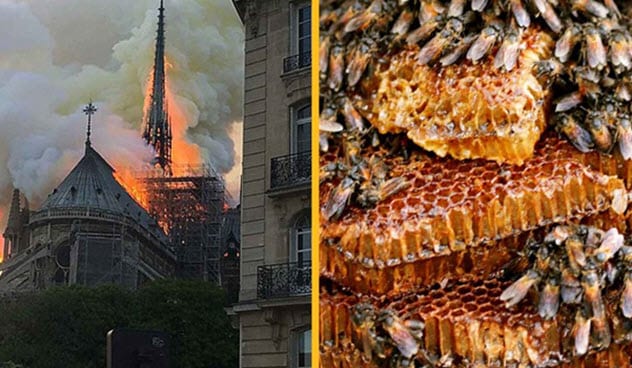 There is another bit of good news following the Notre Dame fire as the bees that live in the cathedral appear to be alive and well.

The structure was home to around 180,000 honeybees that were split into three large hives. They were located on a roof above the sacristy, approximately 30 meters (100 ft) below the main roof which sustained heavy fire damage.

A quick visual inspection revealed that the hives had not been damaged by fire, but this did not mean that the bees were safe. There was concern that the high temperatures from the flames could have melted the wax, killing everything inside the hives.

It wasn’t until last Thursday that the cathedral’s beekeeper, Nicolas Geant, could confirm that bees were buzzing around outside the hive, seemingly unaffected by the fire.[6] 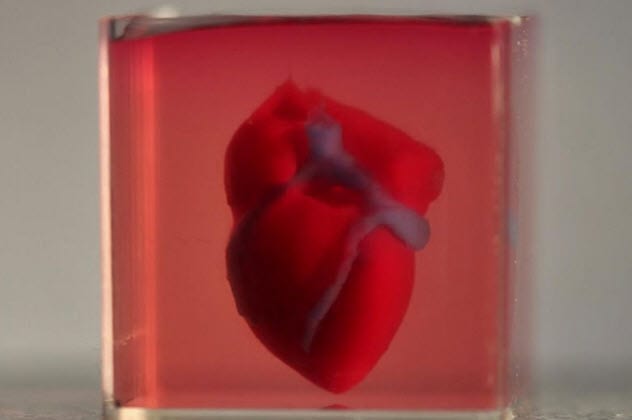 In a world first which could have a huge impact on organ transplants in the future, Israeli researchers from Tel Aviv University claim they have 3-D printed a tiny heart using human tissue.

As described in Advanced Science, the prototype is roughly the size of a rabbit’s heart. However, lead author Tal Dvir says that larger hearts would rely on the same technology so it would be feasible to make ones suitable for humans.

The process of 3-D printing the muscular organ was dependent on the right raw material. To obtain it, scientists extracted fatty tissue from a human patient and then broke it down into its component cells. These were turned into a special bio-ink gel for the 3-D printer. After several hours, the machine turned the gel into a tiny heart modeled off CT scans and an artist’s rendering.[7]

Although impressive, the heart is not “alive” yet. The cells can contract, but they cannot pump blood because they do not “beat in unison.” The next stage will have to wait roughly a month so that the cells can mature. If that step proves successful, the team hopes that the heart will be ready to be transplanted into an animal subject. 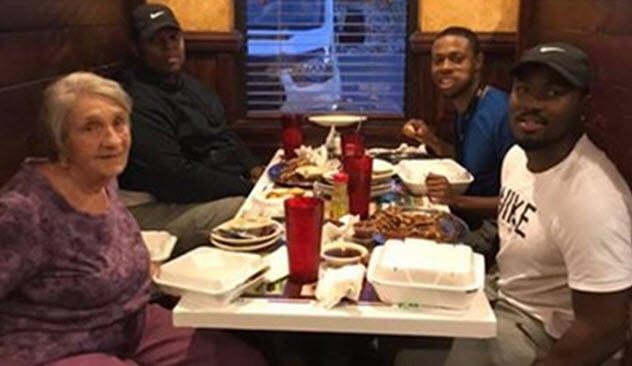 A small gesture from three men ended up having a big impact because it came at the right place and the right time.

One night, Jamario Howard went to a diner named Brad’s in Oxford, Alabama, with two friends. While they were waiting for their food, Howard spotted an elderly woman sitting solo.

Thinking that he would hate it if he had to eat alone, he went up to her and asked to sit down. The two quickly struck up a friendly conversation. When the food was ready, the lady excitedly accepted Howard’s invitation to join the three of them for dinner.

This act of kindness was perfectly timed. The woman named Eleanor was a widow. The following day would have been her 60th anniversary with her husband which she was getting ready to spend alone.[8]

The foursome enjoyed a 45-minute dinner during which Eleanor talked about her grandchildren and the volunteer work she does at the hospital. It seems that she and Howard really hit it off as the two have met a few more times since then and plan to stay in touch.


2 The Happiest Person On Earth 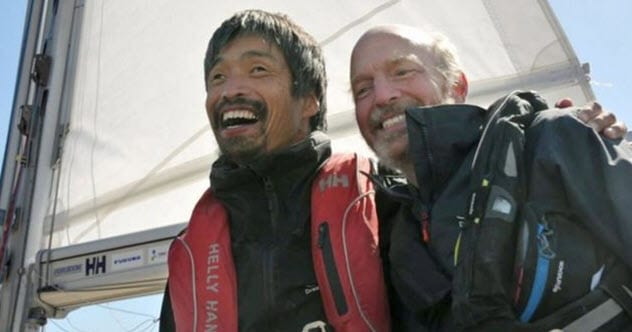 A blind Japanese sailor completed a nonstop crossing of the Pacific Ocean. Assisted by a sighted navigator, 52-year-old Mitsuhiro Iwamoto set off from California on February 24 and reached Fukushima last Saturday morning.

The Japanese seaman sailed 14,000 kilometers (8,700 mi) in a 12-meter-long (40 ft) yacht. He steered the vessel at all times while his navigator, American Doug Smith, advised him on any potential hazards along the way.

Iwamoto described his success as a “dream come true” and declared himself to be the “happiest person on Earth.” According to the Japan Blind Sailing Association, he is the first blind person to do a nonstop crossing of the Pacific. His journey also benefited multiple charities that prevent diseases which lead to blindness.[9]

This is the sailor’s second attempt. His first crossing occurred in 2013 and failed. Iwamoto’s ship sank after hitting a whale, and the seafarer had to be rescued by Japanese military.

1 Waking Up From A Coma 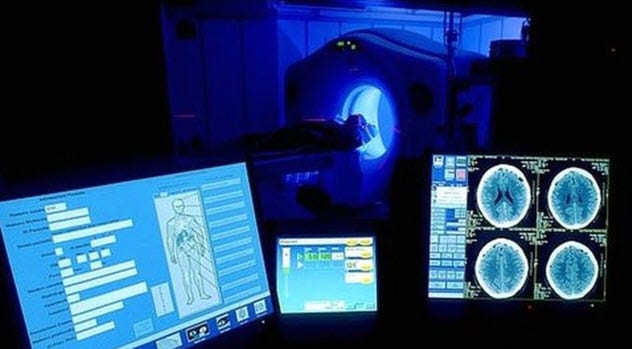 An Emirati woman has awakened after spending the last 27 years in a coma following a car crash.

Back in 1991, Munira Abdulla was a 32-year-old mother. When the accident happened, she was on her way to pick up her son from school when her car collided with a bus. Munira was actually in the back seat, holding her other child, four-year-old Omar Webair.

The boy escaped mostly unscathed because his mother had cradled him for protection shortly before impact. Abdula, however, suffered severe brain injury and was left in a comatose state.

She spent most of the next three decades in various hospitals in the United Arab Emirates (UAE) and London. In 2017, her family received a government grant from the UAE to take her to a specialized facility in Germany.

There, she received medications to improve her condition and surgeries to correct her shortened arm and leg muscles. A year later, she woke up. Her son Omar was there, and his name was the first word she spoke.[10]

In the months since then, Munira has returned to the UAE and continued her rehabilitation. She has become more responsive and can hold conversations. Omar has decided to share her story to encourage others “not to lose hope on their loved ones.”