How well do you know your heart? Clench your fist. That’s about how big it is. The adult human heart weighs about 300 grams and is responsible for supplying the body tissues and organs with oxygen and nutrients as well as removing carbon dioxide and other waste products.

To do this efficiently, your heart has four chambers—a wonder of evolutionary engineering. The two chambers on the right side of the heart deal with deoxygenated blood. The top chamber (right atrium) receives it, and the bottom chamber (right ventricle) pumps it to the lungs for more oxygen. The left side of the heart receives the oxygenated blood from the lungs (in the left atrium) and then pumps it out (via the left ventricle) to the body.

Human blood is red due to the presence of the protein hemoglobin. Hemoglobin contains iron, which attracts oxygen molecules, and the bonds between the iron and oxygen reflect red light.[1] Even though the veins under your skin appear blue, the blood inside them is red. Deoxygenated blood is still red, just a darker shade. If you cut yourself and your blood is blue, you had best get your DNA checked. You might be an octopus.

At rest, the human heart beats 60 to 100 times per minute. Elite athletes generally have a lower resting heart rate than other mortals. Your maximum heart rate is about 220 minus your age.

But not all hearts are created equal. Some members of the animal kingdom deal with circulation in mind-bending ways. 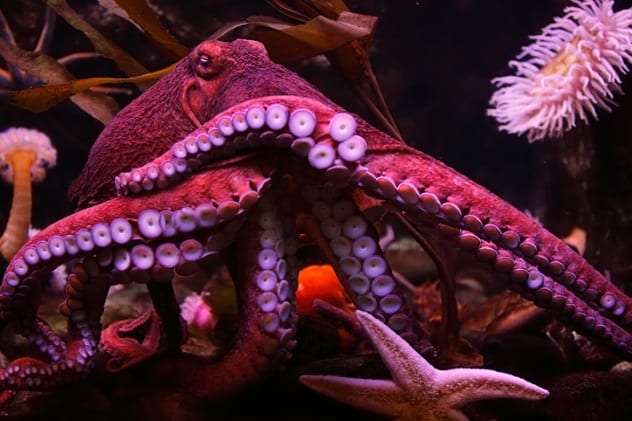 An octopus, like its other comrades in the cephalopod world, has three hearts. Two hearts are dedicated to pumping blood to the gills, while the other takes care of the rest of the body. Unlike humans, octopuses have blue blood. Their blood lacks hemoglobin, the protein that gives human blood its red color. Instead, they rely on the copper-rich protein hemocyanin to perform oxygen transport duties, as it is more efficient in low-temperature and low-oxygen environments.[2]

Ever wondered why octopuses spend more time crawling than swimming? The answer: fatigue. Because the heart powering the body stops beating when the octopus is swimming, it tires more quickly.

By the way, “octopuses” is the plural of “octopus”—not “octopi.” If the word “octopus” had come from Latin, “octopi” would be correct. However, the Greeks can take credit for “octopus,” so the appropriate way to pluralize is simply to add “-es.” 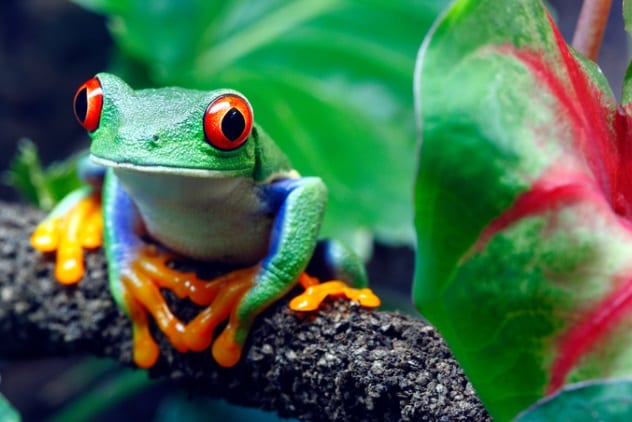 Fairy tale princesses take note: Frogs have three-chambered hearts. If you turn a frog into a prince, he will likely require medical attention for life in human form.

Like humans, frogs have two atria, but they have only one ventricle. The four-chamber human system means that oxygenated and deoxygenated blood remain separate, but in frogs, the blood is mixed when the left and right atria empty into the single ventricle. Does that sound inefficient? It is, but being relatively small and having low metabolisms, frogs don’t need to be as efficient as larger animals. And this is where the frog-turned-prince is going to have trouble—unless he retains the ability to breathe through his skin. Frogs absorb oxygen into their blood through their skin as well as from their lungs.[3] Supplementing their oxygen supply in this way allows them to overcome the inefficiency of the one-ventricle system.

One final cautionary note for princesses: Hide the bath towels. If your prince breathes through his skin, it must remain moist at all times. 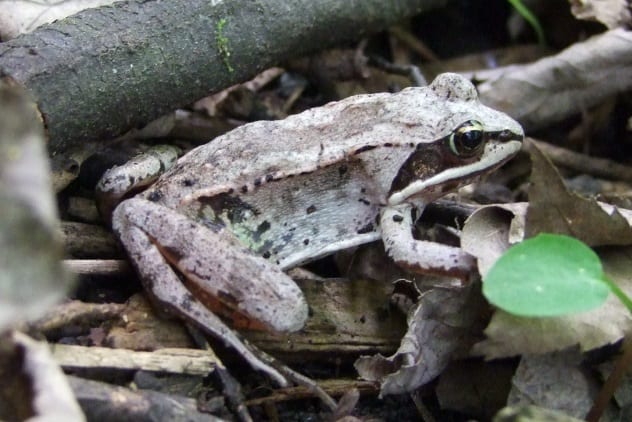 When we think of creatures of the Arctic, we don’t generally think of frogs. That’s because the Arctic is really cold. They would freeze, would they not? The answer to that question, unsurprisingly, is yes. But for one species of wood frog, Rana sylvatica, this is not a problem.

In winter, when temperatures plummet, the wood frog freezes, and its heart stops beating—sometimes for days, or even weeks, at a time. Once the temperature rises, though, the frogs thaw out, and their hearts restart. The amphibians are as good as new. This is not only astonishing but also potentially useful to humans.

Scientists working in the field of organ transplantation are keen to unlock the secret of the wood frog’s cryoprotectants (the processes that help them survive freezing). The ability to freeze and then thaw human hearts would revolutionize the transplantation process.[4] Those waiting for a heart would no longer have to be in the right place at the right time. Donor hearts could be frozen and transported to recipients, wherever they might be, potentially saving many more lives. Be still, my beating heart . . . 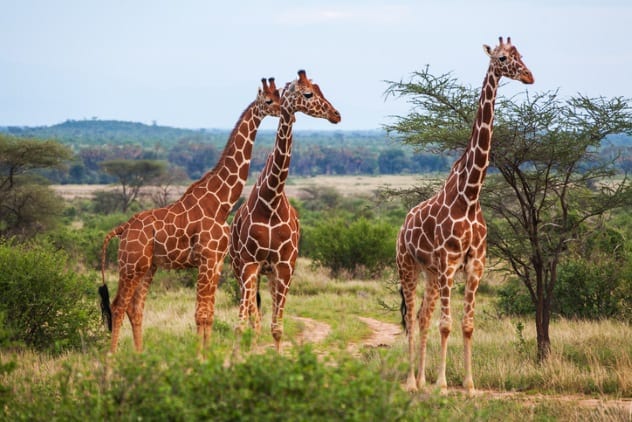 Pumping blood up to a giraffe’s brain takes a lot of power, and a human heart would not be up to the task. Luckily, the giraffe has the hardware to push blood all the way around its supersized body. At 60 centimeters (24 in) long and weighing in at 11 kilograms (24 lb), the giraffe heart is in the heavyweight division. Not only does blood need to defy gravity for 1.8 meters (6 ft) to get to the creature’s head, but it travels about the same distance to reach the giraffe’s feet. Gravity helps it on the way down, true, but once the blood gets to the bottom, there needs to be enough pressure behind it to get back up again.[5] Otherwise, giraffes would have really fat ankles.

Have you ever felt light-headed after standing up to quickly? That is the result of a sudden drop in blood pressure. Giraffes move their heads around a lot. They should be permanently dizzy. A combination of nifty adaptations prevents this, though. Giraffes have an unusual jugular vein. This is the vein that carries blood back to the heart from the head, and in most animals, it does not contain muscle. The giraffe’s jugular vein does. This muscled jugular vein, along with its thick skin and powerful ticker, increases the animal’s blood pressure to about twice that of humans. 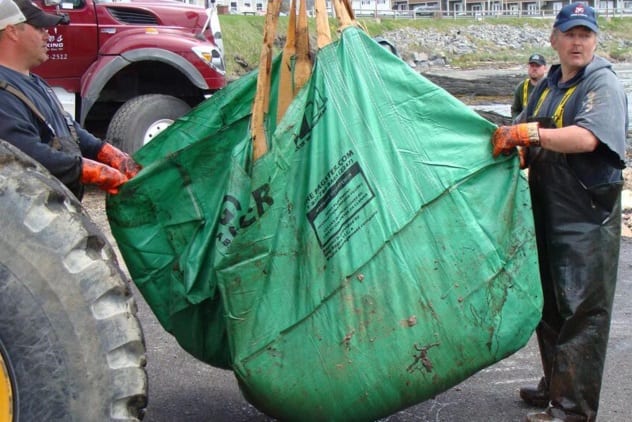 It’s no surprise that the biggest animal on Earth has the biggest heart. But is the blue whale heart really the size of a small car? In the absence of actual blue whale specimens, scientists could only guess at the size of the giant mammal’s heart. In 2014, though, scientists from the Royal Ontario Museum embarked on an audacious mission: to preserve the remains of a blue whale that had perished in ice off Newfoundland. Most blue whale carcasses sink to the ocean floor, so this event provided a unique opportunity.

Recovering the heart was a priority. Scientists opened the chest cavity before venturing inside the carcass to retrieve the heart. Waist-deep in blood and lungs, the scientists freed the heart from the surrounding tissue. It then took four of them to push it out through the opening they had made.

The heart weighed 180 kilograms (400 lb) and was capable of pumping 150 liters (40 gal) of blood per beat.[6] At 1.2 meters (4 ft) in diameter, it was not quite as big as a car but rather about the size of a golf cart. Still, retrieving a blue whale heart is not for the fainthearted. 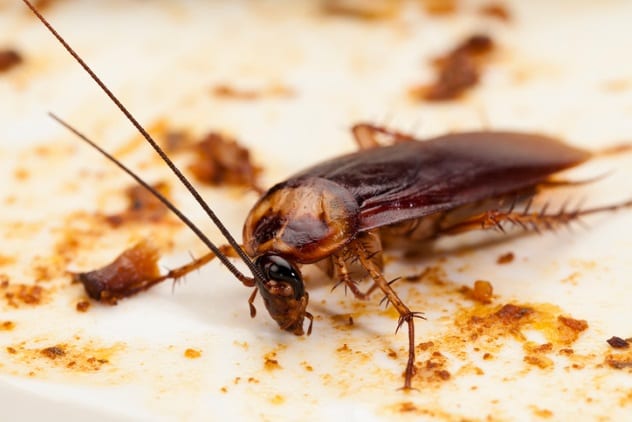 The hearts of these much-maligned insects have 12 or 13 chambers, but rather than blood, the cockroach heart moves a whiteish/yellowish substance called hemolymph through their bodies. The nutrient-rich hemolymph nourishes the organs but does not carry oxygen, as insects are oxygenated through openings in their body surface.

Even with the most powerful stethoscope, you will not detect a cockroach heartbeat. Their hearts do not beat. Muscles in the body cavity contract and relax to move the gooey hemolymph through the heart.[7] 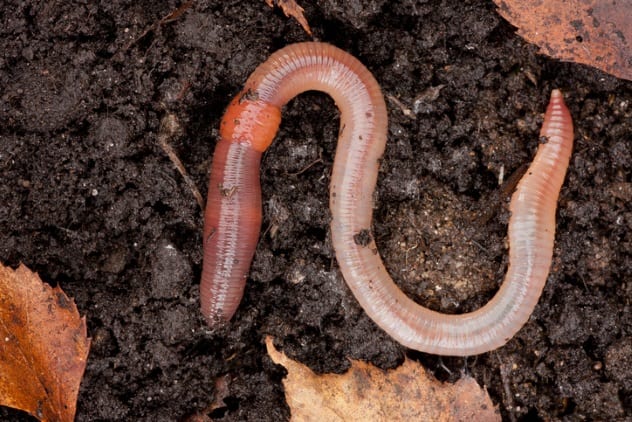 Do earthworms even have hearts? Sort of. Earthworms have five pseudohearts entwined around their esophagus. These pseudohearts squeeze, rather than pump, the blood vessels to circulate blood.[8] So, like cockroaches, earthworms do not have a heartbeat.

Unlike cockroaches, however, earthworm blood is red because it contains hemoglobin. Curiously, they do not actually need hemoglobin to supply their bodies with oxygen. Earthworms claim their oxygen by breathing through their skin. 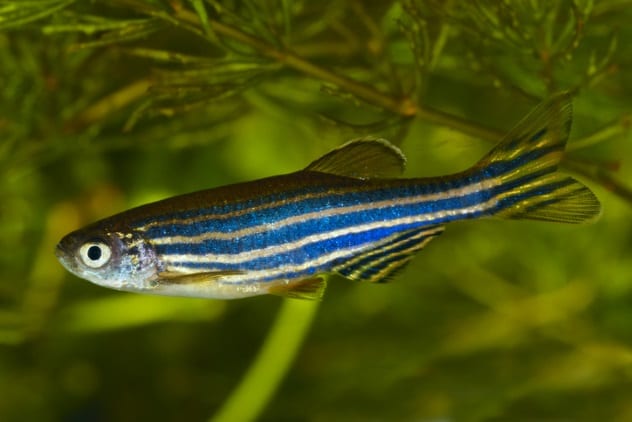 Most fish hearts have only two chambers, and the zebrafish, native to Southeast Asia, is no exception. Aside from having half the number of chambers of a human heart, a zebrafish heart does a similar job. It delivers oxygenated blood to the various body organs. The oxygen is obtained from gills rather than lungs, which works swimmingly well for aquatic creatures.

You might think that we humans have little in common with zebrafish, but scientists think otherwise. Zebrafish are growing in popularity in medical research labs around the world because of their physiological similarities to humans. For a start, they are vertebrates with a backbone, brain, and spinal cord. They also have a heart, liver, pancreas, kidneys, bones, and cartilage. In addition, 70 percent of human genes are found in zebrafish.[9] So, if you have any of these quirky critters in your aquarium at home, go and take a closer at them. And thank them for the vital work their brethren are doing to advance medical research around the globe. 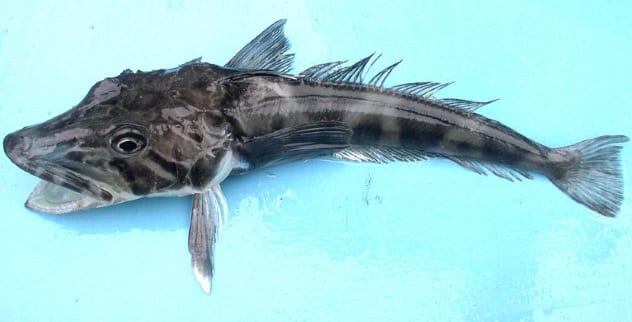 The ocellated icefish continues to defy scientific explanation. It is the only vertebrate that does not have hemoglobin in its blood, which is clear, rather than red. The heart of an ocellated icefish is much larger and stronger than your average fish heart—about five times so. Scientists believe it has something to do with their icy environment.

Antarctic waters are notoriously inhospitable but are richer in oxygen than warmer waters. It is possible that these scaleless fish absorb oxygen from the water through their skin. Then, rather than attaching to hemoglobin, at these low temperatures, oxygen could be dissolved directly into the blood plasma.[10] If human blood was clear, think of how horror film sequences would lose their impact. 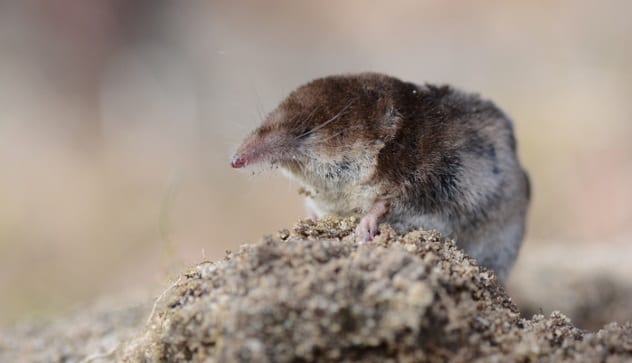 The prize for the mammal with the fastest heart rate goes to the pygmy shrew. Generally, the smaller an animal is, the faster its heart rate is—and the pygmy shrew is tiny. Sorex hoyi weighs about 3 grams, and you could lose one in your cereal bowl.

The pygmy Shrew’s heart rate is over 1,000 beats per minute—or 16 beats per second![11] Pity the shrew embarking on a fitness regime. Imagine trying to monitor its target heart rate. It certainly wouldn’t be 220 minus age . . .