There is a lot of doom and gloom in the news. It can get anyone down, but this list serves as the perfect counterpoint. Only stories that inspire, uplift, or amuse can be found here. Alternatively, we can also bewilder, bemuse, and befog you with our offbeat list.

If daring rescues are your thing, then this list has them in spades. Well, three of them, to be exact. There’s also a heartwarming lottery winner story, a semi-royal wedding, and a clever new use for our urine. 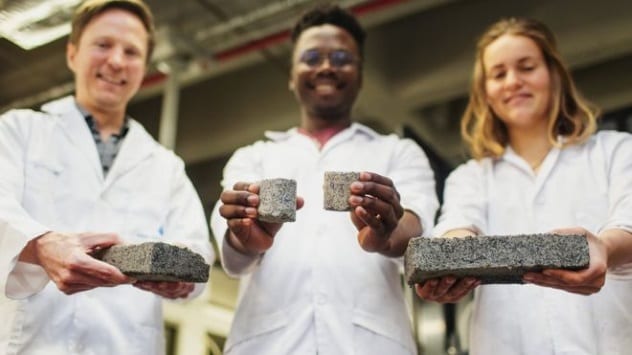 South African students from Cape Town have created the first-ever bio-brick made from human urine. The bricks are odorless, safe, hard as limestone, and, most important of all, can be made at room temperature without the need to power kilns.

Regular bricks must be baked at temperatures around 1,400 degrees Celsius (2,550 °F), which produces large amounts of carbon dioxide. This new method combines urine with sand and bacteria in a process which is similar to coral formation. Its scientific name is microbial carbonate precipitation. An enzyme in the bacteria breaks down the urea in the urine and produces calcium carbonate, which can bond to the sand to create solid bricks.[1]

The idea of “growing” bricks using urea was first explored by an American team a few years back. However, they used synthetic urea, which made the whole process energy-inefficient, so they dropped the project. The team at the University of Cape Town is the first to use real human urine. When they started, their end product had roughly 40 percent the strength of a regular limestone brick. Now, they’ve doubled that strength just by tweaking the quantities and durations used in the process.

Let’s get to the elephant in the room. The bricks are made of urine. The scientist in charge, Dr. Dyllon Randall, admits that the procedure can be a bit smelly because it produces ammonia. However, after 48 hours, the bricks lose the odor, and the chemical process kills all harmful microbes. Furthermore, the resultant ammonia can be used for nitrogen-rich fertilizer.


9 Elderly Man Breaks His Hip, But Wins The Lottery 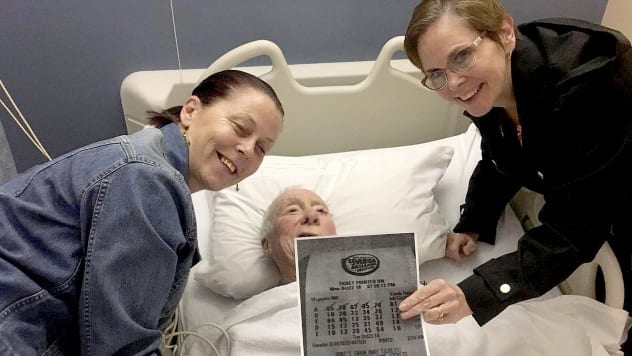 A hospital patient was lamenting the fact that he couldn’t get a lotto ticket, so hospital workers let him be part of their weekly lottery pool. They then won $1 million.

Octogenarian Earl Livingston from Blackwood, New Jersey, is a lottery enthusiast who goes to his local store every Tuesday to buy a ticket. His plans were derailed last week, as he fell down on the way, broke his hip, and had to be admitted to Jefferson Stratford Hospital. A sympathetic physician’s assistant chipped in the $2 entry fee to let Earl enter their hospital pool.

This was intended just as a small gesture to cheer up the patient. But the ticket got five numbers right and won $1 million. The prize will be split among 141 people, so it only amounts to $4,500 per person.[2] However, Earl was still touched by his caregivers’ kindness and plans to use his share toward his taxes.

8 Take One Down, Pass It Around 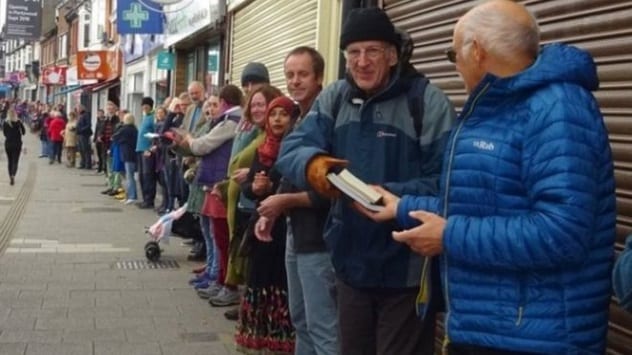 October Books has been open for business in Southampton, England, since 1977. For the last 15 years, the bookstore has been in the same place, but it recently had to relocate after a rent increase left it unable to afford its old premises. The owners raised funds with the help of local businesses and residents and bought a new space down the road. All that was left was moving the thousands of books from one place to another.

The community stepped in to help again. They formed a human chain that stretched the roughly 150 meters (500 ft) from the old store to the new. Local families, shopkeepers, and general passersby joined in as the chain got longer and longer. They passed along 2,000 books from one another, but 18,000 more are still left to go before the new shop can open.[3] Dozens of people have already volunteered to help with the rest of the move.

7 Kangaroo Rescue At the Beach 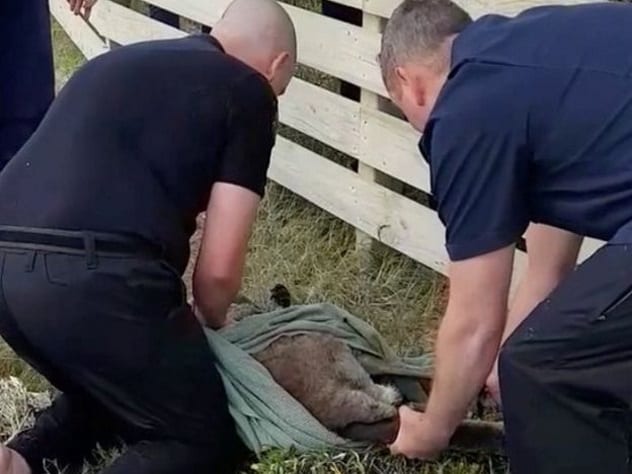 Last Saturday afternoon, people were enjoying the sun at Safety Beach on Mornington Peninsula when they saw a kangaroo bounce his way across the road, onto the beach, and into the water. At first, it simply looked like the marsupial fancied a swim, but the animal soon got caught in the backwash and was struggling to keep its head above the water. A few beachgoers managed to drag it ashore and called the police.

Unfortunately, the animal was scared and exhausted and made a rash decision. As officers arrived, it headed back into the ocean. This time, it went under almost immediately and had foam coming out of its nose whenever it surfaced. Two policemen realized the roo was drowning and went in after it.[4] Sergeants Christopher Russo and Kirby Tonkin dragged the animal out of the water by its tail but realized it was unconscious. They performed chest compressions, which eventually revived the kangaroo. It was taken to recover at a wildlife center before being released back into the wild. 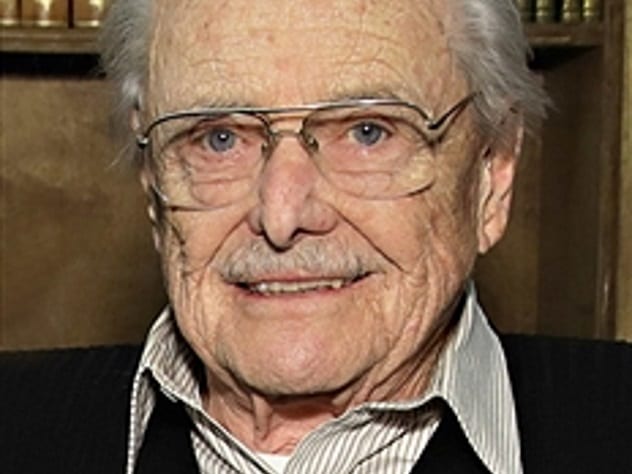 The Los Angeles Police Department said that there was an attempted burglary last Saturday night but would not disclose the identity of the intended victim. However, a spokesperson for Daniels revealed that the would-be robber targeted the house of the 91-year-old actor.[5] Daniels joked that he was able to tackle the intruder to the ground, beat him up, and send him running covered in bruises. He stressed that that was all a “total lie” and that, instead, the criminal simply ran away when the actor turned on the light.

Many people who grew up in the 1990s remember William Daniels as the wisdom-dispensing neighbor and teacher Mr. Feeny on Boy Meets World, one of the most popular sitcoms of that era. He also voiced KITT in Knight Rider. Many fans took to social media to express their relief that the actor is safe and sound the only way they knew how—through memes. 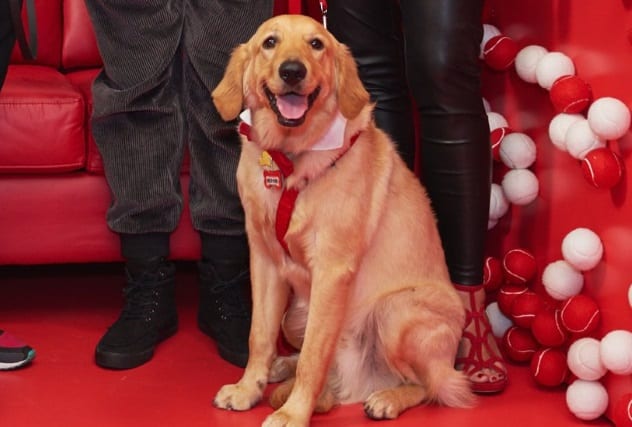 Todd the Golden Retriever was named the inaugural “dog of the year” during the 8th Annual Streamy Awards. In July, the then-six-month-old pup went viral after saving his owner from a rattlesnake.

That month, Paula Godwin was hiking with her dogs when she came close to the venomous rattler. The snake tried to bite her, but Todd jumped in front of her leg and was bitten instead. She later posted a few photos of the pooch at the vet. The right side of his face was swollen due to the bite, but he eventually made a full recovery. Todd’s brave actions won over the Internet, so he became a finalist for the first-ever “Milk-Bone Dog of the Year” Award at the Streamys.[6]

The Streamys are an award ceremony which recognizes excellence in online video. Todd had some stiff competition in the form of Louboutina, “The Hugging Dog,” and Pierre, a therapy dog that dresses as different characters when he works with sick children. Fans declared Todd the winner through an online vote. He earned a trophy and a customized piece of art. 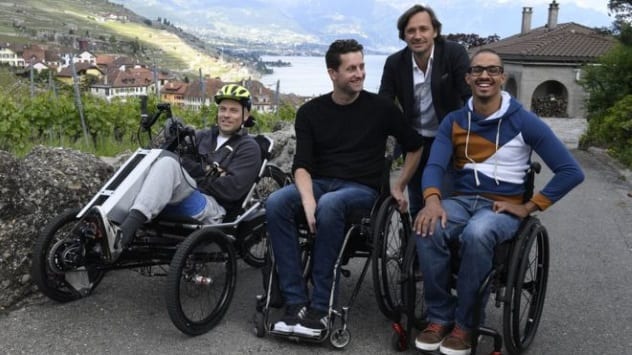 Three men who were told they would spend the rest of their lives in wheelchairs were able to walk again following spinal implants.

The results, published in Nature, were courtesy of a team at Ecole Polytechnique Federale de Lausanne (EPFL) in Switzerland. The three patients had electrical devices fitted around their spines to boost the signal from their brains to their legs. In a positive twist that surprised even the doctors involved, the implant also began to help regrow damaged nerves in the spinal cord.

The first recipient of the implant was 30-year-old Swiss man David M’zee. He has been in a wheelchair for the last seven years following a sporting accident. Now, when his implant is turned on, he can walk almost 1 kilometer (0.6 mi). Even without it, he can manage up to eight paces, which is a first for chronic spinal injury.[7]

There are some drawbacks. The signals emitted by the implant are uncomfortable and cannot be kept on for extended periods of time. The device is also expensive and not reliable enough for day-to-day use outside laboratory conditions. However, researchers will continue work on the implant and are hopeful to begin larger trials in Europe and the US in three years. 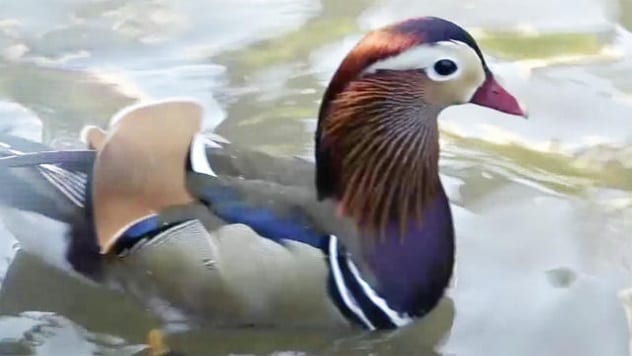 New York City bird-watchers are confused but delighted at the presence of a male mandarin duck in the city’s Central Park.

The males of this species are known for their bright, multicolored plumage. They are also supposed to be found in East Asia and not in Manhattan. However, most avian enthusiasts are too excited to worry about such details.

The bird was first spotted on October 10 in the Central Park Pond. It then disappeared for a few weeks, prompting worries that it might have been killed by a raptor. However, the duck reappeared last week and even made a few mallard friends. Since then, bird-watchers, tourists, and even school field trips have been flocking to the Pond to snap a few shots of the rare animal.

There is still a question of where the bird came from. It didn’t escape from any of the city zoos. Likely, it either flew on its own from a neighboring town or was released by an owner who was keeping it as a pet against city regulations. Park officials announced they have no plans to capture the duck unless it is injured or in danger.[8] Bird experts say the fowl looks healthy and should find plenty of food in the Pond.

2 Fishermen Have Whale Of A Time

A fisherman risked life and limb when he rescued an entangled humpback whale by jumping on its back and cutting it loose.

One day, Sam Synstelien and his partner Nicholas Taron were heading back home into Morro Bay on California’s Central Coast after hours of eel fishing. They spotted a whale which appeared to be in distress, as it was swimming in counterclockwise circles. Closer observation revealed that it was tangled in a rope attached to a buoy and couldn’t get free.

The fishermen first took the sensible approach and alerted the US Coast Guard. However, they said it would take hours before being able to respond. Fearing that the whale might not have that long, Synstelien took matters into his own hands. He leaped onto the cetacean while Taron filmed the whole thing.[9] At first, the fishermen said the animal struggled a lot and spouted water. However, it eventually calmed down, and Synstelien was able to cut the rope tying the animal down.

A spokesman for the National Oceanic and Atmospheric Administration (NOAA) commended the bravery of the rescuer but warned that it could have ended tragically for both man and whale. He also pointed out that it is a misconception that stressed marine animals will die within hours and that there was plenty of time for a safer, professional rescue. 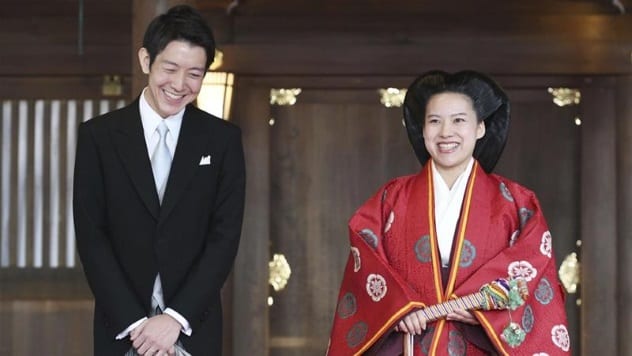 In a Disney movie, this would be the happy ending where the royal willingly gives up their title in order to marry the one they truly love. In real life, this was the wedding of Princess Ayako to Kei Moriya at the Meiji Shrine in Tokyo.

The 28-year-old princess is the daughter of the late Norihito, cousin of the current emperor of Japan, Akihito. She wanted to marry Kei Moriya, who, although a successful businessman with Nippon Yusen, is a commoner. In accordance with Japanese imperial law, Ayako would have to give up her status, titles, and allowance in order to do so.[10]

This didn’t deter Ayako as the couple went through with the wedding on October 29. They observed multiple Shinto rituals, but when they emerged from the shrine, Ayako was no longer a princess. Even so, she will receive a lump sum payment of 107 million yen ($950,000). In a break with tradition, she will also maintain two honorary titles, those of nominal president of the Canada-Japan Society and the Japan Sea Cadet Federation.