Transgender. Just the word itself is enough to evoke strong emotions on both sides of the political aisle. No matter how you feel about transgender people, there is no denying it is a complicated issue. A fear of offending others or saying things that are deemed wrong can prevent as open a discussion on this subject as is possible. Not one to shy away from a controversial topic, Listverse does not intend to follow suit. Consequently, here are 10 uncomfortable facts about transgenderism that are not as widely known as they should be. 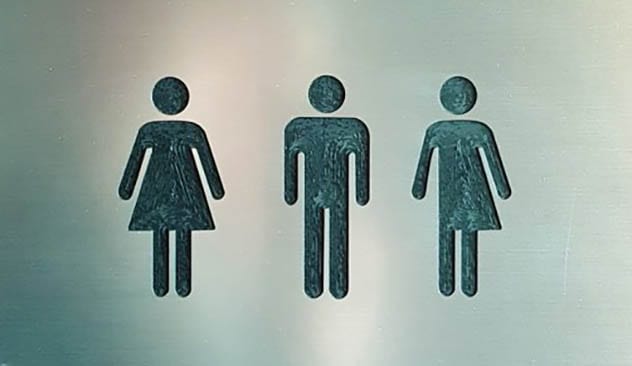 Given the incredible amount of news stories which seem to come out regularly, detailing the pronoun or bathroom usage of people, you might be forgiven if you thought they represented a large portion of the U.S. population. However, that is not the case. If anything, they are one of the smallest minority groups in the entire country.

A 2016 study, which looked at various surveys during the previous nine years, concluded two things. Firstly, the proportion of transgender individuals is growing over time. Secondly, that number is still incredibly small: only about 1 in every 250 adults, or 0.4%. For comparison, all lesbian, gay or bisexual people in the U.S. only account for about 4.0% With that knowledge, it must be surprising that so many people concern themselves with the lives of that small of a population.[1] 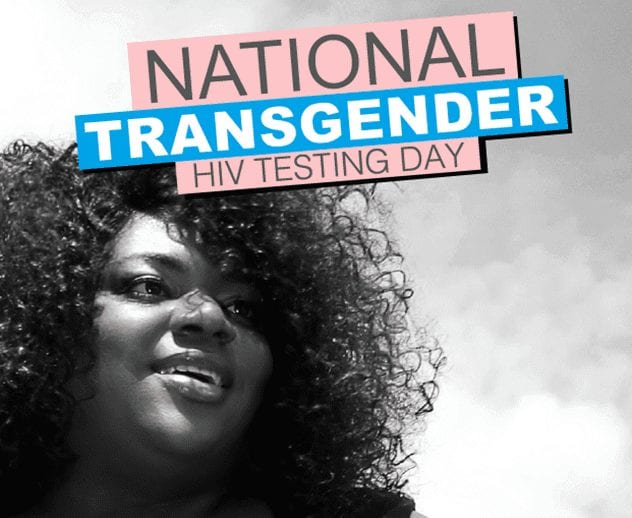 According to the Centers for Disease Control, there are a number of interesting facts regarding transgenderism and HIV. In total, they are three times more likely than the national average to receive a new diagnosis of the disease. Stigma and discrimination, factors which affect transgender people more than other groups, are often cited as the reason for the higher percentages. 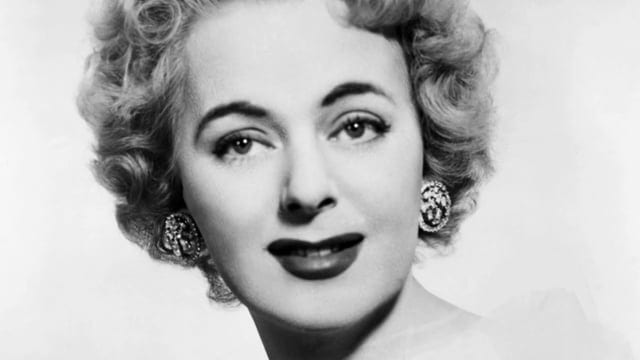 Though it might seem to be a relatively new phenomenon, transgender surgery, or sex reassignment surgery, has been around for a long time. The first surgery performed for a transgender individual was a mastectomy in 1926, done by the famous clinic of the German sexologist Magnus Hirschfeld. The first penectomy was done four years later, with the world’s first vaginoplasty the following year. (Unfortunately, the patient died shortly after.)

The first American to undergo surgery was Christine Jorgenson. In 1952, she traveled to Denmark and had it performed by Christian Hamburger. (She even chose her name to honor him.) Perhaps due to her beautiful looks and flowing blond hair, Jorgenson was well-received by the American public, becoming an icon for transgender people for decades afterwards.[3] 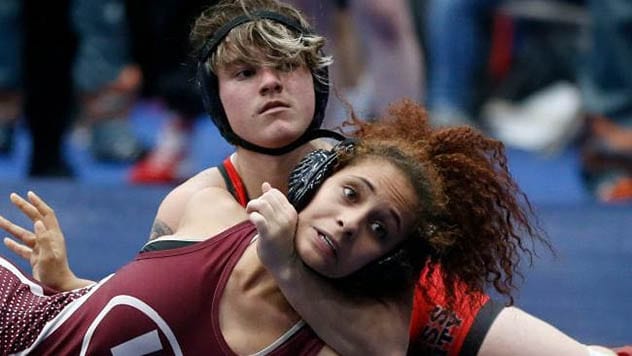 Most people might not be aware of this but the International Olympic Committee has actually allowed transgender people to participate since 2003. Nearly everyone is ok with transgender men competing but many see transgender women as having an unfair advantage. Perhaps to combat that belief, the IOC instituted some very specific rules around the testosterone levels in their female athletes.

Given those hormone requirements, it would seem to be a level playing field. Because where is the line drawn? For many Olympic sports, there are weight categories, which would eliminate some of the advantages. Furthermore, what about Caster Semenya? Born a woman, her body naturally produces more testosterone than the average woman. Is it fair to ban her, if she doesn’t lower her hormone levels to a “fairer” level? And if she can compete with lower testosterone levels, why can’t a transgender woman who does the same?[4] 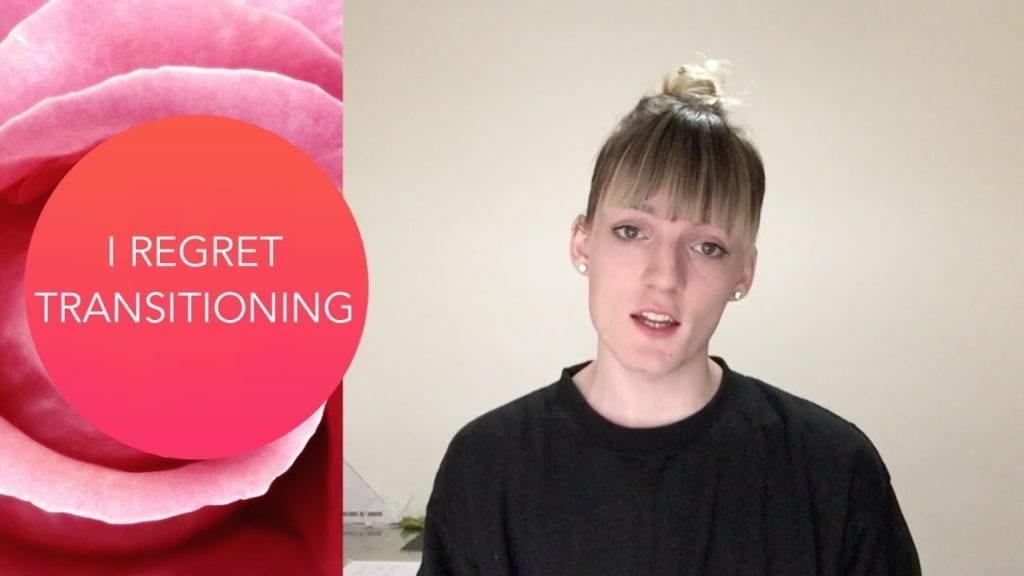 Like a lot of health-related transgender issues, there is not enough information on how often individuals report post-surgery regret, though stories are becoming more and more common. However, some doctors have reported that patients are returning to them in the months or years following their surgeries, asking to have as much reversed as possible.

Of the few studies actually performed, around one in 20 transgender people are believed to have suffered from post-surgery regret. Some individuals report the influence of hormones being a driving force behind their rash decision to have the surgery, with others complaining of a lack of available therapy, which they believed might have convinced them to avoid going under the knife.[5]

For those suffering from gender dysphoria, there are a handful of options out there. They range from simply dressing as their preferred gender to simply taking hormone replacement medication. The most extreme option is sex reassignment surgery but it is not available to many people because it can be prohibitively expensive. Firstly, nearly all insurance plans do not cover the surgery or will only cover a small portion of the costs.

Secondly, the costs can be astronomical, with some studies putting the price tag at over $100,000. Therefore, many transgender people will often only undergo part of the surgery, with some resorting to extreme measures, such as chest-binding, to ensure they look as close to their preferred gender as possible.[6] 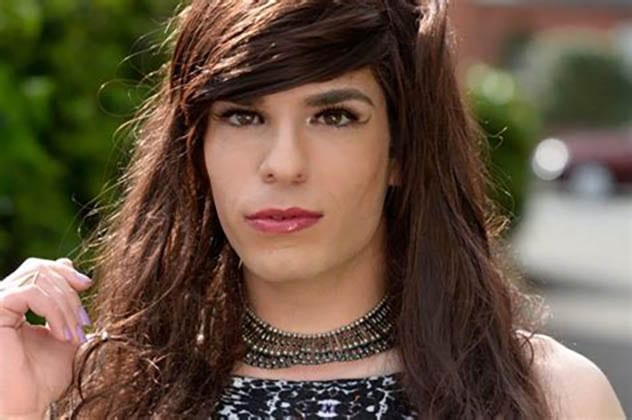 Again, there has not been many studies between heterosexual men and transgender women. Of the few performed, they have had some enlightening conclusions; chief among them, some men don’t consider themselves to be gay if they sleep with a transgender woman, even if she hasn’t completed the surgical side of the transformation.

Anecdotal evidence abounds, with men more and more likely to come out in regards to their attraction to transgender women. For a more scientific approach, studies have shown that the only thing that really matters to some men is that they outwardly look “feminine”. In one study, most of the men admitted to simply pretending their sexual partner didn’t have a penis, usually performing acts which kept it hidden from view.[7] 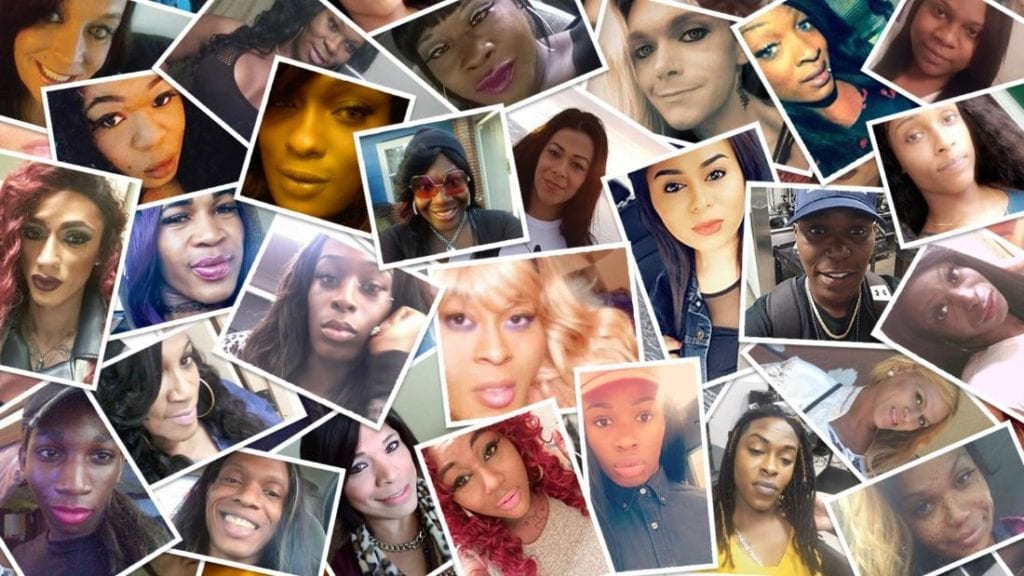 As for why black people are seemingly more prone to suffering violence, it can be chalked up to the fact transgender black people just have more avenues in which they face discrimination. Whether it is because of their gender, their sexuality or their race, there are just simply more reasons that people choose to attack them. In fact, some studies have shown as many as 10% of transgender people reported having been physically attacked in the past year.[8] 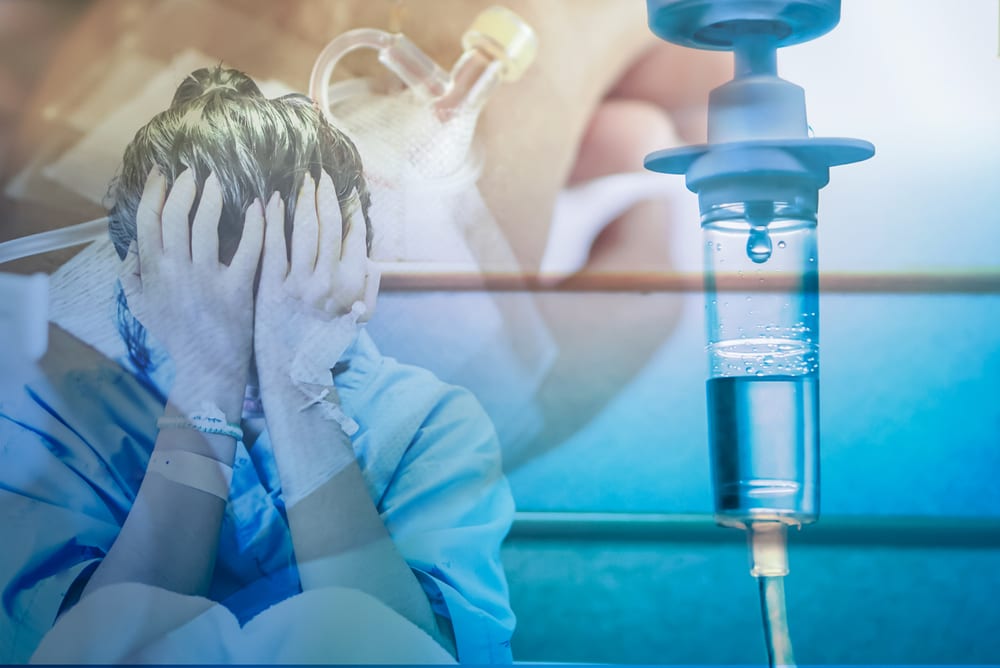 Though every surgery carries risks of some kind, sex reassignment surgeries pose their own problems. The most commonly reported issues center around the bladder or urethra. Given the complexity of either operation, whether male-to-female or reversed, it shouldn’t be surprising that urinary complications are common. One study in 2017 came to the conclusion that just over 33% of transgender people complained of that specific medical problem alone.

Optimistically, some studies have shown that increased experience and specialization by doctors has led to a decrease in surgical complications. However, even that study showed as many as 11% of patients needed additional unplanned operations due to extensive bleeding in the surgical site, though it was only looking at male-to-female surgeries.[9] 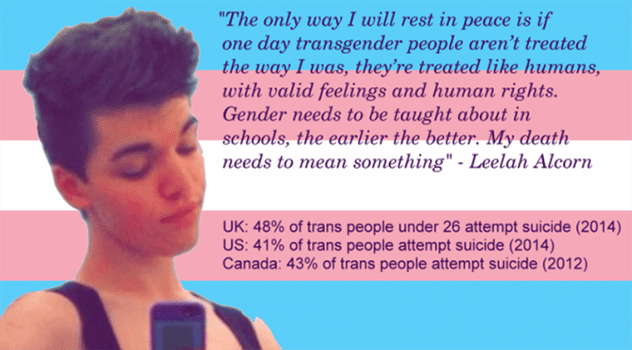 Whether looking at adults who identify as transgender or teens who say the same, one thing stands out: they are much more likely to attempt to kill themselves. Whether its self-esteem issues related to their gender dysphoria or bullying which some transgender people suffer from, as many as 43% of them have reported they had attempted suicide at least once in their life.

In regards to the bullying or violence, nearly 30% of teens reported in one survey they felt unsafe when traveling to or from school, with almost the same number saying they had been sexually assaulted. When it comes to other LGBT people, transgender individuals are nearly two times more likely to either think about or commit suicide. For comparison, only 5% of straight male teens reported attempting suicide, with 10% of straight female teens reporting that.[10]

A Final word from JFrater: Listverse readers are rational and fair in their debate. If you are not a regular commenter here but wish to start now, please follow the lead of our regulars and be respectful in all your discussions in the comment section below. You will find that the same courtesy is offered in return and we will all be enriched by each other.

For more lists just like this, check out 10 Cases Of LGBTQ+ Persecution That Will Horrify You [DISTURBING], and 10 Enlightening Facts About Gay And Trans People.