McDonald’s is an American staple. Almost every town has at least one and many have upwards of three. It’s even spread and branched out to become a worldwide brand!

It’s in our movies, our books, the ads are everywhere, it’s one of those brands that’s woven into the fabric of everyday life to the point that we don’t even notice the product placement anymore when it pops up in a show.

It’s so ingrained in our culture that it’s considered, consciously or not, to be a safe and familiar place, with its bright lights, colorful mascots, and 24/7 availability. Underneath that cheerful, safe veneer, however, beats the same sort of danger you can find everywhere else, and the terrifying possibility of being murdered.

The unlucky locations below have all suffered the tragedy of serving up a helping of McMurder. 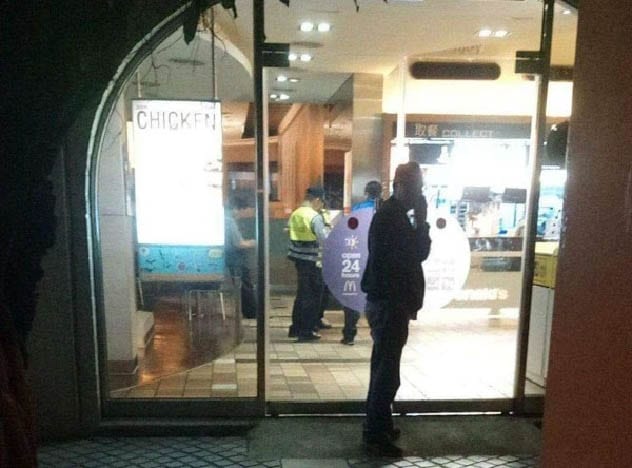 On March 26th, 2018, a McDonald’s customer stopped into a McDonald’s in Tainan City at just past midnight for a quick bite to eat. Finishing his meal, he wandered into the bathroom, only to be confronted with something horrible: a bathroom stall with a rapidly expanding puddle of blood spilling out from under the door.

The authorities were quickly called and opened the locked stall to a gruesome sight: the corpse of a 46-year-old man, an empty syringe, and a scene drenched in blood. The man, identified only as Chiu, had apparently been dead for some time, and was covered in blood from his face to his shoes. Though authorities could not confirm nor deny a murder, the state of the body suggested murder most foul. 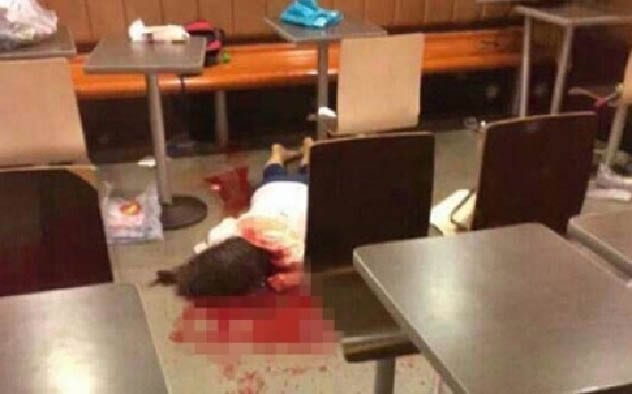 Monday, August 18th of 2014, found Wu Shuoyan in a McDonald’s in Zhaoyuan, China, with her 7 year old son. They sat down to eat, when a group of people (Zhang Fan, Zhang Lidong, Lü Yingchun, Zhang Hang, and Zhang Qiao, and a 12-year-old child) entered the McDonald’s and began to preach.

The group of 6 were from a known Christian splinter cult, The Church of Almighty God, that frequently hold public demonstrations like this. They were mostly ignored. Until, that is, they started badgering the crowd for their phone numbers, in order to contact them later about the church.

Most gave up their numbers, albeit reluctantly, just to get the cultists to leave them in peace. Wu, however, refused, rebuffing several attempts to pressure her into giving over the number. At which point, the cultists became frustrated, and then insulted, and then infuriated.

Wu was reportedly then tied to a chair, accused of being an evil spirit, and beaten to death by the members of the cult, who struck her first with a metal mop handle and then, as they became more furious and frenzied, chairs, and their own bare hands. Wu was left so injured that it was hard to identify her body, as the cult menbers had also knocked her to the ground and stomped on her face, shattering her features.

When questioned, the cult members showed no signs of remorse, claiming that Wu was an evil spirit, and that they also did not fear the law nor any repercussion for their murder, claiming that they have God on their side, and are in direct opposition to “the Great Red Dragon” together. Said Great Red Dragon is, according to Chinese officials, an allegory for the Chinese government, to which the cult is opposed.

The act was recorded on video, and the accused arrested and tried. 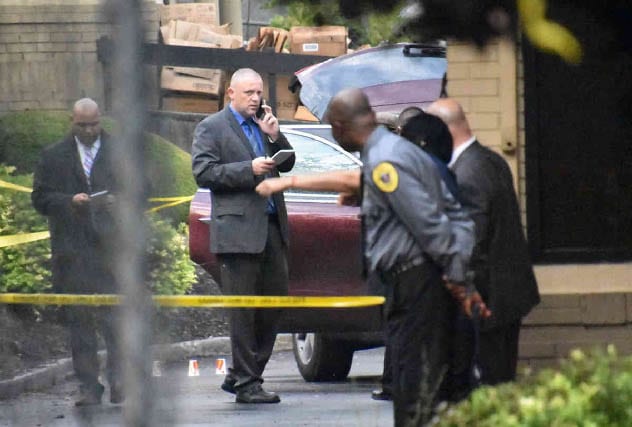 Mob hits are something we usually imagine to be a thing of the past, the sepia-toned 1940’s, a bygone era of blood-red zoot suits, feather caps, Cadillac Series 62s, and tommy guns. Yet, just last year, on June 18th of 2019, a mob hit was carried out in a McDonald’s in the Bronx.

The gunman, reported to be one Bushawn “Shelz” Shelton, was a member of a local gang allegedly hired by Sylvester’s 41-year-old son, Anthony Zottola Sr. to kill his father in order to take control of the ‘family business’—gambling.

Anthony is also accused of making an attempt on the life of his brother, Salvatore Zottola, in an attempt to lure his father out, a single act in a murder plot that apparently spanned years, and included multiple attempts on his fathers life, as well as sending hundreds of texts in film-themed code to his hitman.

The texts repeatedly referred to Sylvester as “the star” and “the actor”, with one allegedly reading “Today was supposed to be the end until the actor wanted to do his own stunts and throw it in reverse in the middle of shooting a scene and drive in the opposite direction.”

Anthony is currently on trial for the murder, as well as several other felonies in connection to the murder and the events preceding it. 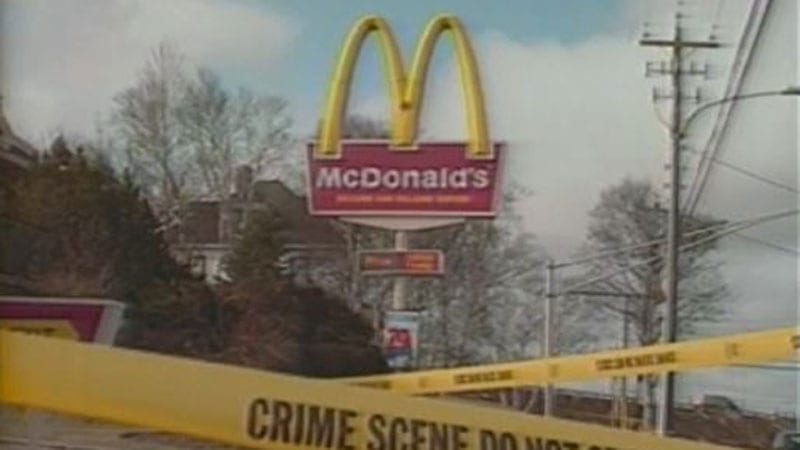 On May 7th, 1992, in Halifax, Nova Scotia, three young men (Derek Wood, 18, an employee of the restaurant, Freeman MacNeil, 23, and Darren Muise, 18) broke into a Halifax McDonald’s after closing with the intent to rob it. Unfortunately for everyone involved, however, there were still employees inside when the break-in occurred.

James Fagan, 27, Donna Warren, 22, Arleen MacNeil, 20, and Neil Burroughs Jr., 29, where closing up shop when the three men broke into the fast food restaurant. The men reportedly didn’t hesitate much before drawing their weapons and opening fire.

James, Donna, and Neil were killed almost instantly, but Arleen, who was shot in the head, survived to testify against the men, although she was left permanently disabled by brain damage. The robbers then looted the register, making off with a measly 2,017 dollars.

The three robbers were caught, convicted, and sent to prison, although as of 2020, at least two are out on parole. Muise, who admitted to being the one to kill Fagan, was released on parole in 2012, and at last check lives with his girlfriend in lower British Columbia, “stable and financially secure” according to the parole board.

Freeman MacNeil was awarded day parole, while Wood was denied it twice on appeal. 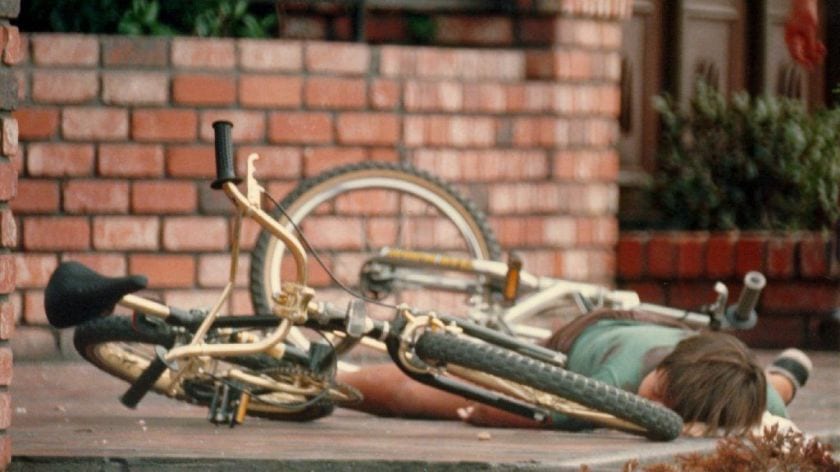 July 18th of 1984 saw one of the deadliest, most gruesome shootings in American history happen in a San Ysidro McDonald’s. Over the course of an hour and 17 minutes, James Oliver Huberty rampaged through the small restaurant, killing 21 people and injuring 20 more.

With no apparent motive, and no spoken cause, Huberty spent the little more than an hour inside the McDonald’s repeatedly firing into bodies both living and dead, attempting to kill everyone in the restaurant and parking lot.

Rescue workers and cops were no exception to the rule, as Huberty fired upon them as well the moment they crossed into the parking lot, shots pinging off the cars and fire engines, even the ambulances.

Then, as suddenly as it began, it was over, as one officer managed to get off a careful shot and strike Huberty dead center of the chest, killing him instantly. The 20 people still alive inside were taken to the nearest hospital for emergency treatment.

Although the McDonald’s no longer stands, a monument to the victims is still displayed in the town, in remembrance of the 21 dead and 20 injured in the shooting.

For more lists like this, check out 10 Outrageous McDonald’s Scandals, and 10 Things You Never Knew About McDonald’s