Anything in life can become haunted. From houses to people to patches of land to toys, ghosts will attach to anything in their power to affect. This apparently includes retail stores!

Across the US (and England, apparently), retail stores like Walmart, Target, Sam’s Club, etc have all been the target of hauntings, whether from bad choices in placement or from strings of awful murders happening on the property. Ghosts of all ages and types, from benevolent to malicious, have started running amok in stores like a bad Ghostbusters remake.

The good news is that we now have a list of the 10 most haunted stores, so you can avoid them in future shopping sprees…or go to them on purpose, if you’re hunting more than just bargains. 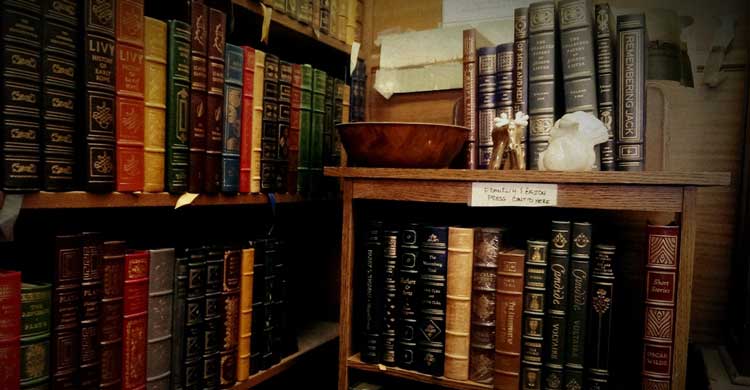 In Detroit, Michigan, there’s no shortage of possible hauntings. In fact, you’d probably expect many places there to be haunted, given the amount of ruined buildings, abandoned factories, and the murder rate of almost a murder per day.

The most notable haunting in Detroit’s retail sector, however, seems to be the ghost that haunts John T. King Used & Rare Books. The store, standing four floors tall, housing over 1,000,000 books separated into 900 categories, is also home to a couple of ghosts!

The first ghost is reportedly a man who killed himself on the third floor of the glove factory in which the book store is now housed, after suffering heartbreak from being rejected by a coworker. He is supposedly responsible for many sightings, cold spots, and echoing footstep-like sounds in the building, and was authenticated by a psychic.

The second ghost was acquired alongside many books bought from the estate of a murder-suicide victim. Although not dangerous, the ghost reportedly annoys employees by generating cold spots and knocking scores of books off the shelves. 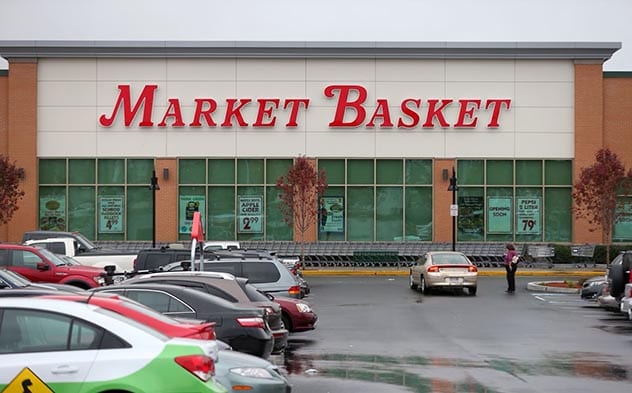 In Wilmington, Massachusetts, there’s a grocery store known as the Market Basket. This store is the employer of one Christina Bush, a 25 year old psychology major who has worked for the company since she was 14. Christina didn’t believe in ghosts, not had she ever seen anything weird in her local store, until March of 2019.

While standing at the bakery counter, ringing up another customer, Christina reportedly looked up and saw an elderly woman in a white nightgown and haircap standing, barefoot, a few feet away, staring at her. She looked down at the counter, then quickly back up…and the woman had vanished.

Startled, she searched the store for the woman, but she had vanished without a trace. Independent research into the situation by Christina turned up few clues, although others responded to her questions saying they had seen similar apparitions in the store, and one woman claimed to have seen that exact ghost in her own home, just a few blocks from the store! 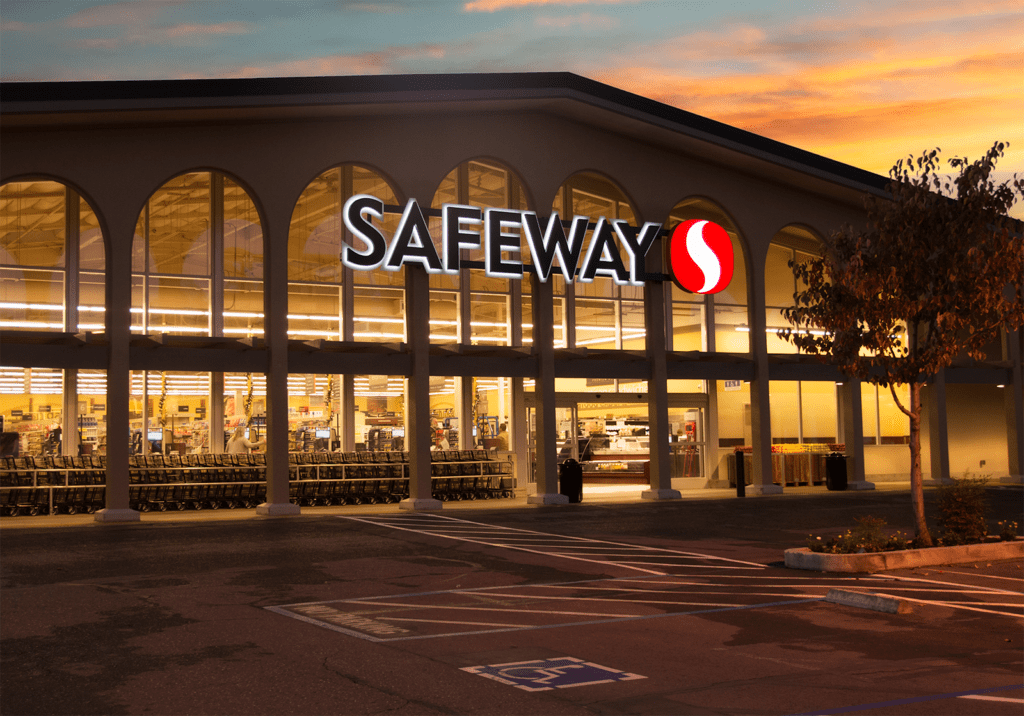 The San Francisco Bay Area is no stranger to hauntings, but perhaps the oddest haunted place is the local Safeway in the Sunset District. Safeway, a national grocery chain, is best known for the jokes about their terrible house-brand ice cream, but now might be known for other reasons: GHOSTS!

The San Francisco Safeway is haunted by at least one incredibly eerie ghost, a little boy, about 8 years old. Appearing mostly at or around midnight, the child has been seen by multiple employees, usually sitting on the floor curled in the fetal position, or standing in a corner facing a wall, with his face hidden.

The Safeway was supposedly built on the site of an old hotel which was burned to the ground for insurance money. It’s unknown if the boy perished in the flames, or if he was there long before that. While his origins remain a mystery, his presence is a concrete fact to those who have seen him. 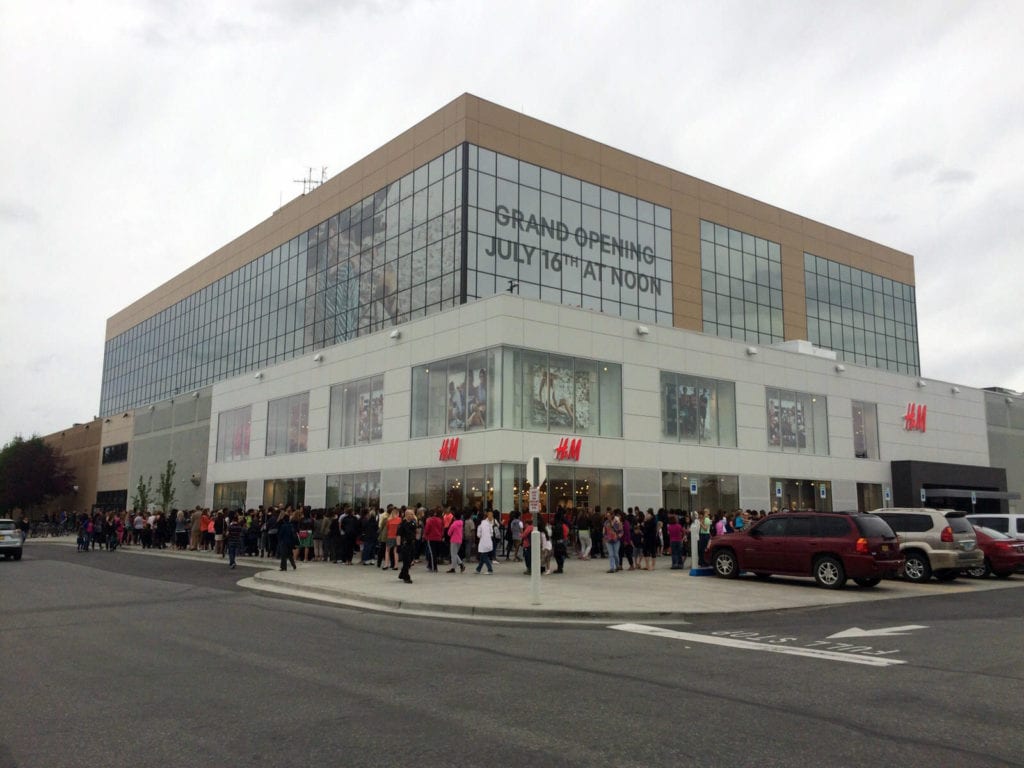 In Anchorage, Alaska, the Dimond Center mall is a point of some contention. Although few dispute the notion that it is in fact haunted, the arguments come from how it came to be haunted in the first place.

Many people claim that the mall was built on a burial ground, the construction stirring up restless spirits. Others assert that no such burial ground could have existed, as the area was barren and layered with hard permafrost before the mall was built, thus the ghosts have to be from the many deaths at the mall (from things such as aneurysms, shootings, and Freon leaks).

They do seem to all agree, however, that the ghosts are mostly found lurking in bathrooms and hallways, and that the three most frequently sighted are The Woman, who supposedly died while mall walking, The Tall Man, and The Child. It might be worth a look if you’re ever in Alaska! 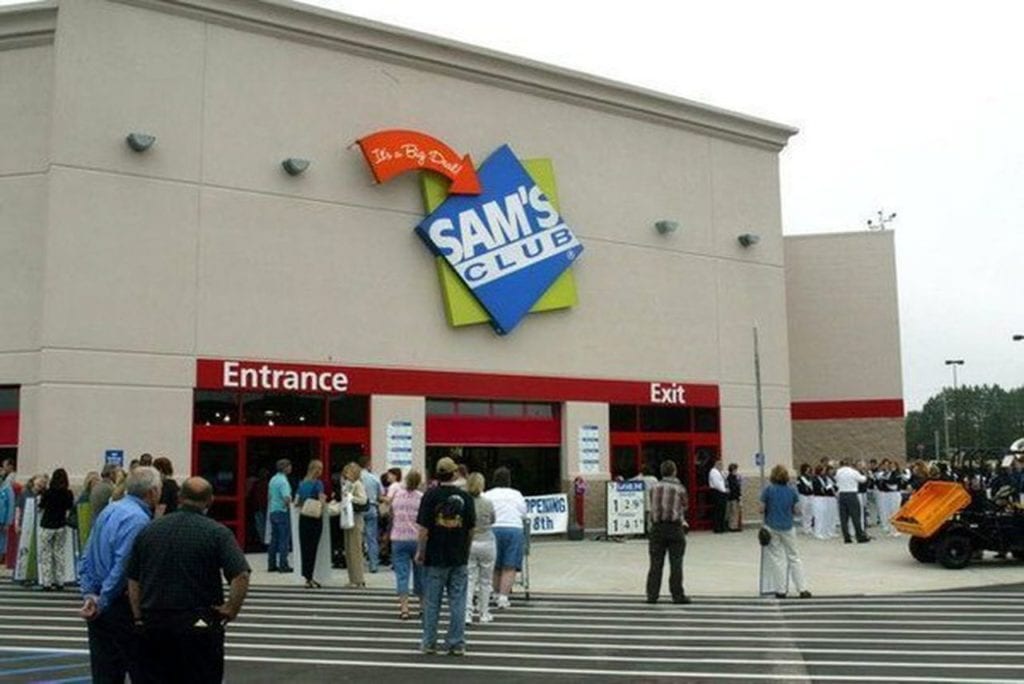 Oxford, Alabama made a tragic and highly cursed mistake in 2009: letting Walmart build a Sam’s Club in their town. This in and of itself would not normally cause too many problems, but this particular Sam’s Club decided to take up residence over an area that required them to bulldoze Native American cultural mounds, using the dirt as foundation fill.

Former mayor of Oxford, Leon Smith, insisted that the mound “ain’t never been a burial ground” and was a natural formation and at most used for “smoke signals”. The fact that the construction was plagued by disasters like a sinkholes and severe economic troubles didn’t seem to bother the people in charge of the project at all, as they plowed ahead with destroying the rock and dirt mound, while the Mayor took to claiming he was “full blood Indian” in an attempt to stave off criticism ( Mayor Leon was decidedly not Native American).

Although the store itself has not much Poltergeist-like activity since construction, the numerous setbacks and unfortunate accidents during construction suggest that the land is definitely haunted, and possibly cursed. 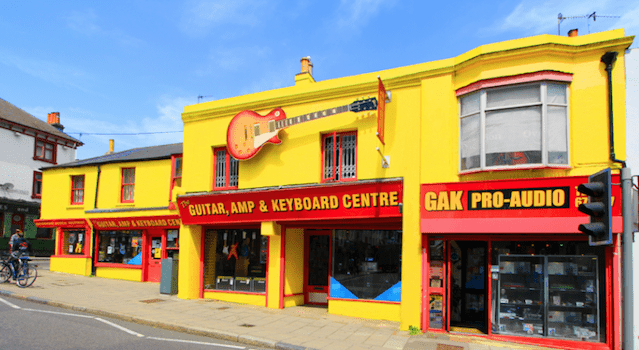 Brighton, England has its fair share of ghosts, as does all of Britain, but a personal favorite is the rock and roll ghost of Guitar, Amp and Keyboard. The ghost has been caught on video at least twice being a spooky little devil and messing around with customers and merchandise in the store.

One video shows the ghost appearing as a full body apparition and striding towards a customer, who doesn’t notice it at all. The second, taken while the store was closed, shows the ghost (now invisible) rattling the guitars and pulling a price tag off of a Fender, throwing it to the ground.

Although their could be logical explanations for the moving guitars and snapping price tags, I can’t seem to think of any, nor could the store owners. Perhaps the ghost of a frustrated rock star stopped in for one last great performance on their way to the ferryman. 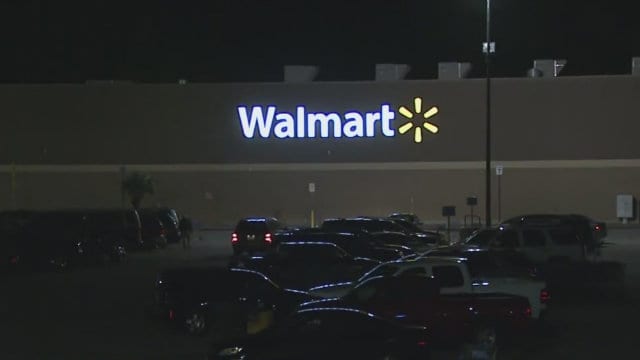 Galveston, Texas, much like Brighton, has no shortage of ghosts and ghouls haunting its fair city. None have quite the impact, however, of the ghosts in the Seawall Walmart.

Built on the former site of St. Mary’s Orphan Asylum (good lord, Walmart, have some restraint in picking cursed locations to build!), the Seawall Walmart has been plagued with hauntings from the start of construction. St. Mary’s, destroyed in the hurricane of 1900, saw the deaths of 90 children and 10 nuns, 100 dead at one blow, that’s got to be enough bad energy to curse the land it stood on for at least 200 years.

And apparently it has, as the Walmart has several ghosts reported to be within its walls. The most notable is a child who cries out, heartrendingly, for its mother. The other ghosts mainly giggle and, if the employees are to be believed, play with and even steal pallets of toys! Personally, I think they’ve earned the right. 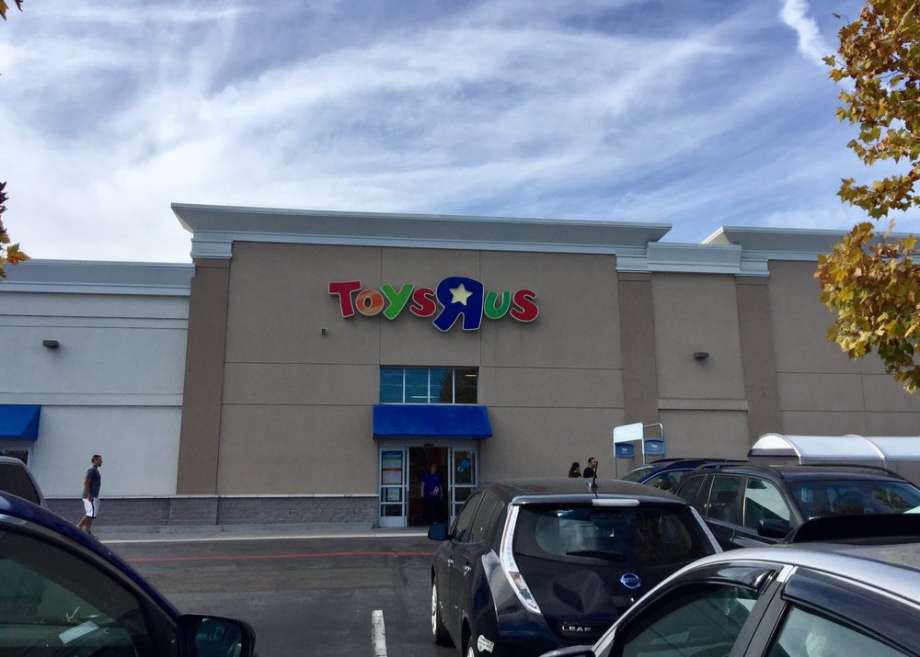 Ah, California, the land of sun, beaches, and apparently ghosts! A favorite being the ghost of the Sunnyvale Toys “R” Us, a ghost by the name of Crazy Johnny.

According to legend, Crazy Johnny was a preacher employed by one Martin Murphy, who owned the land the Toys “R” Us was built on. Crazy Johnny, who was supposedly suffering from encephalitis, was in love with Martin Murphy’s daughter, Elizabeth.

Elizabeth, however, was in love with a lawyer, and planned to marry him. Crazy Johnny was so upset by the news that in his grief and rage he lost his grip on the axe he was using to chop wood and struck his leg, severing the artery and bleeding out in minutes.

Of course, he didn’t quite stay down, instead reportedly rising as the famous ghost of the Sunnyvale Toys “R” Us, opening and closing doors, whipping papers around, whispering over the intercom, and frightening several psychic investigators. 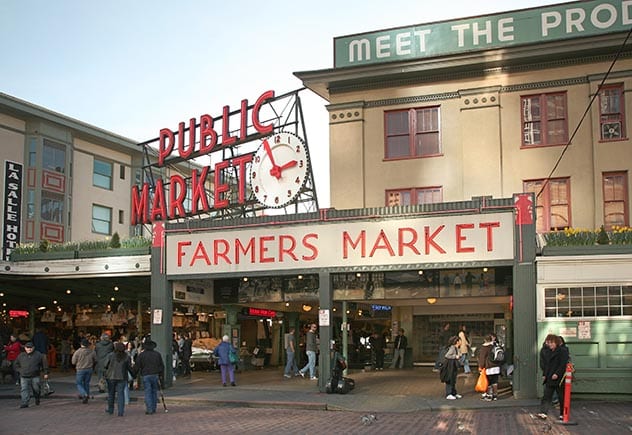 Seattle, Washington boasts that it contains the most haunted location in the entire state, and it very well might! Home to at least 5 distinct ghosts, the Pike Place Market is full of knocks, cold spots, and things that go bump in the night.

From the sightings of Princess Angeline, an elderly Native American woman with a red scarf and basket, to Jacob, a young boy who haunts the bead shop, the ghosts all have distinct personalities and living identities.

One of the ghosts, Nora the Psychic, is said to inhabit a crystal ball in Shiela’s Magic Shop, and moves the inventory through all hours of the night! 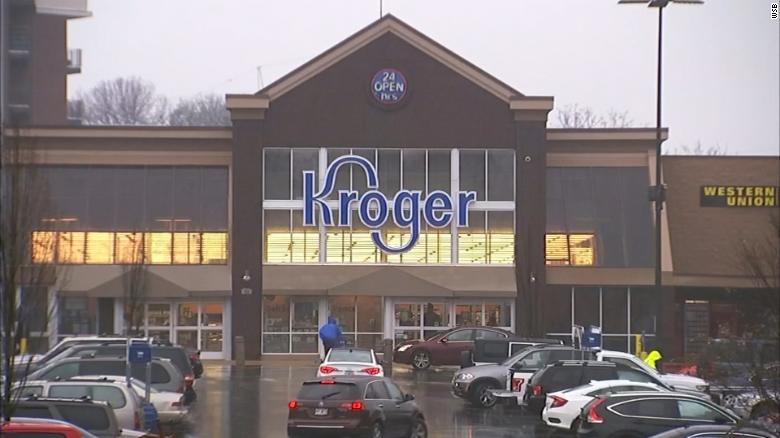 Atlanta, Georgia may not be the most haunted town in the state (that honor goes to Savannah, Georgia instead), but it does have the most unique hauntings. No civil war ghosts or lingering spirits of the Victorian era here, instead Atlanta hosts the infamous Murder Kroger.

Murder Kroger, as its name suggests, has been the site of at least 4 murders since 1991. The first, Cynthia Prioleau, was shot in the parking lot. In 2002, a dead body was found in a car in front of the Kroger, followed by a murder in a building which shared the parking lot with the unfortunate Kroger, and then yet another shooting in 2015.

Though no one had been able to provide evidence of ghost, many residents of the neighborhood surrounding the Kroger have reported that the entire place has a nasty energy to it, a feeling of anger.

Or did, until they tore it down and put up another Kroger in its place in late 2019. The new Kroger, with a roof covered in grass and beehives, has inherited the nickname, but supposedly not the bad juju…yet.

For more lists like this, check out Top 10 Cursed And Haunted Household Items, and 10 Surprising Facts About The Haunted House Industry.