Neiman Marcus is the first American department store to go bankrupt during the coronavirus shutdown. “Prior to COVID-19, Neiman Marcus Group was making solid progress on our journey to long-term profitable and sustainable growth,” said CEO Geoffroy van Raemdonck in a statement. “However, like most businesses today, we are facing unprecedented disruption caused by the COVID-19 pandemic, which has placed inexorable pressure on our business.”

Macy’s relies heavily on its brick-and-mortar stores and furloughed 125,000 workers during the first two weeks of the shutdown. J.Crew filed for bankruptcy at the beginning of May. JCPenney and Lord & Taylor are reportedly considering bankruptcy as well.

But the pandemic is really just one more nail in the coffin. These businesses were struggling well before the stay-at-home orders went into effect. A recent report from S&P Global Market Intelligence revealed that department stores are considered more at risk of defaulting on their loans than any other consumer sector: their odds of default over the next twelve months is 42 percent.

In 2017, Credit Suisse estimated that 20 to 25 percent of malls would close between 2017 and 2022, mainly because anchor stores like Macy’s, JCPenney, and Sears were closing.

While Neiman Marcus has not yet revealed whether it plans to close stores, many well-known brick-and-mortar stores have done just that. In 2019, major retailers closed more than 9,300 stores (up nearly 60 percent over 2018). Ten years from now, many household names may be a thing of the past. Here’s a look at once-popular stores that went out of business (or soon may). 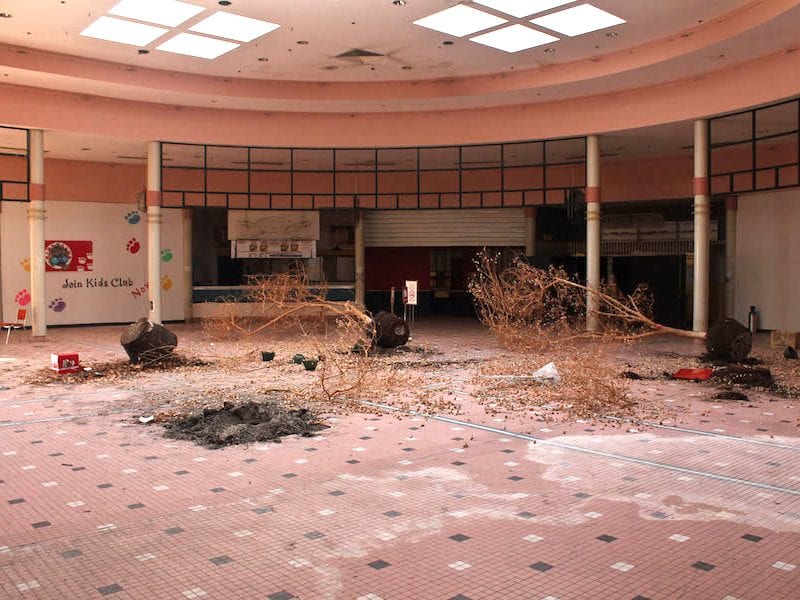 Department stores have long defined retail shopping. They’re the anchor stores within shopping malls. They take up the most real estate within suburban strip malls and on city retail blocks. But they’re heading for extinction.

Marshall Field’s was founded in the 19th century, and Hecht’s Department Store was founded in 1957. Macy’s purchased both brands in 2005 and converted or closed all of the stores. The following year, Macy’s retired the Kaufmann’s department store brand. But, as noted above, Macy’s (founded in 1929) faces major struggles of its own. It plans to close 125 stores over the next three years.

Bon-Ton stores (including its subsidiaries Bergner’s, Boston Store, Carson’s, Elder-Beerman, Herberger’s, and Younkers) were liquidated in 2018. As a result, 256 stores were closed.

Filene’s Department Store, a Boston-based store founded in 1881, went bankrupt in 2009. None of its brick-and-mortar locations remain. And California-based Mervyn’s was founded in 1949 and had nearly 200 locations at its peak. In 2008, the company declared bankruptcy and closed all of its stores.

Two major department stores, Sears and JCPenney, are hanging on, but they’re in trouble. Sears (along with KMart) have closed more than 3,500 stores and cut about 250,000 jobs in the past 15 years. It filed for Chapter 11 in October 2018 and began closing stores. It was acquired by Transformco in February 2019, which announced that fewer than 200 Sears and KMart stores will continue to operate.

JC Penney had more than 1,100 stores in 2010, but its declining sales forced it to close a good portion of them. The retailer has not reported a quarterly sales gain since the 2017 holiday season. (2019 holiday same-store sales dropped 7.5 percent.) Six stores closed in early 2020. The coronavirus ultimately proved too much to take and this month JC Penney finally filed for bankruptcy.[1] 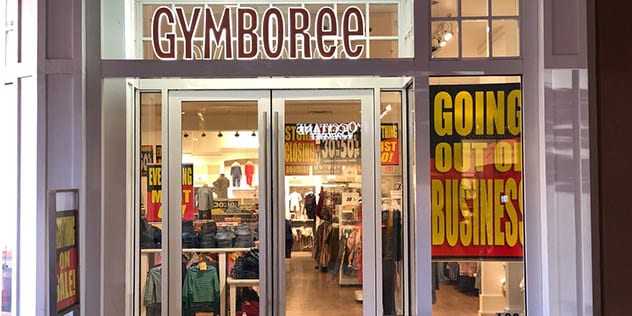 As noted above, department stores–those that sell apparel items for every member of the family–are not doing well. But neither are many clothing-only stores.

Filene’s Basement, an off-price store that started in Filene’s department store, closed all 20 of its locations in 2011. The Limited abruptly shut down all 250 of its stores in 2017. And, in January 2019, after 123 years of business, Henri Bendel closed all 23 of its stores.

Charlotte Russe, a women’s clothing chain founded in the mid-1970s, closed more than 500 stores in April 2019. Avenue, a plus-size women’s clothing retailer, closed 222 stores in August 2019. In the same month, San Antonio-based A’Gaci closed all 54 stores. And luxury department store brand Barneys New York, which was founded in New York City in 1923, ceased operations February 2020. DressBarn announced that it will close all 650 store locations as the chain was “not operating at an acceptable level of profitability in today’s retail environment.”

Steve & Barry’s, which sold inexpensive sportswear for teens, closed all of its stores in 2009. Gadzooks, another teen clothing store, opened in 1983 and filed for bankruptcy in 2005, when it was purchased by Forever 21, which then closed all of the stores. Teen apparel store, Wet Seal, permanently closed stores in 2017 and now sells online only.

Gymboree, a chain of clothing for babies and kids, closed 400 stores under Chapter 11 protection in 2017. In January 2019, the retailer filed again and this time shut down all (more than 800) of its Gymboree and Crazy 8 stores. (Gymboree merch is now being sold by its former rival, The Children’s Place.) Premium children’s brand Peek Kids closed its stores when parent company Charlotte Russe (above) went out of business. The brand is now being sold only by new owner Mamiye Brothers Inc. 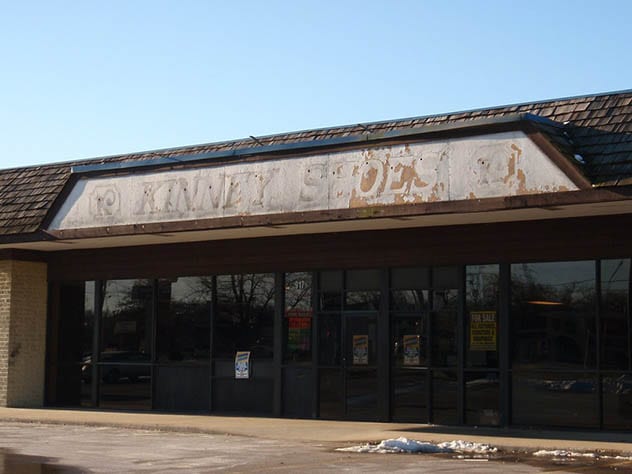 Brick-and-mortar stores that specialize in shoes are hurting. They’re feeling the same pinch that clothing stores are, and they’re competing with online powerhouses like Zappo’s, Shoe.com, and Amazon.

Take Kinney Shoes, for example. The store, which opened in 1894, had 467 stores at its peak. All of them closed in 1998. In the 1960s, Thom McAn had more than 1,400 Tom McAn stores. The chain closed in 1996, but the brand is still available via other retailers. In February 2019, Payless ShoeSource filed for bankruptcy and closed all of its 2,500 stores in one of the largest retail liquidations in history.[3] 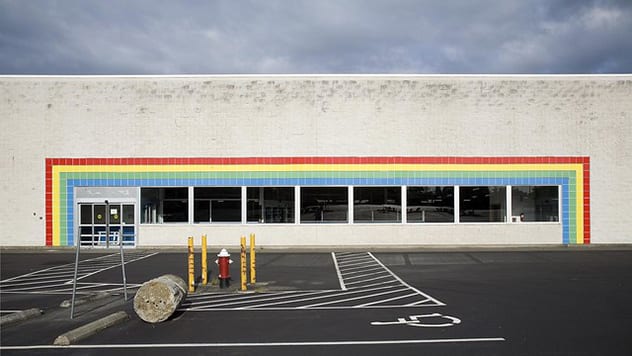 How quaint it is to picture children peering into the colorful window of the downtown toy store! But the reality is that toy stores are simply not popular anymore. It’s not that kids aren’t playing, it’s more about what they’re playing with and how they acquire their toys. Gaming and electronics are huge even among the very young, leaving little interest in toy trains, wooden puzzles, and babydolls. And much of what kids play with can be streamed digitally.

The iconic FAO Schwarz toy store was prominently situated on Fifth Avenue in New York City. The retailer closed in 2015 but reopened three years later in a new location in Manhattan. Other toy stores were not as fortunate. 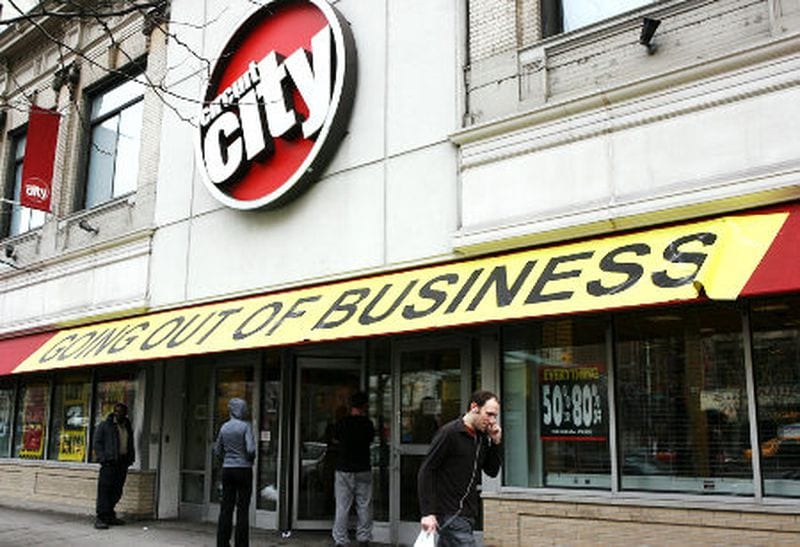 While kids and adults favor electronic entertainment to any other, the stores that sell the stuff aren’t immune to the retail apocalypse. Media Play, which opened as a big-box version of Sam Goody (see below), closed for good in 2006. Electronics chain Tweeter started in 1972 but closed all of its stores in 2008. Circuit City closed 567 stores in 2009. CompUSA, a chain founded in 1984, lost its last store in 2012. Sharper Image sells merchandise via its website, catalog, and third-party retailers, but it no longer has any stores.

And now that video games are so easy to download, players don’t have to go to a store to buy them. That’s a problem for GameStop, which has more than 5,700 locations across 14 countries. The company experienced major losses and sales drops over the past couple of years and closed nearly 200 stores in 2019. And CFO James Bell warned of a “much larger tranche of closures of the coming 12 to 24 months.”[5] 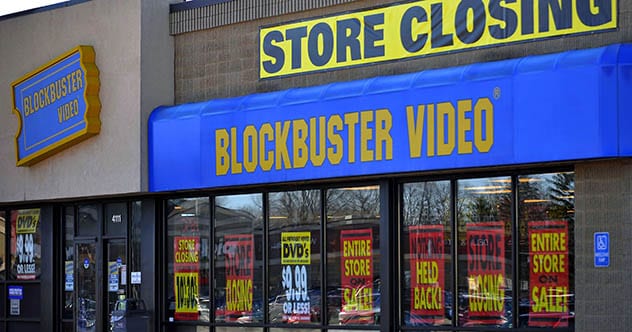 Before consumers could stream movies and music, they browsed for their favorites in actual stores. Much of the younger set has never experienced music in anything but a digital format. Tower Records, one of the largest record stores in the 1990s, closed all of its U.S. stores in 2006.

The first Sam Goody music store opened in the 1940s, but it, too, was unable to compete with evolving music technology. By 2010, its stores had either closed or converted into other brands (like FYE). Hastings Entertainment shuttered all 123 stores in 2017. And Virgin Megastores, king of the CD market, closed all U.S. locations in the same year.

Fifteen years ago, the video rental store Blockbuster had more than 9,000 stores and changed the way people watch movies. But long before Netflix changed it again, Blockbuster suffered, filing for bankruptcy in 2010. Now, only one Blockbuster store remains: in Bend, Oregon.[6] 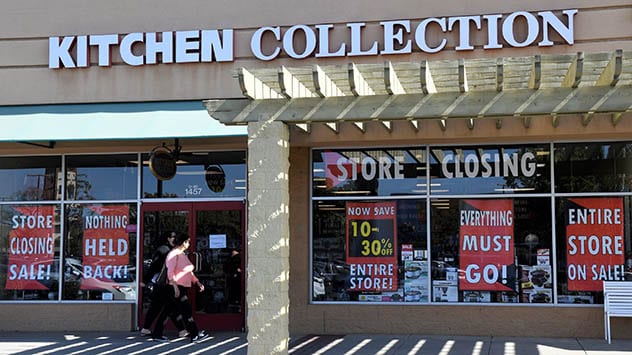 Despite HGTV’s positive impact on the home improvement and home decorating businesses, furniture and home goods stores are not safe from the retail apocalypse. Levitz Furniture was founded way back in 1910, but it closed all of its stores in 2008. Linens ‘n Things had more than 500 stores in 2006 and zero stores in 2008. (The company still maintains an online presence.)

In October 2019, Hamilton Beach Brands announced that it planned to close all 160 of The Kitchen Collection stores, which sold small kitchen appliances and cooking tools. Craft-store chain A.C. Moore, shut down all of its 145 stores. Parent Company Nicole Crafts is converting about 40 locations into Michaels stores. 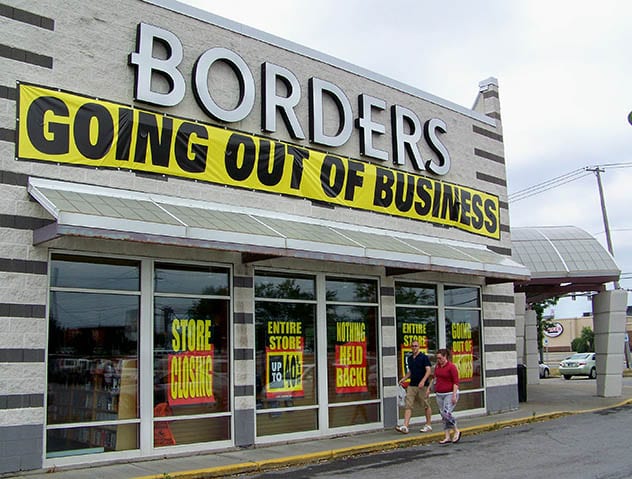 Book store chains negatively impacted smaller, independent bookstores. Then, electronic readers like Kindles and digital audio apps like Audible put a hurting on the chain businesses. In the end, however, e-book sales leveled off, and the physical book did not. What changed was how real books are purchased: not in bookstores, but online.
In 1987, Barnes & Noble acquired B.Dalton Books and officially closed the bookstore in January 2010. Barnes & Noble is the biggest bookstore chain, but it has struggled and closed about 10 percent of its stores since 2011.

Waldenbooks, founded in 1933, merged with Borders in 1994. When Borders liquidated in 2011, all locations of both brands closed for good.

Book World, the 45-store chain founded in 1976, announced its liquidation in December 2017. “Sales in our mall stores are down this year from 30 to 60 percent,” owner Bill Steur told the New York Times. “The internet is killing retail. Bookstores are just the first to go.” It was Amazon that replaced Book World as the fourth-largest bookstore chain.[8] 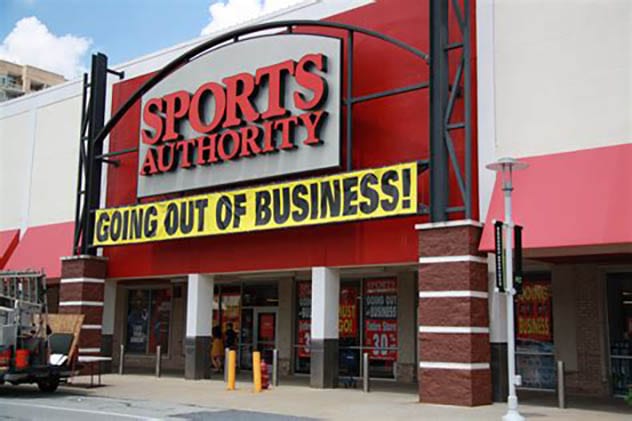 Even in retail, sports are fiercely competitive.

Oshman’s Sporting Goods was founded in 1933, acquired by Gart Sports in 2001, and rebranded as Sports Authority. Sports Authority, in turn, had more than 200 U.S. locations when competition bankrupted it in 2016. It closed all of them and sold its website to Dick’s Sporting Goods. Dick’s also acquired Galyan’s Trading Post in 2004, Joe’s in 2009, and Golfsmith in 2016.

Sport Chalet, which first opened in 1959, abruptly closed all of its stores in 2016. MC Sports closed in 2017. In 2019, Advanced Sports Enterprises filed for bankruptcy protection and announced the closing of 102 Performance Bicycle stores. Sport retailer JackRabbit purchased Olympia Sports and announced plans to close all 76 of its stores.

And Modell’s Sporting Goods, which opened in 1889 and was the oldest sporting goods chain, announced in March 2020 that it would close all 115 stores.[9] 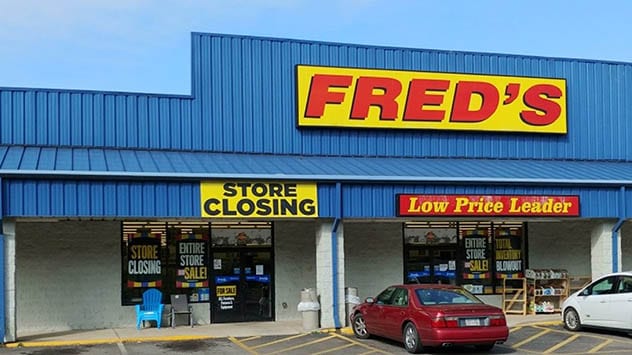 Saving money never goes out of style, but the way consumers shop for bargains has.

And Shopko, which got its start in 1962, offered customers “quality service and low prices.” When Amazon arrived and offered the same thing, Shopko went under. It closed all 371 of its stores in 2019.[10]