Cats may hold the top position in our hearts, but some of them also hold very real job titles. Dogs may be more accommodating to their bosses (and owners), but cats have nonetheless received stellar performance reviews throughout the centuries.

The famous feline attitude simply indicates that they do it for the love of the job, not for treats or recognition. Here are 10 cats that have performed important, unusual, or adorable jobs.

10 Chief Mouser To The Cabinet Office 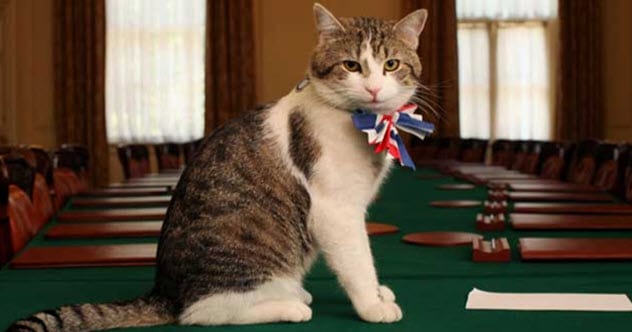 Chief Mouser to the Cabinet Office is a very prestigious position at 10 Downing Street, the official residence of Britain’s Prime Minister. The Chief Mouser title is currently held by Larry, who was recruited from the Battersea Dogs & Cats Home for his mousing resume. He even has an entry on the official British government website.[1]

The position began during the reign of Henry VIII, but records only exist from 1929 onward. Occasionally, the office has been empty for long periods of time when mice have wisely not caused trouble. The cat that held the title the longest was Wilberforce, who served under Prime Ministers Edward Heath, Harold Wilson, Jim Callaghan, and Margaret Thatcher. 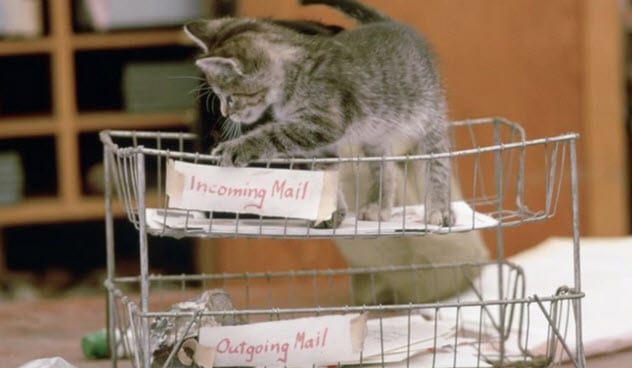 In 1876, the Belgian city of Liege decided that the most efficient way to transport the mail was via cat. The Belgian Society for the Elevation of the Domestic Cat trained 37 volunteers to deliver letters sealed in waterproof pouches tied around their necks. One enterprising individual delivered its mail in about five hours, but the others took up to 24.[2]

On March 4, 1876, The New York Times reported, “It is believed that, unless the criminal class of dogs undertakes to waylay and rob the mail-cats, the messages will be delivered with rapidity and safety.” The experiment was promptly discontinued. 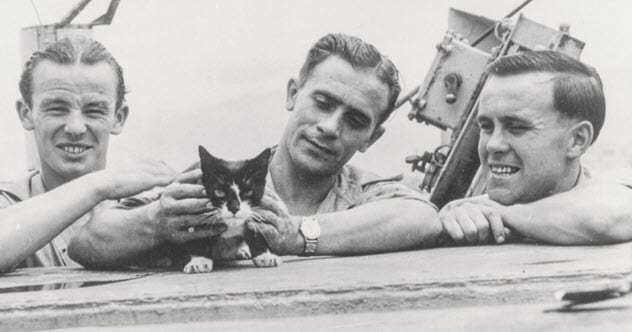 Felines adapt easily to their surroundings. They are excellent at catching mice that bite through important ropes and food stores. This makes cats perfect for life on a ship.

Several cats have been decorated for their naval service. In 1941, “Unsinkable Sam” started out on the German dreadnought Bismarck and was found on the wreckage of the sunken ship by the HMS Cossack. After the Cossack was torpedoed, Sam was transferred to the HMS Ark Royal, which was also torpedoed. He then rightfully retired from military service.[3]

Pooli, another World War II cat, was awarded three service ribbons and four battle stars for her work on an attack transport. In 1949, Simon protected the stores of the British HMS Amethyst during a 101-day siege. He is the only cat to be awarded Britain’s Dickin Medal and was buried with full military honors. 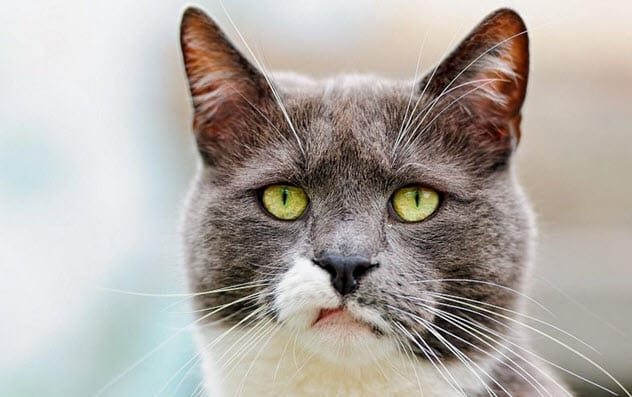 In the 1960s, the Central Intelligence Agency attempted to train cats to spy on Soviet embassies. The program, Project Acoustic Kitty, funded operations to implant microphones, transmitters, and antennae into cat’s bodies to secretly record conversations. The cats were then trained to follow orders, which proved to be much harder.[4]

In the first mission, a female cat was taken to a public park and told to record a conversation between two men on a nearby park bench. While crossing the road, she was hit by a taxi and killed instantly. The CIA concluded that the project was “not practical.” 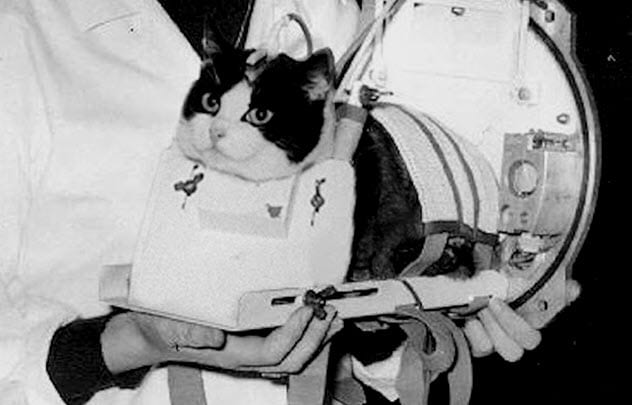 By 1961, the French space program had successfully launched rats into Earth’s atmosphere. Then they decided it was time to go bigger. What better animal to follow rats than cats?

Fourteen feline candidates were selected for training, which involved a compression chamber, spinning in a high g-force centrifuge, and exposure to rocket noises. During a 10-hour surgery, electrodes were implanted in the selected cat’s brain so the crew could measure its biological responses during the flight.

On October 18, 1963, a tuxedo cat named Felicette was launched in the nose cone of a Veronique AG1. She flew almost 161 kilometers (100 mi) above the Earth, briefly experienced weightlessness, and safely returned via parachute. She is the only cat to survive a space flight.[5] 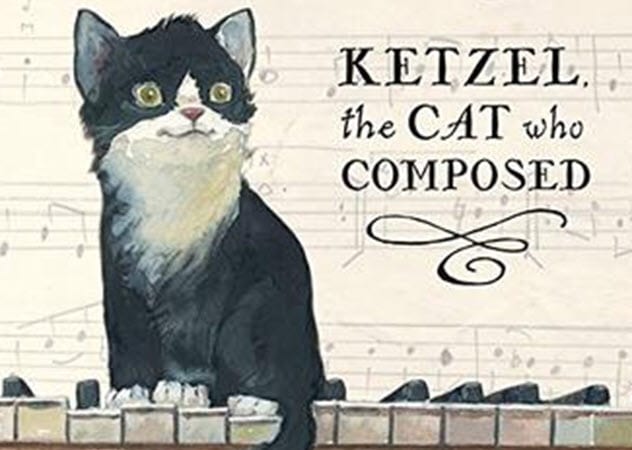 In 1996, Rabbi Moshe Cotel was sitting at his baby grand piano when Ketzel (“cat” in Yiddish) jumped onto the keyboard. She landed on the treble and walked down toward the bass. Cotel, who was chairman of the composition department of Peabody Conservatory, grabbed a pencil and transcribed the notes.[6]

A year later, he heard that the Paris New Music Review was hosting a competition for songs under 60 seconds. He entered Ketzel’s song, which was titled “Piece for Piano: Four Paws.”

The judges, who were not told the title or composer, awarded it an honorable mention. When the piece was performed at the Museum of the City of New York, Ketzel was sitting in the audience and gave a loud meow at the announcement of his name.

Talkeetna, a small town of about 900 people near Denali National Park, had a very unusual mayor: Stubbs, a ginger cat. He came to power in 1998. As the town is a historic district, the role is more symbolic than functional. His mayoral duties included patrolling the town, drinking catnip-infused water every afternoon at West Rib Cafe & Pub, and taking visitors in his “office” at Nagley’s General Store.[7]

But even cats have political opponents. In 2013, Stubbs was brutally attacked by a dog. His lifesaving operation was funded by donations from hundreds of well-wishers around the globe.

Stubbs soon used this positive press to make a failed bid for the 2014 Alaska Senate race. He died peacefully of old age at his home in 2017. No word yet on who will fill the power vacuum. 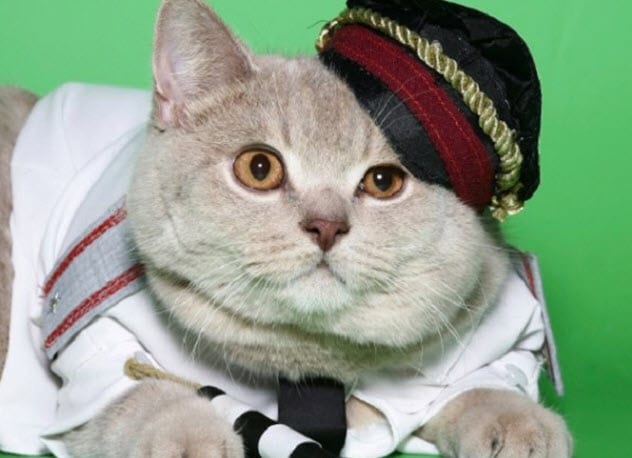 In 2002, a Siamese cat wandered into a customs checkpoint in Stavropol, Russia. He was adopted by the guards and soon took on the duty of searching vehicles for illegally smuggled Caspian Sea caviar.

“One day, Rusik just leapt into the boot of a passing car at the checkpoint and immediately sniffed out some sturgeon,” police officer Sergei Kovalenko said. “After that, we decided to use him all the time in our searches.”[8]

No matter how ingenious a hiding spot the smugglers (often mafia) created, Rusik could sniff them out. After he spent less than a year on the job and put the sniffer dogs out of work, it was clear that the cat was a formidable weapon against sturgeon smuggling.

In 2003, he was run over by a car that he had previously busted for smuggling caviar—a move that many believe was a mafia-ordered contract killing. Rusik was simply too good at his job to live. 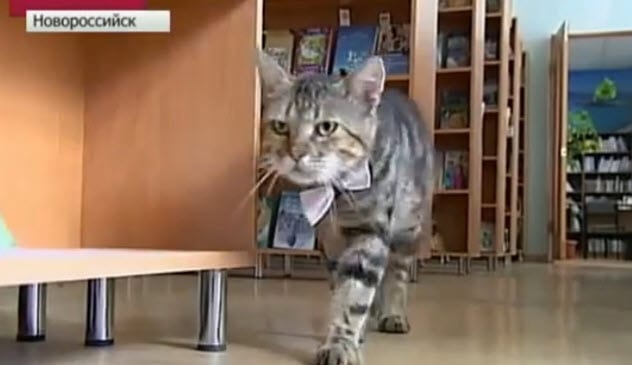 When a striped cat named Kuzya showed up at the Novorossiysk children’s library in 2013, the staff just couldn’t resist letting him in. But for Kuzya to be allowed in the library, he had to be made an official employee. Unfortunately, the Russian government was cracking down on undocumented workers, so no human—or feline—could be hired without the proper paperwork.

The library staff was undeterred. They acquired an animal passport, and Novorossiysk’s head librarian signed a special order that made Kuzya an official library assistant. His wages are 30 cans of Whiskas cat food a month, and he must show up to work in a uniform (a bow tie).[9] 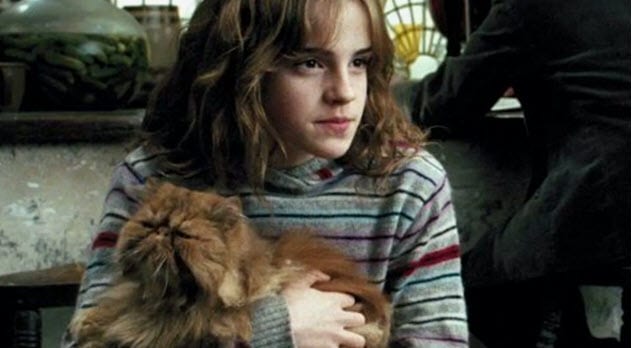 For as long as there has been cinema, there have been movie star cats. However, as the felines are notoriously hard to train, dogs are more popular as costars.

Some cats that have graced the silver screen include Orangey in Breakfast at Tiffany’s (1961), Syn Cat as “Tao” in The Incredible Journey (1963), Ted Nude-Gent as “Mr. Bigglesworth” in Austin Powers: International Man of Mystery (1997), Crackerjack and Pumpkin as “Crookshanks” in Harry Potter and the Prisoner of Azkaban (2004), and Tonic and Leo as “Church” in Pet Sematary (2019).

The PATSY (Picture Animal Top Star of the Year) Awards recognize animal excellence in film. Cats, which are notoriously hard to work with due to their Hollywood personalities, have nonetheless managed to snag quite a few nods.[10]

About The Author: Jackie Mead is a museum educator by day and a writer by night. Her work has appeared on Cracked, HistoryisNow, and History Magazine.